I must admit… it’s sort of weird writing about a place I’ve been to a million times. But here I am, nearly 14 years after starting this website and after 20 years of living nearby, doing just that. Yes, I just went up the hill from my house to take pictures and scamper around the reservoir. Like some sort of tourist. 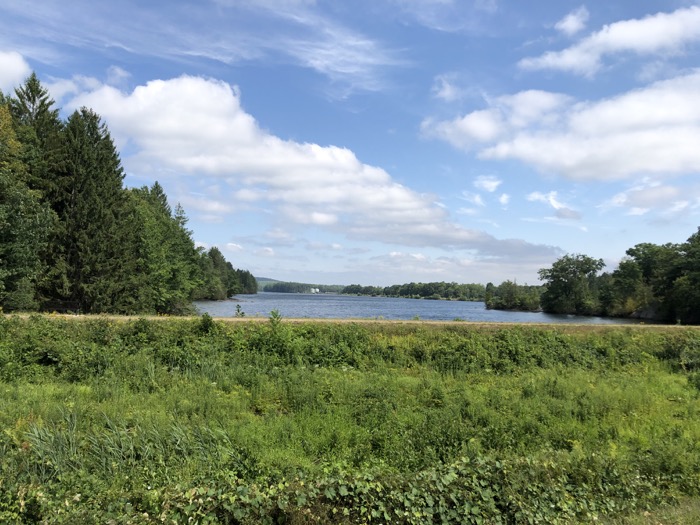 And now, at my fourth West Hartford address in those 20 years, I can walk to the reservoir without seeing route 44. (There is a well-maintained, rather official trail to/from a West Hartford neighborhood road – it’s actually on the map which surprised me a bit.) 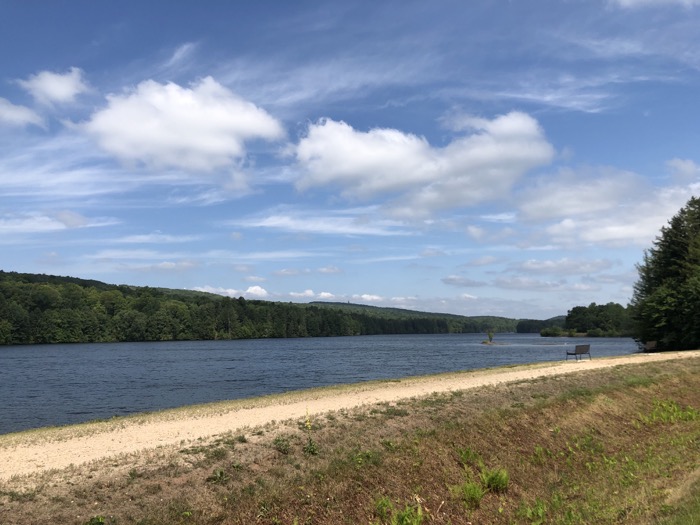 Also on the map is the easement down “the mountain” between the Van Otterloo Preserve and Balbrae. (If, for some weird reason you want to access the reservoir this way, you can.) 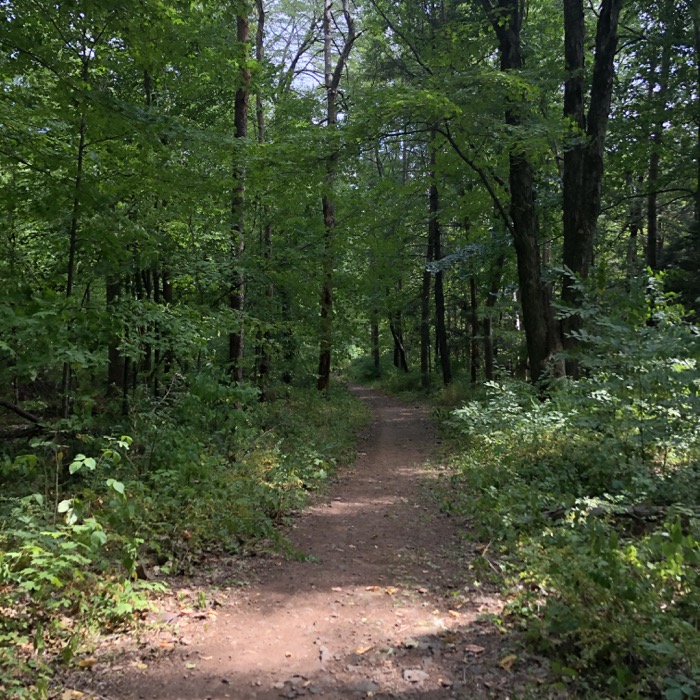 The trail to my ‘hood

With the West Hartford Reservoirs connecting to this one across route 44, runners, hikers, and mountain bikers have free access to thousands of acres of trails and roads, spanning Farmington, Avon, West Hartford, Bloomfield, and Simsbury. The Metacomet Trail traverses the whole thing on its way to Talcott Mountain and Penwood State Parks. 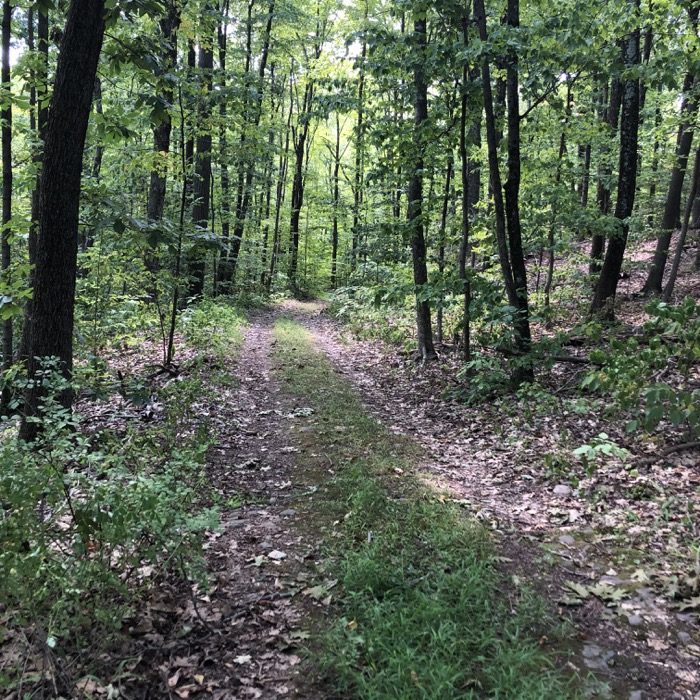 The trail to the Revolutionary War campsite

The West Hartford Reservoirs and Reservoir 6 are the sites of MDC’s water treatment facilities, five small reservoirs and more than 3,000 acres of some of the most beautiful woodlands and trails in the region.

A nature lover’s paradise, the area features 3,000 acres of beautiful forestland; there are more than 30 miles of paved and gravel roads for joggers and bicyclists, hiking trails, wheel-chair accessible picnic groves, cross-country skiing and snowshoeing. 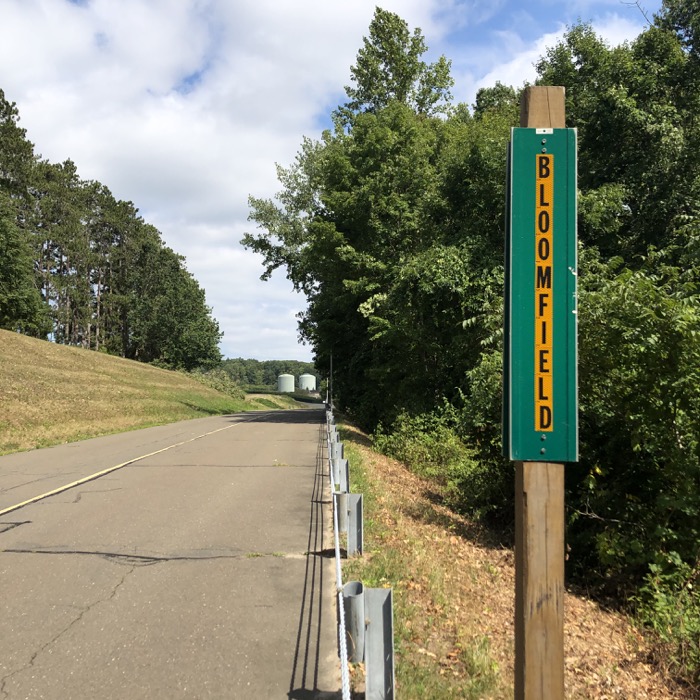 There is a parking lot on route 44 on the West Hartford side of Talcott/Avon Mountain. If you use this and have to head east crossing traffic to go home during heavy traffic times… good luck. Just a word of warning.

The main path at Reservoir 6 is 3.6 miles around. It is a mix of paved road, trail, and graded dirt road. This is what 90% of visitors do, and probably what 90% ever want to do here. Which is fine – it’s a very nice walk. In fact, the Metacomet Trail utilizes the dirt road along the water for a mile and a half before heading up to Heublein Tower. 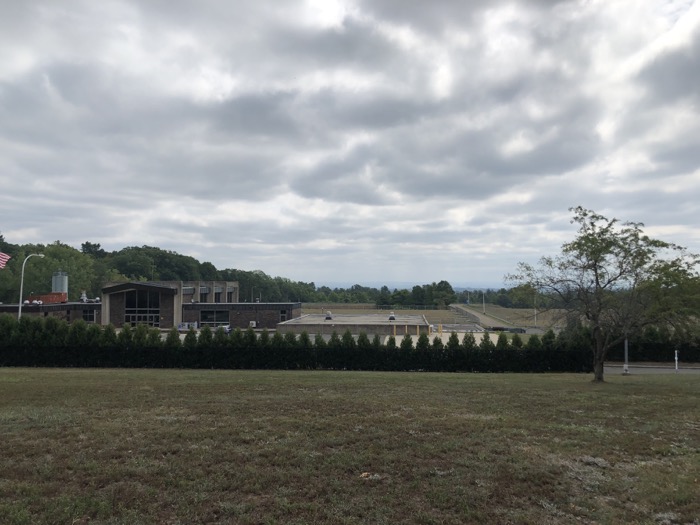 But there are several other trails here. There’s the one to residential West Hartford, which spokes off and offers a rather rough and unkempt walk through the woods either to route 44 or more or less directly the MDC buildings. The former will get you near the Revolutionary War Campsite and Hospital site that you may have seen signs for. (Spoiler: It’s not exciting.)

Whichever way you reach the water treatment facilities, you’ll find a drinking fountain, which I think is pretty cool: 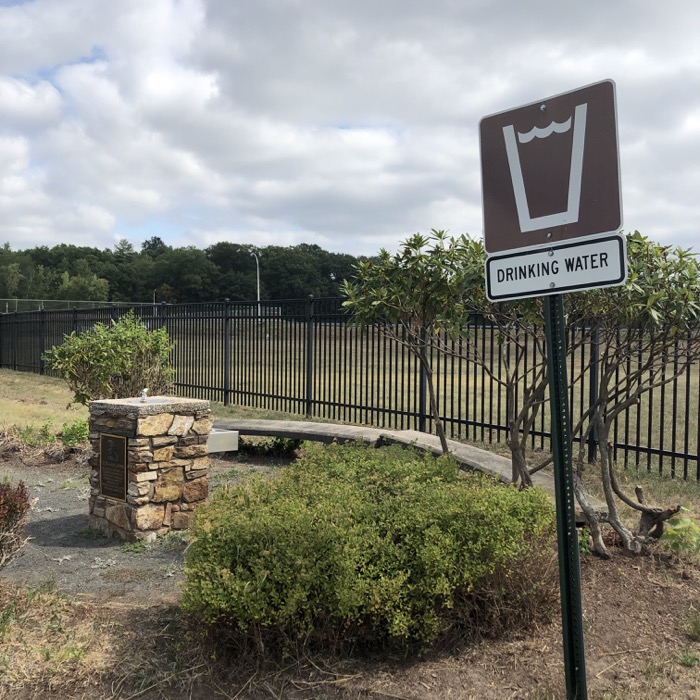 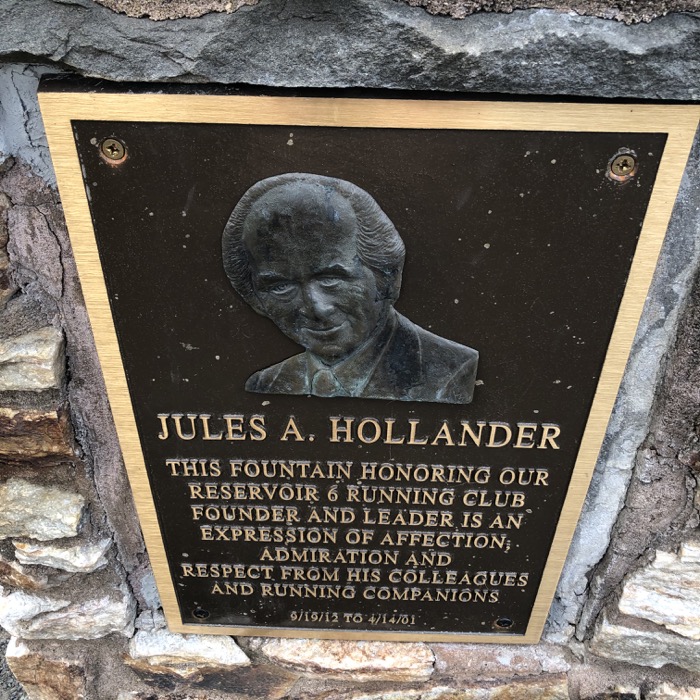 I have this misguided impression that the water from the fountain goes from the reservoir 100 yards away to the facility 100 yards away to a pipe directly to this water fountain. Like it’s the first and freshest tap water in the state.

And yes, our MDC water is excellent. Our tap water in MDC towns is as good as bottled water. In fact, the Niagara bottled water people thought so too… so they built a bottling plant in Bloomfield and – literally – bottle the same water I drink from my tap to sell at profit. 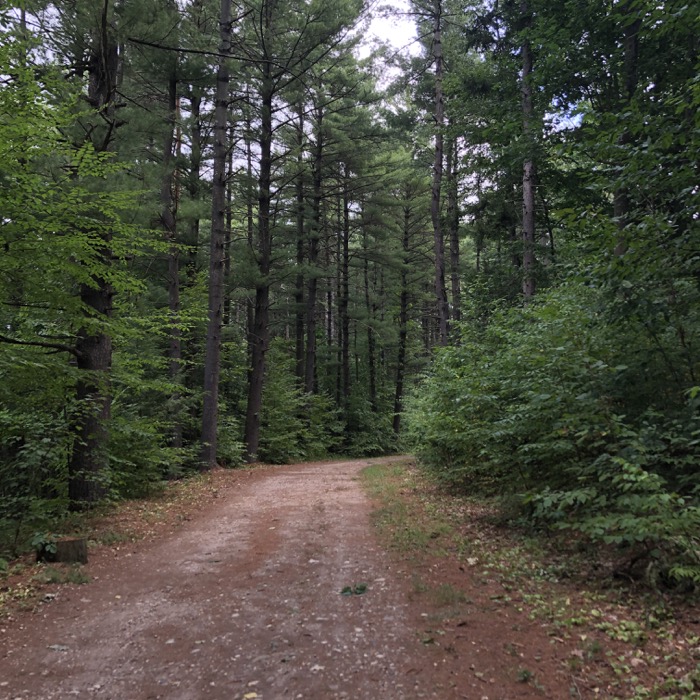 And by profit I mean profit since, as I mentioned, they get a massive break on water rates and property taxes. This entire deal was done secretly and suffice it to say, residents of MDC towns were not happy. Basically, a bottling plant gets our water on the cheap to bottle it and sell it.

But what do you expect from the MDC? A quasi-public outfit run by a criminal. 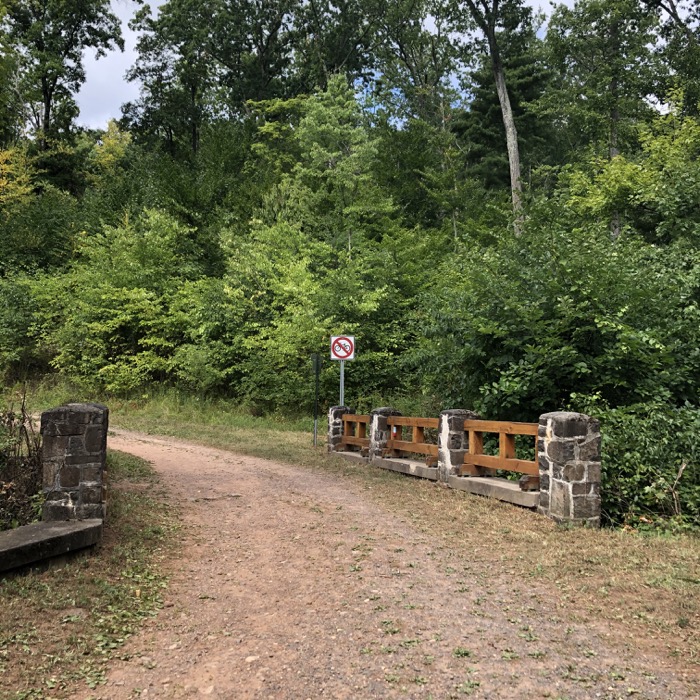 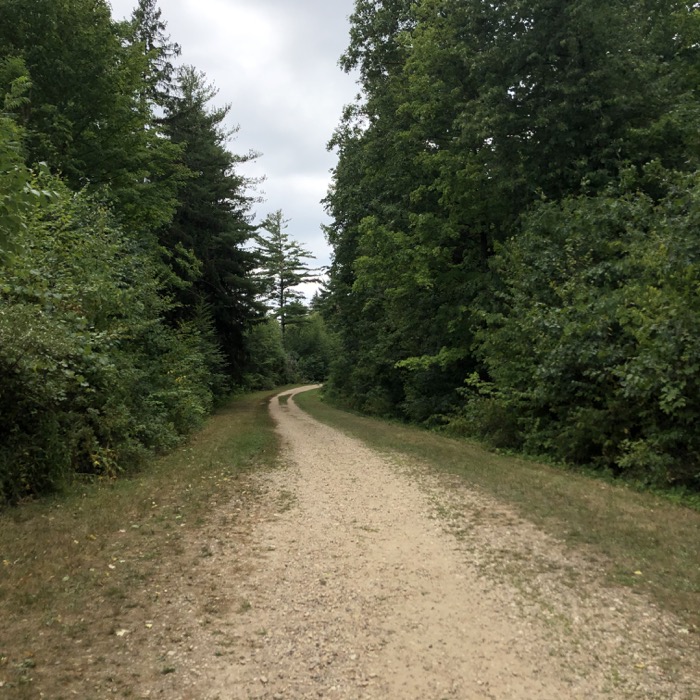 DiBella is a crook. The MDC isn’t really beholden to the state government, and has raised our water rates 9,000% (est.) over the last five years. I used to pay $35 a quarter. Now I pay about $70 a month. Maybe I should start bottling my tap water and selling it. 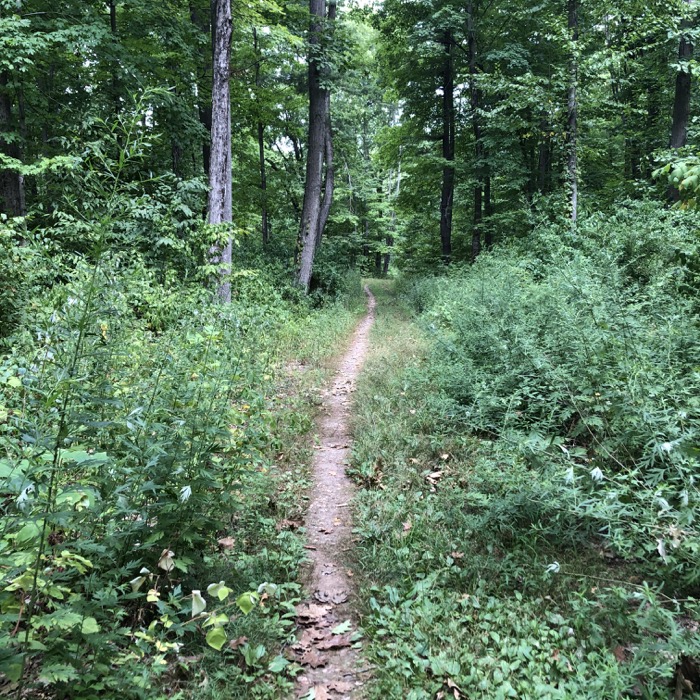 At the far northern end of the reservoir, a trail heads north off the main path. In all my visits to this place, I’d never taken this trail until now, for the purposes of this page. This is the “Talcott Mountain Bypass Trail” which stays below the ridge and the tower, reconnecting with the Metacomet Trail after it makes it ascent and descent. 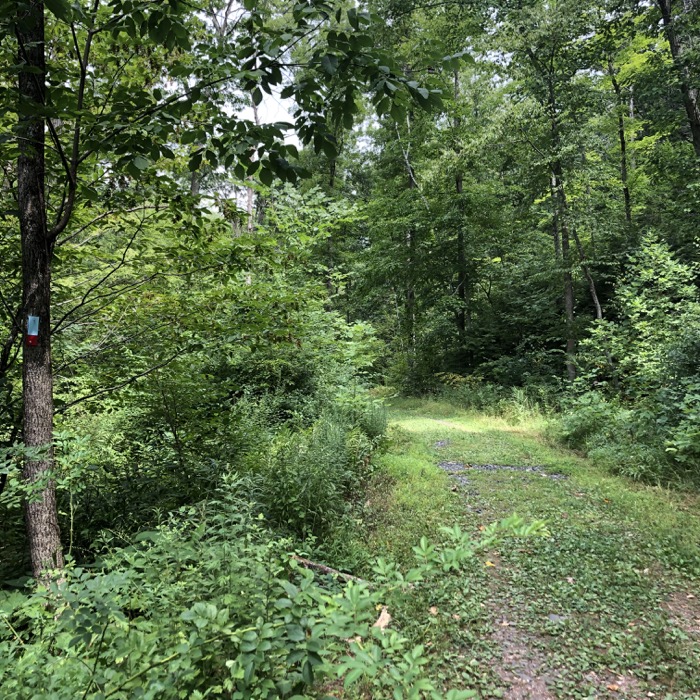 It is clearly not heavily traveled. While it’s blazed by the CFPA and certainly maintained, I didn’t see another hiker on it and it is a bit overgrown in a sense. I view this as a good thing. What’s funny is that halfway to its rejoining the Metacomet, you have another chance to head up to the tower: 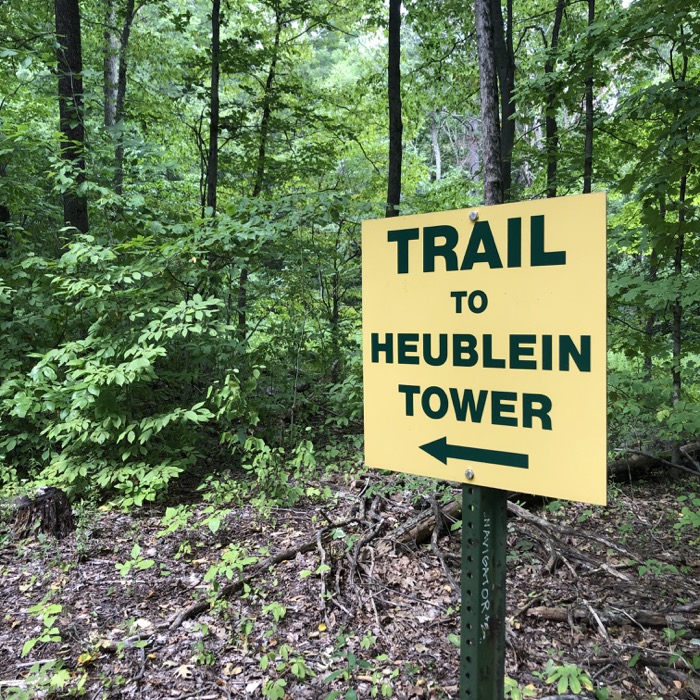 Sort of like, “Hey, did you really mean to skip one of the top ten beauty spots in Connecticut?”

I reached the end of the Bypass Trail and returned to the sign above and explored the unloved, unnamed Bypass bypass Trail. It was uneventful. Eventually reaching the Metacomet, my plan was to crossover it and explore the “trail” above the reservoir. 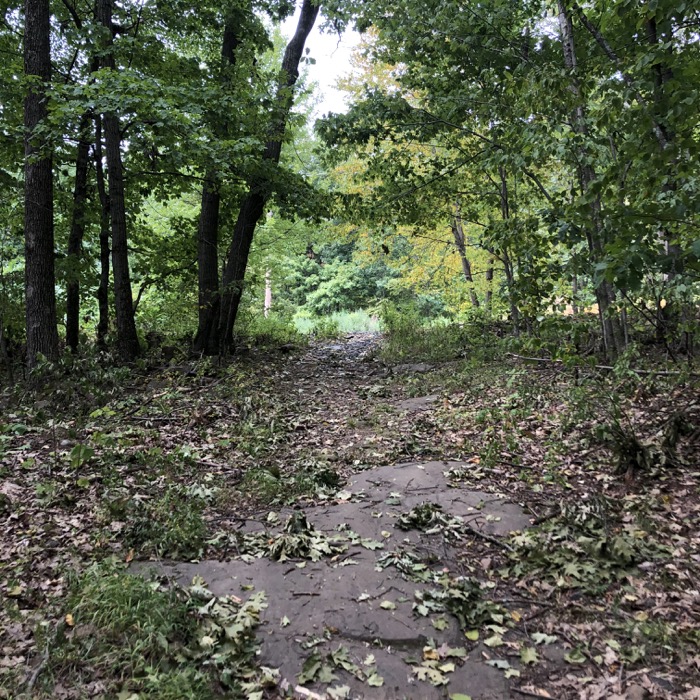 Unfortunately, it’s nothing more than a power-line access road. This is not pleasant walking and I very much don’t recommend it. Although it would offer a nice cross-country skiing challenge I suppose. 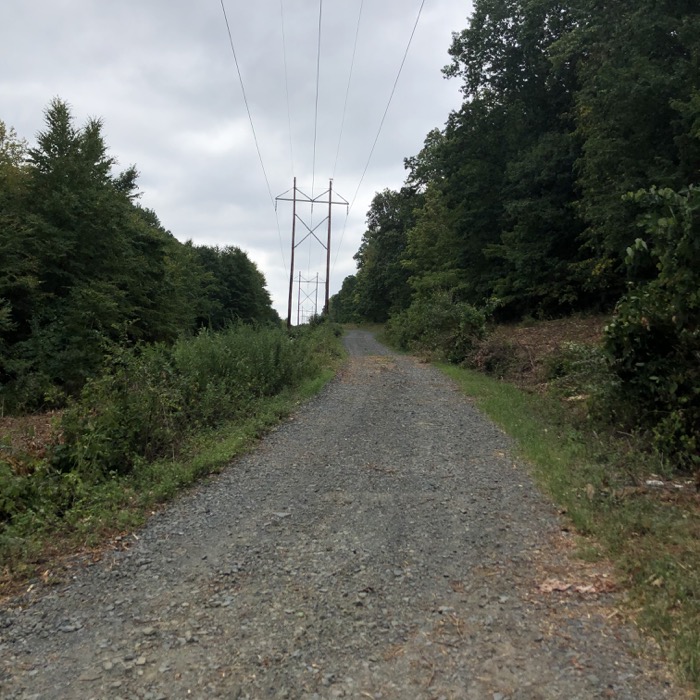 So I returned to the reservoir via the Metacomet Trail and enjoyed the mile and a half walk back to the southern end. Along the way, I noted the two “trails” I would have had a choice to descend from the power line road. I made the right decision: 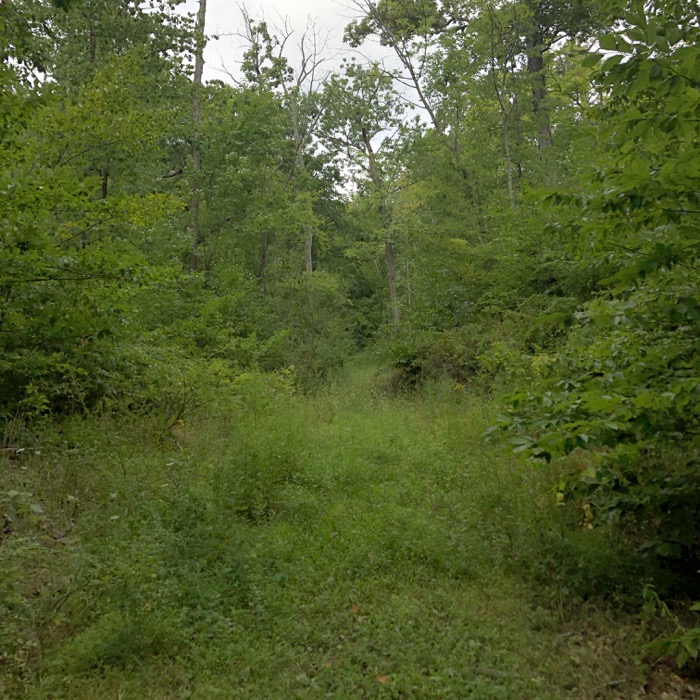 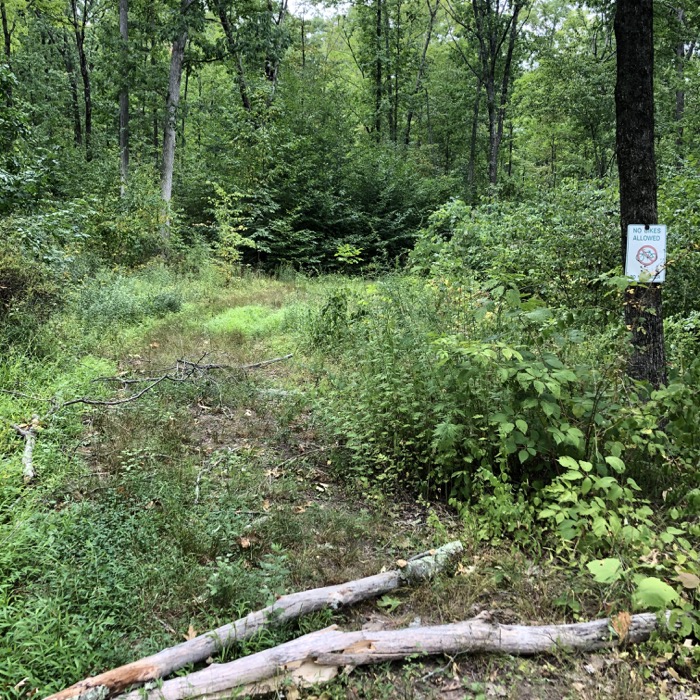 I would have gotten Lyme disease, rocky mountain spotted fever, and poison ivy. Do not try to use these “trails.”

And besides, the walk around the reservoir is beautiful. There’s a reason this place is popular. And fortunately it’s all still accessible to us all. Despite my disdain for The MDC, I appreciate the access to their land. There was a time that was in question. 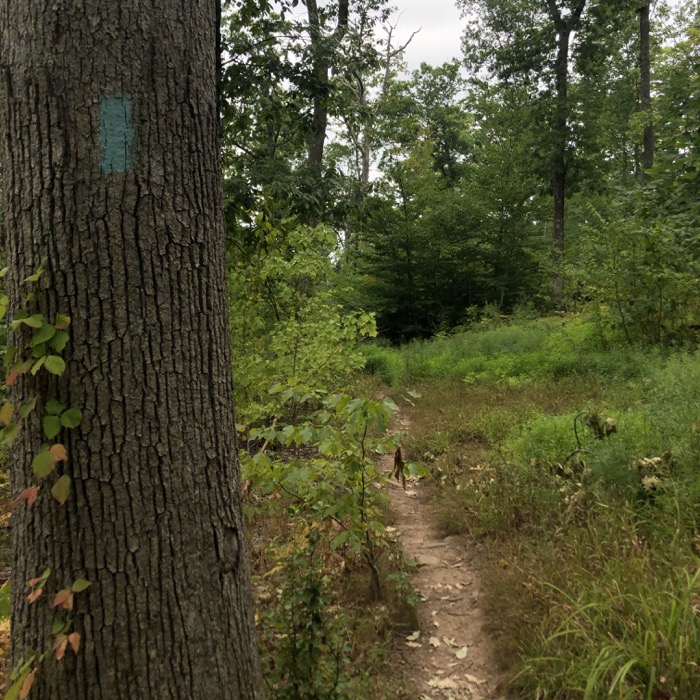 Ah yes, the litigious saga of Maribeth Blonski. This awful woman suffered her accident at the MDC property south of this one in West Hartford, but the ridiculous 2.9 million dollar settlement she received almost closed these places to all recreation. (I’m sure MDC customers paid it off through our bill hikes.) 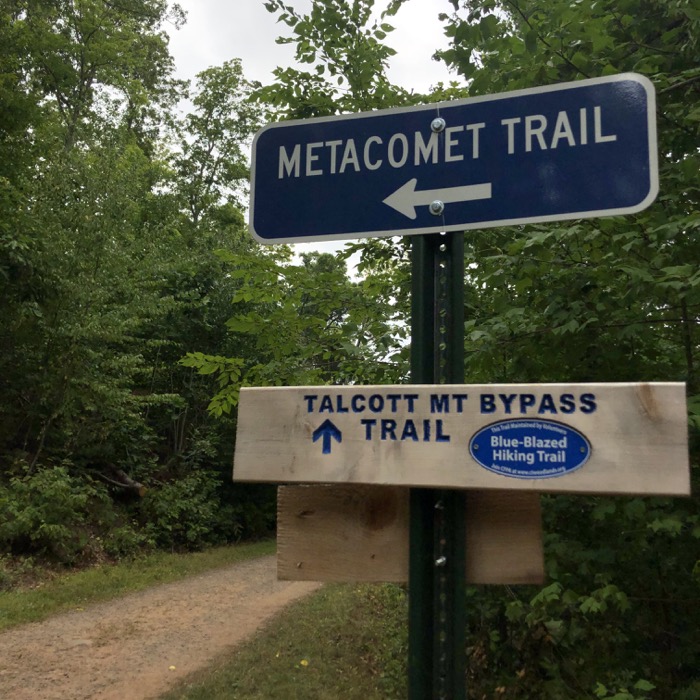 One of the gates, which consisted of 3-inch-wide pipes painted yellow, was at an entrance to Red Road, a paved road that runs through the West Hartford property. The road had lanes and other markings to indicate which way the bicyclists were supposed to travel.

On May 16, 2002, Blonski rode a bicycle on the road to videotape a segment on mountain biking for a cable television show she hosted, the justices said, citing court testimony. After taping the segment, she and a friend went for a bicycle ride.

As they headed back to the parking lot at the end of their ride, Blonski rode her bike in the wrong direction on Red Road, about 20 mph to 30 mph, with her head down. 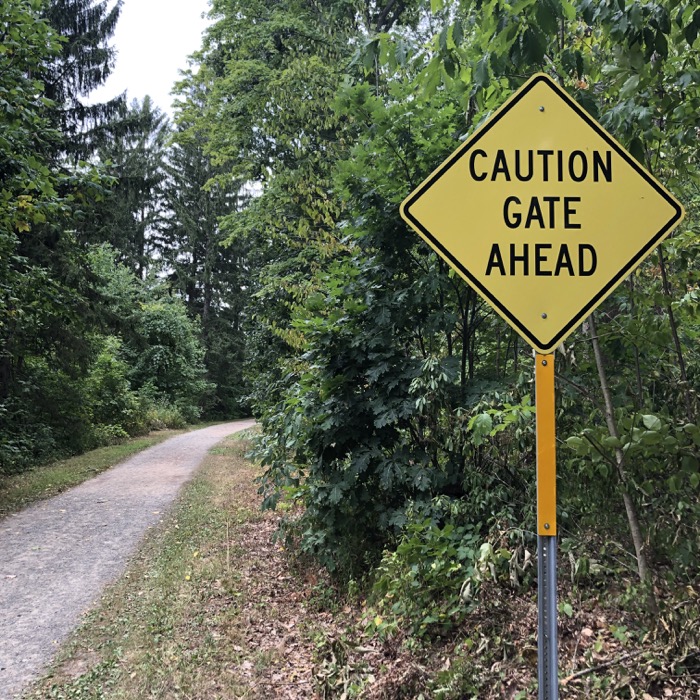 “The plaintiff testified that the pipe gate suddenly appeared in front of her ‘out of nowhere,’ and she attempted to slide underneath it,” the opinion states.

“She was unable to do so and struck her head on the pipe, thereby incurring severe injuries to her cervical spine, including a burst fracture of the last cervical vertebrae, as well as other injuries.”

Despite her injuries, Blonski has recovered and can ride a bike again, Jazlowiecki said. She was at the beach Friday.

This woman is reprehensible. And the reservoir 6 property has one of these phantom yellow gates that “appear out of nowhere.” I’m not sure how I was able to even photograph it. 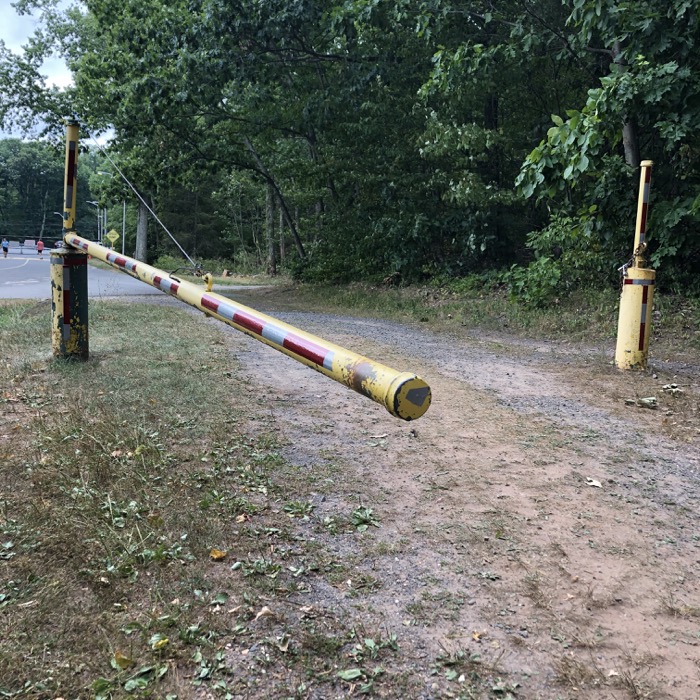 I think I’ve about covered it. Blonski is a terrible human being, the MDC is a sketchy organization run by a criminal, Niagara is selling our tap water after getting it on the cheap, and reservoir 6 is a beautiful place to visit. 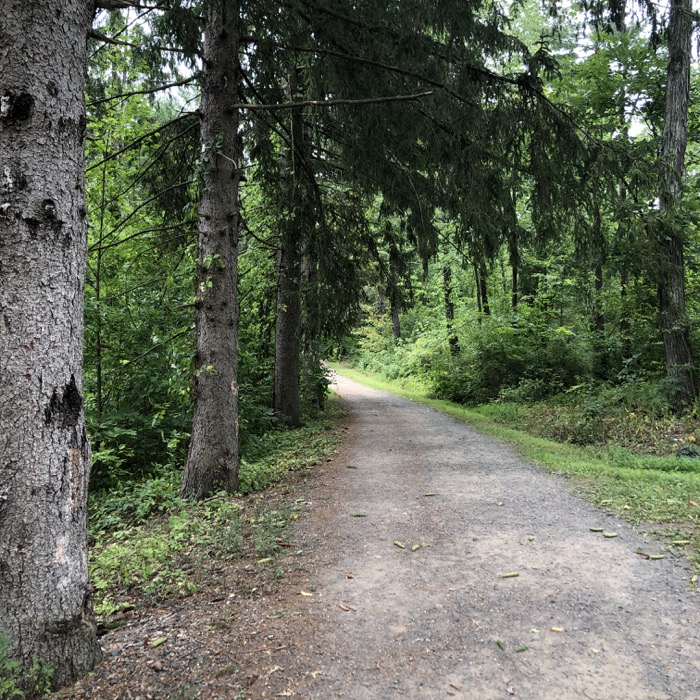 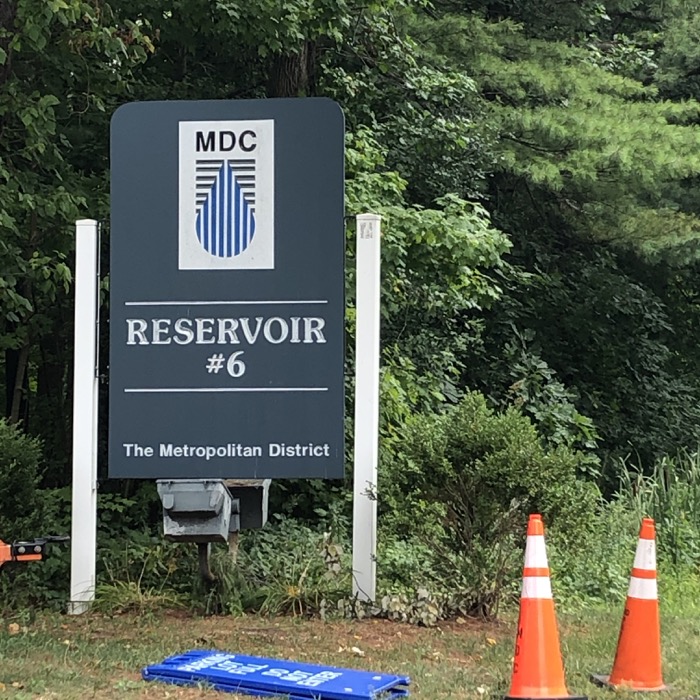