There exists – I swear – a dedicated group of people who are more or less familiar with all these tiny little properties with very limited visitation. They are some of my best readers in that they follow me on both Twitter and facebook and have provided me valuable insight and assistance over the years. 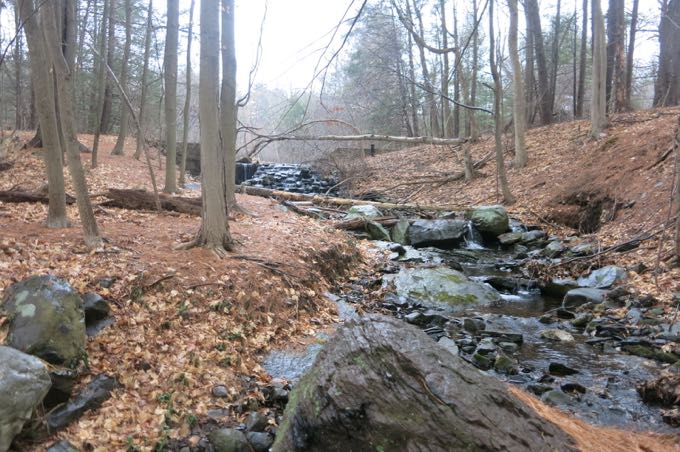 And believe it or not, there are guys out there who have poked around more of these places than I have. (Shouts out to Justin and Rich off the top of my head.) Moreover, a couple of these guys maintain spreadsheets of all these public lands and we like to compare notes every so often.

One guy, Justin Coleman and I’m using his full name because you should go check out his photography but don’t blame me for getting stuck there for the next hour of your life – anyway, Justin and I share much the same curiosity for these little properties. A few years ago I was looking over his list of places to visit and noticed what is now called the Van Otterloo Preserve in Bloomfield. 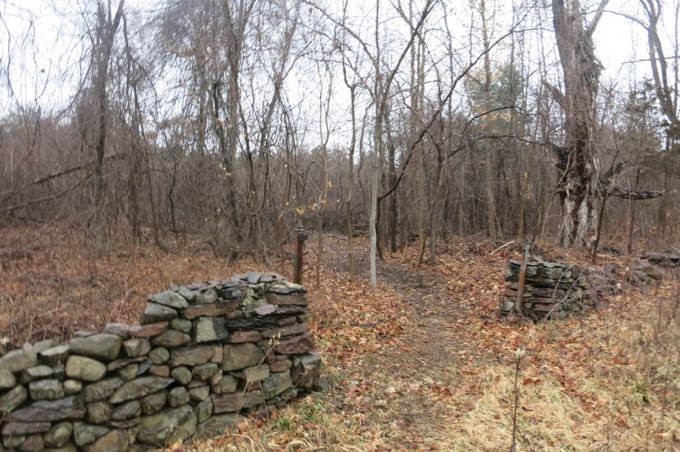 The entrance on Mountain Road

I chuckled and told him that this place is three minutes from my house and looked to be nothing more than a nightmare hellscape of Japanese knotweed, poison ivy, and multiflora rose off of busy Mountain Road, squeezed between a prirate road and a condo complex.

Which, of course, meant that we both became more curious about it, especially since it looked to be trailed at some point. 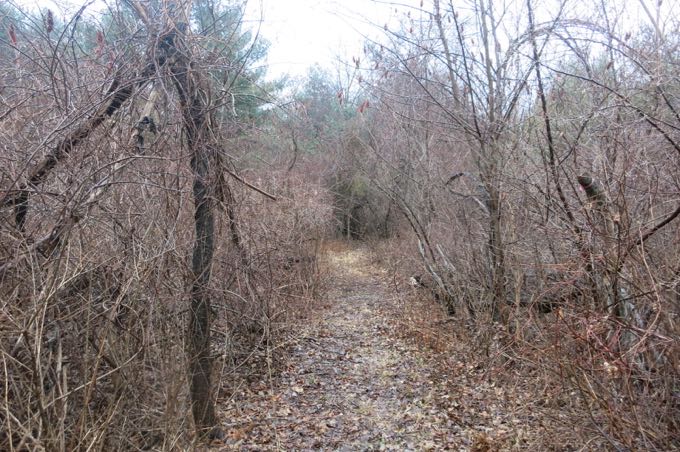 Clearing this trail must not be fun

Flash-forward a few years and another friend, Evan, also mentioned this place to me. He reported that he had hiked it, and that it was pretty stupid; a short little trail that dumped him into someone’s backyard on Guilmartin Road.

I must check it out.

So I did. On a cold and rainy Wednesday morning in February; it just felt right.

So to Justin, Evan, and Rich and you other folks that go to these places, this is for you. Park at the B’nai Tikvoh-Sholom Synagogue at the intersection of Mountain and Still Roads. Enjoy the panache of this house located there: 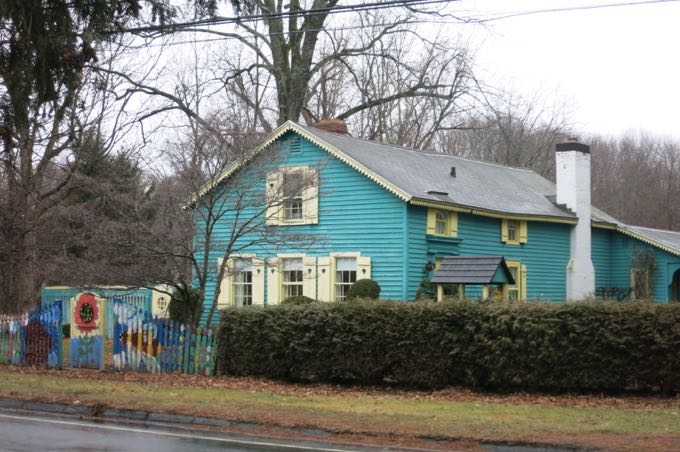 My son LOVES this house

Marvel at Guilmartin Road, a dirt road. There are signs on it claiming it to be a private road, but my guess is that a few too many idiots parked at the end of it to do some illicit drinking or something. (You can park at the end of it and take a fairly short jaunt up to the MDC Reservoir 6 property, but don’t do this as I’d assume you’d get towed.)

The trailhead starts at a gaping gap in an old stone wall. The WLT has done an incredible job clearing this first 100-yards or so of trail. Pretty much every sort of crappy southern New England/invasive edge species grows in abundance here. I can’t imagine this will be so well cleared when anyone else decides to hike Van Otterloo. 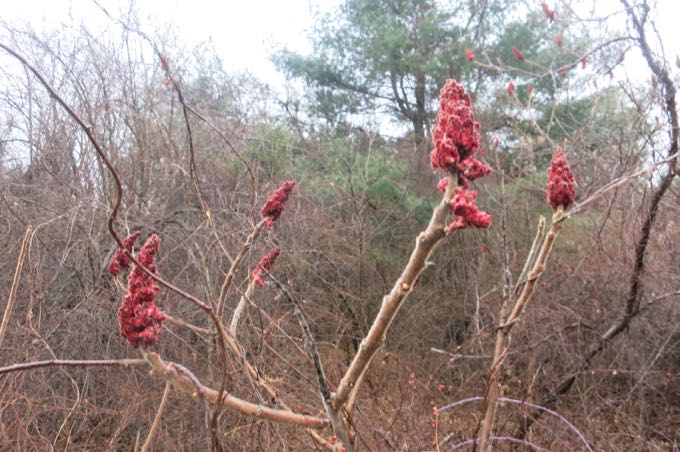 Color in February – sumac in the Van Otterloo Preserve

Once past that area, the trail enters a nice little pine grove and nears Tumble Brook. This little stream is fairly unremarkable, except for the manmade waterfall. Guilmartin Rd. and some houses can be seen from here, but it’s not too much of a distraction as you cross the bridge and enjoy the fake falls.

From here, the trail pretty much loops back and that’s pretty much it. It takes about 3 minutes to get to the falls. But looping back so quickly would be boring. There is the spur trail that goes to someone’s backyard. That’s no good. 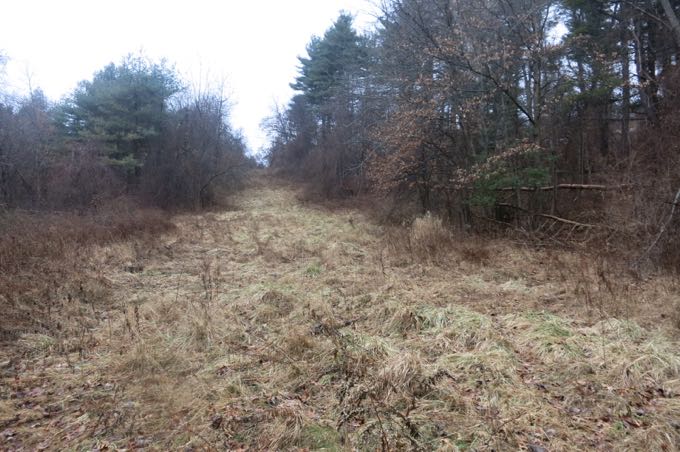 Your secret path up to the reservoir

But there’s another spur that goes out to a tract of open space to the west; towards Balbrae, the aforementioned condos. I went over there.

That swath of cleared land will take up up to the MDC Reservoir #6 and, ultimately if you wish, to the Metacomet Trail, Heublein Tower and beyond. This isn’t an official trail or anything, and you do have to cross a private road for a second, but you’re a trouper and you don’t care. 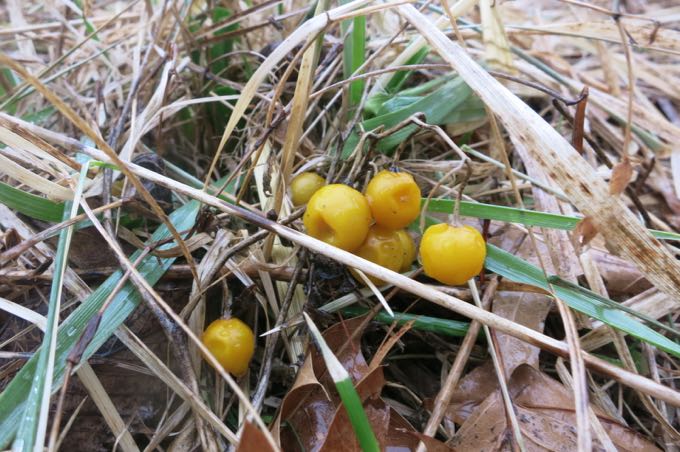 There are, literally, five (I think) Bloomfield/WLT properties that will get you from the east up to that reservoir/the Metacomet if you want. (Van Otterloo, Auer Farm, Speer, Stout Fields, and M.K. Wilcox Park.) And, for the most part, you don’t need to break any laws to do so. 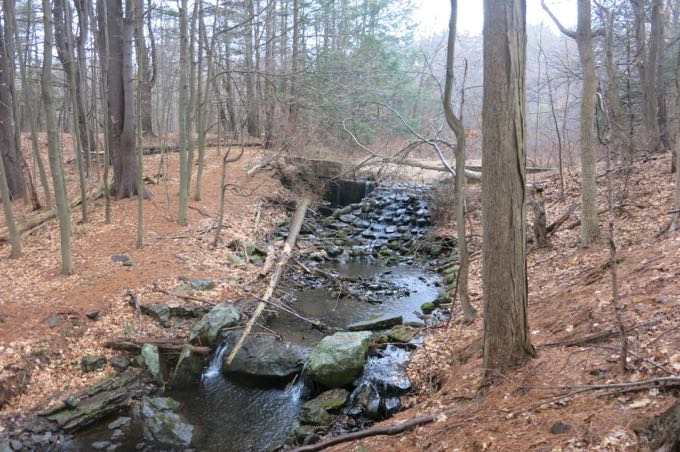