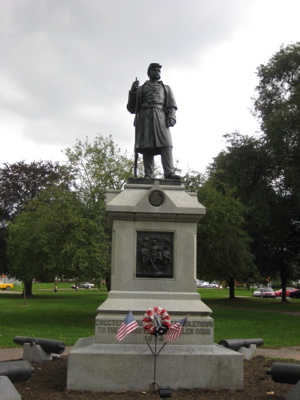 Every town has one, and here’s Middletown’s. By the end of the Civil War, one of every nine Middletown men wearing the Union uniform was dead.

More than 900 soldiers and sailors from the city served during the conflict; some were sons of locals and others were immigrants from Ireland, Germany and England. African-Americans also served in the all black Regiments.

In 1874, the city of Middletown erected a statue to honor her 110 soldiers and sailors lost in the Civil War. Sculptor Melmar Mosman (really? Melmar?) created the eight-foot bronze infantry soldier scanning the horizon in anticipation of the battle ahead. Around the monument’s base stand four 12-pounder cannons seized from the arsenal of the Confederacy which so many Middletown sons helped to defeat.