Did the Flood Wash Away the Real Statue?
On the Polish National Home facing Charter Oak Avenue
June 17, 2009

I love this one. This has to be the smallest marker of any sort in the state. Ironically, it notes a rather massive event in Hartford – the flood of 1936. Anyone who has lived here for a little while has come across some reference to the flood. CPTV runs a show on it every couple months and every library and museum in the county makes some mention of it. 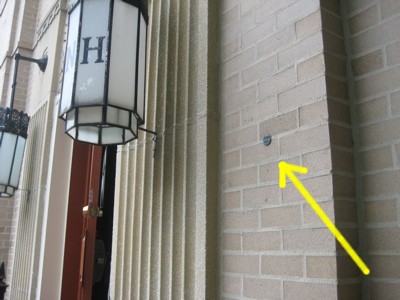 It was a big flood. It was the doozy that caused Hartford to make drastic changes to the rivers that flowed near or through it. From Connecticut History Online:

On March 12, 1936, rain began falling across Connecticut, as well as all of New England, and poured down for the next nine days. Fourteen inches of rain, coupled with melting snows from the area’s mountains, unleashed on Connecticut the greatest floods in its history to that date. The Connecticut and Farmington Rivers and all of their tributaries became raging torrents. Water and ice flows tore out bridges, highways, roads, and railways. The dam at New Hartford burst, and homes and buildings were washed away or destroyed. The waters at Hartford rose to a level of 8.6 feet higher than any previous flood level on record, flooding most of the downtown commercial area. Fourteen thousand people were left homeless, several were dead or missing, and epidemic disease threatened the population. The National Guard was called to action as the ravaging floods paralyzed business, traffic, communication, and home life, as the cities and towns along the rivers became the principal centers of destruction. While loss of life was small, damages exceeded $100 million, making it the costliest New England weather event to that time. 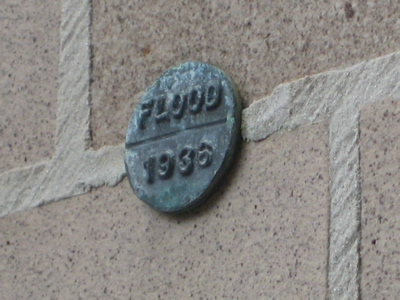 So, you ask, how in the world does one find this silver dollar sized memorial? On Charter Oak Avenue there stands the wonderful secret place to eat great food known as the Polish National Home. There, on the southeast corner wall facing the Avenue, it is embedded into the mortar about six feet up from the ground. You’ll note it’s not that far from the River, but that’s pretty darn high up in a rather flat city.

(A better question might be just how in the world do I find these things exist in the first place. Ah, but that’s the secret power of CTMQ.)

There is much more to learn about the flood, of course, but just not now. This post is merely about the cutest little thing in town. There are other flood level markers around Hartford and other towns along the Connecticut River. But they look more like this… a picture which I forget where it was taken. 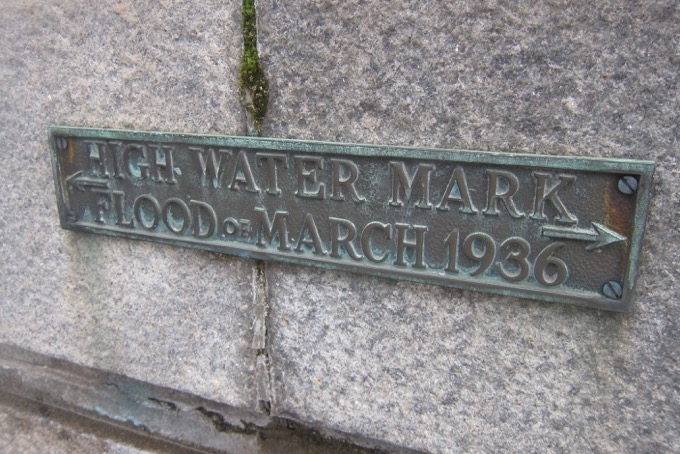