“If The Shoe Fits, It Must Be From Footprints”
Middlefield (Google Maps location)
January 16, 2016

Of course this isn’t a museum. But we’re all past that issue on this website by now, aren’t we? I know I am… and really, isn’t that all that matters? Really?

Heck, this postage stamp of a park hardly qualifies as a proper park! There are no hikes to be hiked and your entire Powder Hill experience may last less than five minutes. 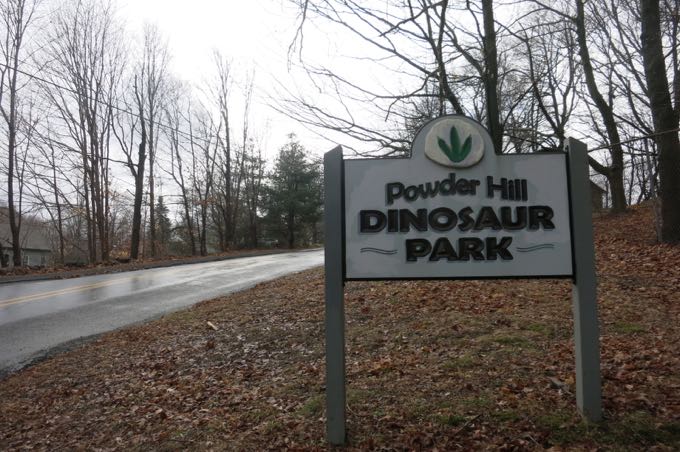 But I loved it. In fact, I love it so much that I revisited a few weeks after my initial visit. You’ll see in the pictures here that I only had Damian with me. Once Calvin heard that we saw dinosaur tracks, he begged to see them for himself. And any time I can expose my son to science, I try to make it happen.

Powder Hill is not included in any of that state brochures like Dinosaur State Park is. It’s not included on the iffy state-sponsored “Dino Trail” at all. It barely rates a mention on Middlefield’s town website(s)! And this is Middlefield we’re talking about here! 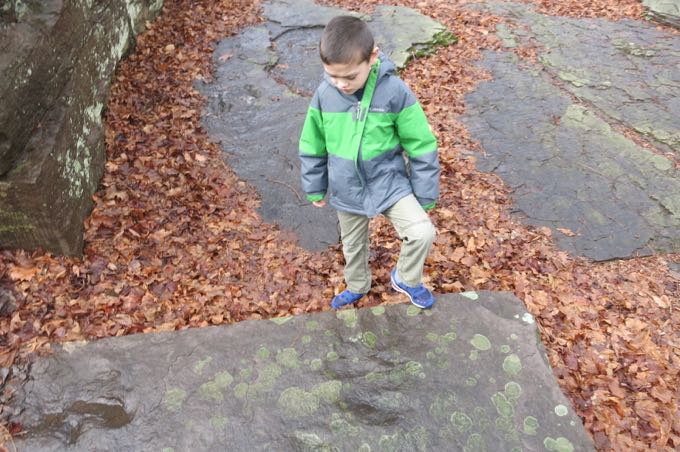 Powder Hill is free. Nothing else on the “Dino Trail” is free. You can touch the tracks here. You can stand in them. You can even lick them* if you want to.

The park is on the north slope of the hill along Powder Hill Road. We’ll call it Powder Hill. This is a beautiful road to drive from the south (or better yet, bike). To the west you’ll see the Powder Ridge ski hill, and to the east sprawls Lyman Orchards. On the right day with the right light conditions, a real photographer could get some great shots from the intersection of Powder Hill road and South Street. 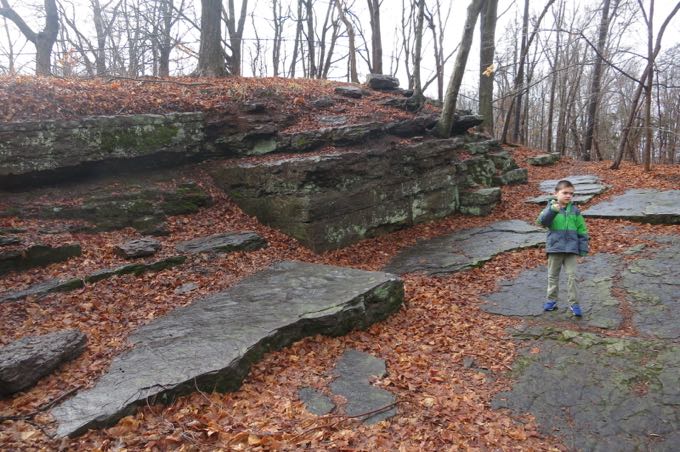 Once at the park, you hop out of your car, walk about 30 feet onto some rocks and voila. Dinosaur tracks! You can’t really walk anywhere else, as this tiny little park is fenced in. But so what. As I said, it’s really cool.

And its existence is amazingly fortuitous. Back in 1846 this area was owned by a guy named Wesley Coe. He gave Middlefield permission to quarry stone from his property to build the Beseck Dam. Then they found the tracks and let them alone. Nice! 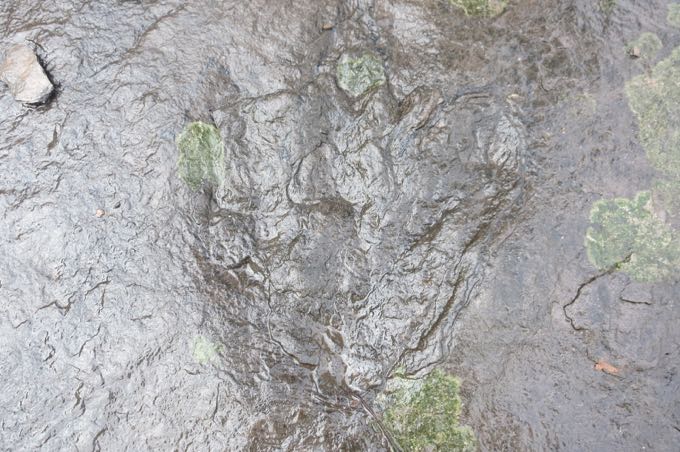 So what did Mr. Coe do? He went on to become a professor at Yale and a Curator of Zoology at the Peabody Museum down there. Was he inspired to take that path because of the prints on his land? I have no idea, but let’s pretend that’s the case. Because I like that story.

Coe gave the property to the Peabody and it was known as the “Peabody Museum Outdoor Park” for quite a long time. But then in 1976 the Peabody – which is 20 miles away from here – gave the park to Middlefield. And here we are today.

You can’t miss the big tracks. But there are also some small tracks here as well. 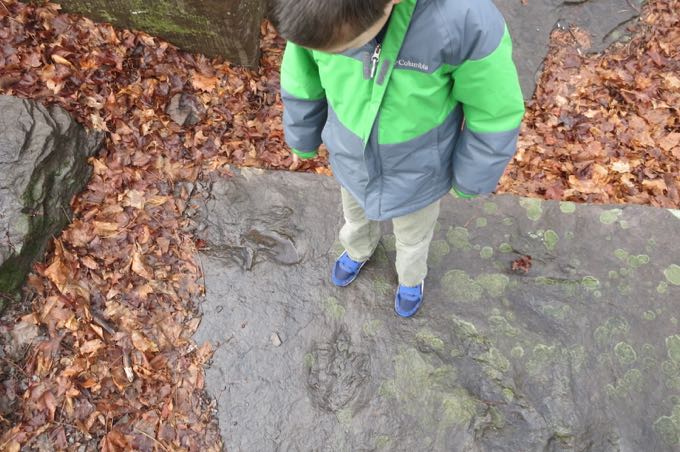 The largest prints (about 25 cm in length) are the Eubrontes giganteus trackmaker prints. The medium ones are called Anchiauripus and the smallest ones (under 15 cm) are called Grallator. Of course, there is argument about whether the smaller prints are just juvenile Eubrontes.

Since most of you have been to Dinosaur State Park, you probably know that dinosaur footprints have names separate from skeletons. Since we can’t really know what dinosaur made what prints, we name prints as their own thing. Here in Connecticut, with our plethora of Eubrontes, we say that we think they belong to something like the Dilophosaurus..

We do know that the prints date back to the early Jurassic period, about 200 million years ago. 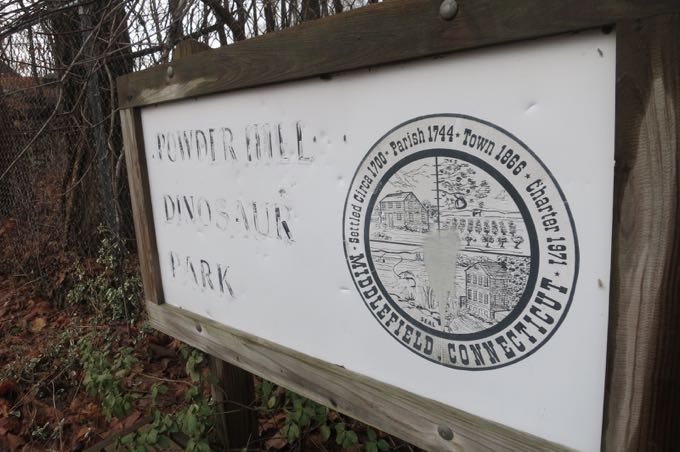 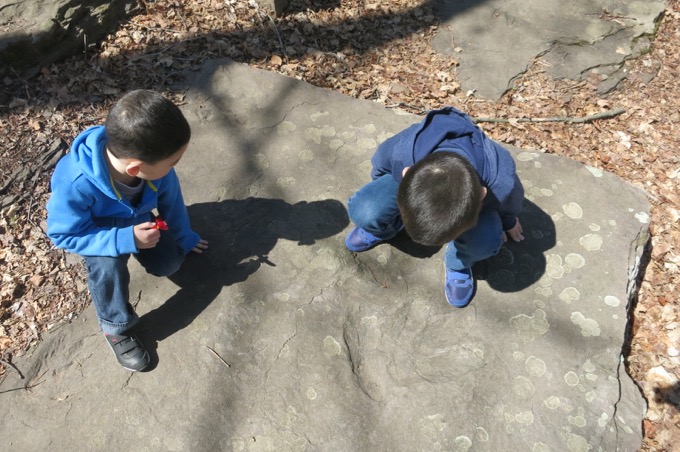 And yes, later in April, I went back again with both boys.

There are a bunch of places in Connecticut with similar prints, but I can’t expect anyone to go traipsing all over the place looking for them. You’ll be well served just by this one, and if you have little kids, they will feel a sense of discovery if they don’t know why you stopped along the road to go walk on a big flat rock.

And then you can go enjoy some apple fritters or whatever at Lyman Orchards.