These two tiny standalone museums are part of the larger East Windsor Historical Society Museum complex. There are two historic house museums, a farm tool museum, a schoolhouse museum, and the two that I’ve combined onto this one page. 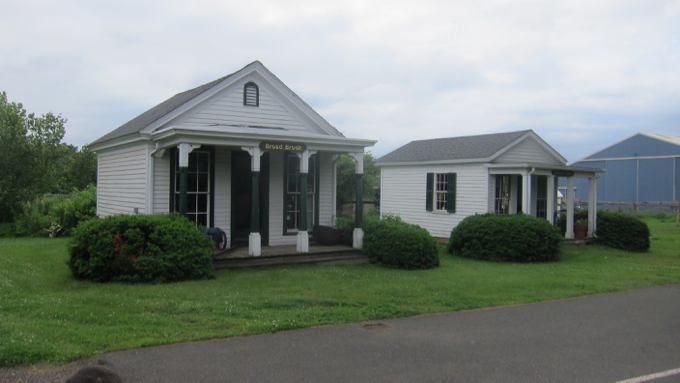 And people claim I pad my museum visit numbers! Ha! Here’s an example of the opposite! Furthermore, we actually visited these two joints in June 2014, but I revisited in August three years later and… you don’t care. Let’s get to ’em.

When I posted my write-up of the Scantic (East Windsor) Academy Museum, a Twitter follower read it (for real!) and wondered what the heck the neighboring Probate Court Museum could possibly be. 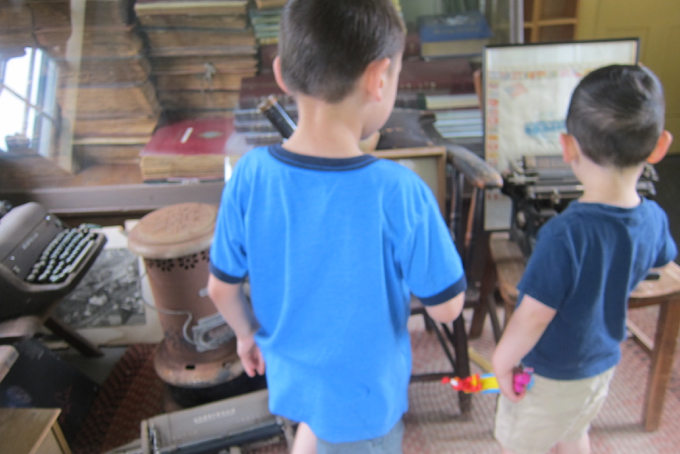 Well, I’ve been. My kids have been. And frankly, I don’t really have an answer. I believe I can say that this is an example of that curious museum phenomenon known as, “An old building exists and we know what it once was, so let’s call it a museum.”

The Probate Court Museum is a little bit more than that, as the historical society did make the effort to move it across town to be placed here. And fortunately they offer a bit on their website as to its origins:

This building was donated by Marie Rego and moved to the Academy site from 108 Main Street, Warehouse Point, in 1984. It was used for a while as a doctor’s office (Dr. Marcus Lyon Fiske in the 1860’s) and as the headquarters for William Barnes, who served from 1838 to 1879 as judge of the East Windsor district probate court.

The district has always included East and South Windsor, but at various times also served Enfield (1782-1831), Ellington (1786-1826), East Hartford, Glastonbury and Bolton (1782-1797). The court was moved to the home of Ralph M. Grant when he was elected probate judge in 1899 and has remained in South Windsor since then. 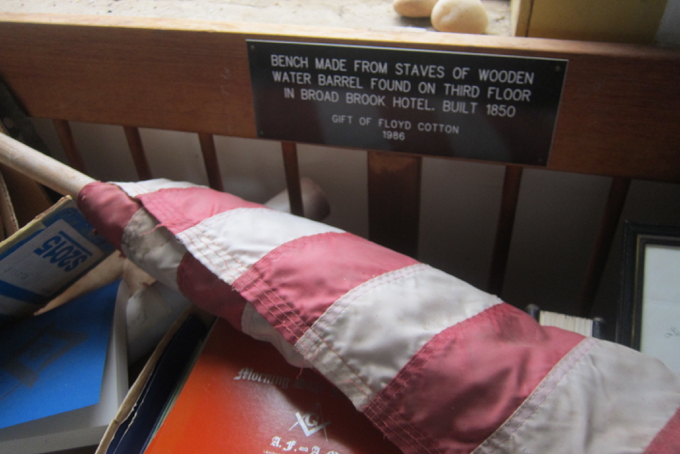 Okay, so this tiny 18’x 12′ building was, yup, the probate court for several towns back in the day. It was cluttered and a bit dusty during my visit and while the Academy Museum was well organized, the society hadn’t gotten to this one yet. Surely the Broad Brook Barbershop Museum has a bit more to offer…

Now that you know that there are a bunch of museums all collected together in East Windsor, perhaps you’re thinking moving these little buildings here was some sort of recent development. While it’s true, a couple of the museums here are of recent vintage, the random little Barbershop Museum was moved here in 1967. 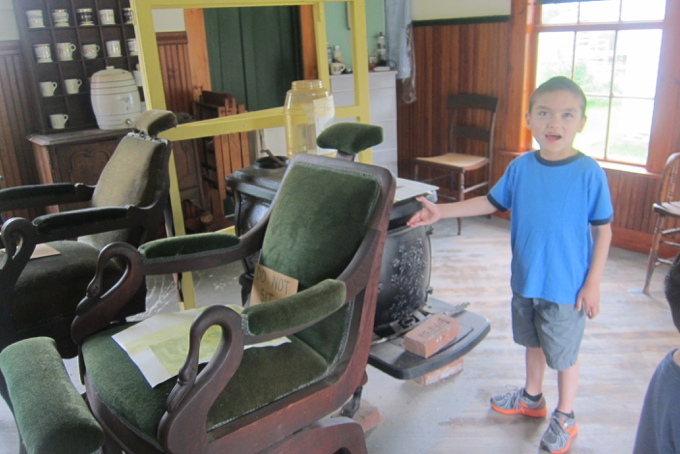 Yes, someone in 1967 said that it would make sense to move a little barbershop to the town green area because doofy dads 50 years later will want to have a looksee. And here we are.

A barber shop museum is housed in the former Ertel/Geissler Barber Shop, moved to the site in 1967 from the center of Broad Brook. A native of Saxony, Maximilin Ertel came to the USA in 1881, took over the Bernard Carey Barbershop; he moved to this new Main Street Shop before 1890. In 1919, he sold the business to Rudolph C. Geissler, who also served as a local judge. Mr. Geissler ran the business for over 40 years.

The museum has Geissler’s original barber chair, Ertel’s license, and several items from both shops. The descendants of Mr. and Mrs. Ertel have generously assisted with the restoration of the building. 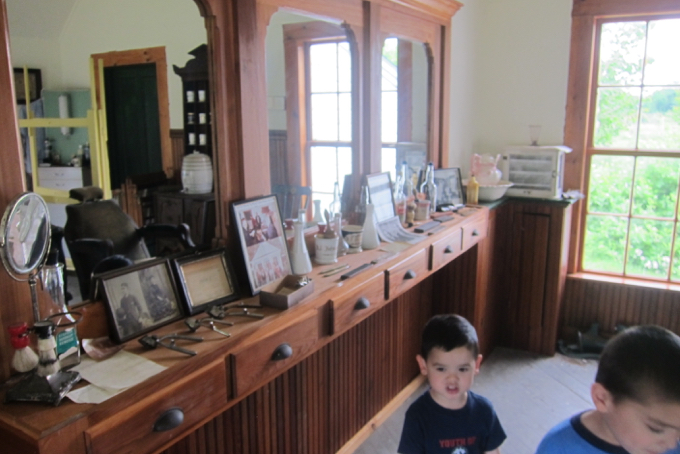 There was another barber shop museum in Connecticut at one time. Down in Meriden, the eccentric Lester Dequaine ran several random museums that all went kaput around 2005 or so. (Just before I began CTMQ.) It was the National Shaving and Barbershop Museum. I never got to see inside, but that didn’t stop me from writing about it. 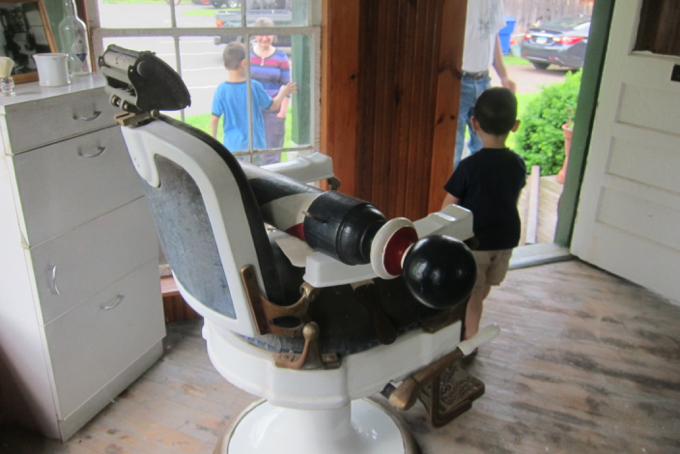 Here? I did get inside – twice! Three years apart! And… there’s the old barber chair and another old barber chair, and some old-looking barber tools and supplies. And lots of atmosphere. Yes, olde timey barbershop atmosphere!

When I revisited in 2017, a woman in a barber smock was giving haircuts: 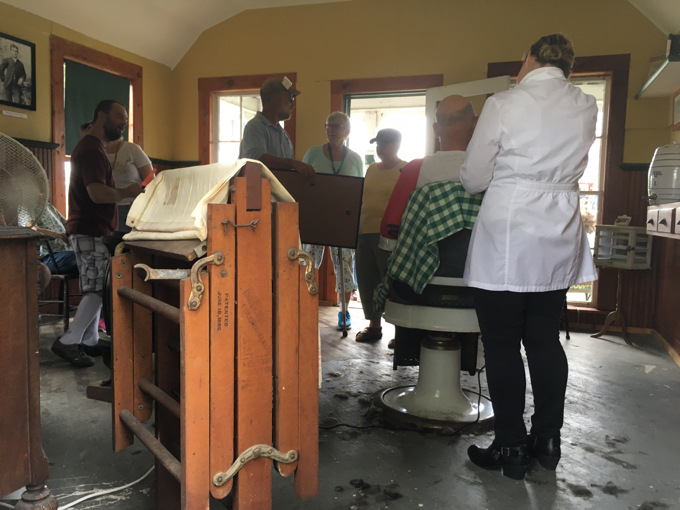 Which was pretty rad. The complex was on a high because the complex’s Osborne House’s grand opening was that day. And I don’t know about you, but free haircuts in old barber chairs at a 130-year-old barbershop are the best way to celebrate such an event.

(They also handed out free ice cream. It was a good day.)