East Windsor is funny. Depending on how you count such things, there are either 9 museums or 2. Note: if you say two, you’re not qualified to be a CTMQ reader. There are two “complexes” of museums in town; the Trolley Museum complex has three museums and the Historical Society complex has six, and you could make a case to lump them all together I guess. 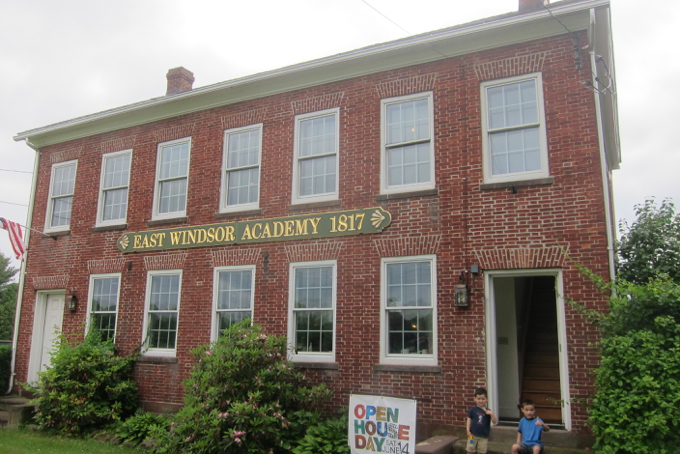 But you shouldn’t, because they’ve all come online at different times and several are distinctly different. This one, sometimes called the Scantic Academy, is the society’s main museum. This is where they put all their stuff that doesn’t fit the theme of their other onsite buildings.

As a result, the East Windsor Academy Museum is a mess. A glorious, catalogued, and navigable mess. What better place to bring two young boys on a muggy Saturday in June?

The museum started off with a bang! A worn chunk of stone encased in plexiglas amongst some weeds: 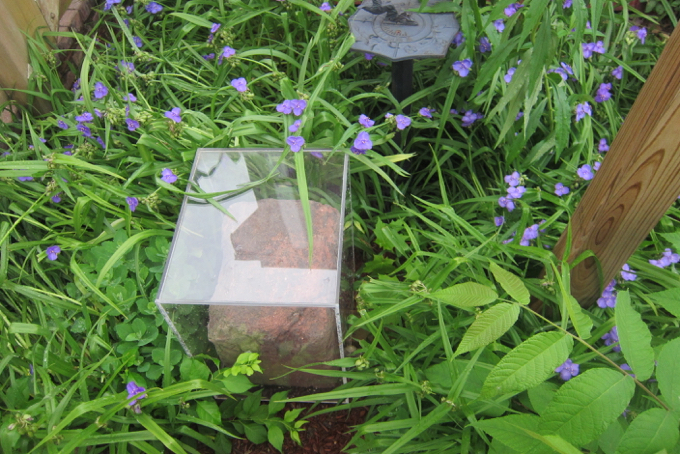 Surely this thing has seen some stuff. So… what is it? 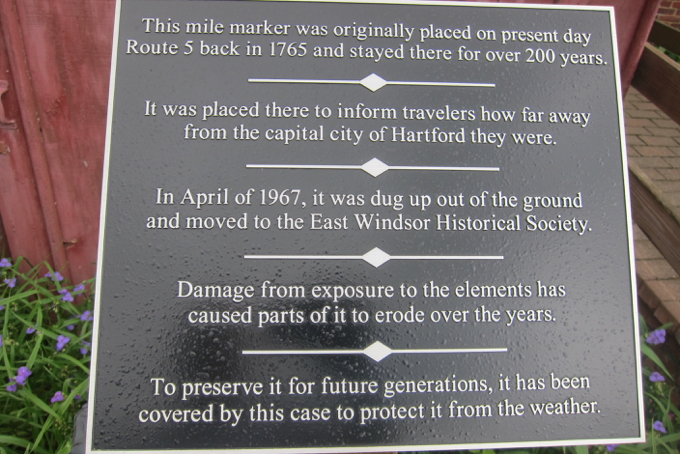 And then I came along and wondered why in the world they’ve gone to such lengths to protect something that is replicated hundreds of times all over Connecticut. Seriously. There are a ton of these old surviving mile markers in the wild. Regardless, I knew we were in for a treat. Let’s go inside.

I hope you’re sitting down, because I’m about to blow your mind… The earliest verifiable discovery of dinosaur bones in North America was in… East Windsor. For real. Fragments of the forelimbs of a small plant-eating dinosaur that lived early in the of the Age of Dinosaurs were found here. The discovery was (and is) called “The Bones from the Well.” They were first unearthed in 1818, but sat around for decades until famed Yale paleontologist O. C. Marsh declared them dinosaurian. 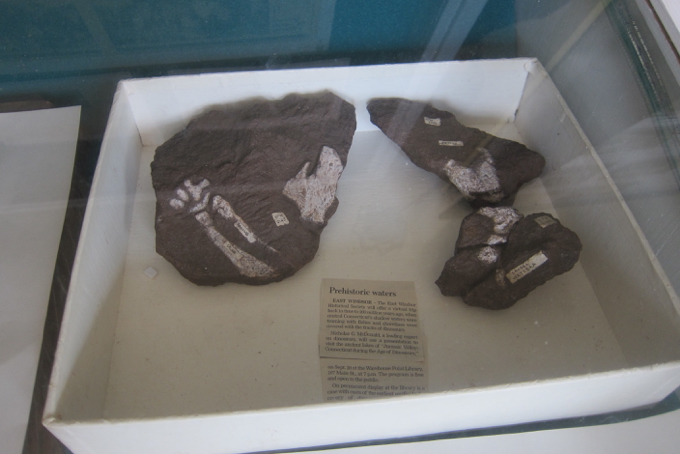 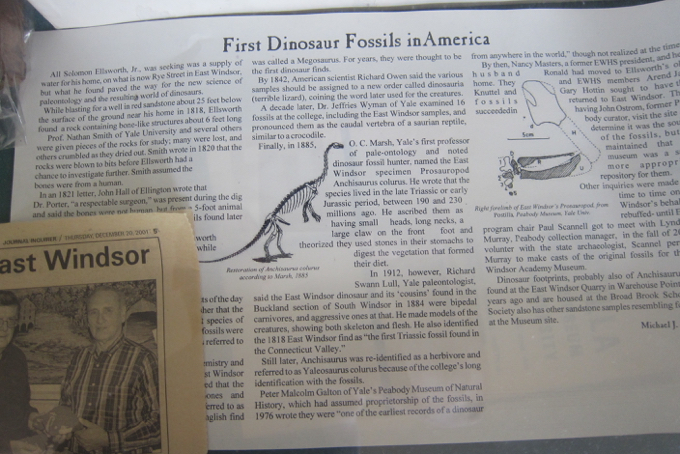 But no one cared. Not then, and unfortunately, not so much even now. The original bones still languish in a basement at Yale – and despite some efforts of East Windsor locals, that’s where they’ll stay. Annoyingly, many textbooks credit the first dino-discovery to England. That makes me mad. This 1993 Hartford Courant article spells it out quite well.

I will try to remember to fight the good East Windsor Dinosaur fight. 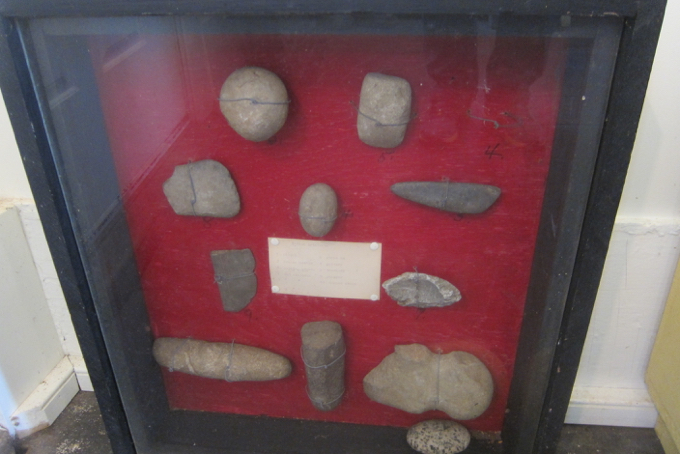 We moved on from 65,000,000 years ago to 650 years ago and the museum’s Native American artifacts. As with many town history museums, most of the items here have been donated over the years by local residents.

Back when people began tilling and farming East Windsor, arrowheads and stone implements would just churn up in the soil. In loamy river communities such as East Windsor, this was quite common. 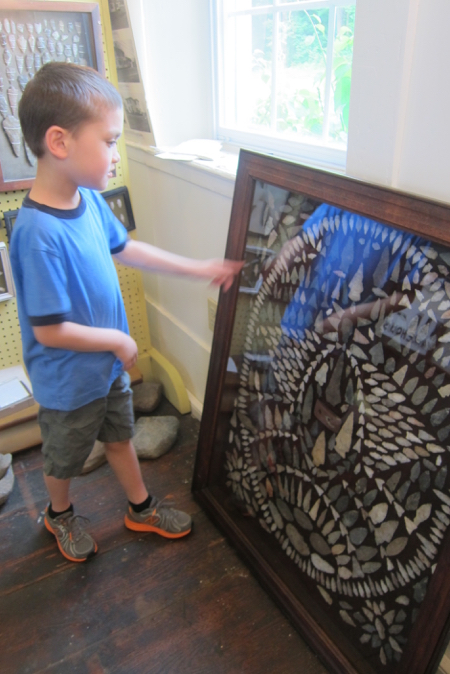 Which means that old farming tools are also quite common. So common here, in fact, that they have their own museum – the Farm Tool Barn Museum Thing which is at the same complex as the Academy museum. Along with a barber shop museum and a historic house museum and a one-room schoolhouse museum. Oh, and a probate court museum. 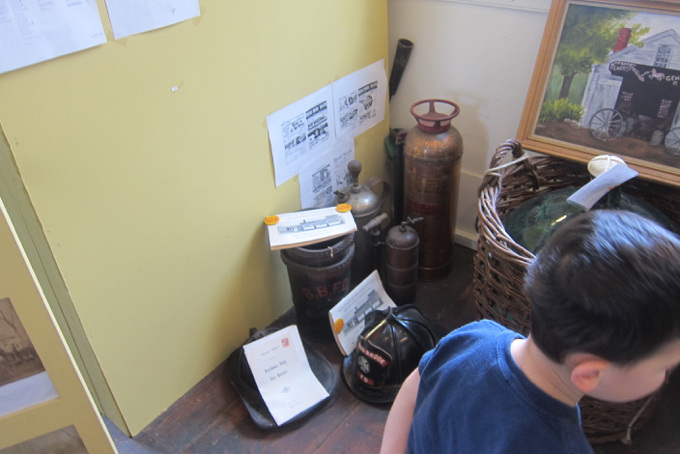 – and if you are really into old timey fire-fighting stuff, I’d suggest you head over to the Trolley Museum in East Windsor. Because, of course, that’s where you’ll find the Connecticut Fire Museum. And the Motor Coach Museum.

So… is it 9 museums? Or two? Or somewhere in between? Or is the better answer, “Steve, we don’t really care, dude. You’re the only one who thinks about this stuff.”

Fair enough. This is for you, jerks: 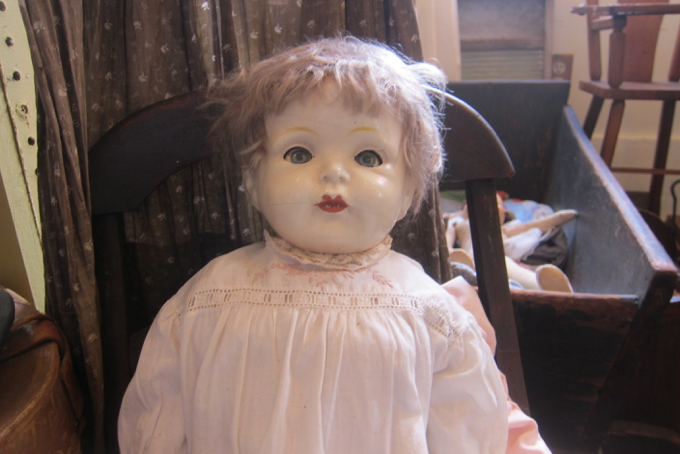 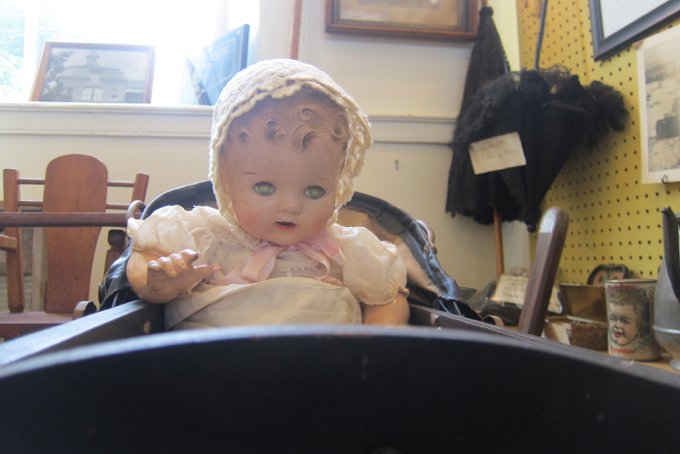 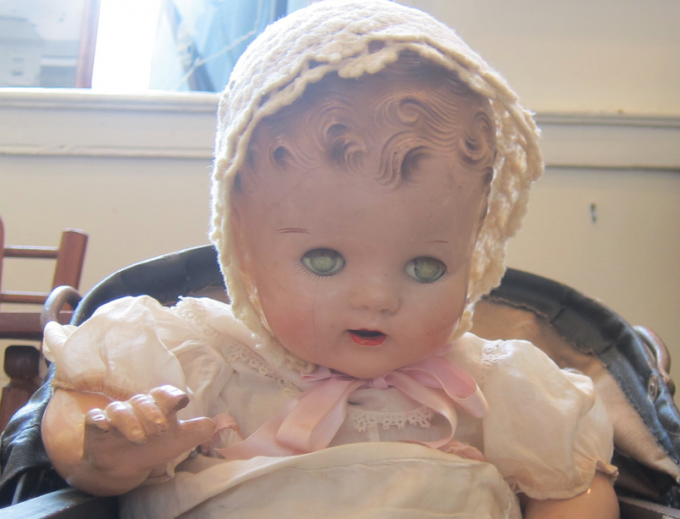 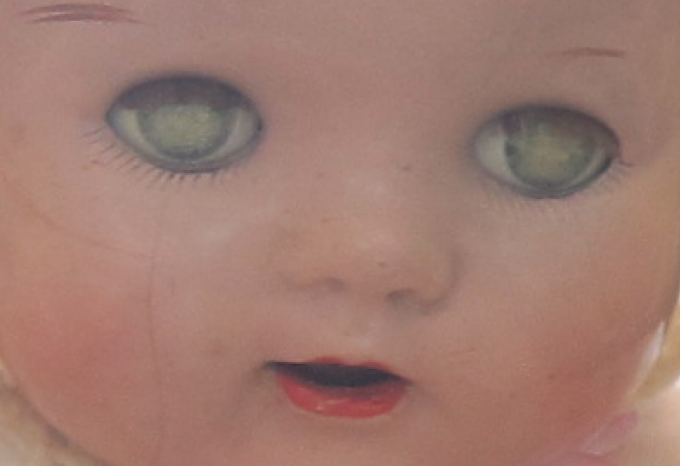 I’m not sure I’ve ever seen such pretty dead eyes before. I’m guessing this one is high on coke and ecsasy and… I actually just googled “what drugs dilate pupils” because, well, because I’m an old man who cares about how to count museums in East Windsor, Connecticut and don’t know which illicit substances cause what. 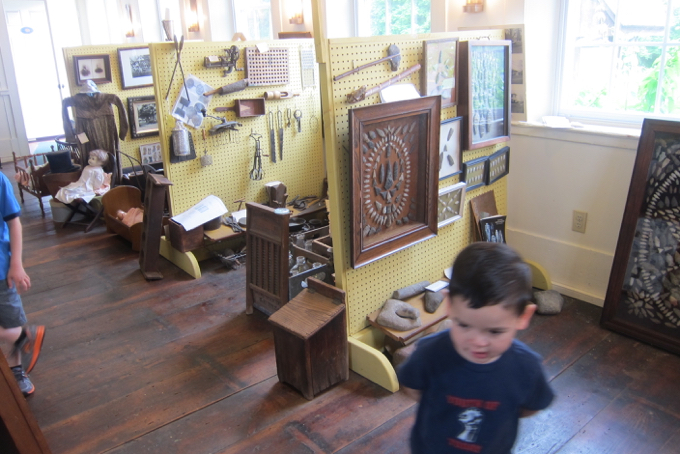 My goal in writing up these types of museums is to seek out what’s unique about them and their town. I’ve already done that above with the dinosaur stuff and I hope you appreciated it. Because pretty much all of the other stuff here is the same as the stuff at other town history museums across the state – and presumably the entire northeast quadrant of the US.

But I still love them all and find them all interesting. For real. I like to see how each town’s historical society displays their collection. I think East Windsor more or less nails it. A wildly varied mishmash of things in a crowded, but not too crowded, way. They’re sure to highlight the highlights like the guns. Everyone loves the guns. 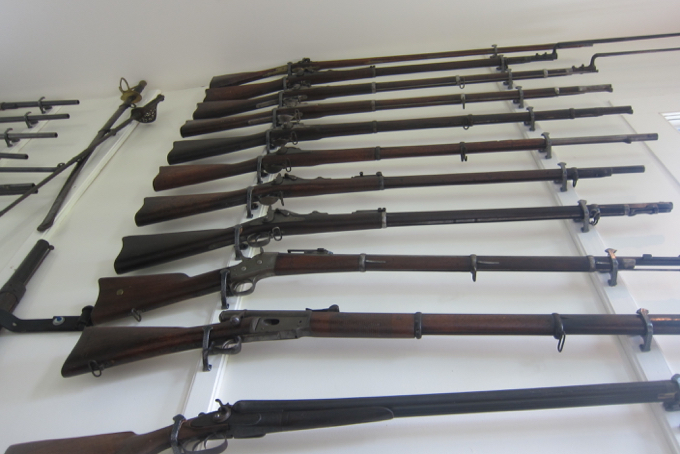 This is the Louis Sunega Arms Collection.

Okay, you get a pass. Louis Sunega was just some guy who lived in East Windsor who collected old guns. And here they are. 19th century long guns. On a wall. Awesome. 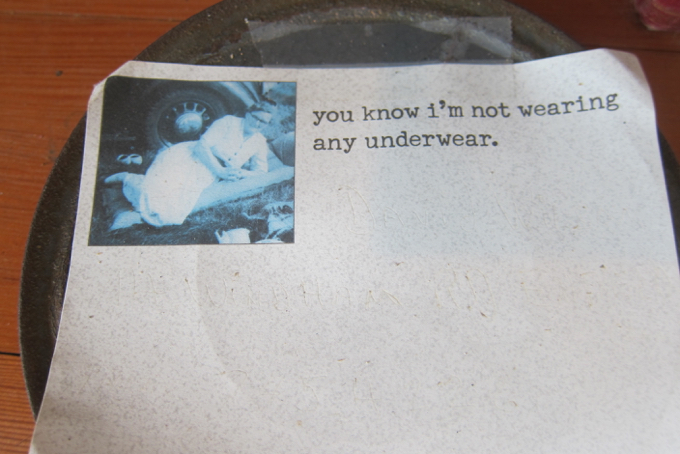 Just wanted to get your attention back. Because I’m about to tell you that here, on the second floor of the East Windsor Academy Museum, is one of only 3 existing Slubbing Billies. Also called a twisting machine. I’m sure you know this, but it represents a step in automation from the single strand yarn spun on the Great Wheel.

The twister used two operators. The “Billy Boy” fed the raw carded strands of wool to the twister, who spun and spooled the yarn. I’m assuming it’s in this picture: 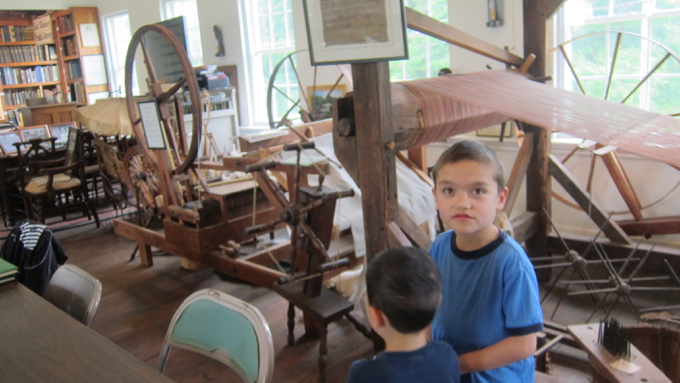 Okay, what else do we have here. An old cash register that Damian was a bit too obsessed with? 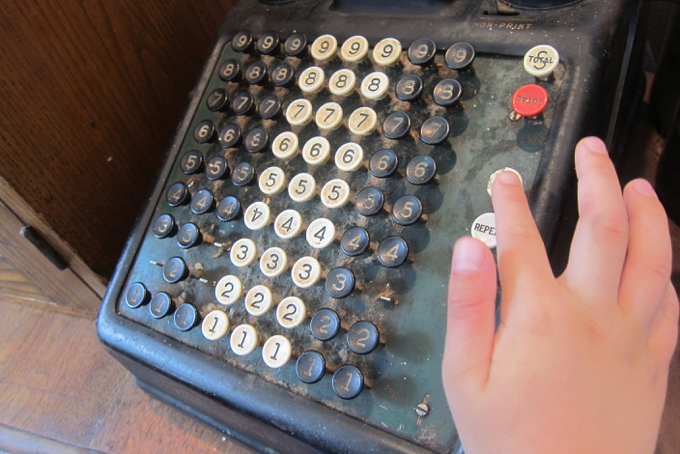 Let’s see… over there is a 1750 Daniel Burnap clock that was in working condition the last time someone from the Society checked. For added panache, sillouettes of the original owners came with the clock. This stuff has survived in remarkably good condition for centuries. Pretty cool. 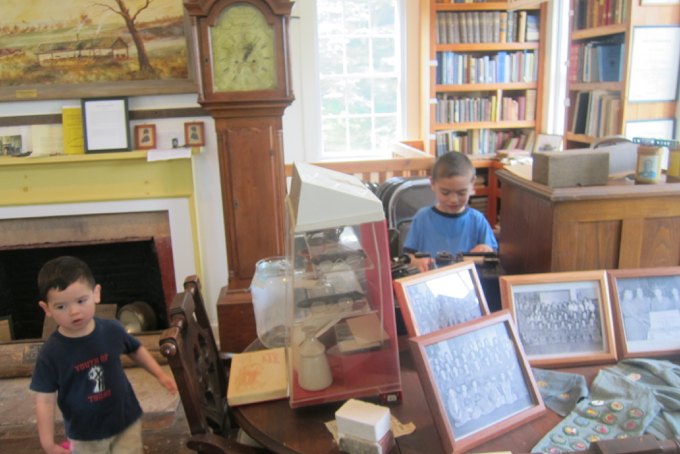 Uh-oh, Calvin’s looking a bit bored in that picture. I can’t imagine why. This place is a trove for little boys. Olde timey piano-like-things? 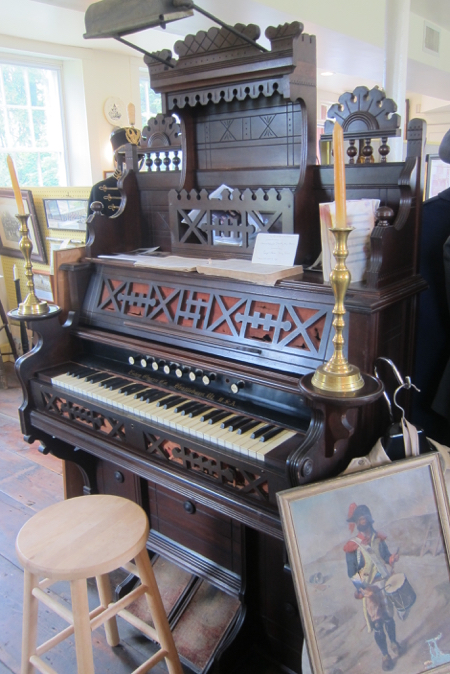 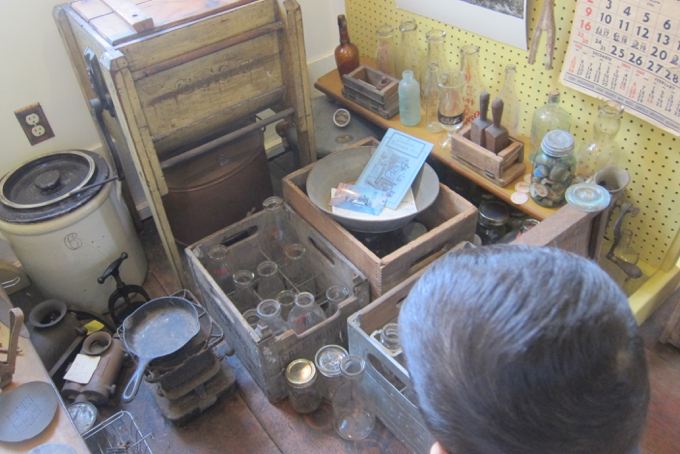 Super nice volunteers attempting to get Damian to look through one of those old timey stereoscope things that every town history museum seems to have? 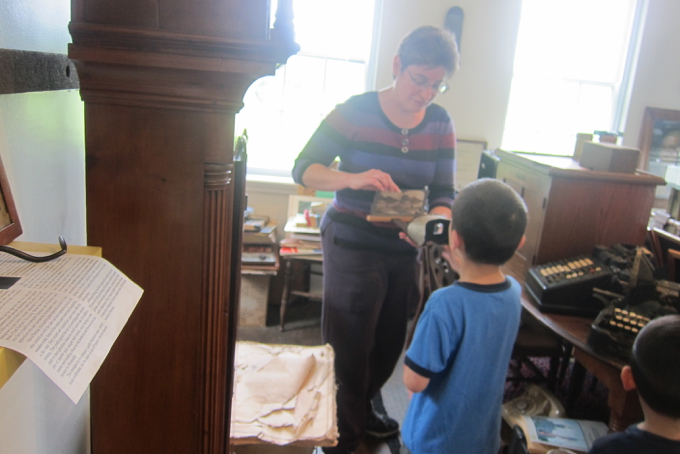 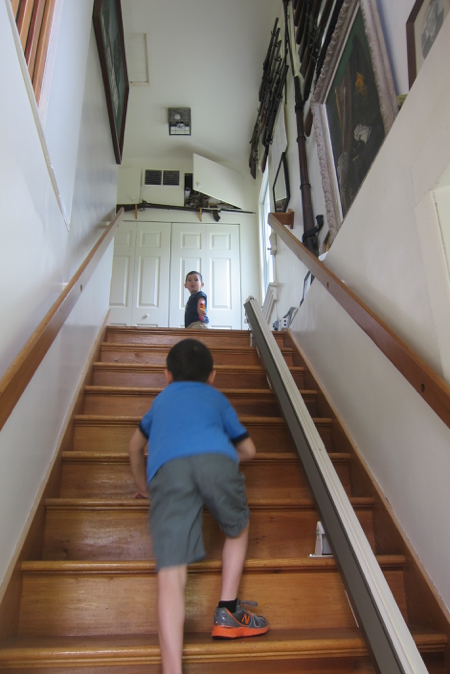 Look, I know you’re not going to take your kids to the East Windsor Historical Society complex this weekend. You likely have a town history museum in your town that has a very similar collection.

Heck, your town may have a complex of museums as well. I just hope that you DO take your kids to whatever that museum or museum complex is. At least once. Talk to the volunteers. Trust me, it’s pretty fun. 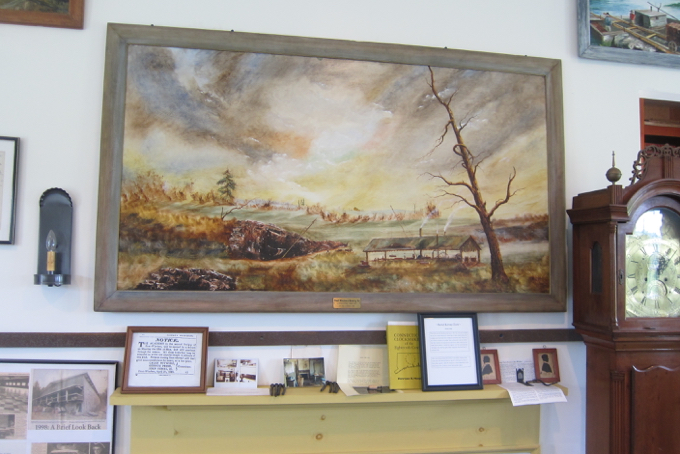