There are a lot of fire museums in Connecticut. Way more than you think – ten. Can you imaging how many fire museums there must be in, say, California? Probably nearly 100. 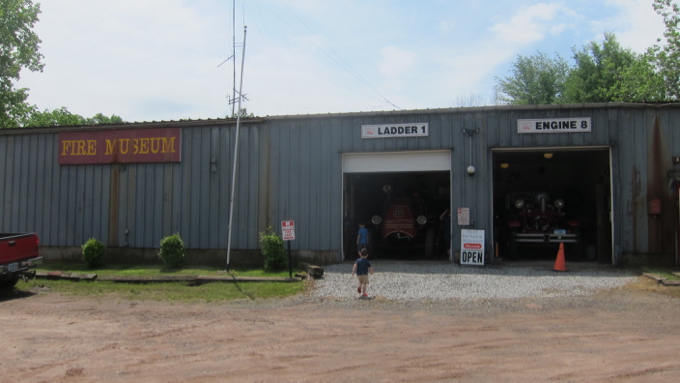 Many of Connecticut’s fire museums are rarely open or just sort of sections of town fire stations. Others are separated sections of other, larger museums like the one at the Carousel Museum in Bristol and this one at the Trolley Museum in East Windsor.

The funniest thing about this one is that there’s another museum sort of stuck inside it – the Connecticut Motor Coach Museum. Basically, come here for the Trolley Museum (and ride), stay for the Fire Museum, and accidentally see the Motor Coach Museum. 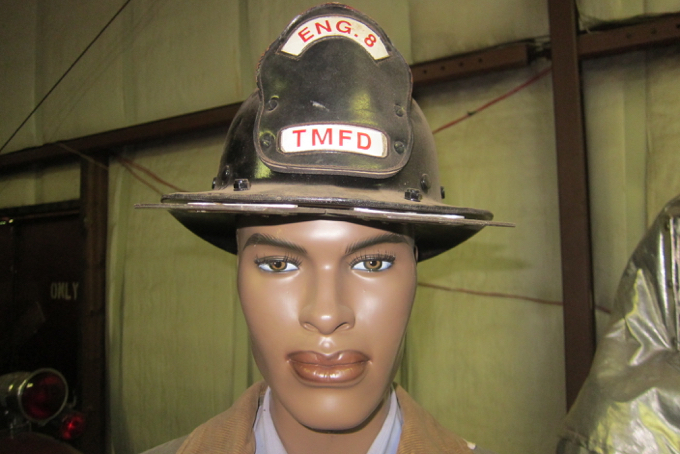 The Fire Museum is housed in a second corrugated steel shed behind the trolley museum. There are signs encouraging trolley visitors to check it out and I’d assume that the vast majority do so. (That means the vast majority also visits the Motor Coach Museum but don’t even know it.) 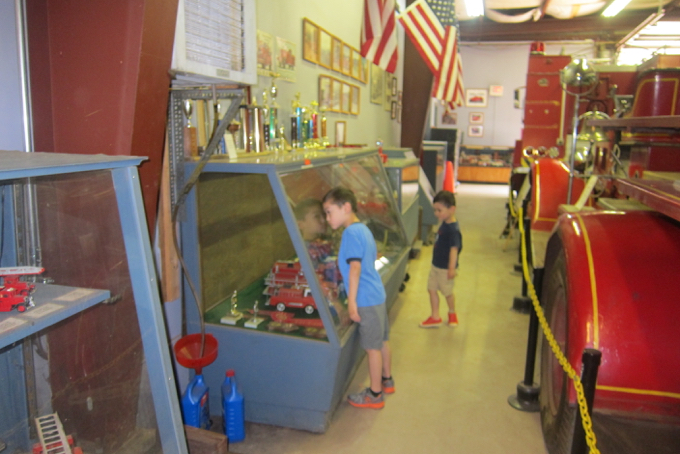 Let’s learn what this place is all about:

The Connecticut Antique Fire Apparatus Association, Inc. is the owner and operator of the Connecticut Fire Museum and Connecticut Motor Coach Museum located on the grounds of the Connecticut Trolley Museum. Organized in 1968 and later incorporated in 1971, the organization is dedicated to the preservation and appreciation of antique fire apparatus and associated equipment.

That’s all they’ve got for us online. At least they have much more up in East Windsor! 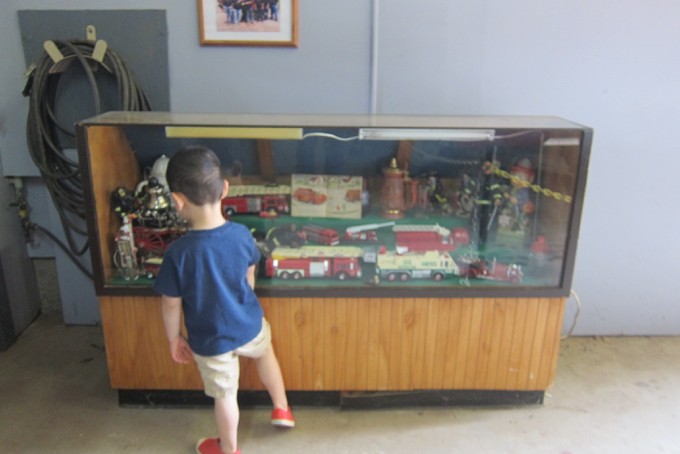 The Connecticut Antique Fire Apparatus Association has jammed as many fire trucks and antique fire-fighting things into this building as possible. When I say “jammed,” I mean jammed. And, quite frankly, none of the old trucks really stood out to me… then again, I’m hardly an olde-timey fire truck aficionado.

I do know that Ahrens-Fox was a big deal in fire truck production back in the day. (When you’ve visited several fire museums around the state, you pick up few things. This place has a 1929 Ahrens-Fox Pumper and I’m sure that’s a really cool thing. 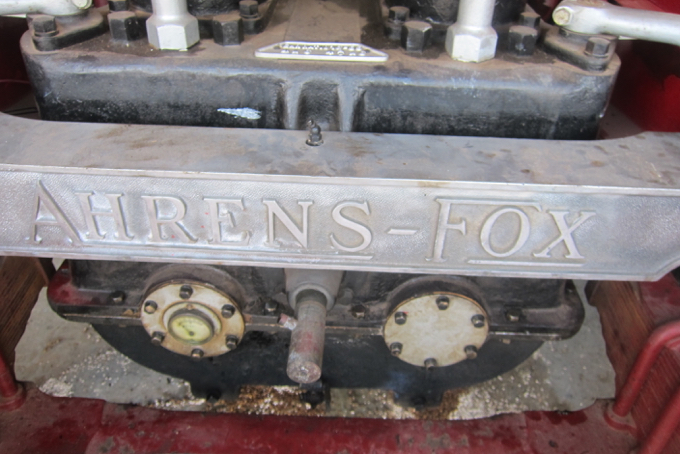 There are older pieces here though. Like a 1923 REO Pumper and two older American LaFrance Pumpers as well as an old Mack Pumper. Oh, they’ve got trucks from other manufacturers as well like Maxim, Seagrave, and Walter of course. It’s an impressive collection.

Especially impressive is an even older sleigh. Did they call it a “fire sleigh?” I hope so. This one is from 1890 from Newton, MA. 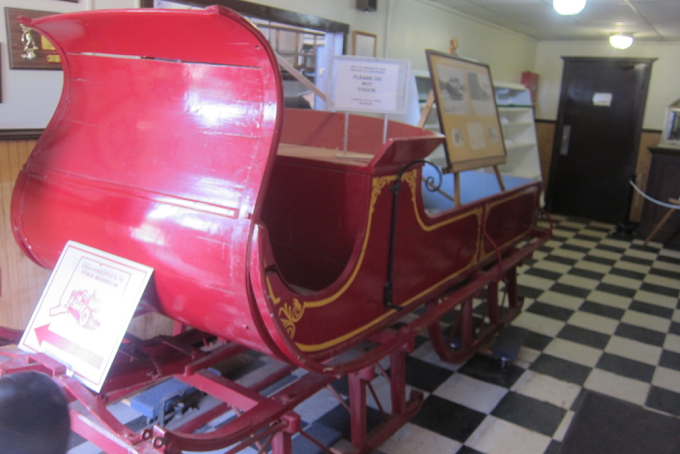 Besides the trucks, the Trolley-Bus-Fire Museum also has a bunch of fire fighting miscellanea. Like this: 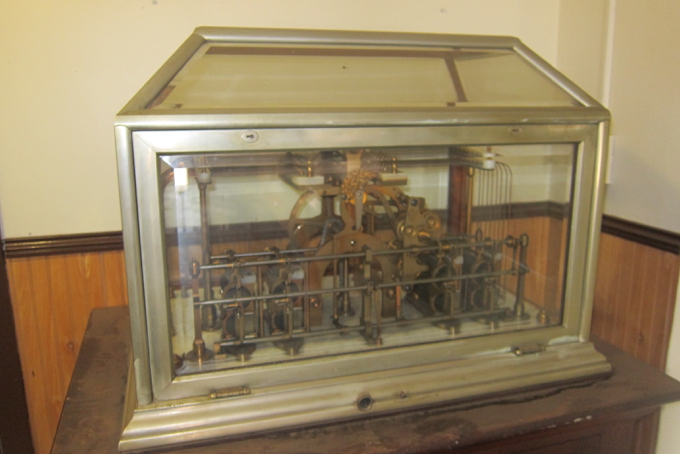 Oh snap, that’s an automatic fire alarm repeater from 1910! I was used at a Waterbury factory and would send the fire alarm signal from the private system over the public Waterbury system.

What else do they have? Feast your eyes on this: 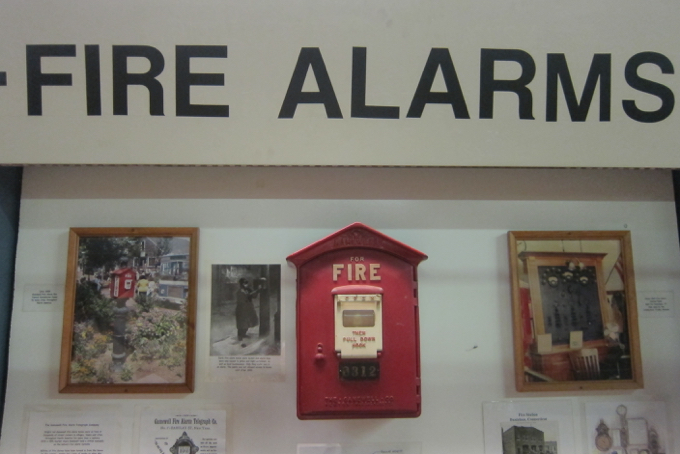 Yeah, okay, that wasn’t too exciting. What about this? 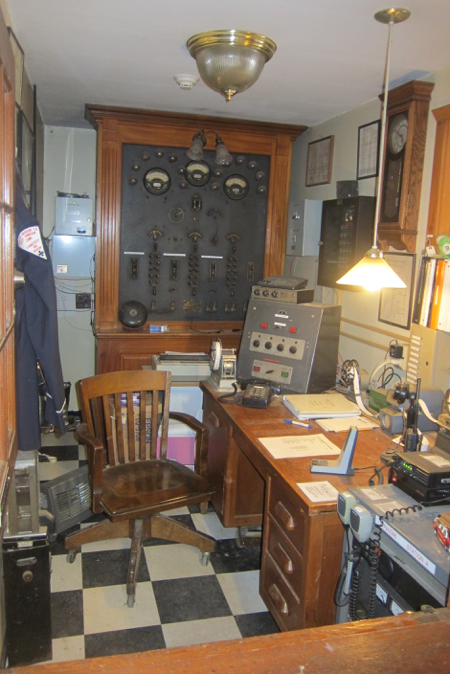 An old fire department control center? C’mon, that’s pretty cool. How about this? 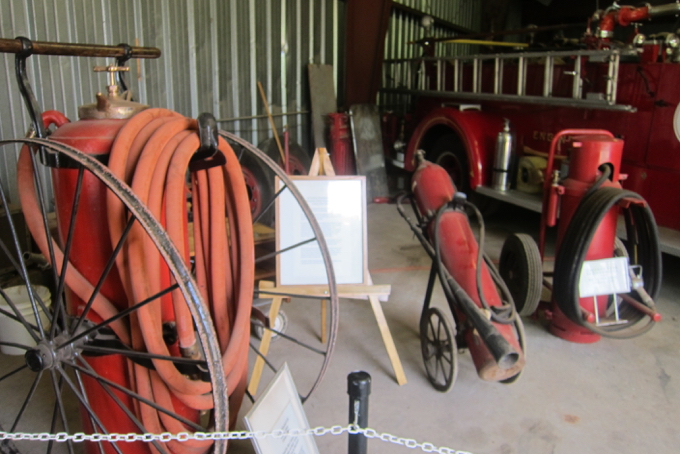 Yo, that’s a 100-pound wheeled fire extinguisher from 1920! The crazy thing is that there are warehouses and factories all over the world that probably still have these things ready for use.

Hopefully you no longer have any of these things lying around your house or factory: 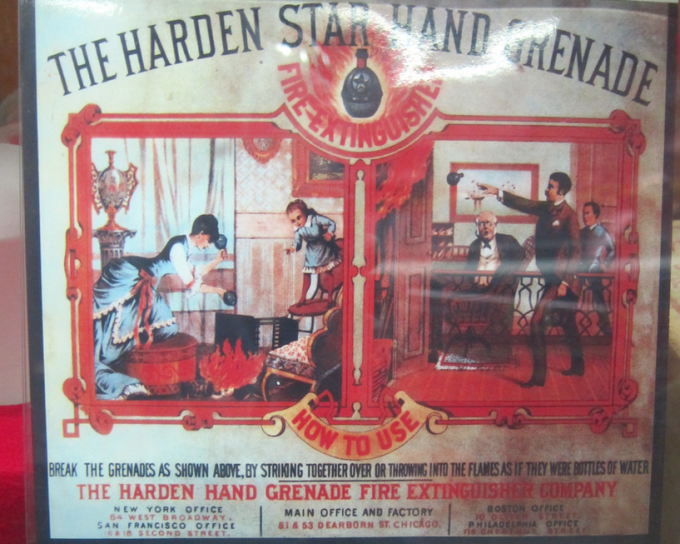 I’ve learned about carbon tetrachloride at previous fire museums. It’s nasty stuff that did a lot of harm to humans over the years of its use. But yes, a hundred years ago people kept maracas of the stuff around the house to smash together and throw at fires. While that sounds like fun, I’m glad we’ve moved on from that technology. 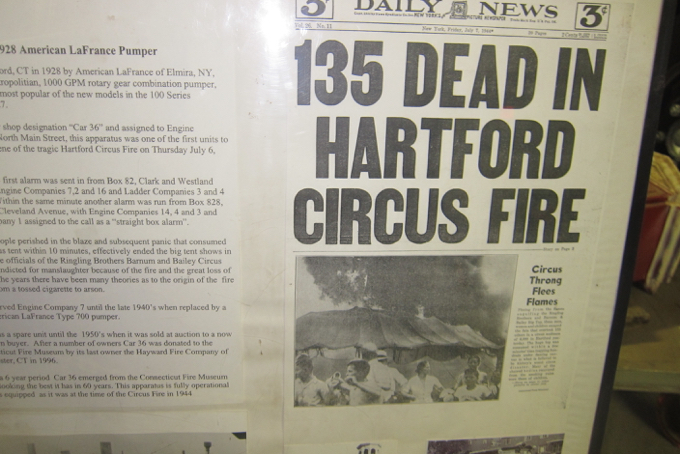 Aw man. Sorry to bum you out some more. Any Hartford County fire museum must have a bit about the worst fire tragedy in local history. And any Connecticut writer worth his salt must make mention of the Hartford Circus Fire anytime it comes up. It’s a rule. Let’s move on.

As I’ve said, there are a bunch of old firetrucks here. One I found particularly interesting was this one, a 1947 Mack 500 gallons per minute pumper. 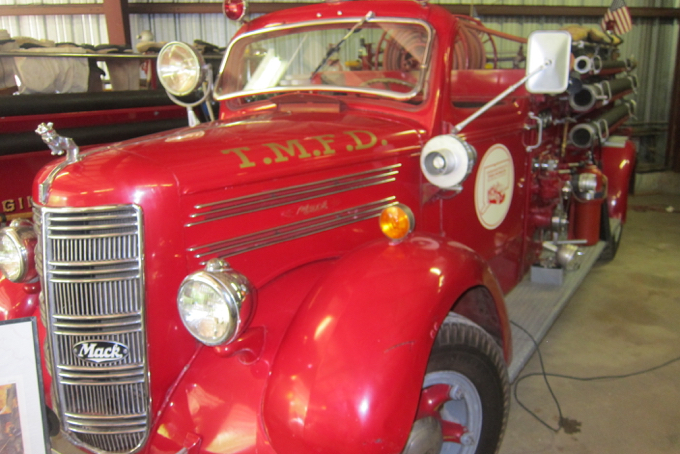 Assuming this blurry picture is of the correct truck (they all look the same), this is the official firefighting truck of the fire museum! In other words, if this corrugated steel warehouse with concrete flooring starts burning down, this truck is on hand to fight the fire. I can’t imagine that makes any practical sense, but there you have it. 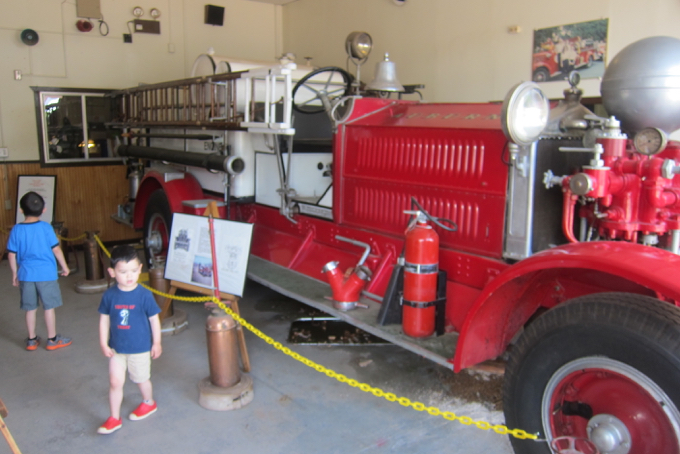 My boys enjoyed all the fire trucks and there are special “open truck” days throughout the year wherein kids (and adults) can sit behind the wheel of many of these wonderfully restored antique trucks. 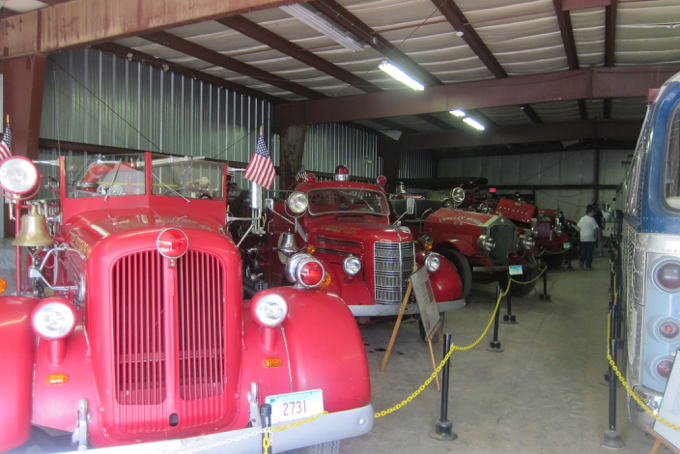 If your plan is to just come to the fire museum (and, of course the mixed-in Motor Coach Museum), I’m not sure how that works. Can you just circumvent the trolley museum? I’ll leave that up to you to decide.

I wouldn’t want to get anyone fired. 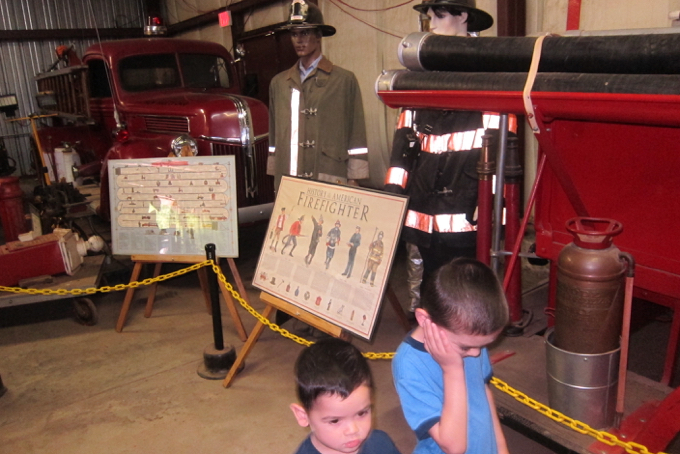