I have a love-hate relationship with the SoNo Brewhouse. First I’ll divulge what I hate: I hate the fact that it bills itself a “brewhouse” but doesn’t actually brew any beer. This is especially aggravating because they feature two giant “gleaming copper kettles which are one of the many attractions at the Brewhouse. Restored to their original operating condition, these kettles were originally in an old brewery in Alleen, Germany,” sayeth their website. 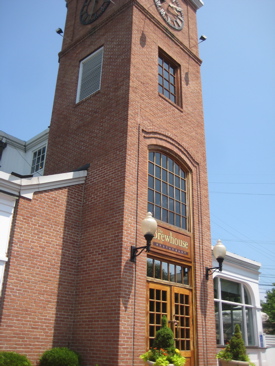 They are currently behind glass and are not in operation. I think the first couple times I went here I was under the impression they made some beer in-house – never mind that I noticed that nothing proprietary was on tap, but remember, I’m dumb.

Now that I’ve read a bunch of online reviews of this place, I know that my lament is a common one. Site after site, review after review says the same thing: The name is misleading and it’s a shame they don’t brew beer here anymore.

Aha! I said “anymore.” Indeed, The New England Brewing Company used to ply their craft here, but moved up to Woodbridge back in the 1990’s. Then it was renovated, went through a German-themed phase, and is now a family friendly restaurant. 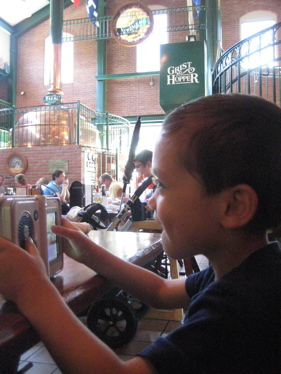 Aha! I said “family friendly.” The last time I was there was a nice Saturday afternoon and before entering, we were a bit hesitant to bring in the baby and the Damian. After being led to our seats, I felt pretty silly as – literally – every single table but for one had at least one little kid in tow. So here’s the “brewhouse” that isn’t a brewhouse but is actually a family restaurant. Go figure.

(Now, I do realize that this place is cavernous and one of the cheaper and non-frou-frou options in SoNo. It’s also around the corner from the excellent Maritime Aquarium which brings the families.

So, you’re rightly asking yourself right now, why does SoNo Brewhouse have a page on CTMQ if they don’t brew beer and they’re not a “best of” anything? Good question… Though I’m not sure the answer will leave you satisfied. You see, it’s not even a or “first” or “most.” It’s a “second most.” And even that comes with hesitant language. 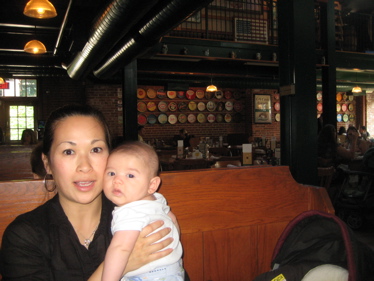 But to me, their self-lauding accolade is so random and utterly unverifiable that I felt I’d give them the honor of a CTMQ page. They deserve it if only for their strange bravado.

What’s this?! I no longer see the self-lauding accolade on their website! Sigh. In fact, it just took me far too long to find it mentioned elsewhere online, and only then it’s some old epinion.com review (long since gone from the Internet now in 2020 and beyond).

But I know I’ve read it elsewhere and even saw it on TV once not too long ago. Here it is – are you ready for this? The SoNo Brewhouse boasts the second largest collection of brewery related memorabilia in the country!

I’ll give you a moment to gather yourselves. Note, I don’t believe this to be true for a second and its disappearance from their site tells me that they, too, probably agree. Oh well, in the interest of giving this page purpose, there is a lot of old timey brewery stuff here. Beer trays, barrel tops and old beer signs. Notably, they focus on long-gone Connecticut breweries – of which there were WAY more than I ever thought.

There are informative signs sprinkled throughout the place giving historical information on a lot of the old breweries which I find really cool every time I stop in. Some of the best stuff is on the way to the bathrooms downstairs, believe it or not. The upstairs dining area’s walls are just covered with brewery memorabilia. I’m never a fan of looking over diners’ shoulders anywhere, but you may choose to do so if it’s crowded – and you have no manners.

I’ve taken a few pictures of random stuff in here over the years… Good luck to me finding the one I really want to find – of an old Aetna Brewery beer tray or sign or something. If you see it on this page, you can be sure that I’m one organized dude with a creepy memory. 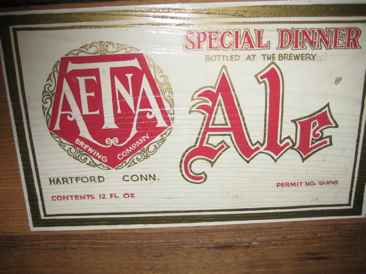