This page is kind of amazing. It highlights what makes writing CTMQ so difficult… and so easy. I’m writing this paragraph in December 2019 after realizing how hopelessly outdated the original 2012 NEBCO page was. I’ve done my best to remedy the situation. And I’ll revisit them and this page in 2023 after the brewery has moved again to New Haven. 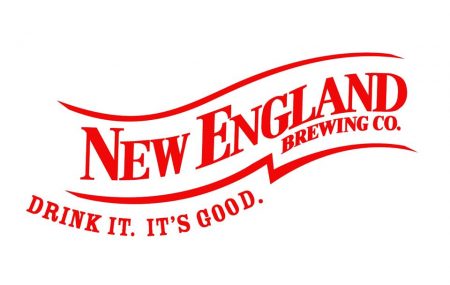 It’s kind of a rule among us old heads in Connecticut once a year to say something like, “I remember going to New England Brewing in Norwalk when Phil Markowski brewed there. Man I loved that oatmeal stout and I wish they’d make it again!” 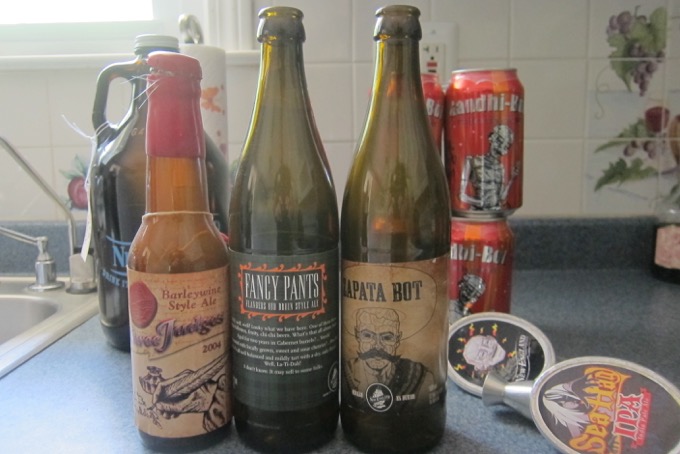 So there you have it from me. that place closed and Rob Leonard leased a small spot on Selden Street in Woodbridge and set up shop, just north of the New Haven border. NEBCO brewed Atlantic Amber and the oatmeal stout and that was pretty much it back then. I’m pretty sure Rob had no idea at that time that his little brewery would attain legendary status in just a few short years.

Once settled in at Selden Street, NEBCO plugged along like “microbreweries” did then. Word of mouth, local taplines, and tiny distribution deals. I think they were distributed beyond New Haven County once in a while, which was incredibly rare in 2003-2009 or so. Only Hooker in Connecticut was doing that. 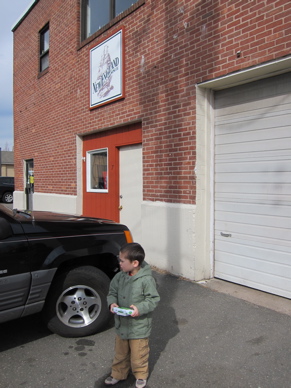 In fact, Hooker was the only brewery with any semblance of a “scene” in the early 2000’s. Cottrell and Olde Burnside had no taprooms or samples for the most part, and NEB was somewhere in between. But by the latter part of the decade, NEB vaulted to the top of the Connecticut heap and was regarded as one of the better breweries in the region – despite the lack of a taproom.

And that’s when I started stopping in whenever I could. Gone were the days of the Atlantic Amber bottles and the old, quite average Sea Hag IPA. NEB was a perfectly fine tiny little unassuming brewery in those first years, but something changed around 2008. Craft beer in the US was still small potatoes, but a few young and creative brewers were beginning to make waves. One was Matt Westfall, who took the opportunity to join the team in Woodbridge rather than the offer he had to head down to Dogfish Head in Delaware. Once Matt was given more of a creative lead in 2009, I began visiting the brewery more and more. 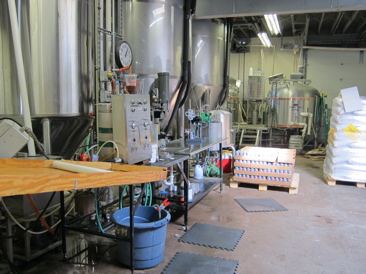 Back then, the brewery was somewhat difficult to find. The parking lot had room for maybe five cars. There was a tiny sampling bar to the left with a few stools. That was it. NEB was one of the first craft breweries to can their beers, knowing early on that canning was a) cheaper, b) a single person can move a gigantic pallet of beer cans around without issue and c) canning quality and local-only distribution counter any “cans = poor quality” argument. These guys used to can by hand… and did so for quite a number of years actually. In fact, they’d invite friends to help them out on occasion; beer would fill a can and then the tops needed to be placed on and seamed. NEB did this well into the years after they became quite popular, which always blew my mind. Years that they were listed on Beer Advocates “Top 20 Breweries In America” lists.

And back then, I could bring Damian to play with the brewery dog because we were the only people there. 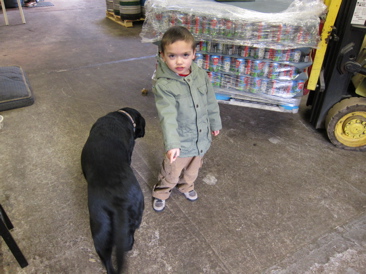 When you visit, they’ll most likely have three taps running. It doesn’t really matter when you go, or what beers they have on tap because they are all excellent. I had the very good fortune of visiting once with Ghost Pigeon Porter, Imperial Stout Trooper and Gandhi Bot DIPA flowing. You really don’t get much better than that line up at any brewery of any size anywhere. 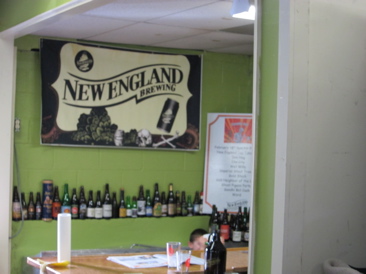 While not many would be pleased with a three-beer line-up these days, I don’t think I’d complain about that one. Here’s another blurb from 2012 regarding one of NEB’s most highly rated beers, Fuzzy Baby Ducks:

They had a few barrels of FBD left and were allowing patrons to purchase a maximum of 2 growlers each[…] I went inside to find more people than I’ve ever seen at the brewery (about 25), with most of them only there for the Fuzzy goodness. Wow. I got my growler filled ($10) and hit the road again.

This passage is striking because it was the first time in my life that I waited in a line for beer. (The line was like 5 people and the other 20 were milling about.) I remember thinking that we’d reached the apex of craft brewing at that point. People waiting in a five-minute line for a particular beer! It was just bananas to me. 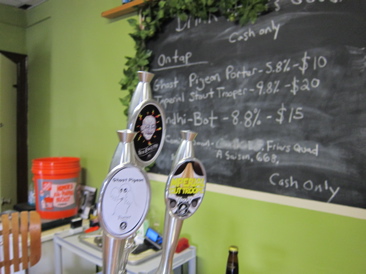 And thus began NEBCO CrazyTime. With Matt’s arrival in 2007 and his first beers being released in 2009 – Alpha Weizen and that little something called Gandhi Bot – NEBCO was on the map. Matt reformulated the tired and rather bad Sea Hag IPA into being THE beer to have in your fridge at all times.

NEBCO was on the new hops train before anyone else in Connecticut. Citra, Mosaic, Galaxy, Nelson Sauvin. And some of us were on the NEBCO Train before it got really, really crowded. The IPA craze was starting, we had a brewery in Woodbridge making some of the best and boundary-pushing beer in the nation, and I had become friends with them. 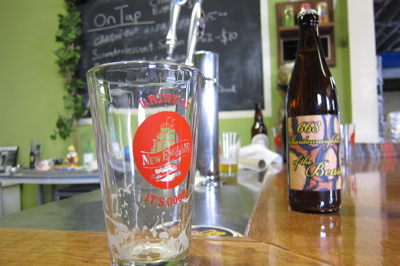 Beer after NEBCO beer was great. Distribution ebbed and flowed, the beer names and much of the attendant artwork by Craig Gilbert became a “thing,” lines came and came some more. Canning and bottling the darling beers was always a rumor, some Indians offended by the robot Gandhi on the Gandhi-Bot can, Fuzzy Baby Ducks became a phenomenon when it was rated the #1 IPA in the nation, George Lucas sent a cease and desist letter regarding the Imperial Stout Trooper… Life was good at Connecticut’s best brewery.

Too good for the small Selden Street space. NEBCO was on the move, 500 yards away across a car dealership parking lot. 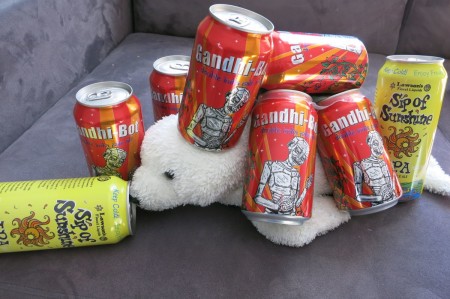 The move to the new space went pretty quickly, and with much more brewing capacity and a larger patron space, NEBCO was flying high. Other breweries were opening up all over the state, but the king remained the king.

Special releases were events in at the Woodbridge brewery, and the car dealership likely didn’t know what hit them. Want to buy a Jaguar? Watch out for the 300 beer fans in line. NEBCO was Connecticut’s only “line brewery” of any consequence, and it was justified – insofar as one justifies standing in line for beer. 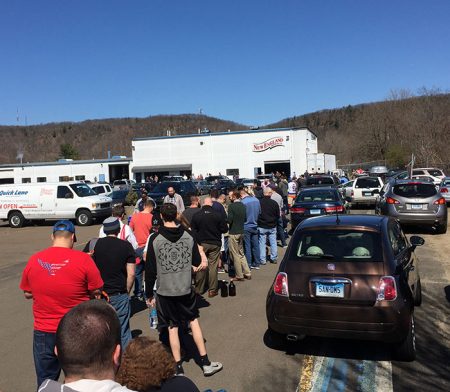 Thinking back to that day, just a couple years prior, incredulously waiting for five people ahead of me, I was happy for my friends in Woodbridge. I never really got to know Rob, but Matt and I became fairly close. (Close enough that I, ahem, never stood in any of those lines.) One time – and I loved this – after Elm City Lager had a long hiatus, they did a special release of it in cans.

It’s a lager. Straight up. But the NEBCO name carried enough weight that yes, there was a line. Perhaps the only time there has been a line for 12-ounce cans of lager… anywhere? Anytime? Part of me thought that half of that line was 20-somethings who didn’t even know what Elm City was; it was NEBCO and it was a can release and darnit, they were going to stand in the line. (A week later it was available in stores.) 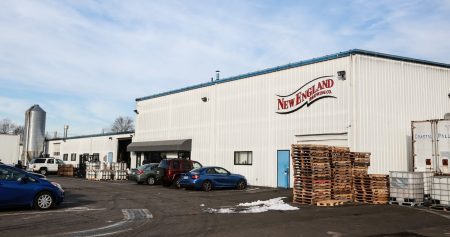 Speaking of store availability, one thing NEBCO has done since the beginning is price their beers right. Sea Hag was, is, and hopefully will always be one of the most affordable, delicious beers one can purchase in the state. Not only that, they’ve always made it a point to fill the cans to the brim. I heard this started back in the by-hand-canning days as a way to insure no oxygen got into the cans. Unwary customers were sometimes surprised at just how full their Sea Hags were, and appreciative folks like me realized we were getting an extra half-ounce of beer.

(This, during the period of time when crap breweries were giving consumers an ounce of sludge in their beers. I’m overthinking this, but always felt that NEBCO was giving the finger to those jokers in a very subtle, barely perceptible way.) 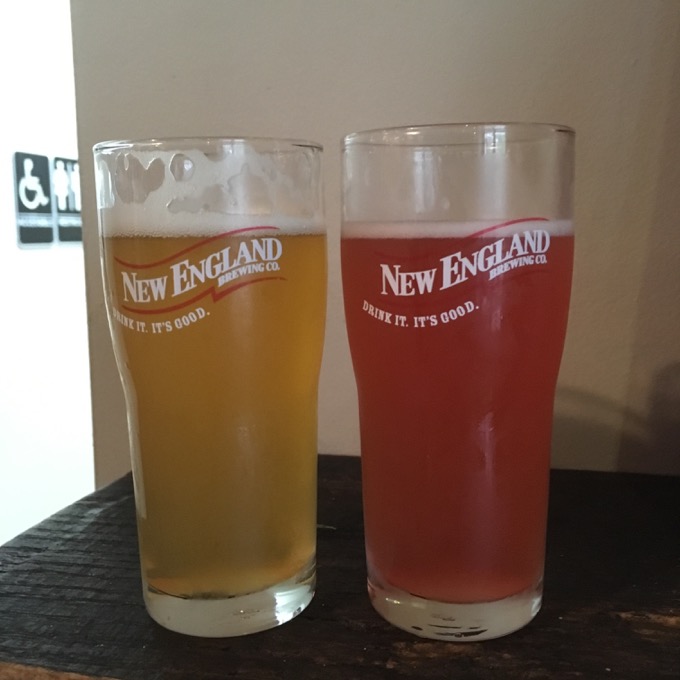 NEBCO’s slogan is “Drink it. It’s good.” Perhaps because of their focus and commitment to the beer, the taproom at the new spot was still kind of lame. Small, poorly designed, and a bit slow, they were behind the times with new breweries opening full-on bars with seating and “experiences.” Suddenly, despite a top tier product, NEBCO was losing a bit of ground.

Not only were they losing ground to some local and regional upstarts, they began losing staff. Not just any staff, but none other than Matt Westfall – the guy responsible for, well, pretty much all of the brewery’s product perfection. Matt announced he was opening his own brewery and subsequently left Rob and NEBCO in the fall of 2016. 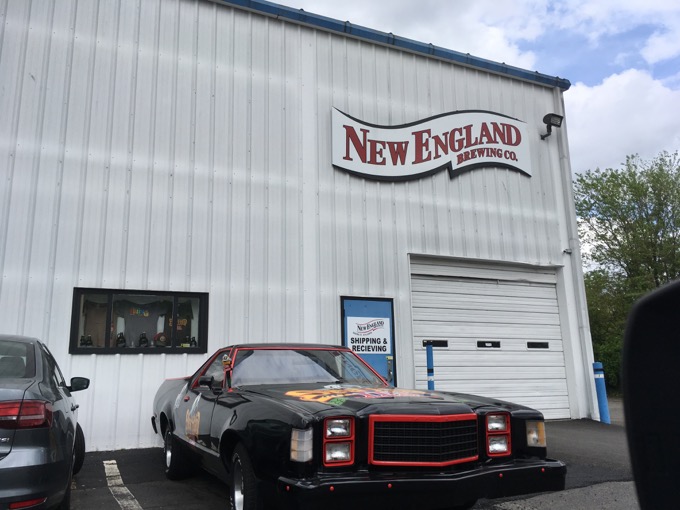 Wow. This was Gretzky to the Kings. Lebron to the Heat. The local brewery scene was shook. Head brewers leave breweries fairly often, but this was a big one.

A few guys under Matt had been trained well and NEBCO weathered the storm. Not only that, a wall was knocked down and holy cow, a rather nice new horseshoe bar was revealed. High-top tables, games, and even a kiddie table! A somewhat separate growler station and to-go area was incorporated, and NEBCO was now on par with the newer breweries. 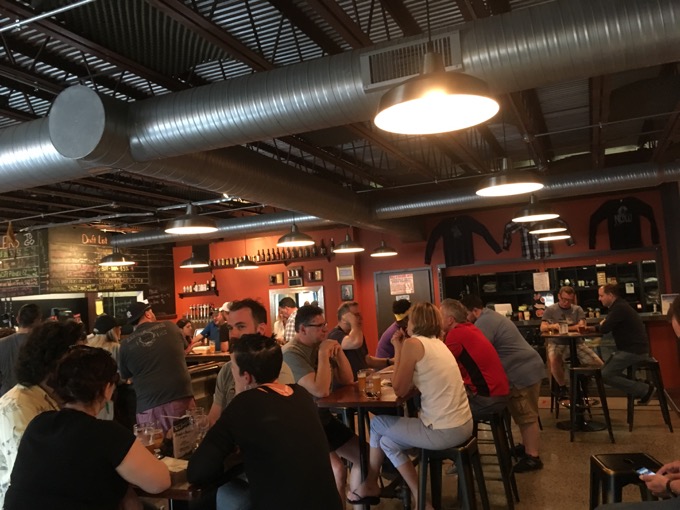 Then a couple of those guys who were trained well under Matt left to start Tribus Brewing in Milford. NEBCO pulled out all the stops, like hosting church at the bar, and – what, you think I’m kidding? I’m not. They hired Marty Juliano away from Sierra Nevada to oversee business development at the brewery and somehow, the beer quality remained high.

NEBCO is still in the top 10-percent of Connecticut breweries. I’ve watched them go from a little fish in a tiny pond, to a massive fish in a small pond, to a big fish in a massive pond, and I’m happy for Rob and the crew down there. I no longer make it a habit to stop in any time I drive through the tunnel on the Wilbur Cross, but that’s not because they’ve fallen off. 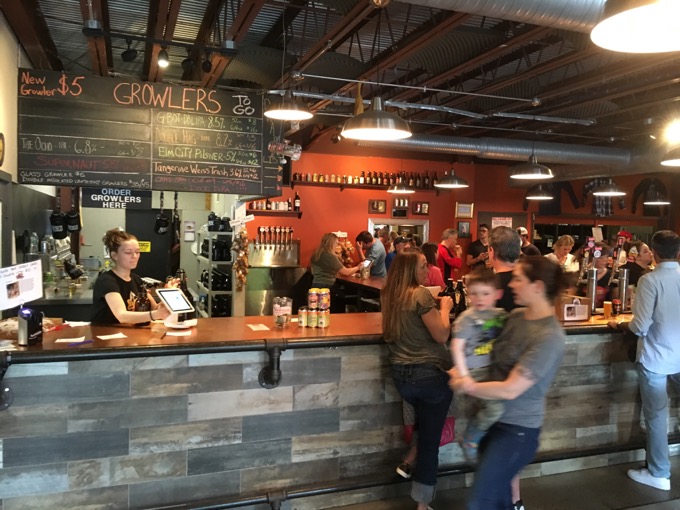 They still have big releases, and the original Fuzzy Baby Ducks now has a whole slew of offshoots. Little, double, triple, and who knows what else. NEBCO does big beers and little beers and while I’ve tired a bit of the cartoony labeling and juvenile antics in my old age, I still love the brewery. Elm City, Gandhi Bot, 668, and Stout Trooper are all still brewed and all are still great. 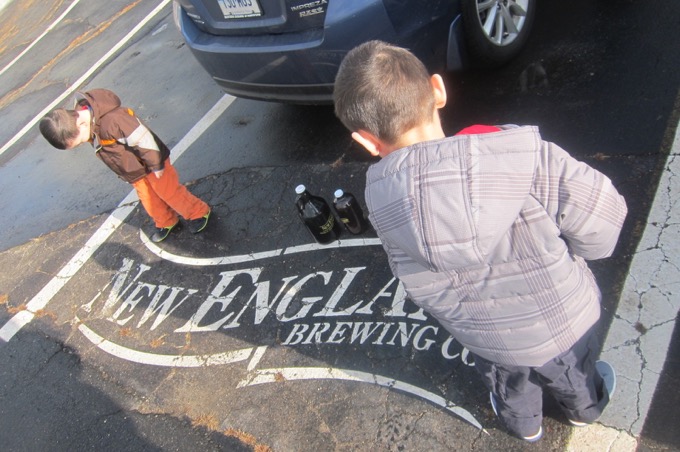