The COVID-19 Pandemic is a strange time. I’m writing this in early August, now five months into this nightmare… thinking about the year that should have been. And how much we simply couldn’t do. Sigh. 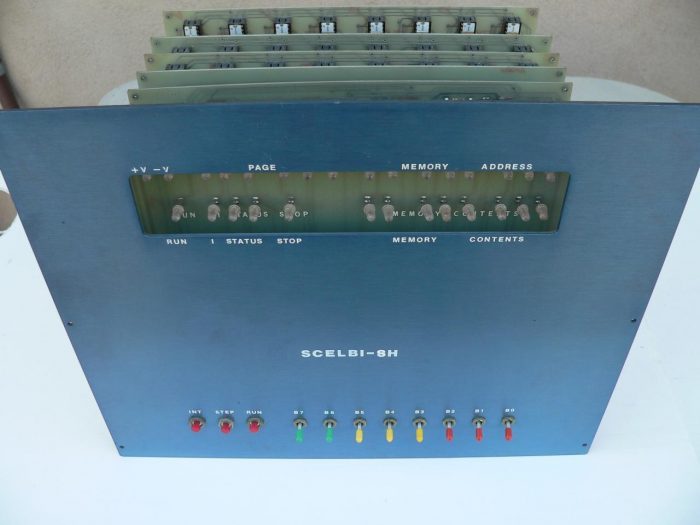 Way, way, way down the list of “stuff I didn’t do” is, of course, visiting museums for the purposes of CTMQ. They are slowly reopening (for now), but I haven’t been to one in these five months.

Until now. For I just “visited” the SCELBI Computer Virtual Museum! And what I thought would be a quick visit took me down a nerd rabbit hole for far, far longer than anticipated. Connecticut has a few virtual museums – true virtual museums that only live online, not, like, virtual during the pandemic virtual museums – and a few have “closed” since I first found them maybe a decade ago.

My journey to SCELBI (pronounced “sellbee” by the company founders, “skellbee” by everyone else) began when reading the Wikipedia page about Milford:

One notable small business located on the Boston Post Road during the 1970s was SCELBI Computer Consulting, credited by many as being the world’s first personal-computer manufacturer.

Say what? That seems rather extraordinary! Then I remembered that I have a page here on CTMQ about the “First Business Computer in the US” that was created in Norwalk. And that no one really celebrates that either. C’mon people! 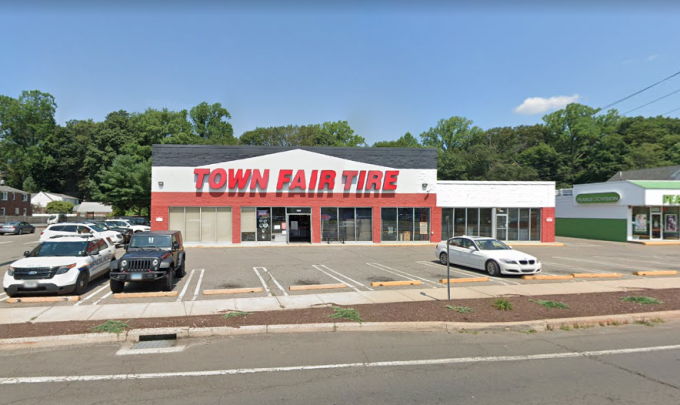 Where it all began as it appears today, in 2020

The Wiki sentence had no reference, so I went referencing. And that became the nerd rabbit hole previously mentioned.

The early 1970’s were an exciting time for computer hobbyists. These were the engineers and HAM radio kids who put the pieces together before Bill Gates and Paul Allen created a BASIC computer for the Altair in 1975 and before Steves Jobs and Wozniak created the Apple I in 1976.

(In fairness to Gates and Allen, they were tinkering with this stuff in 1972 or so.) The more I read, the flimsier the “first personal computer manufacturer” claim became. (I’ve also read it as “First Advertised Personal Computer Using a Microprocessor.”) SCELBI was the first to build what they built… but from what I gather, they did build one of the best AND they did market it to hobbyists AND they did make and sell about 200 units, so… I’m calling the claim legit. 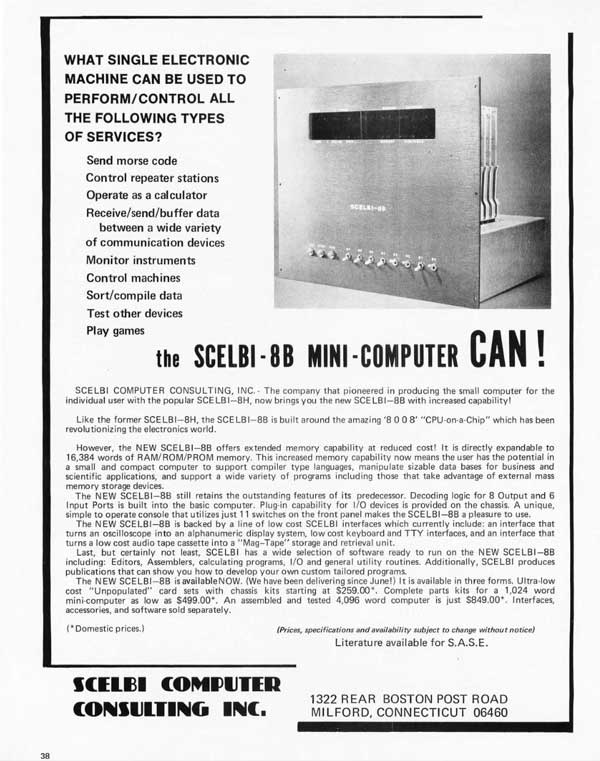 The ad above was early, but the very first advertisement for a personal computer based on a microprocessor appeared in the March 1974 issue (p. 154) of QST, an amateur radio magazine. The ad was for the Scelbi-8H. Whoa.

SCELBI Computer Consulting was located on Boston Post Road in a building that now houses a Town Fair Tire. The company name, SCELBI, which stands for SCientific-ELectronics-BIology, indicates that the business had a plan to penetrate specific markets which were not necessarily hobby oriented. Which was pretty revolutionary back when the only people who cared about building home computers were hobbyists. 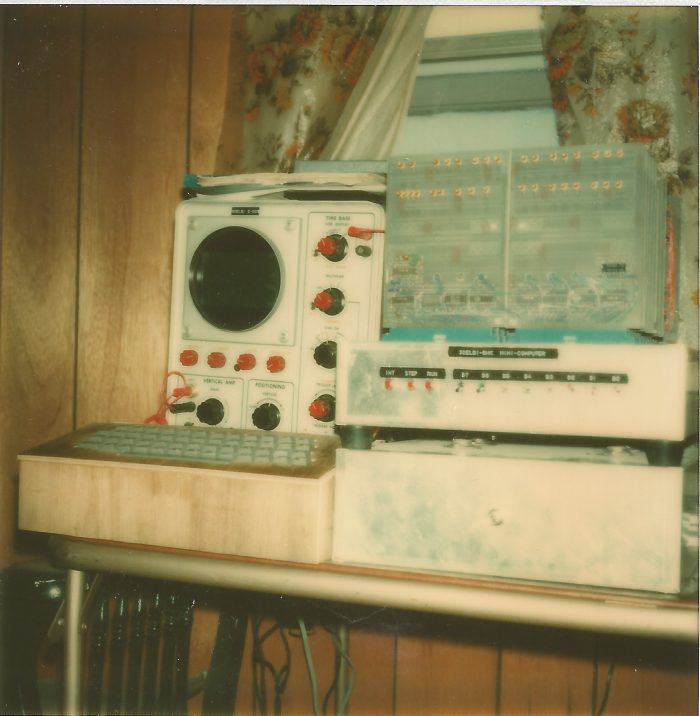 The 8H prototype in Nat’s lab

The 8H was for hobbyists and the 8B was for businesses. But what were they? And why is this important? And who made these things? And why have you never heard of them?

SCELBI’s founding father, Nat Wadsworth, was a design engineer with General DataComm Industries in Danbury when Intel gave a seminar nearby on the 8008 microprocessor. But when he and several other young engineers tried to talk management into simplifying products with the 8008, they got nowhere.

Wadsworth, intrigued by the capabilities of the 8008, cornered several other company engineers and asked, “Why don’t we design a nice little computer and each build our own to use at home?” Two of them agreed, and Wadsworth and Robert Findley designed most of the system. 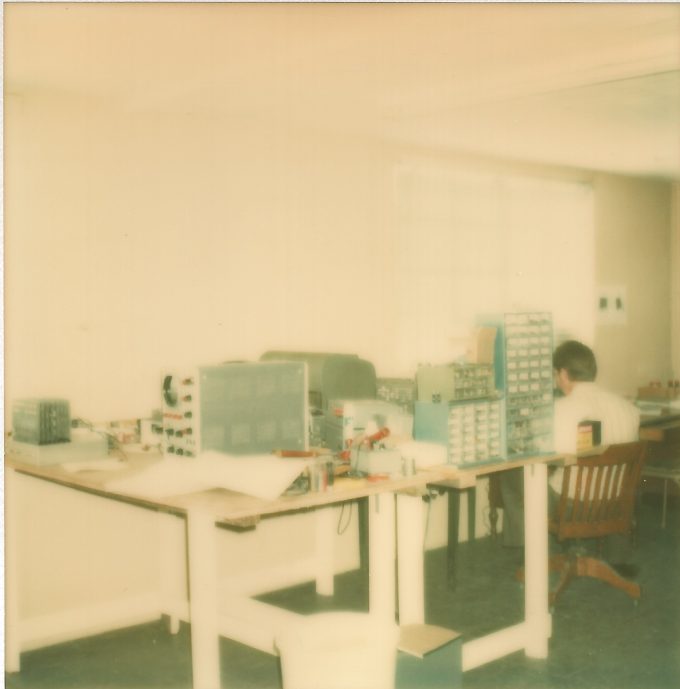 Wadsworth quit his job in the summer of 1973 to work full time on the computer. SCELBI was incorprated in August; the name stood for Scientific, Electronic, and Biological, “because we saw this computer as capable of going into any of those areas.”

Wadsworth worked up to 18 hours a day turning the prototype board into commercial PC boards, and private investors started lining up. But several months later, in November 1973, at the age of 30, Wadsworth had a heart attack. This stopped everything for a while, and the investors disappeared. But Wadsworth recovered, finished the design, and the company started advertising. “We chose QST because we knew that many hams were dyed-in-the-wool electronic enthusiasts.” All that came with the computer were the assembly instructions; the user was expected to know–or learn–something about programming.

Response to the ad was large, so Findley joined the company, others were hired, and then in May 1974 Wadsworth had a second heart attack. This “pretty well removed Scelbi from having a chance at making it big in those days, and it never became a major factor. But we continued to limp along. It became–for me, anyway–a different thing. I started doing it more for love, for the joy of still being alive, than for any ideal of a commercial enterprise.”

While in the hospital, Wadsworth started writing a book, Machine Language Programming for the 8008. Before he knew it, his company was doing better with the manuals than the actual computer kits. The company shifted away from hardware and moved into books and software. 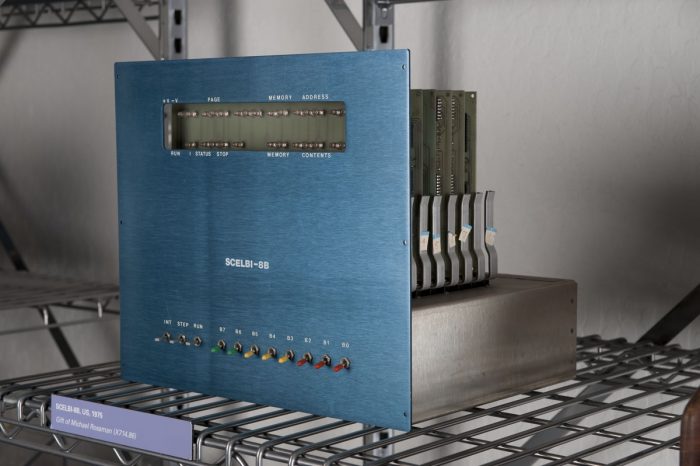 That is a fine looking machine

“Altogether we sold about 200 computers–half assembled, half kits.” Half were Scelbi-8H hobby computers with up to 4K of memory; the rest, differing mainly because of more memory (up to 16K), were Scelbi-8B business computers. The Scelbi-8H first went on sale March 1974, the 8B in April 1975.

“For that time, we had a very sophisticated system, a complete system. We had a tape cassette interface that actually worked a lot better than the ones MITS started selling. We had a CRT based on an oscilloscope, and Teletype interface, and we developed a combination monitor, editor, and assembler in ROM.”

“During this evolutionary period, we got the idea for the cookbooks. The first two were written by Bob Findley. The first was for the 8080, patterned after my machine language programming book. What we had was an engineer’s handbook that presented the instruction set and utility routines. We had a full floating point package in there, which I had developed for the 8008. That was an extremely successful book. Tens of thousands of the cookbooks have been sold in virtually every edition we put out. It became a classic.

Wadsworth and Findley never got the recognition they deserved. MITS is often cited as the first company who made a mass-produced computer, the Mark-8, but it wasn’t a commercial product and Wadsworth says it was based off of their SCELBI work.

And I know nothing of MITS, but check this out: Wadsworth kept his notes from the very first kernel of the idea in 1973 at Cook’s Restaurant in Darien. It’s fascinating stuff. Or at least I think it is… as if I understand any of it.

The museum has all the SCELBI literature. Original schematics, the first newsletters, the early ads… everything. Like how to build an interface with an audio cassette and use it to record programming. Brilliant: 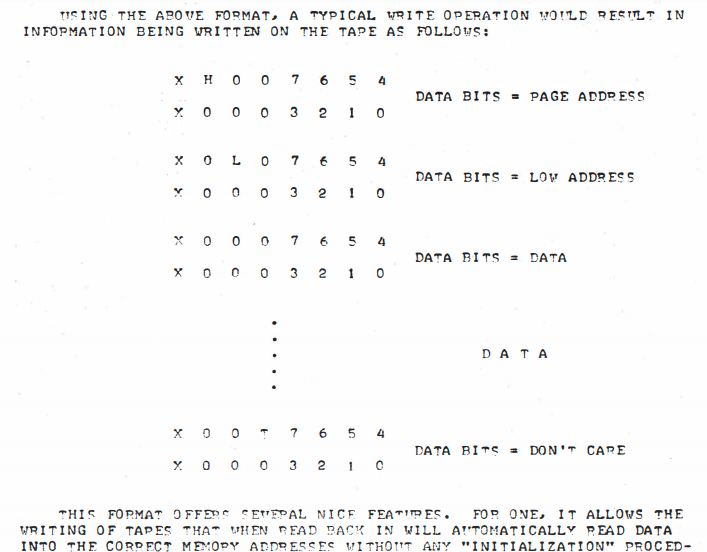 And hey kids, with your Minecrafting and PS5 Grand Theft Auto… check out where your games began. SCELBI created “Galaxy Game” which… doesn’t look very fun, but it’s still cool as heck these guys thought of gaming with their devices.

I really hope the links on this page continue to exist for a long time. I’ve tended to stop linking outside stuff on CTMQ because they always disappear or change. But since this is a virtual museum, it’s sort of paramount that they stay online. So if you’re reading this in the future and these are all dead links, I’m sorry.

The city of Milford should at least erect a plaque on a sign at the Town Fair Tire. I’ve spent a lot of time reading about SCELBI and Altair and MITS and early hobbyist CPU design and how they achieved memory back when I was a baby. It’s fascinating stuff and obviously completely changed the world. That one of the true pioneers worked out of a small building in Milford is awesome. And a big thank you to the people who have kept the names of SCELBI, Nat Wadsworth, and Robert Findley alive. 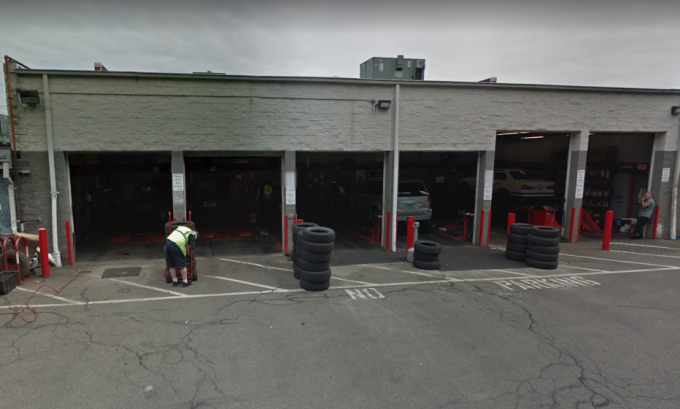