“The statement that a hydro-electric plant can pump its own water supply sounds absurd on the face of it, yet this is virtually what happens in the case of the Rocky River Hydro Plant…”
– Chief Engineer Paul Heslop, Connecticut Society of Civil Engineering meeting, 1928

Sometimes, my recall for random stuff around Connecticut surprises even me. There I was, driving up route 7 in New Milford at dusk on my way to an overnight camp and hike along the Appalachian Trail. In the near-dark, I passsed a brick building that I immediately recognized as something CTMQ-worthy. I found my way to the shelter for the night, slept on it, then hiked on it the next day. 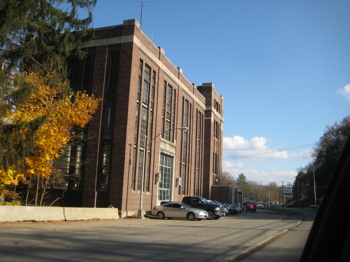 Somewhere while climbing 10-Mile Hill in Sherman it came to me: That was the Rocky River Hydroelectric plant which is not only one of Connecticut’s American Society of Mechanical Engineers Historic National Landmarks, but also the only American Society of Civil Engineers National historic landmark in Connecticut as well. Wow, I knew I had to make a small detour the next day to get some pictures!

Once again, I had no idea why this place was remotely special. “Just an old power plant,” I thought. While that’s technically true, this plant was truly groundbreaking. For more, I turn to the engineering nerds to explain why.

Turns out that it’s an early example of the pumped-storage principle at a power plant. More importantly, after the recent beating CL&P have taken (Tropical Storm Irene, October snow storm), it’s nice to read something positive about the company. Even if it’s over 80 years old.

The Connecticut Light & Power Company pioneered the use of pumped storage in the United States at this hydroelectric station. First operated in 1929, the Rocky River Plant had two reversible pumps that somewhat resemble large hydroelectric turbines. This permitted significant improvements in the system efficiency of the company’s network of hydroelectric and thermal-electric power generating plants. Water is pumped uphill through a penstock and stored in Lake Candlewood. When demand reaches a peak, water is released through the same penstock, and the motors driving the pumps reverse to become generators to produce electricity. The original penstock, built in 1927, was restored in 1963. 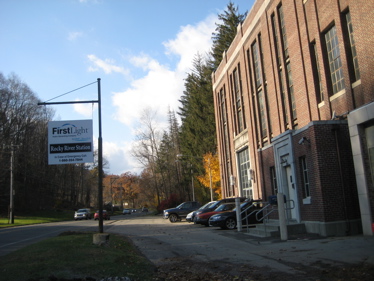 That sounds pretty cool, actually. The always excellent ASME pdf explains more, as does the ASCE document linked at the bottom. Here’s an a LOT more from the ASME story, if interested:

“… The completion of the Stevenson project there was more than 30,000 kilowatts of generating capacity installed on the Housatonic but only a small portion of this was firm capacity. Unlike the Niagara River, with its large drainage area and the regulatory effect of the Great Lakes, the Housatonic has a very ir- regular flow, varying considerably from season to season and year to year.

To firm up the existing and proposed hydro capacity on the river, some natural or artifical means for regulation of the river was needed. Rocky River, the first large-scale pumped-storage development in the United States, seemed to be the answer. As early as 1917, three plans had been considered, one for storage only, which could not be economically justified, and two with larger storage capacity and pumps located just below the Bulls Bridge powerhouse. In 1926, a plan for generation and pumping was adopted and work started. The development was unusual at the time because it was the first of its type in the United States. The first known pumped-storage development was in Zurich, Switzerland, in 1882, which was hydro-mechanical until 1891 and the first in the United States, also hydro-mechanical, was about 1885.

At that time, the Rocky River traveled north through the hills, passed through the village of Jerusalem, and ran into the Housatonic north of the center of New Milford. To flood the Rocky River basin, 5,420 acres had to be prepared. There were four ponds, Squantz, Barse, Crick and Neversink. The valley was occupied by farms, homes, schools, churches, and two cemeteries. It was necessary to abandon homes, relocate highways and cemeteries and clear timber and brush from 4,500 acres below to 440 contour line.

Construction of the main dam and power plant, along with four smaller dikes, began in 1926. Construction was under the direction of the United Gas Improvement Company of Philadelphia. A construction camp near the dam site housed 600 men, and four smaller camps were located throughout the basin. Known as UGI-ville, the community consisted of houses, shops, a mess hall, offices and other buildings. As many as 1,000 men worked on construction which was completed
in 1928.

The main dam is located on Rocky River about one mile above its confluence with the Housatonic River. An earth-filled dam with a concrete and timber core wall, it is 952 feet long and has a maximum height of 100 feet. To take care of some low points in the rim of the basin, five smaller dams or dikes were needed. Two are located near Danbury and three others near Lanesville. Near the main dam is a 3,190-foot canal leading from the reservoir to the intake. The canal dike is practically an extension of the main dam.

The station’s penstock, partially built of wood staves, runs from the canal dike down the hillside 1,007 feet to a surge tank and from there extends 670 feet to the powerhouse located on the west bank of the Housatonic River. In 1965, after 34 years of service, the original wooden penstock section was replaced.

Inside the station electricity is generated by a 38,430 horsepower vertical shaft Francis reaction type turbine connected directly to the generator. The station’s two original pumps were 8,100-horsepower each, 54 inches, vertical shaft, single inlet, single-stage centrifugal volute pumps with a rating of not less than 112,500 gallons per minute (250 cubic feet per second) delivered against a maximum head of 240 feet. When installed, they were the largest in the United States.

The generator was rated at 30,000 kilovolt-amperes, 24,000 kilowatts at 80 percent capacity factor, 3-phase, 60-cycle, 13,900 volts, 36 poles, 200 revolutions per minute. From the time it went into operation, it was recognized that with some loss of efficiency, the station’s two large pumps could be operated in reverse to act as generators. In 1951, the necessary modifications were made and the output capability of the plant was increased to 31,000 kilowatts.

The station’s upper reservoir, Lake Candlewood, was named for nearby Candlewood Mountain. The largest man-made lake in the state, it covers more than eight square miles, is about 11 miles long, has more than 60 miles of shoreline and holds more than 6 billion cubic feet of water.”