Just when a brewery opens in some sparsely populated far-flung Connecticut burg, it seems another one pops up in a smaller and farther-flung burg. I happen to love North Canaan and extreme northwestern Connecticut – and I really love that the folks behind Great Falls Brewing felt that the tiny town needed a largish brewery. 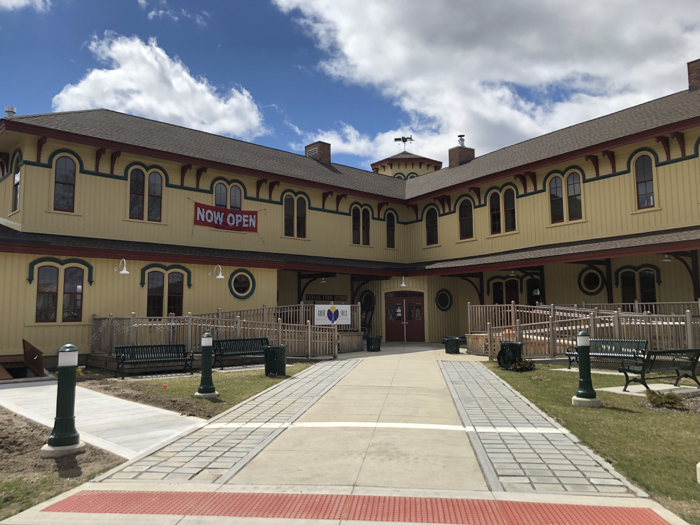 What the tiny town absolutely needed was someone to refurbish the Canaan Union Depot train station. It was built in 1872 at the junction of the Housatonic Railroad and the Connecticut Western Railroad and has been claimed to be the “oldest operating union station in the US” and “oldest surviving Victorian station somewhere” or something.

Arsonists burned down a good chunk of the building in 2001 which then languished for years until The Connecticut Railroad Historical Association bought it in 2003… who then let it languish for over a decade before securing the grants and such to get the rebuild and refurbish underway. 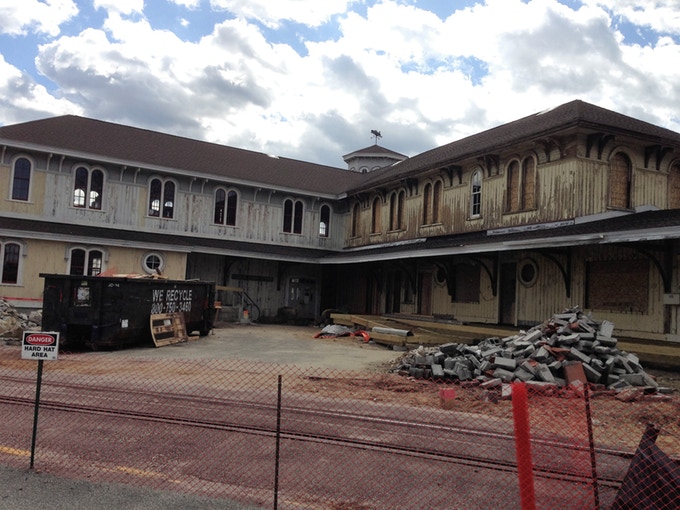 And now, in 2019, the now-inactive train station is beautiful and occupied by the The Connecticut Railroad Historical Association and Great Falls Brewing. Well done, all. 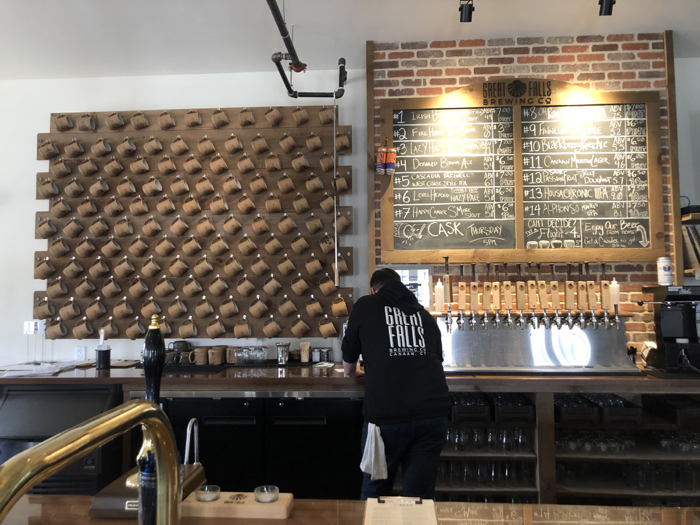 Furthermore, the brewery’s namesake “Great Falls” are, indeed, the “Falls” of “Falls Village” fame which are in Canaan and not North Canaan. Got all that? Good.

Great Falls had a bit of a rough start, when their Kickstarter campaign fell hopelessly short. Only 37 people pledged $4,211 of the $25,000 goal. This is the problem when trying to open brewery in places like North Canaan. Not enough people live or work near there to support an unknown quantity. 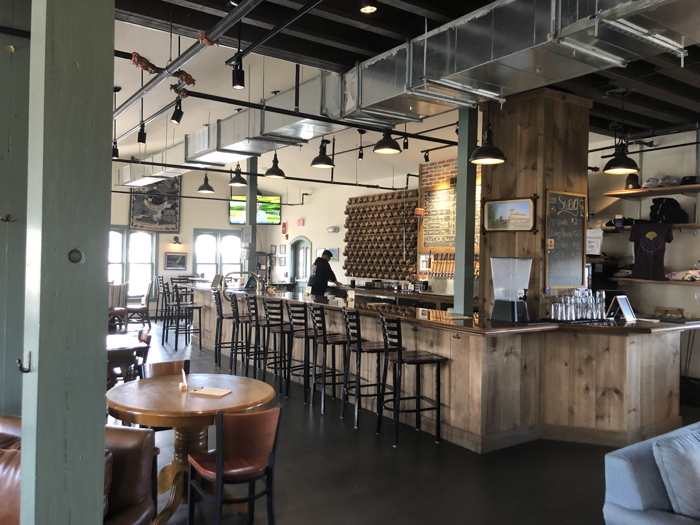 The face of the Kickstarter and I guess the current brewery was and is Chris Tripler. He seems like a good guy – and not just because he and I received the same degree around the same time from the same university. (EEB UConn Represent!)

Here’s some of his pre-brewery hype:

The Great Falls Brewing Company was founded by Chris Tripler, who has been brewing beer at home for over 20 years. A native nutmegger and UConn Husky, Chris has traveled the globe collecting experiences and skills, and is now ready to make use of his Ph.D. for the betterment of beer drinking-kind. That passion and dedication coupled with his love of the forests, mountains, rivers, and the people of northwest Connecticut have culminated into this project. Chris’ vision is more than just a simple brewery, but an embodiment of a life philosophy of being part of a community. While Chris enjoys fishing on the Housy, snowboarding the local hills, or taking his kids for a hike on the Appalachian trail, being beer maker and provider for others would be a life dream come true. 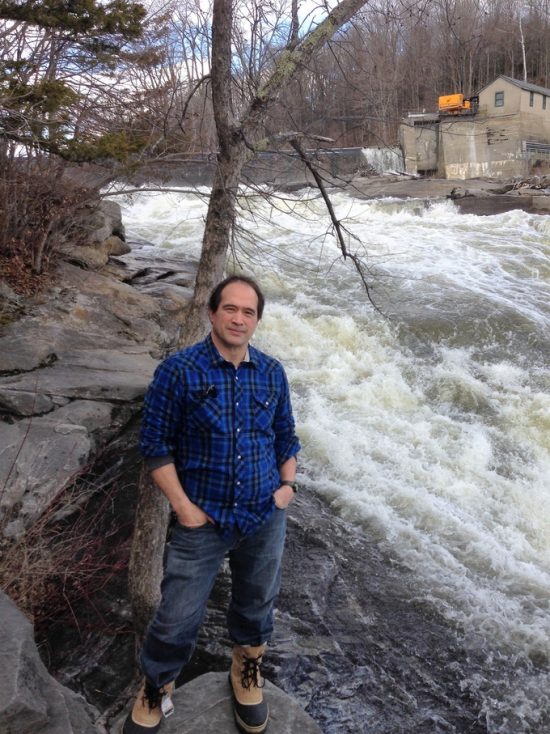 This is Chris Tripler at Great Falls. He’s actually standing in Salisbury here, with Canaan across the river.

I was going to make fun of Chris in the picture above; after cultivating this sort of hiking, snowboarding, woodsy fisherman persona, you’d think he’d have some well-worn boots and not brand new ones with the tags still on them.

But then I said to myself, “Steve, that would just be a jerky thing to say and I’m sure that’s not an actual price tag but rather something else entirely.” So I won’t mention it.

Tags aside, Chris and his team have done well. They brought Matt Bergfield on as head brewer; Matt’s worked at Harpoon and McMenamins Breweries out in Oregon previously. The setting of the Depot brewery is beautiful. There is ample outdoor seating including a massive sort of wraparound porch which takes in views of Mt. Bradford and Mt. Canaan to the southeast. 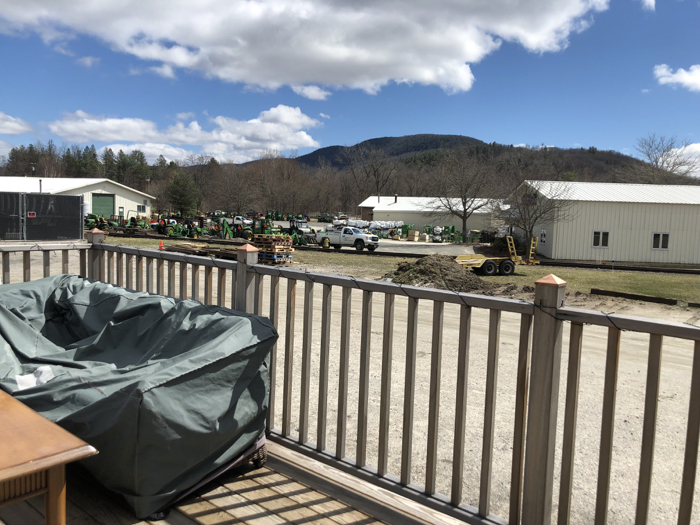 (And a John Deere dealership or something, but you can look past that.)

The Great Falls crew envisioned a kitchen here before they opened, but I don’t know what happened to that idea. Perhaps it’s still to come? Or perhaps they realized that it was a bit too much in the first couple of years and now rely on local delivery partnerships.

Sure is a heck of a lot easier that way. 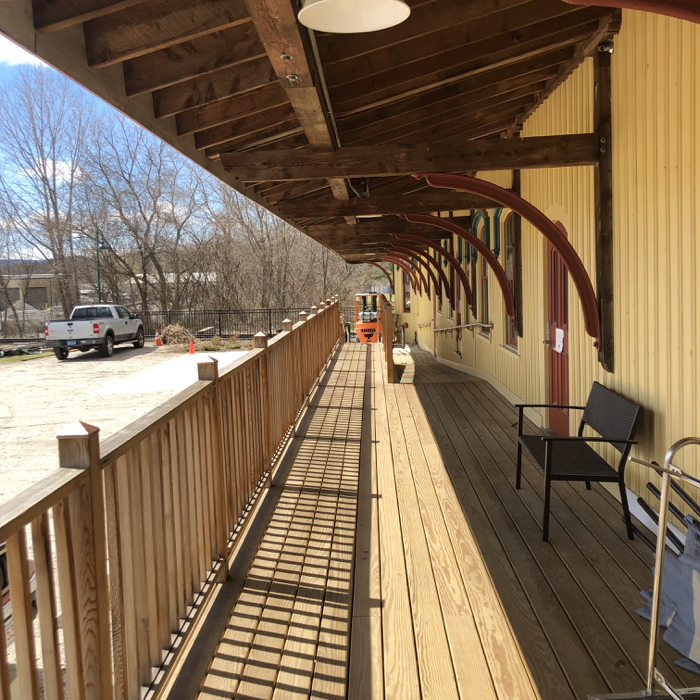 Great Falls is the kind of taproom one almost has to build in 2019 and beyond. Large, naturally-lit space with lots of comfortable chairs and stacks and stacks of games. Not just adult games, but plenty for the kids as well. TV’s, foosball, and darts rounded out the offerings during my visit.

And yes, I brought my younger son with me. And that brings me to the absolute craziest craziness about this place: It’s open 7 days a week! And at noon Wednesday through Sunday! We live in crazy Connecticut beer times, my friends. 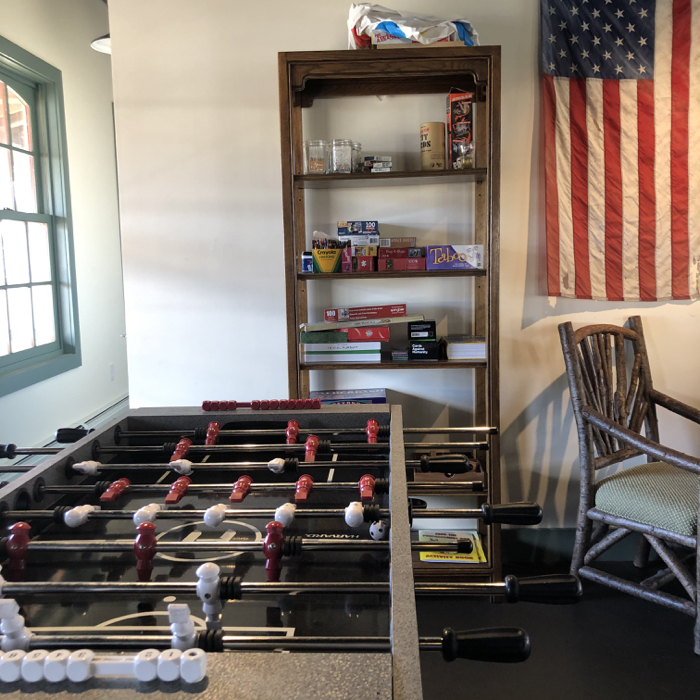 I arrived right at noon on a random Wednesday after Calvin and I did a bunch of Calvin-centric things. My arrival time was planned for noon because I figured we’d be alone. And we pretty much were.

This was good for Calvin as he wanted to play darts. Real darts. The kind that can “poke someone’s eye out.” We had a safety chat and I let him go for it. The guy working didn’t seem to mind either. So Calvin threw darts for a while. 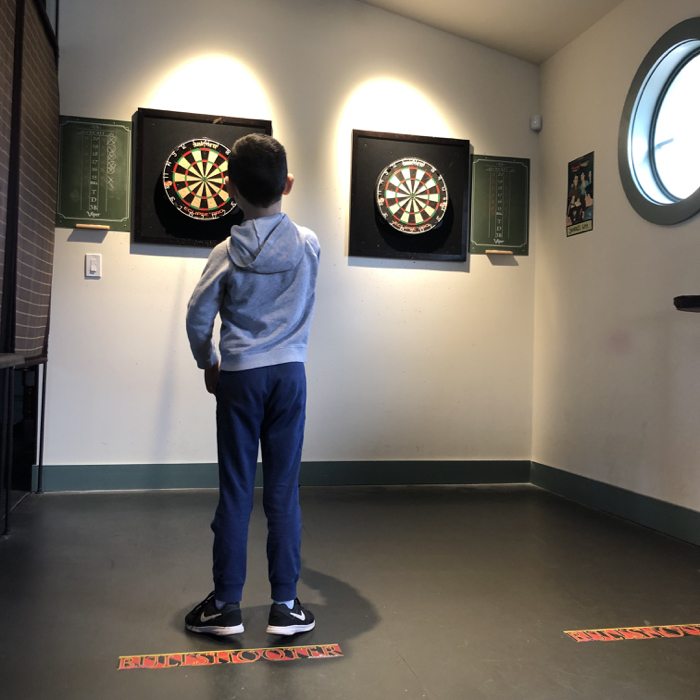 I had a little bit less fun trying to pick a flight of four beers. Despite there being 14 beers on tap, too many of them were styles that don’t really excite me. 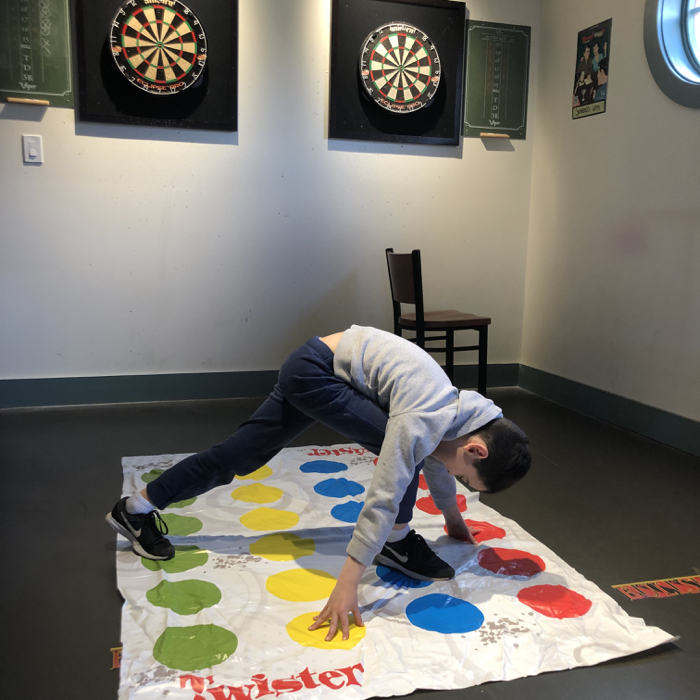 They brew their own non-alcoholic root beer which is cool, but I didn’t have any. They brew the standard stout, brown, and red ales which is also cool, and I’m pleased when I find breweries that still do that.

*Puts on old man hat, prepares to shake fist at clouds* But I have no need for a mango IPA or a “sour passionfruit jelly donut(?)” or stout made with s’mores or a “pineapple milkshake IPA.”

Except I apparently ordered a “pineapple milkshake IPA.” #$^#$%. 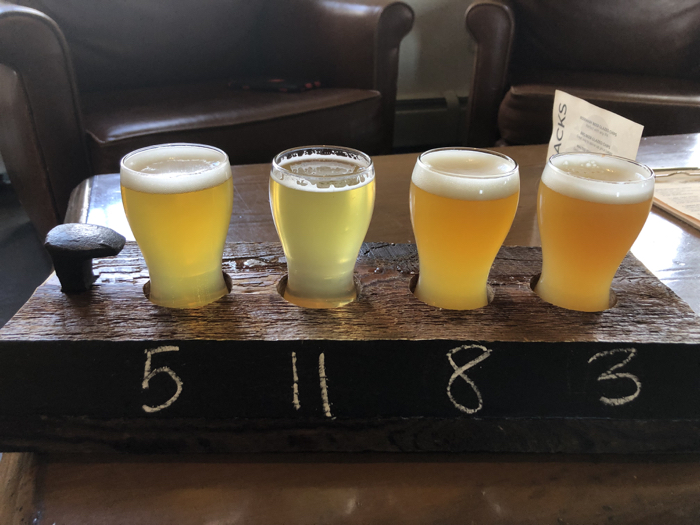 If you are unfamiliar, a “milkshake” IPA is this horrid trend wherein brewers dump lactose powder and perhaps some vanilla or other sweeteners into the beer. Why? I have no idea other than lots of people – people who don’t like beer, mind you – like them. My take on them: They are terrible.

So there I was, enjoying my “west coast IPA” and then my lager and then drank this pineapple sugar bomb thing. It made me mad. Ruined my palate for whatever I had after that; it wouldn’t matter anyway. I cannot wait for this garbage trend to end. 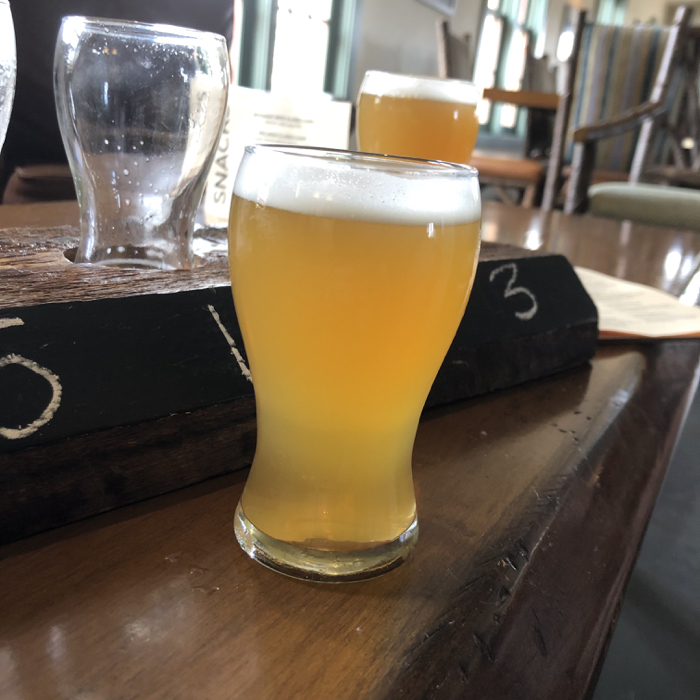 The beers that I could taste in the styles that I appreciate were good. Certainly good enough to keep the locals and localish crowds happy. Being open every day has probably turned Great Falls into the local bar. It’s a cool place to hangout and it makes people feel good about drinking “local.”

Again, great job with the whole building and vibe and great job with the taproom itself! The tap list is diversified and well-executed as far as I could tell. This is the kind of place that will likely survive the great brewery purge of 2022 (or whenever) because of how it is set up and, perhaps ironically, where it is located. 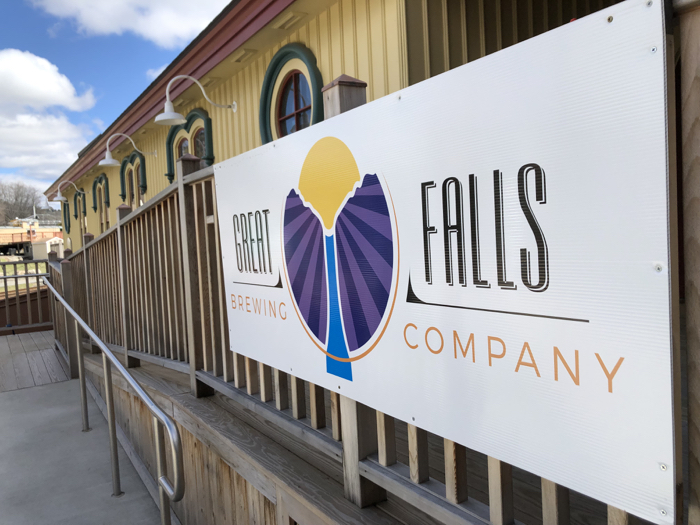