All Aboard from Canaan to Sodom!
The Oldest Operating Union Station in the US

2019 Update: This building is open and occupied by a brewery and a museum and other stuff! I’ve also read the claim that this is also the “oldest surviving Victorian train station in the US, but it burnt down so that’s ridiculous to me.

2014 Update: This page is now 100% more accurate thanks to a few commenters at the bottom. Like, for instance, my whole wondering about the station’s designation is put to rest by Geoff Brown’s comment and Karen Bartomioli’s confirmation of it. In light of that, most of what I wrote is moot. But you should read it anyway. 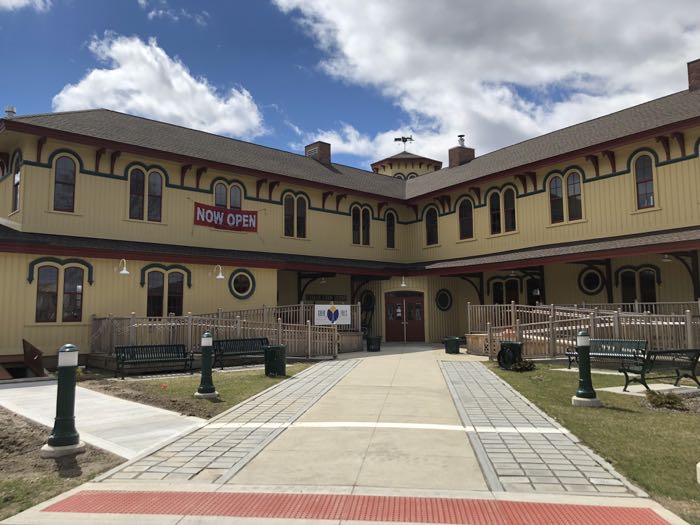 Regarding the title, there is a section of North Canaan called Sodom. Someday I’ll get a lurid picture of my wife Hoang underneath the sign. Until then, we’ll just have to be satisfied with this old train station.

And we really MUST be satisfied with it, because the much of the original thing burned to the ground. Yes, sadly, On October 13, 2001, the Union Station at North Canaan, Connecticut, was almost entirely partially (see comments below) destroyed by fire. Yet, arising like the Phoenix out of the ashes (older than Canaan, I believe), local civic groups and philanthropists have rebuilt the building very closely to its original design. 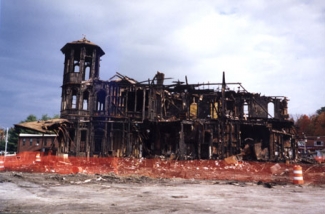 I stopped by on a beautiful Sunday afternoon and found the place empty and rather non-operational. It had been 8 years since the fire, but the strong intent is obviously to get the station up and going again (in some capacity) and it will retain its historic import as the “oldest operating union station in the US.”

Now, if you’re like me (and like it or not, you certainly are because you’re actually reading this), you’re first question is, “C’mon now… How in the world is the oldest operating train union station in the whole country tucked away in the northwest hills of Connecticut?” And if you don’t know, North Canaan is seriously “up there” and “out there” as far as most of the state is concerned. It might as well be Vermont.

Then there’s the oldest continuously operating amusement park, which is a true claim, but dubious at best due to several years of being open for only one stinkin’ day per year. And that brings us back to the Union Canaan train station. It stopped serving passenger rail in 1974. But, as you’ll read, they continued “operating” in other capacities until the fire – and plan to do so again. 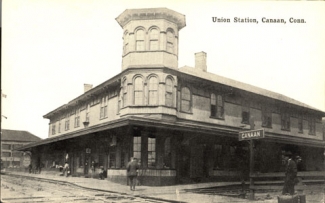 It just occurred to me that you are reading the oldest blog dedicated to museums and otherwise interesting sites around Connecticut in the US. Quick, someone Wiki that. 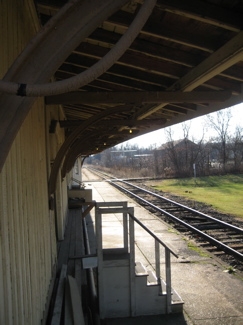 Anyway, the building was (and is again) beautiful, if a bit empty at present. The following is excerpted from an essay titled “History of the Canaan Union Station” by the organization tasked with its revival.

Better known as the oldest operating Union Station in the United States, the historic Victorian era Union Depot of Canaan, Ct. continues to be known as the heart of the town. This grand, wooden structure was born in the heyday of the development of railroads in New England, and miraculously has survived until Fire caused it to almost be completely destroyed on October 13, 2001.

In 1872 the Housatonic Railroad and Connecticut Western Railroad constructed the building at the junction in North Canaan. The Housatonic ran generally north to south, following its namesake river through the hills and valleys of western Connecticut and Massachusetts. The “Western” later became the Central New England, and eventually, both railroads fell under the dominance of the New York, New Haven and Hartford. The “Western” ran from Hartford, west to Poughkeepsie, NY and the important high level bridge across the Hudson River. This link created an all rail route north of New York City, and connected the coal fields of Pennsylvania to the factories of New England. Coal could flow northeast, manufactured goods from the many mills and forges of New England would move west and south.

The Canaan depot is a Victorian era gem. It was designed by the chief engineer of the railroad, but it’s the wooden carpentry that makes the building exceptional. G. H. Bundy a cabinet maker and builder of coffins, of Lakeville, CT is credited with this craftsmanship.

The building featured exterior walls of board and batten siding, and two long wings are at right angles to each other at the diamond. A distinctive three story tower (topped by a locomotive weathervane) allowed railroad telegraph operators a clear view down the right of way. Each wing was 90 feet in length and was occupied by the respective railroad companies noted above. Graceful rounded arch windows were used throughout, and neat wooden brackets supported the roof and track side canopies. Old curved back benches once occupied the platforms for patrons who were changing trains here.

On the second floor, is a large room that functioned as the station restaurant. It had a twenty foot long semicircular counter in place. In the days before railroad dining cars were commonplace, the Canaan depot lunch room satisfied many a hungry rail patron.

In 1971, passenger service was discontinued. Freight service would remain only until 1974, and the station was closed. It was saved from demolition by a former Amtrak executive who purchased it and converted it to a flourishing retail center, which until recently also includes a very popular railroad theme restaurant in the Central New England wing of the building. In 1980, the state “rail banked” the Housatonic track, and since 1983 a short line by the same name operates on the upgraded track age, which is seeing increasing car loadings. Occasional rail fan excursions still operate on the historic and scenic right of way. Many other stations still exist along the old Housatonic track, and countryside of western Massachusetts and Connecticut.

The Connecticut Historical Railroad Association, INC. recently purchased the station after a huge fire nearly destroyed this historical landmark. This not for profit charitable organization is in the works of reconstructing the station back to its original state. The estimated project cost is close to 2.2 million dollars in work and labor. Donations are needed. Please help on reconstructing this historical site that was so much a part of people’s lives and the heart of this small town. 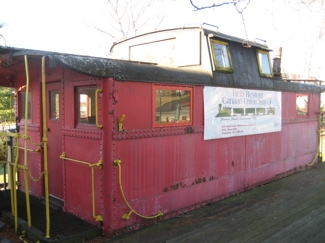 it’s all still a bit dubious to me, and I’m sure over the years, people will discuss this issue in the comments. At least I think they will… In this, the oldest continuously operated comments section dedicated to the veracity of the Canaan Train Station!