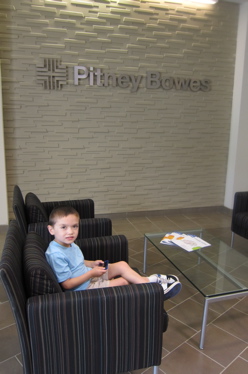 Social media works! Nearing the end of my ASME Landmarks list, I was having trouble figuring out how to contact Pitney-Bowes to see about gazing upon this beauty. Their company website, while rather nice, never gave me the media contacts that allowed for such silly questions such as my own.

I turned to Twitter – searched for the company, found a social media liason, tweeted my question to her and waited. About a day later, I received a response that she’d “look into it.”

And she actually did! I got an email address, wrote, and received a welcoming response. The Model M Postage Meter is proudly displayed in the new PB Tech Center in an industrial park in Danbury. And I was welcome to check it out anytime during business hours! Yes!

Months went by until I had a day off from work where I could make the drive out west, which I did with Damian. And voila! The world’s first commercial postage meter!

Here’s more from the fine folks at ASME:

The world’s first commercial postage meter–the Model M–was designed and developed in Stamford between 1901 and 1920 by inventor Arthur Pitney and entrepreneur Walter H. Bowes, with the assistance of Walter H. Wheeler, Jr. The Model M formed the cornerstone of the Pitney Bowes metered mail concept, which was officially recognized by the U.S. Postal Service and was introduced on November 16, 1920. 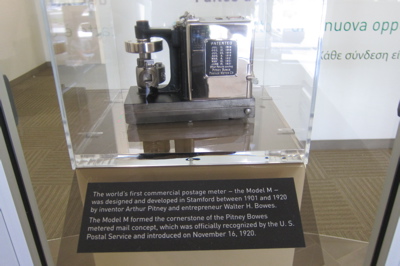 The postage meter, which eliminates the need for the adhesive stamp, fundamentally affected the expeditious handling of mail and rapidly came into use around the world. The meter allows the simultaneous postage and cancellation marking of a piece of mail. The official imprint authorized on September 1, 1920, was an oval indicia showing the mailer’s license number, the register number of the meter, and the denomination of postage (two cents).

Now, I only have one more landmark to find and it’s an easy one – in the Mark Twain House Museum in Hartford. So all the hard work of tracking these things down in private companies is done. Awesome.

The always excellent ASME pdf Brochure about it