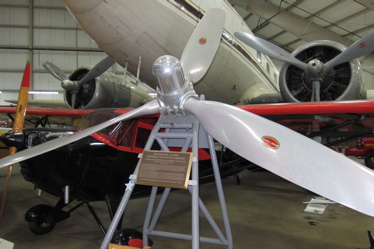 I visited the museum with Damian (probably not my smartest move, but I didn’t know the scope of this place) so my whip around the complex was way shorter than I’d have liked it to be. I’m sure I’ll be returning someday to give the place the attention it deserves. Regardless, as I tried to glean as much information as I could from the displays at the museum, I spotted this landmark and smiled ear to ear.

I had completely forgotten about it being here. And really, the “landmark” is a mere little propeller in a roomful of propellers. So hat’s off the NEAM folks for placing the plaque in full view – of even the most harried of dads. Although this is one of the few easily accessible ASME plaques (with admission to the museum), it still required the help of another person; in this case, one Susan Orred who kept Damian busy on some computers for a good long while as I ran around the joint like a mad man. 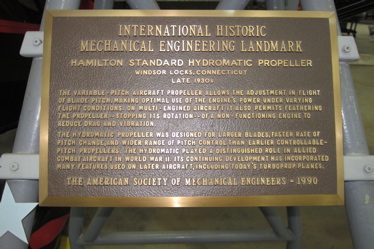 Okay, so what is this thing and why is it special? For starters, it’s an early example of propeller innovation, including variable-pitch control and feathering capability. That’s great, but I want to know more. So I ask you, dear American Society of Mechanical Engineers:

Rapid development of aircraft design in the 1930s required many related innovations, including propeller design. The hydromatic propeller by Hamilton Standard marked a significant advance over the counterweight-type, controllable pitch propeller. The first test flight of the prototype took place in 1938: the public demonstration was made by a United Air Lines DC-3 over New York City on April 6, 1938. It played a distinguished role in allied combat aircraft in World War II. Its continuing development has incorporated many features used on later aircraft, including today’s turboprop planes.

The hydromatic propeller was designed for larger blades, faster rate of pitch change, and wider range of pitch control than earlier controllable-pitch propellers. Improvements from a two-position controllable to the constant- speed type propeller were not equal to the demand of high-output engines or rapid airplane maneuvers. The variable-pitch aircraft propeller allowed the adjustment in flight of blade pitch, making optimal use of the engine’s power under varying flight conditions. On multi-engined aircraft it also permits feathering the propeller–stopping its rotation–of a nonfunctioning engine to reduce drag and vibration.

The application of oil pressure to both sides of the actuating piston provided increased capacity and the capability of feathering or unfeathering by a single control knob. The precise pitch control permitted post-war refinements such as synchronization and synchrophasing of multiple engine to eliminate “beats.” Reverse pitch permitted a shortened landing roll on large commercial transports.

The artifact is Model 23E50 Hamilton Standard quick-feathering hydromatic propeller, typical of many thousands produced from 1938 to 1945. It was set aside as an example from an early production run and donated by Hamilton Standard to the museum. 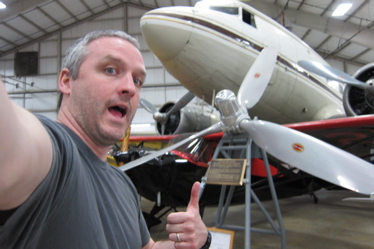 Unlike you, I just read all of that. And I can’t really understand why this thing gets the designation while the 100 other aviation innovations at the museum didn’t. But what do I know about this stuff?

Now that’s a question I can answer by myself: Nothing.

New England Air Museum
My visit to the museum