To some, Bad Dream has a few things going against it: I’ve heard the name is a turn-off, it’s small, and its location – whether it’s an “Oh my gawd, New Milford is impossible to get to” thing or an, “Oh my gawd, it’s next to a nail salon and tanning place in a shopping center anchored by a TJ Maxx and Staples” thing. 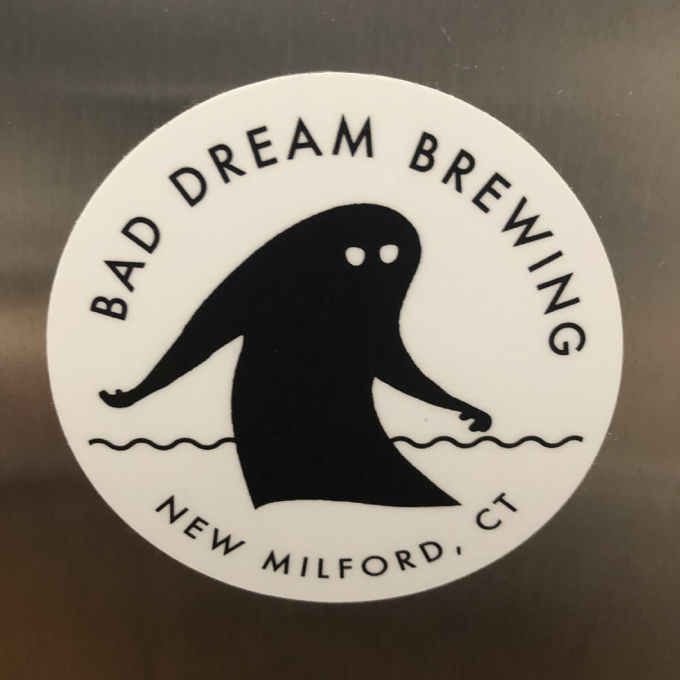 I’ve learned that brewery names don’t mean much and people get over the names of places and things almost immediately. (Although, hmmm, Parable Brewing did rhyme with Terrible Brewing and they were one of the shortest-lived Connecticut breweries of the last half-century…)

As for “too small” there are dozens of tiny commercial breweries now and the taproom itself is comfortable and spacious enough. And as for the lament about New Milford – I always hate that one. After all, plenty of people live in New Milford! It’s not far away to those people, y’know.

But yeah, the weirdness of a storefront in a strip mall is a bit of a hurdle for the Bad Dream team, but they seem to have figured that out pretty well. Once you step inside the brewery, you are as transported away from TJ Maxx as much as possible. In fact, I’ll begin this review with the conclusion for those of you who don’t like reading:

I rather love Bad Dream Brewing. 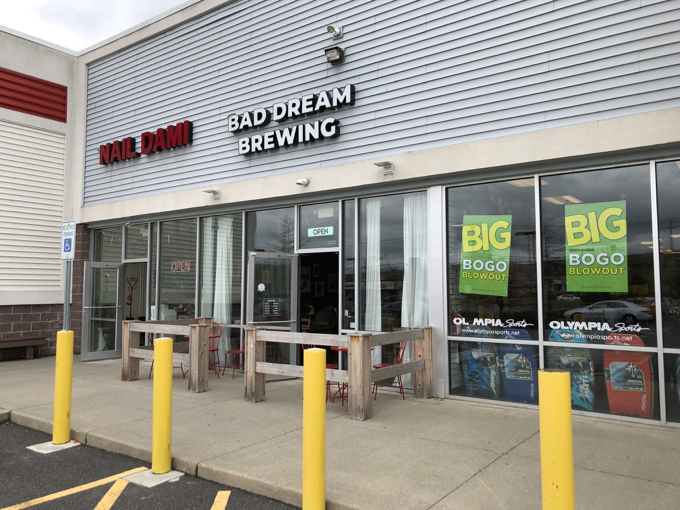 There are a bunch of breweries in this part of the state now in early 2019 – seven in Newtown, Redding, Ridgefield, Bethel, Danbury, and New Milford. Bad Dream is one of the two that I look forward most to revisiting. (Broken Symmetry would be the other one.)

Here’s the deal: Bad Dream brews on a three-barrel system, they don’t distribute, they don’t have food, and it’s not like they ever get props on the Idiot Festival of Connecticut Beer social media. 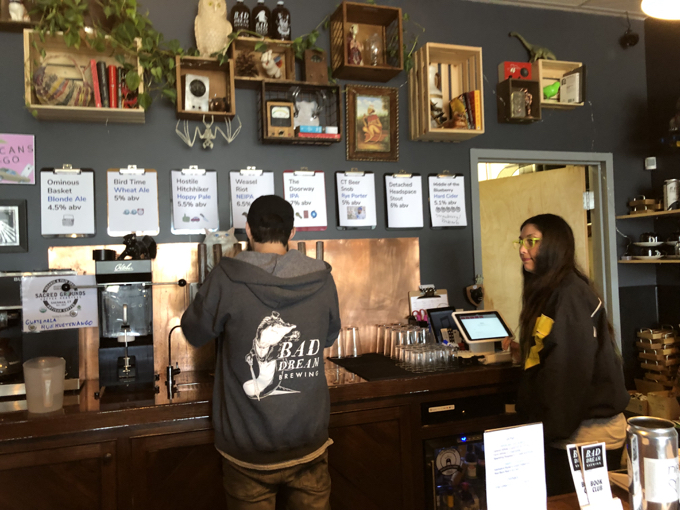 But they get props here. And as we know, this is where it really matters.

(We don’t really know that by the way.) I got a flight of four beers here and took a seat. There is outdoor seating here, but I can’t pretend that is an attractive option. Especially when the interior is the type of brewery/bar that I’ve been clamoring for for a decade. 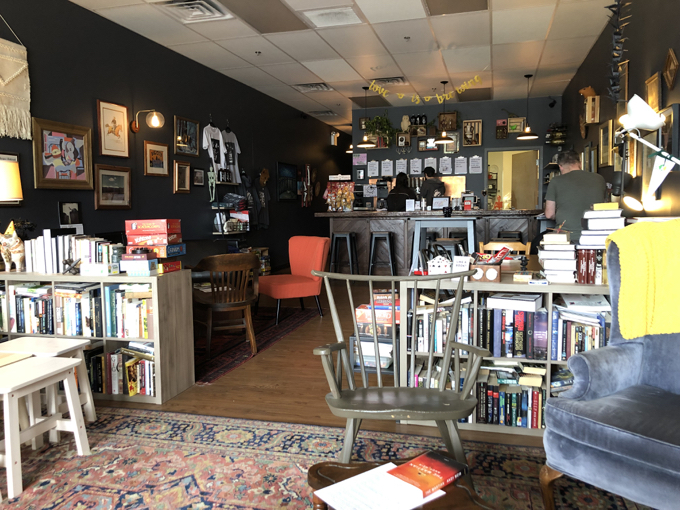 There are couches and big smooshy chairs. The artwork and lighting (and furniture) is random and mismatched, but it works here. And despite all that’s going on here, it was as clean and as organized as it could possibly be. I was hugely impressed. I would spend entire afternoons or evenings here if it wasn’t 90-minutes from my house. And I didn’t have children. Or responsibilities. Sigh.

Quickly, the name and the books… where did all of this come from? The four owners, or at least one or two of them, used to coordinate a popular book club and started serving their home-brewed beer to guests. That eventually led to the idea of opening a brewery and, after more than two years of planning, the idea has become a reality. 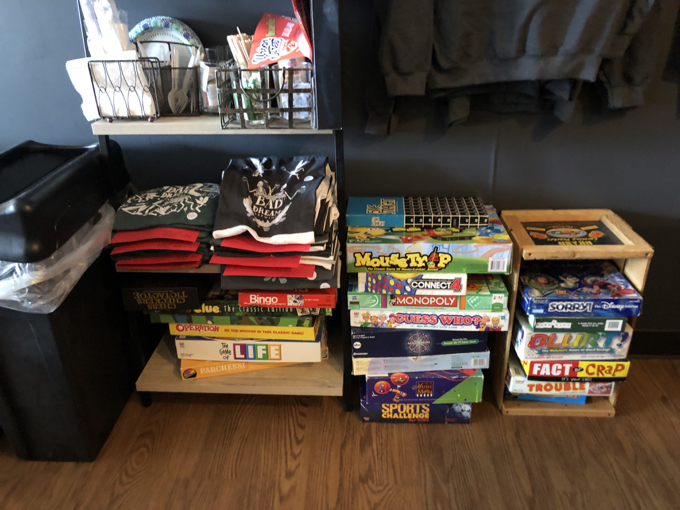 The owners are all local, the brewery is self-funded, and while I don’t know them at all, I’m pretty sure they are humble nerds that I could hang out with if they can handle hanging out with an old person who isn’t allowed to like anything hipster. Their backgrounds include chemistry, legal, electro-mechanics and computer programming. Oh, and they opened a brewery with tons of books for patrons to hang out and read or take home or add to or whatever. Rad.

They also run a book club at the brewery, which is also rad. They’re mostly into horror – hence “Bad Dream” – which isn’t really my thing, but they seem to be open to non-corny-horror type stuff. There are entire shelves of Stephen King and H.P. Lovecraft here, to give you a sense. But I also found this book, which is an excellent and highly recommended book: 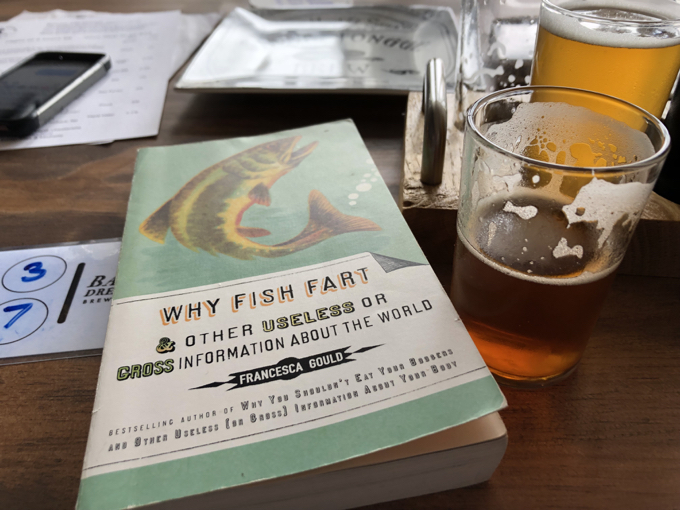 But what about the real reason I was here?… the beer. Fortunately, it’s not in the horror genre like their preferred books. In fact, it was all pretty good. Good enough for me to drive to New Milford just to drink their beer? Nah, that’s ridiculous. But paired with the vibe, certainly good enough for me to stop in whenever I’m out this way, sure.

Speaking of the vibe, my beers here were paired with Radiohead, The White Stripes, and other bands that are more obscure that I won’t mention. I was totally into it. Bird Time, an American wheat ale, was deemed “fine” in my notes which for the style at a newish brewery, is fairly high praise.

Up next was the Hostile Hitchhiker IPA. This, my friends, is a lowish ABV old school real IPA. It was very good and upon drinking it, I thought to myself, “I’m so happy these young brewery-owning bucks know what an IPA is supposed to taste like.” I don’t care if they call it a pale ale, this had the hint of citrus with the bitter bite. Nice. 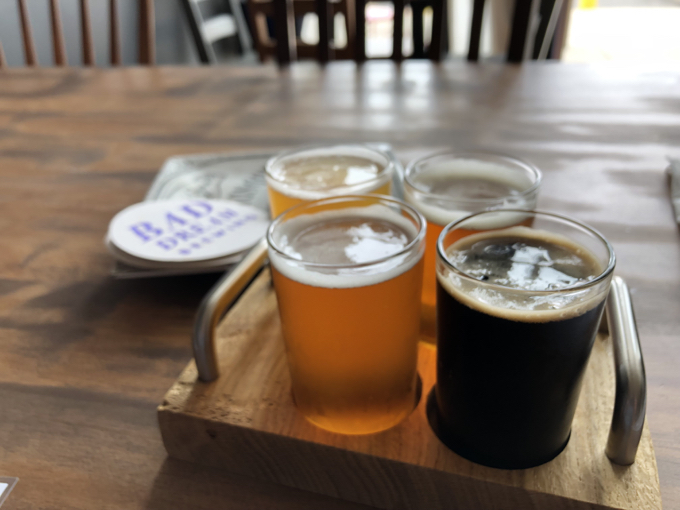 Up next was another IPA; one that they call an IPA. The Doorway is a dry, bitter American IPA brewed with Eukanot, Comet, and Simcoe hops. Again, stellar, classic, and well made. The last one I had was their stout, another excellent embodiment of what beers used to be like. Roasty, touch of sweetness, this one’s called Detached Headspace and it was a perfect stouty stout. Not too thick, no “pastry” in it, not too thin. I loved it. It was the best beer of the four. 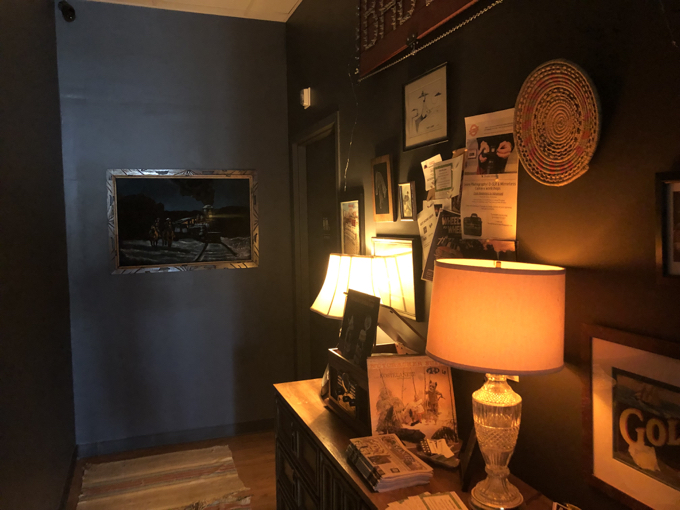 I notice that Bad Dream also has an English Porter named after Will Siss, author of Connecticut Beer, and friends of CTMQ. He helped brew the beer – as a high school teacher, I can see why he’d dig this particular brewery – and a portion of the proceeds goes to a local literacy program. Fantastic all around.

Look, I’m drawn to this particular place for its particulars. I even found their lighting to be cool, and I have a feeling that when it’s dark outside, Bad Dream is a better experience. I’ve been to a few dark, book-filled pubs in London with good stout on tap. Bad Dream made me think of them fondly. 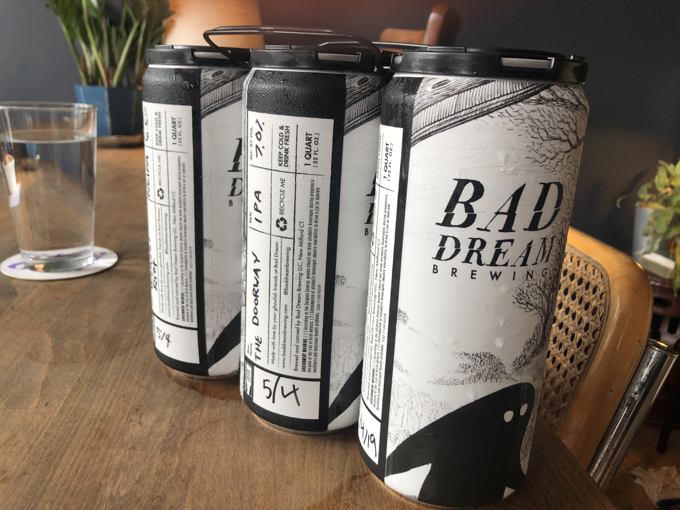