This page was written before I embarked on the odyssey to eat the entire Roadfood list. It was written because Louis’ Lunch is an important Connecticut icon in and of itself. It was also written in 2007 when I was much younger and less-appreciative of things.

In the interim, Louis’ Lunch has been officially recognized by the Library of Congress (via the very important work of Rep. Rosa L. DeLauro) as the Birthplace of the Hamburger.

I’ll probably revisit someday to get better pictures and a more mature take on the food, though the burgers still can’t be all that good… and the long lines haven’t abated. 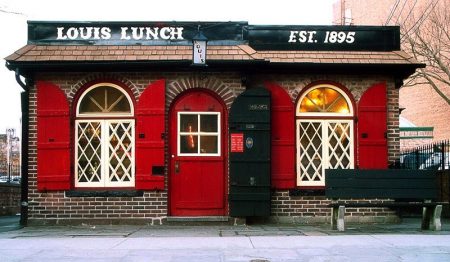 Life is about choices. Sometimes those choices are sacrifices. CTMQ is long, sometimes difficult pursuit. What does all this have to do with grabbing lunch in New Haven? A lot, actually; I generally do not eat red meat and have not for the past seven years or so. I’m not a “vegetarian” in the truest sense and I do not preach any message.

My daytrip to New Haven was planned two months in advance and upon realizing I’d be in the vicinity of Louis’ Lunch, I began internally debating the merits of the place and whether I should compromise myself for the good of CTMQ. Is it historic? Yes. Is it photogenic? Yes(?) Will I get a good story out of it, even if the bulk of it is my whining about how I don’t eat hamburger? Obviously. And so, there I was, waiting to eat my first hamburger in years at the home of the America’s first burger. Exciting! 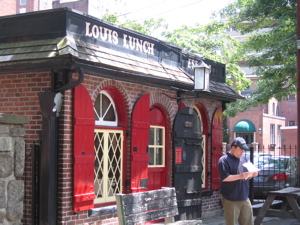 My friend Rob and I arrived at the tiny establishment (Est. 1895) a few minutes before the noon opening. We were about 8th in line but were still able to grab a “booth” inside. Holy Cow this place is teensy. Like a lot of kitschy food joints, Louis’ takes pride in making customers adhere to corny “rules.” It pays to know how to order (Saturday lunch gives you one option: a burger.) You may only add cheese and/or tomato, you can get some chips, and you have your choice of a wide variety of sodas. All burgers are cooked medium rare, unless you specify otherwise. 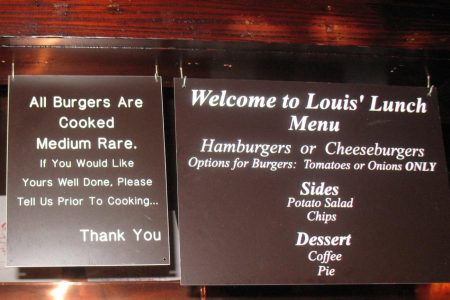 I specified otherwise – and got grief. How DARE I order mine medium well (bloody meat isn’t high on my list these days) and the heavy breathing large, gruff man behind the counter made sure the whole place knew that I was the jerk with the special order. Great. I’d like to now point out that Louis’ Lunch also likes to purposely misspell words on its menus – which I hate. Stuff like, Koka Kola and Blak Cheery soder. Very annoying. I ordered for the two of us and got a good look at the operation behind the counter. 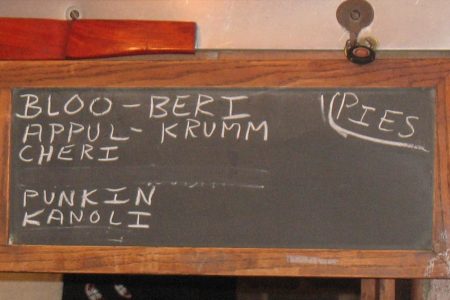 Wow. This place totally fits in with the CTMQ ethic. The cook was an elderly woman nicknamed “Ma” who tended the ground beef. She counted orders given to her, molded the patties flat, and stuck them in ancient cast iron broilers sideways. They looked like miniature wood stoves. Once broiled, she stuck them between two toasted pieces of plain white bread (having been toasted in an ancient toaster), added the cheese, tomato, and onion, slapped them on tiny white paper plates, and that was that. We waited for our order and took in the scene: There was an ever-present line and take-out orders rolled in constantly. There were odd signs around the joint such as the one stating they’d be closed for the entire month of August to do their annual “spoon inventory.” (When you charge five bucks for 40 cents worth of raw material, I suppose you can get away with that.) 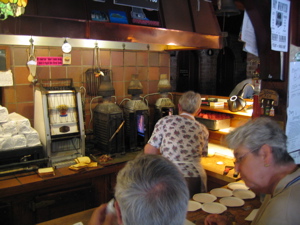 2020 Update: They are charging $6.75 per sandwich now and the cheese is no longer real cheese.

“Steve, you’re ready!” shouted the guy. “Except for your medium well burger! That will take longer!” he shouted, just to make the point that I was a jerk somehow. Whatever.. 3 minutes later he called my name again, pointed out yet again how it took longer and I took my seat. Oddly, my “medium well” meat was certainly rare, as blood oozed into the white bread. Rob’s default burgers, however, were cooked through. Thankfully, Rob has no such hangups and had no problem trading with me, which he did.

Bite. Chew. Swallow. Don’t dare ask for/look for ketchup; for some reason, that’s one of Louis’ Lunch’s “things.” It’s all so silly to me. 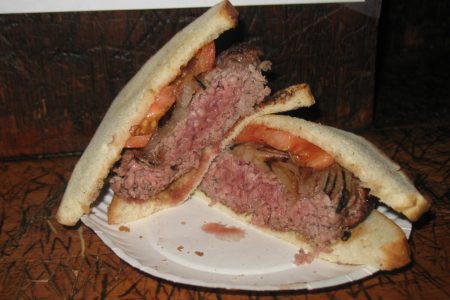 Eh, I don’t get it. Rob, who knows better than I do about burgers, agreed. The no condiments thing is just dumb kitsch at this point as is pretty much everything here. If you’re doing food history tourism, you must go here. If you want a decent burger for lunch, there are probably two dozen better options within a few blocks. Yes, I know this is heresy in Connecticut. Bring it.

The story of the first burger goes like this: One day in the year 1900 a man dashed into a small New Haven luncheonette and asked for a quick meal that he could eat on the run. Louis Lassen, the establishment’s owner, hurriedly sandwiched a broiled beef patty between two slices of bread and sent the customer on his way, so the story goes, with America’s first hamburger. Most interestingly, to me, is that the Lassen family still owns the tiny eatery and still adheres to the original ethics of it. Over the years, pretenders to the “first hamburger” crown have nipped at Louis’ Lunch’s heels but CT Representative Rosa L. DeLauro has slapped them all down in Congress. It’s THAT important.

We finished our sandwiches, wondered why there was a line out the door, and continued our day of museums. I’m glad I went there and I’m glad to have this visit memorialized here on CTMQ, but really; more-or-less plain ground beef on white bread? Why? 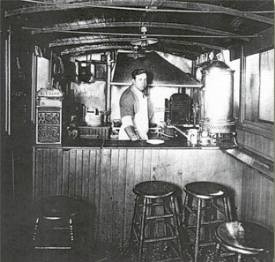