CTMQ > Everything Else > Book Review: The Ice Storm

The Ice Storm
By Rick Moody

When I started getting a little bit more serious about reading and writing about books about Connecticut, I began collecting a list of titles in which I was interested. It quickly became apparent to me that there was a proliferation of books that take place in New Canaan, Darien, and Greenwich that don’t paint such a great picture of these incredibly wealthy, incredibly WASPy towns.

Look, if we could afford to live in a mid-century modern beaut, like the “key party” house in the movie adaptation of this book, we would. The public schools in these towns are better than costly private schools in 47 other states. But man, the literary and cinematic world paint rather bleak pictures of these towns.

Granted, there is deep-rooted racism, anti-Semitism, and classism down there – and plenty of absentee parentism leading to drugsism and bored kids doing dumb stuffism. It’s that last bit that takes us to Moody’s 1973 New Canaan and a day in the lives over Thanksgiving weekend of the Hood and Carver families. 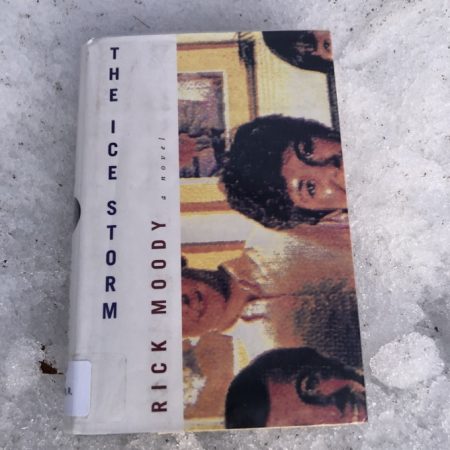 I generally like books that explore the minutia of a single day. But Moody’s stormy Ice Storm day is bleak, man. The book is much darker than the movie – which was, in the end, a dark movie. The storm of the book’s title is bearing down on southern Connecticut which is apparently a siren call for Wendy Hood, a pubescent 14-year-old (Christina Ricci in the movie), to scamper through the icy rain to sexually experiment with Mikey Carver (Elijah Wood in the movie) in his basement.

Moody is adept at writing about young teen body parts and young teen explorations. So good that it’s a bit uncomfortable at times. Fortunately, the two never perform coitus and they were interruptedus by Wendy’s father – who was interrupted from his own affair with Mikey’s mom upstairs. These people are a mess.

Moody ladles loads of 1973 pop culture references; enough so if you are too old or too young to remember the year of Watergate, gas crises, and shag carpeting, he forces you to come to grips with it for the purposes of his story. What starts as a dark comedy deepens into suburban tragedy. All of the characters are in various states of despair, dissolution, or disappointment, but all are believable. For all the good in New Canaan, a lot of bad is hidden beneath the surface. If you need help understanding the symbolism of “the ice storm” in The Ice Storm, ice coated trees are beautiful superficially, but can also cause tons of damage and destruction. Well done, Moody, well done.

Wendy escapes her parents’ depression and depravity by acting out sexually. Her brother Paul (Tobey Maguire in the movie) escapes through comic books and drugs and unrequited crushes (specifically on his friend Libbetts which I only mention because she was played by Katie Holmes and I shared Paul’s crush on her back in the 1990’s) Anyway, this is a dark, moody book. It’s like the author said, “I’ve been stuck with this name, so I’m going to go all in with it.

Mother Hood confronts Father Hood (get it? Moody is pretty transparent with some of his cleverness here) on his affair with Mrs. Carver. They argue and in perhaps my favorite passage, Wendy cranks the volume on “A Charlie Brown’s Christmas” without any specific reference to the way parents yammer in Charlie Brown cartoons. The Hoods, despite an affair coming to light, are so trapped in their pathos and suburban expectations that they attend the fateful party at the Carvers. This is the “key party” that the movie made famous.

I really had no idea these were real things. I’m still somewhat skeptical that they were. A bunch of dopey couples get together and the husbands put their car keys in a bowl and the wives randomly choose a set and trundle off to commit adultery with the chosen key’s owner. Like, who does that? Married parents? Who can get excited to cheat on their spouse while their spouse is cheating on them down the hall? With some house frau from down the street? Key parties are the dumbest thing I’ve ever heard of.

I was born in 1972 to two decidedly non-key-party goers. What was wrong with you younger Boomers? I read the following paragraph on Amazon or something. The reviewer is a bit over the top here, but you get the gist:

An exuberant and dark novel that makes you both laugh and hold your stomach at the detailed and nauseating portrayals of the shame of youth and family. No one is safe in this book, and no one is good. Everything is tinged with either a rot that is unredeemable or a rot that is still in its seedling state. The children will be as rotten as the parents, and the parents seem beyond hope. The culture of the town is hopeless and the only thing that makes it at all uplifting is the sense that this era is passed, and that these experiences are not your own. Something about the father with the mouth full of canker sores says it all – his rot is at once personal and biological, a matter of destiny.

I love when we amateur reviewers try to get all Rick Moody in our little blurbs. Look, the characters in The Ice Storm are damaged, broken humans. All of them. Moody is skilled and never goes over the edge into absurdity though; all their pain and poor decisioning is within the realm of reality. 1973 New Canaan reality.

There is tragedy at the end of the story, and those closely involved with the deceased aren’t written to express their grief. Such is the self-absorption. Or stunted emotions. Or the drugs.

The Ice Storm is as much of an indictment of New Canaan area as The Gentleman’s Agreement or The Stepford Wives or the Alex Kelly Trial is. The super wealthy have dark secrets, man, but they have the means to hide them.

Until they can’t. Rick Moody exposes their truth deftly and wonderfully in The Ice Storm.

Regarding the movie, which I like very much, it was filmed in New Canaan and according to this site, the locals were displeased. This person has done an amazing/creepy job of finding film location is the town though, and for that, I thank him/her.