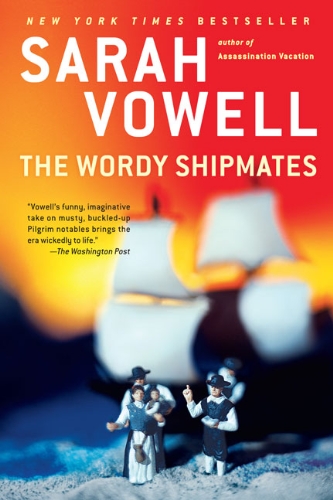 I love Sarah Vowell and while her “Assassination Vacation” is a little bit more entertaining, it has nothing to do with Connecticut. The Wordy Shipmates, however, has much for CTMQ fans to devour. Vowell dissects and describes the second wave of Puritans who settled New England back in the 1600’s. The original Plymouth Colony folks were boring and insular. However, the Massachusetts Bay Colony crew were far more interesting.

But the book really appeals to me when the likes of Thomas Hooker and Roger Williams crop up. Hooker, who founded Hartford, is a kooky, zealous, hardcore Puritan with hang-ups about everything non-Puritan. Williams, who founded Providence was way ahead of his time – fighting for the separation of church and state 100 years before the Constitution framers did their thing. Williams was also tolerant of non-Puritans (yes, even Jews and Muslims and Atheists and Natives) which is sort of what got him banished from Salem, MA in the first place.

Coolest fact: Roger Williams’ Alogonquin-English phrase book was used all the way through the 1930’s by explorers in Labrador.

There is a good chunk about our Pequot War, which was a horrible mini-genocide committed by the English on one of Connecticut’s native tribes. Uncas is in there, as well as Indian Leap in Norwich. Captain John Mason, one of the English responsible for burning hundreds of Pequots alive, get a mention as does the statue honoring him that has had some serious controversy in our state. Read this book. And then read the next one.