So you’re saying to yourself, “A warehouse? An old warehouse at that? Um… why?” Good questions… Ones which I’m happy to answer for you. After having been to both the Wethersfield Museum and the Hurlbut-Dunham House a mile or so down Main Street, we completed the triple-museum day here at the historic Cove Warehouse. 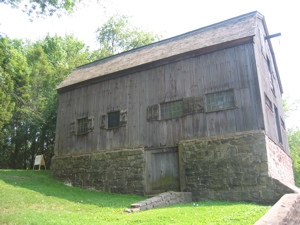 The trip down Main Street in Old Wethersfield is very pretty, as this is the town with the state’s largest historical district. The end of the road bumps up against the Connecticut River and a pretty nice little townie park with a somewhat dubious beach. (Swimming in the polluted river would result in skin growths heretofore unknown to mankind.) It is here, among the picnickers and fishermen that stands the mighty old warehouse. 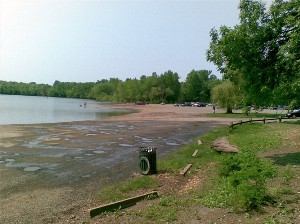 EdHill climbed the little hill from the parking lot and approached an older gentleman in a dining room chair. Any dumb thoughts of sadness for the man and the way he spends his beautiful weekend afternoons were quickly dashed as soon as he spoke. He was full of vim and vigor (and jokes)! Spry for his age and eager to tell the tales of Wethersfield’s colonial maritime past; this guy once again reminded me of why I’m doing this project. So who was this docent?

None other than Mr. Richard B. Lasher, Honorary mayor of Griswoldville, of course. Mr. Lasher (featured in the book Connecticut Curiosities by Susan Campbell and Bill Heald) is a trip. Griswoldville is one of those old CT towns that no longer really exists, so being mayor of it really means nothing. (It was absorbed by Wethersfield proper years ago.) But Mr. Lasher relishes his role, running on the Mugwump ticket and issuing proclamations such as, “I straddle the fence on every issue; thusly, my mug is on one side of the fence, and my wump is on the other side, and I’m for my friends!” 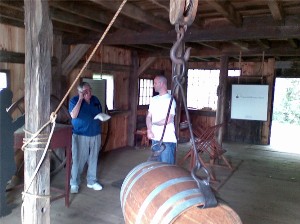 Awesome. But aside from his general goofiness, Mr. Lasher knows his town history – all the way back to 1635. Merchants exported lumber, grain, onions, salted beef, fish and pork in exchange for salt, sugar, molasses and rum from the Caribbean. This warehouse, built around 1690, stored goods before their transport downriver. I can’t quite remember many details (nor read my jumbled notes), but there was mention of a man named John Oldham who got tired of the Puritanical iron rule up at Plymouth, MA and set up shop down in Wethersfield. Google is my friend:

John Oldham was a colonist in New England, born in England about 1600. A trader, he emigrated to Plymouth in 1623 but was banished (1624) because of his opposition to the strict government. Later he was involved in establishing the unsuccessful settlement on Cape Ann (1626), several of the settlements in the Massachusetts Bay colony, and Wethersfield, Conn. His murder by the Pequot on Block Island in 1636 was one of the events leading to the Pequot War. 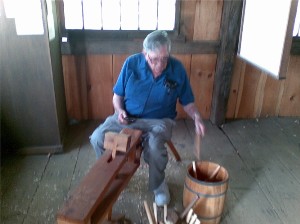 There are few communities in America as old as Wethersfield, Connecticut. Like many of Americas best-preserved Colonial towns, it has been the beneficiary of its own misfortune. One of the busiest shipping ports between New York and Newport, Wethersfield fell victim to shifting economic forces in the 19th century. Within a few decades, the town went from a regional commerce hub to an all but forgotten farming community. Despite the proximity of the thriving state capitol, Hartford, only four miles distant, the factories, mills, warehouses, and mass housing of America’s Industrial Age bypassed Wethersfield.

By the time America won her independence, Wethersfield had been thriving for almost 150 years. Its origins can be traced back to 1633 when trader John Oldham returned to his home in Watertown, Massachusetts, telling tales of a broad and fertile river valley some 100 miles distant – a land the local Wongunk Indians called Quonehtacut. Oldham’ s descriptions of a slow-moving river full of salmon, forests teeming with game, and fertile soil induced a group from Watertown to migrate to present-day Wethersfield the following year. They encamped at a site the Indians called Pyquag, meaning “cleared land.” With word of the region’s abundance traveling fast, settlements were established almost concurrently at nearby Windsor and Hartford. By the end of 1636, about 800 settlers populated the three towns. In 1639, they collaborated to produce the Fundamental Orders, what many historians consider to be America’s first written constitution. 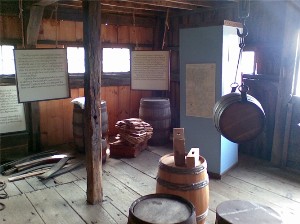 Good stuff. The Cove Warehouse speaks of this sea-faring past; it’s a little bit odd now, as Wethersfield is hardly thought of as a maritime town. But back then, when the river was a bit different, the Warehouse was an important stop on any trip to the Caribbean. It became a hub of coopersmithing (barrel making) for rum runners. Wethersfield was also quite famous for it’s red onions and the so-called onion maidens who farmed them. Mr. Lasher told us some story about how you could always tell the onion maidens because of the callouses on their knees. Oh boy, this guy was telling us thinly veiled dirty jokes all the while teaching us about the rich history of the area!

We learned about how the warehouse was a fish house in the early 1900’s; back when shad and alewives filled the Connecticut River. In winter, the locals devised an ingenious way to obtain, store, and sell blocks of river ice. In the great Connecticut River flood of 1936, the warehouse was picked up and moved from its foundation – only to be picked up and moved back by a massive swarm of criminals from the old state prison next door.

We really enjoyed our quick little jaunt to the Cove Warehouse and meeting the Honorary Mayor of Griswoldville. This didn’t quite conclude our day in Historic Wethersfield, as Ed wanted to show me the site of the infamous old state prison a half mile away or so. All in all, CTMQ had a very successful day. Of course.

Oh, years later I read The Witch of Blackbird Pond by Elizabeth George Speare which includes scenes here at the Cove Warehouse. 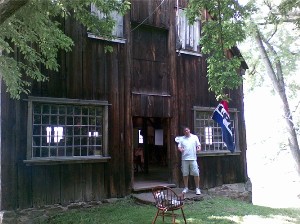