I Could Go For A Steam
City Steam Brewery Café, Hartford
Several Visits over the years 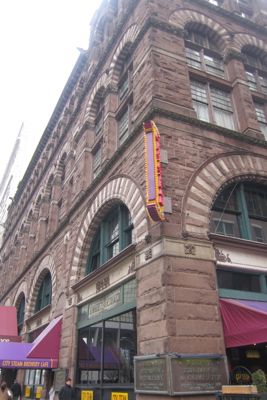 [*What follows is a somewhat long, but fascinating (to me) history of the building and all things steam in downtown Hartford. So here’s the elevator conversation about City steam: Really cool building, pretty decent food, fun comedy club, weird layout and they brew way more beers than just Naughty Nurse and Blonde on Blonde. But you really should read the rest of this page, especially if you’ve ever wondered why that expensive restaurant on top of the Hartford Steam Boiler Inspection company was called the Polytechnic Club. Trust me, it’ll all make sense in 10 a few minutes.]

If you want, skip everything and just check out City Steam’s interior on Google Street View. It’s really cool.

Here I am again, starting to write a page about a place I’ve been to 15 times over the last 15 years. I know that sounds like it would be easy to do, but for some reason it’s actually somewhat challenging. I feel like I should have so many profound and unique thoughts about City Steam – but I don’t.

But I’ll think of a few…

If you are like me, you may have ignorantly thought at one time that City Steam only brews a few somewhat pedestrian beers on site. I have no idea where I got that notion, even after having visited so many times, but it was in my brain. Just sitting there, infecting me.

Let’s be honest here; City Steam really promotes their “name brand” beers a lot and pretty much ignores everything else. When you sit at the bar, the only tap handles with names on them are the two or three beers you know about. Sure there are menus and stuff, but… I’ve now been there a few times and I swear it, the regulars next to me were only drinking “The nurse” or “the blonde.” 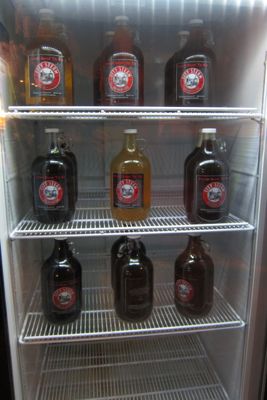 What was not a revelation was that City Steam is housed in a beautiful old brownstone building on Main Street, originally called the Cheney Building. In fact, according to the City Steam website, “The Cheney building is regarded as the finest example of Romanesque architecture in the United States.” Wow! That takes gumption. Either that, or a somewhat lazy website editor.

The architect was none other than H.H. Richardson, considered one-third of the USA’s “Holy Trinity of Architects.” The other two are Louis Sullivan (a huge Richardson admirer) and Frank Lloyd Wright (a Sullivan student). Richardson is most definitely an icon. So I want to say that City Steam meant to say, “The Cheney Building is a great example of the work of the finest Romanesque architect in US history.”

There, now it makes sense. Here’s why the building just looks cool though: The lowest tier is defined by a series of huge round lighter Berea limestone arches in striking polychrome bands, a motif repeated in the stories above at an increasingly smaller scale. Seriously, just look at it.

The building opened in 1877 for the Cheney Brothers silk manufacturers in Manchester. It was originally a multipurpose structure with five small shops on the ground floor, and offices and apartments above. For many years afterwards it housed Brown, Thomson and Co’s department store, and later the G. Fox and Company store.

Whoa WikiStevia, slow down there. Our CT Cheneys are pronounced Cheeney. They dominate my Manchester pages, but you can, and should, start simply, here. Brown Thomson’s is always mispronounced Thompson’s. G Fox is legendary in Hartford (See my visit to Ms. Fox’s home here and what was her farm here). The City Steam space was used for Brown Thomson restaurant in the 80’s before it became City Steam under the same owners in the mid-90’s. I knew a few coke heads who worked at BT’s in the 90’s. 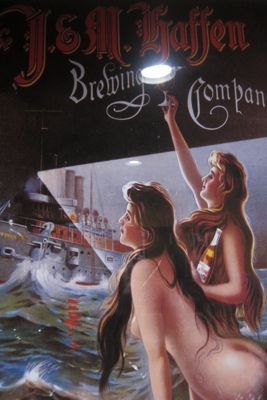 Coming full circle, the building is now officially named the Richardson Building, after its architect. City Steam makes it clear, “We’ve brought back the warmth and charm of the old days. In fact, many of the cast iron railings and millwork were salvaged from the original department store.” That’s cool. My 3 minutes of research tells me that this may be the only Richardson building in Connecticut. Which is weird, because there are a ton in Massachusetts and in New York.

Now that the history of the building is out of the way, what about the somewhat odd name? On first thought, you may think it has something to do with the even more oddly named Hartford Steam Boiler, right behind City Steam down on Columbus at Constitution Plaza, which is an insurance company and not an actual giant steam boiler.

I thought wrong. Hartford Steam Boiler Inspection and Insurance Company is (now) a re-insurer and part of Munich Re. The company was founded on June 30, 1866. The company was conceived at a time when catastrophic boiler explosions were common events, one occurring about every four days. Wow. More sourced Wikipedia:

During this time, a group of industrialists and business leaders in Hartford, Connecticut, formed a group to discuss technical and scientific issues of the day. This group, the Polytechnic Club, included such distinguished business people as Francis A. Pratt and Amos Whitney the founders of the Pratt & Whitney, and Elisha Root, president of Colt’s Patent Firearms Manufacturing Co., among others. 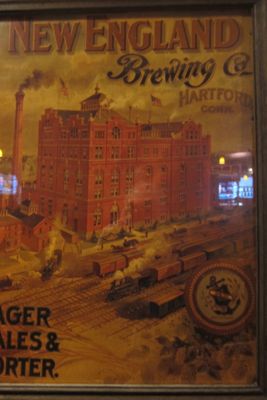 One of the founders of the Polytechnic Club was Jeremiah M. Allen, who would become president of The Hartford Steam Boiler Inspection and Insurance Company and the principal American figure to develop and apply the principle of combining boiler inspections with insurance.

So… for years that chic-chic restaurant in the HSB building was called The Polytechnic Club and it confounded everyone. (Now it’s called On20.) HSB has nothing to do with City Steam’s name. For that, we have to look a few blocks south down Columbus Boulevard to the Hartford Steam plant – a totally different beast.

The Hartford Steam Company has a cool little history page which I’ll sum up: Hartford Steam serves many of the city’s historic buildings and government facilities, including the Old State House (CMTQ’s Visit), the Supreme Court Library (CTMQ Visit), the Appellate Court and City Hall and pretty much all of eastern downtown including Constitution Plaza and… City Steam Brewery.

And by the way, in 1962, the Hartford Steam was the first company in the world to commercially own and operate a combined district heating and cooling system.

I think you’re getting the picture now… Hartford Steam has engineered a way to run steam pipes into City Steam’s brewery café, enabling them to power their 23-barrel brewery with “city steam”. You can see the steam firsthand when the bartenders blow their antique steam-whistles. The head brewer claims that brewing with steam is the best.

So now you know… The Hartford Steam Company powers City Steam’s brewing process, as well as many other buildings in downtown Hartford, including, coincidentally, Hartford Steam Boiler right behind City Steam which is actually an insurance company.

When steam was introduced to the brewing process in the mid-1800’s, it was the epitome of modernization. No more stoking fires or shoveling coal to keep the kettles boiling! All a brew master had to do was turn a few valves and the vapor started rolling. Better yet, steam provided a faster, more consistent flow of heat and, in turn, a better brew of beer.

But before we talk a bit about the beer, it would be a disservice to ignore City Steam’s other offerings: namely lunch, happy hour, dinner, a lounge area and the long running Brew Ha-Ha Comedy Club. I’ve eaten here a bunch of times over the years and can’t think of any time when I’ve been excited or disgusted by the food.

They do try to gussy up standard pub fare, but they really shouldn’t bother. I mean, I get it – the space is beautiful so they almost have to try to match the food up to that a bit… But it’s just never really done it for me. The comedy club has been around since 1987 back in the Brown Thomson days. It’s down in the basement and has hosted some top notch comedians over the years – before they’ve hit it big. 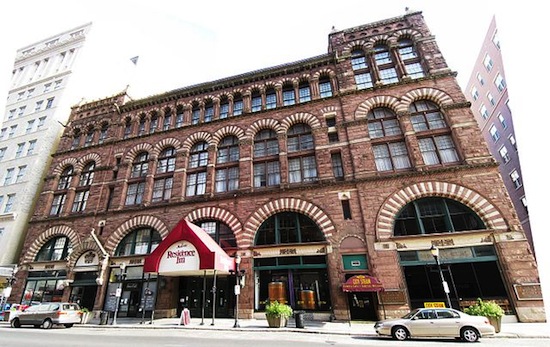 I’ve seen a few shows there and it’s a fun place.

Ok, the bar and the beer. Try to go when there is no live music act blaring terrible white guy music at you. Here, they set up the acts on a little riser right in the middle of the bar dining area and always – ALWAYS – allow them to play their Jimmy Buffet and Van Morrison ten times too loud. Always. So avoid that. 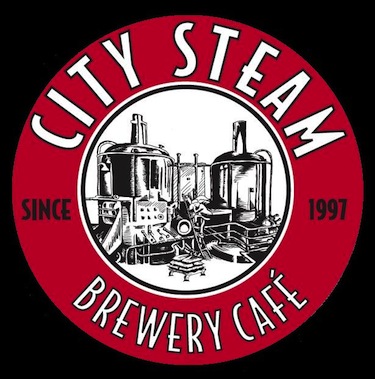 The bar itself is really nice and there is a large pane of glass that affords a nice view of the huge copper brewing vessels. Copper is a motif found throughout the bar, and it really ties nicely into the whole steam pipes and whistles theme.

There are a bunch of framed vintage beer and brewery posters here and there and I think they’ve toned down the tacky stuff a bit recently – which is good.

When you go, be sure to consult the beer menu and not just the taps. While the Innocence Ale is good and the Naughty Nurse and Blonde Ale are revered, I strongly suggest you get crazy and try some of City Steam’s other offerings – which change fairly frequently. They also sell beer by the yard in these newfangled giant vessels that I’m sure is a fun idea if you’re a 24-year-old out with your boys.

And I’m sure the bartenders hate filling them.

Phew, not really what you were looking for on this page, but I don’t care. I enjoyed writing it.