Graywall Farms is part of the wonderful Farmer’s Cow. 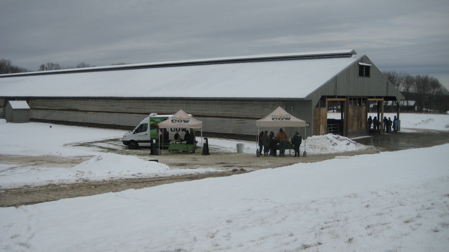 People visiting our farms would often ask, “Where can we buy your milk?” That’s when we realized that people were looking for local, naturally-produced products, instead of milk and other products from unknown origins. So we formed our own company and The Farmer’s Cow was born. After a lot of hard work, The Farmer’s Cow products are available in Southern New England and New York.

If you appreciate fresh, humanely-produced milk, dairy products, and eggs that are free of artificial growth hormones (rBST), please become part of The Farmer’s Cow story by buying our products at your local grocery store or for where they are served at local restaurants, coffee houses or markets. 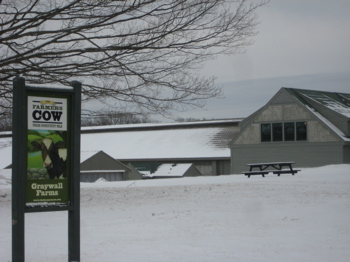 I’ll plop that blurb at the top of each Farmer’s Cow farm visit.

After the rousing success of our first Farmer’s Cow Open House back in August at Cushman Farm in North Franklin, I was excited for another fun day in Lebanon. Never mind that the weather in August is slightly different than the weather in February – I figured that seeing a working dairy farm in the winter would be an interesting experience for me and Damian. 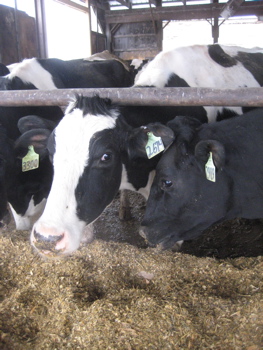 The trip started off well, with a post-tantrum Damian falling asleep within 30 seconds of leaving the driveway. Ahhh, this meant he’d get a decent nap in before the farm, which is smack-dab in between I-384 and route 2. I opted for the northern approach, taking me through the quaint towns of Andover and Columbia. I don’t think I’d ever driven through Columbia before. It’s quite lovely… And offers me the opportunity to share some insight into my brain.

Aside from an old rail bed trail, I’ve always listed Columbia as one of the few museum-less towns in the state. In fact, I really didn’t have anything of interest for Columbia. So as I drove slowly through the center of town and along the green, I kept my eyes peeled. I noted a couple signs and a memorial marker with the name Eleazer Wheelock on them. Get home, hit Google and:

Eleazar Wheelock, a Congregational minister from Connecticut, founded Dartmouth College in 1769 and served as its first president. The last of the Colonial colleges, Dartmouth was established by a charter granted by King George III, with funds from the second Earl of Dartmouth and others and a grant of land from John Wentworth, Royal Governor of the Province of New Hampshire. Wheelock had earlier established Moor’s Charity School in Lebanon, Connecticut, to provide education to young American Indian men and train them for missionary work. Hoping to expand his school into a college, but unable to gain a charter in Connecticut, Wheelock looked to the north, where settlements were growing and, with them, the need for educational institutions. Samson Occom, a Mohegan Indian and one of Wheelock’s first students, was instrumental in making Wheelock’s dream a reality by raising funds and goodwill from English and Scottish missionary organizations.

What was Lebanon in 1769 is now Columbia. And I saw the old Indian School building on my drive, so I poked some more. Turns out, Columbia opens up the school during the town’s Harvest Fair and the Columbia Historical Society operates it as a museum. Voila! One less museum-less town – and with a really cool story to boot. Here’s everything in Columbia if you’re interested. Onward to the farm! 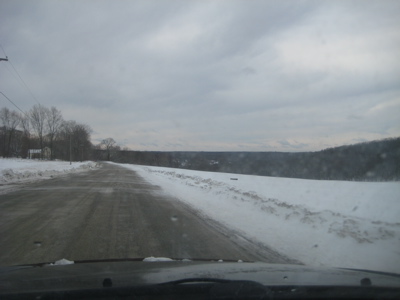 I tried to get a picture of snow blowing across the road to the farm. I failed.

Graywall Farms is pretty far off the beaten path. Here are the details from the farm itself:

Graywall Farms, operated by Robin Chesmer and his son Lincoln, started business in 1989 when they leased a 185-acre dairy farm and purchased 80 dairy cows and farm equipment. The farm real estate was purchased in 1992 after the owner sold the development rights to the State of Connecticut therefore making the land more affordable for farm use. Graywall Farm has grown to include 700 acres of owned land, 400 dairy cows and 280 calves and heifers, mostly Holsteins. They grow corn and hay to feed their animals. Significant capital investment has been made in new cattle barns, milking facility, feed center and a manure management system. Six employees help them on the farm including Robin’s son-in-law, David Hevner who manages the calves and young stock. Facility design places high emphasis on labor efficiency and cow comfort. 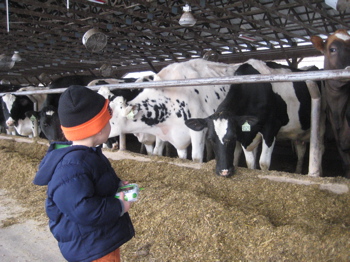 That’s all cool. It’s also cool that they have the gumption of hosting this President’s Day open house event. And it didn’t matter that it snowed a few inches that morning of that the wind was howling , the kids need something to do, darnit, so the event moved forward. There was actually a decent crowd gathered at the farm and Damian and I quickly huddled over to the sign-in and free cookies/hot chocolate tents.

Unfortunately, I knew Damian wouldn’t entertain the idea of riding the horse-drawn sleighs across the frozen tundra, so we immediately joined a tour of the cow barns. Now, Damian hates snow and cold which is perfectly normal and fine (Hoang feels the same way), except that Damian also hates gloves and mittens and boots and snowsuits. He has some sort of sensory issue with all that (like he hates clothes that make noise I think) and, well, I happen to almost never wear mittens either. 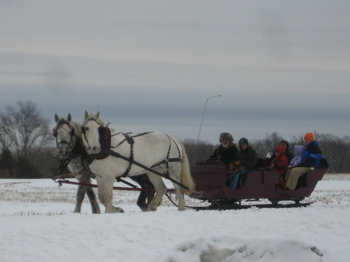 As a result, the cold just beat Damian down. He was entertained by the loud mooing of the cows and the impressive waterfalls of urinating cows nearby (even signing to me for “more more!” cow pee), but he couldn’t last for the full tour.

So we walked the rest of the way around the cow barns and back to the car. This is how these things go with special needs kids sometimes, and I’ve come to accept it. It helps when the events and museums are free, that’s for sure! (Actually, with the two cookies we scored, this was better than free.)

I was hugely impressed with the number of families who came out for this event and once again at just how organized the Farmer’s Cow folks are – not to mention how important I feel their mission is. As I said after the first event we went to – you should really try to get to one of these things; just perhaps in the summer if you’re a wimp like my wife and son. 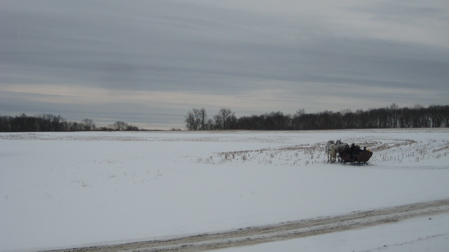