[This is the second SLT property of three in a row that I roamed about. I’d suggest starting with the Bog Walk for the sake of continuity.] 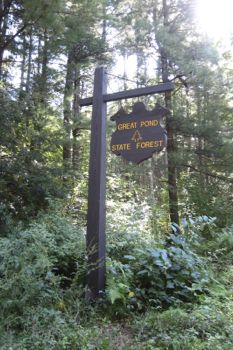 Sure, I have (literally) over 100 other pages to write about older experiences for CTMQ, but whatever. I’m writing this one from yesterday first. Because I can.

And because I am one proud and happy dad. Sort of.

I went hiking with my son Calvin and it was straight up awesome. We had a blast, he did great, and the Great Pond Forest in Simsbury was the perfect place to get his hiking feet wet. But something was missing – my seven-year-old son, Damian.

I’ve written before that, of all the challenges Damian’s Smith-Magenis Syndrome poses, one of the ones that often goes unsaid inside my head is that I’m not able to share many of those father-son moments I always dreamt of realizing. For me, it was never playing baseball in the backyard or fishing for sunnies on an early spring morning. It was hiking. It’s always been hiking for me ever since I thought about having chidren.

I love hiking and grew to love it very early one with my dad and brother. We have photo albums of hikes in West Virginia and Pennsylvania from my pre-K days. The three of us did a week-long trip through the White Mountains when I was 11. 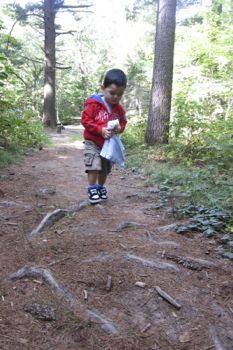 The dream of just me and my boys, alone in the woods, talking smack about Mom…

But Damian is a very unique little boy. While he’s physically capable of walking a flat mile through the woods, putting that into practice, at least for his first seven and half years, has been torture. He, quite simply, is not wired to enjoy the outdoors. And when Damian doesn’t want to do something… well, just go Google Smith-Magenis Syndrome and get back to me.

(Note: I haven’t – and won’t ever – give up hope. The very few times I’ve gotten him in the woods without too much fight have filled my heart with joy. I will keep trying with him and truly see a day, perhaps when he’s in his late teens, when he and I will be able to go out and spend a couple hours in the woods without incident. UPDATE: This is part 2 of 3 SLT hikes in a row. I suggest you continue on to the third after this one.)

Calvin and I made our way out to the bumpy stone and dirt entry road to the property. As I understand it, Great Pond Forest is a (large) block of the Massacoe State Forest which has another parcel over by Stratton Brook State Park. But the piece off of Great Pond Road is the one with all the circular/connecting trails. 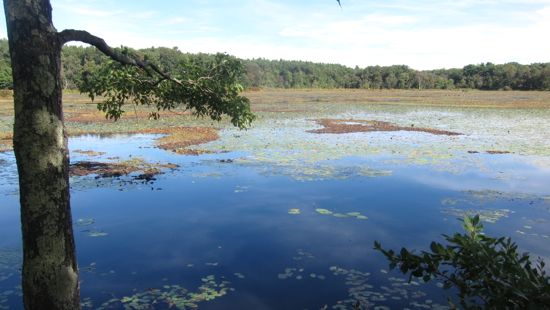 The weather was perfect and the trail was flat. Calvin was a little hesitant at first, choosing to hang on to his beloved “Blanket Bear” for the first quarter mile or so.

Shortly into the woods, we walked through a mature stand of pine. This was, I think, the first time Calvin could really appreciate the majesty of these trees, and I love this picture of him in awe of their power: 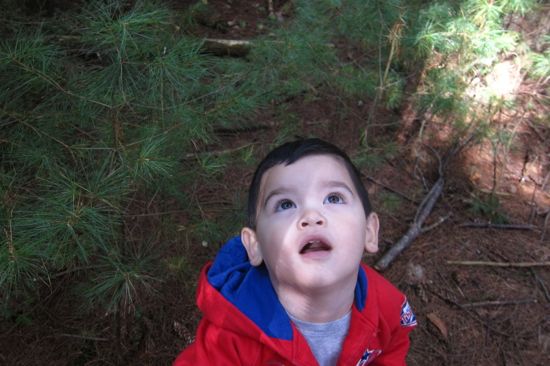 The trails here aren’t marked with blazes, but the main one around the pond is cleared well and is quite popular. (For my purposes, I only saw two small patches of poison ivy along the way and scooped up my curious child before he could pick a leaf and ask me, “Papa-what-that?”)

As we first approached Great Pond, we stopped to read the large stone monument out in the woods. Great Pond exists because of pioneering forester James L. Goodwin. 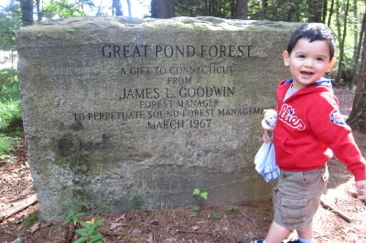 The James L. Goodwin State Forest is dedicated to his work in eastern Connecticut, but his legacy spreads statewide, and Great Pond is a part of that. (Flash forward to 2016 and a hike there with both boys.) Here Goodwin began a commercial nursery in 1932. On 35 acres he developed a varied-age white pine plantation, the vestiges of which can still be seen in the pine grove south of the pond. (Where the “Calvin in awe” picture above was taken.) It was his land, willed to the state after his death, which became the nucleus of today’s state forest. 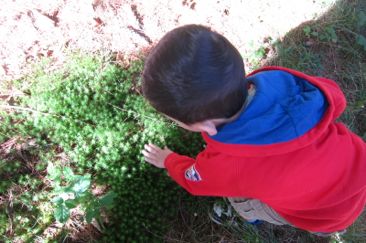 I should note that the other tract of the Massacoe State Forest I mentioned, sort of Southwest of here but without hiking trails, was a place where Goodwin showed that the forests that were burned down by ash and cinders from passing locomotives could be managed back to healthy forests.

Past the Goodwin monument, the trail hugs the pond and affords several vistas of open water and the waterfowl that visit it. (You can hear them quacking in this video of Calvin “reading” the Goodwin sign.)

Once the trail moves away from the water a bit, Calvin decided to run. This kid ran for half a mile. Sure, he fell a few times from tripping on the roots along the way, but he did great. And fortunately 2 year old running is more or less equivalent to 40 year old walking.

The main trail passes through a large and very mature stand of rhododendron, and although my picture of Calvin within it is blurry, his strut is still evident and it cracks me up. 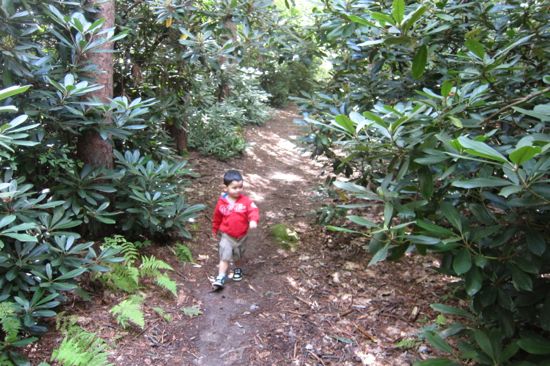 As we made our way south back towards the parking lot, we passed a few benches and picnic tables. For his part, Calvin was beginning to tire almost within sight of our car. He did it! He hiked about 1.2 miles – and ran half of it!

As a father, I loved watching his curiosity (inherited from me) blossom and his persistence and stubbornness (from my wife) be used to the good for once. As you can tell, I loved getting “out there” with my young son. 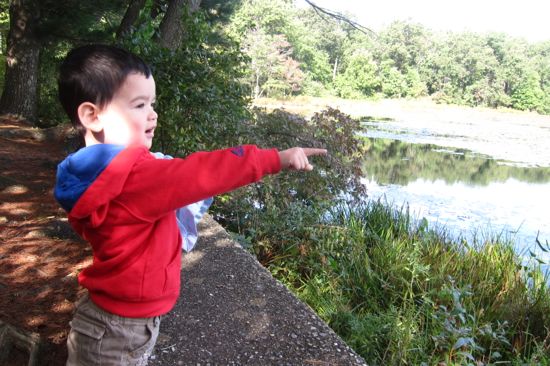 Will I remember years from now that this was his first hike? I doubt it, but maybe that’s why the Internet exists in the end.

For my own selfish reasons.

You can read more about the Great Pond Forest here, over on the Simsbury Historical Society page. It includes stuff like:

There are perfect days when the temperature reaches a certain equilibrium that makes it difficult to tell where one’s skin ends and the air begins. In the fall a flock of nearly two dozen wild turkeys passing through sends a dog into a state of alert that makes the uninitiated reconsider the wisdom walking alone in the late afternoon. The mid-summer covering of blossoming water lilies brings images of the Monet’s Giverny to life.

That’s a little much, even if it is a lovely property. 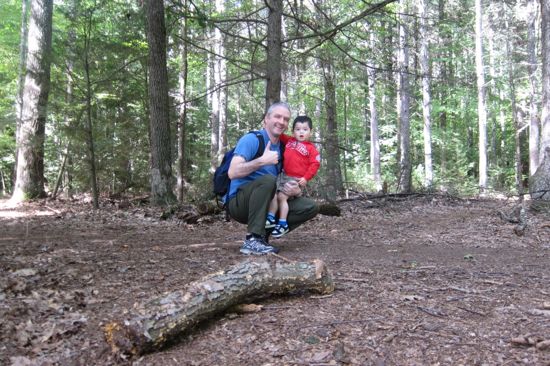 Anyway, one last bit about Great Pond – James Goodwin’s gift to the citizens of Simsbury and Connecticut is commemorated in a marker placed in the chapel area of the forest where numerous outdoor weddings have occurred.

I made a point to find the chapel (not on the main trail) and I don’t think anything other than squirrel weddings have been going on here for quite some time: 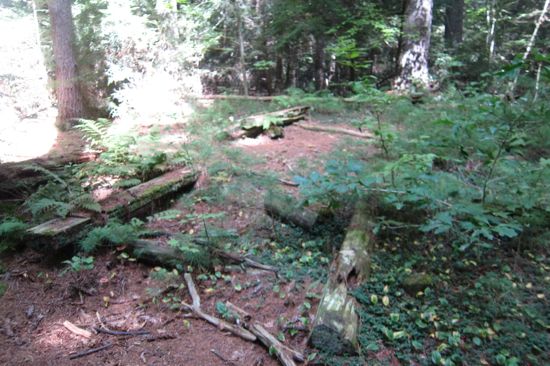