Delicious with a “Capitol” D
Capitol Lunch, 510 Main St., New Britain
Cost: $1.60 per dog with everything

Michael Stern, the food critic who wrote the book that has compelled me to eat certain “must eat” things around the state, sure loves hot dogs. Cripes, of the 60 or so things to eat in Connecticut alone, SIXTEEN of them are gosh darn hot dogs! 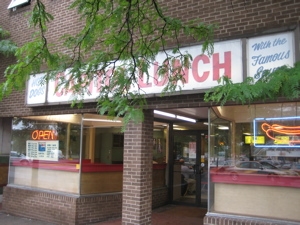 He joked that his editor said that 100 out of his 500 things we must eat around the country are hot dogs. I believe it (even if it’s not quite true.) Also bear in mind that this book is about something called “roadfood,” not necessarily, “the best possible food you can find.” It’s accessible, often cheap, and always local. I like that.

What I don’t like – or rather, I haven’t eaten in 10 years – are pork or beef products. I did eat a burger at the historic Louis’ Lunch for this website, so I figure I can eat a few hot dogs and stuff and not totally compromise my values. If it’s “for the good of the site,” it’s okay. Right? (Don’t answer that. I know, hot dogs are really never “okay” for about 50 reasons.)

Dogs on the Capitol Lunch Grill

With that out of the way – and now armed with the implicit knowledge that my evaluating of hamburgers and hot dogs is a bit absurd – we can go get ourselves a sloppy hot dog.

I used to love hot dogs as a kid. Even now, I enjoy a nice turkey dog or one of those high-falutin’ turkey-based sausage things that cost 8 bucks for four of them at Whole Foods (with flavors like Guoda with Granny Smith Apple). For the record, I think the Tofurkey dogs are inedible. 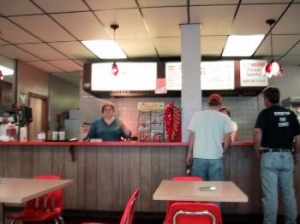 I cleared my mind of any factory farming guilt and of any thoughts of what actually goes into a hot dog. I had a job to do and I would do it objectively. I was headed to New Britain, the hardscrabble town known for its Polish population and therefore its Polish sausages and such. I figured hot dogs were close enough, so they must be good.

Capitol Lunch is located on Main Street, but don’t think for a second that means it’s on some glitzy corner of bustling businesses. Quite the opposite, in fact. The location is not dangerous, so much as it is just terrible. Away from the hub-bub of downtown New Britain, its storefront stands next to some abandoned stores and across the street from a decrepit lot. But it didn’t start out here… Or with hot dogs. 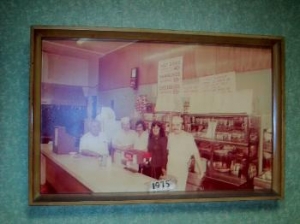 The location was originally a little shoe shine shop that began to sell hot dogs to attract customers. Eventually the hot dogs became so popular that Capitol Lunch was founded in 1929. Since then the famous Capitol Lunch Hot Dog hasn’t changed much. They have relocated in New Britain a few times over the years, always growing and expanding. (Note, they’ve never been located in the capital city of Hartford. Weird.)

Excerpted from here. (Note, the inside pictures on this page were taken from Roadfood.com.)

“… The dogs themselves are so taut that they audibly snap when you bite into them. They are gently garlicked, porky enough make taste buds dance for joy. The sauce is superb: a fine-grind all-meat chili that is smoky, sweet, and powerfully addictive.

Ambiance is as it should be in an urban dog house: harsh florescent lights and bare Formica tables. Service is minimal, but it is polite and efficient. Frankfurters are bunned and dressed so fast that you will scarcely have time to reach for your wallet before the hot dogs are on their tray and ready to go.” 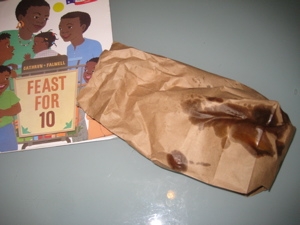 I arrived right at noon on a weekday and most of the tables were taken. As noted, the decor is very spartan and reminiscent of elementary school. It matched the menu board, which really only offers dogs, burgers, fries and a few other snack items. No matter, I’d wager 90% of the customers come here for the dogs.

(It must be noted that the walls were adorned with two things – pleas to retire Babe Ruth’s number at ALL MLB ballparks and an odd assortment of photos of rock and pop stars. Britney next to Ozzy next to Aretha. Weird.)

I ordered two “with everything” to go. Everything I read told me I absolutely HAD to have the sauce. So I did. Despite only being wrapped in some flimsy wax paper, they held together well during the 20 minute ride home. During which, my car began to smell like a chili factory. 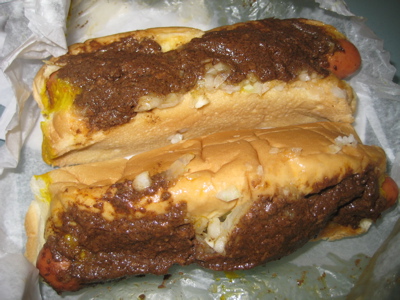 Bite… Yes, there is a definite “snap” to these dogs. A pleasant snap, really. Somehow, the buns were not soggy (which is something that makes me gag) and the pile of onions was not overwhelming. Since I’m a mustard man, I appreciated the lack of ketchup.

The hot dogs are small (so far as hot dogs you buy in restaurants go… I have some monsters ahead of me), so the additional meat fills out the meal nicely. The sauce, to me, is pretty good. It has no zip to it; no heat. I like some zip and heat if I’m going to eat chili, so I was a bit disappointed by that. But this is “Greek-style meat sauce” and I really liked the flavor. The hot dog itself was delicious. They guard their sauce recipe closely and only describe it on their website thusly: “Not hot, no beans; just meat and spices. Goes great with mustard and onions. Made the same way Grandpa Art made it years ago.” Fair enough. 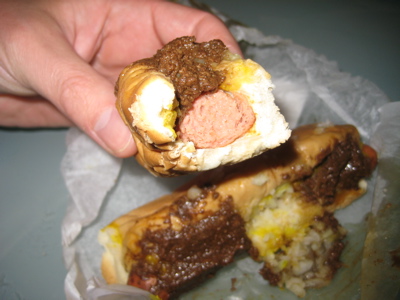 Cappie’s (that’s what the “in” crowd calls them) says of their dogs, “Cappies has been using Martin Rosols hot dogs since we have been established. Specially made for us, these tasty dogs have an all-natural casing which gives them a snap when you bite into them. Everything is made to order, and in front of the customers so that you know exactly what your getting.”

I’m quite sure that last bit is a bit of sarcasm. Really, does ANYONE know exactly what they’re getting in a hot dog? 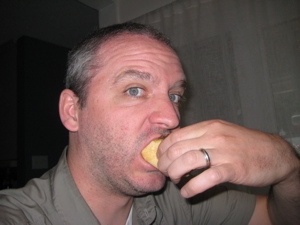