My first thought upon entering Il Bacio was, “since I can’t get the phrase ‘Licensed to Il’ out of my head, wouldn’t it be awesome if they had a Brass Monkey ice cream or gelato flavor?” Sadly (and expectedly), they did not. Because really, that would be kind of gross… but maybe not. Someone will do it someday. 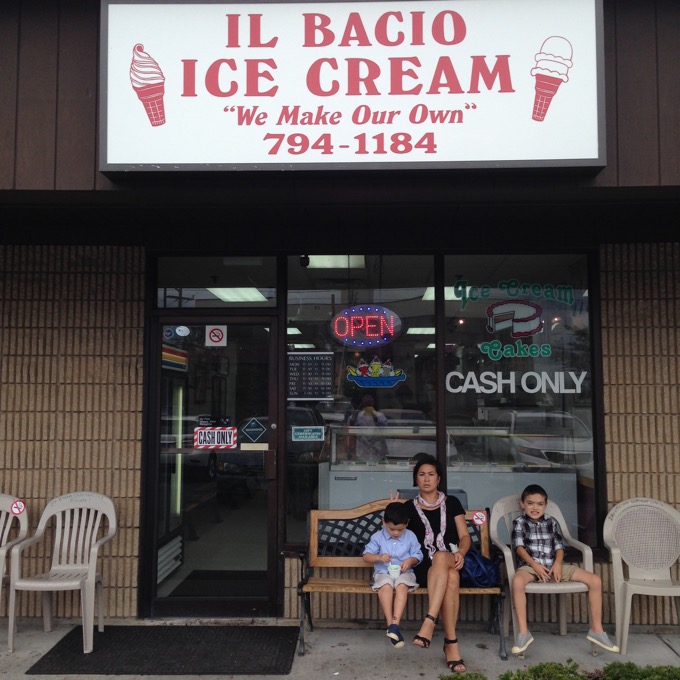 But let me back up a little bit.

My thoughts while crossing Danbury from Tarrywile Park to the strip mall where Il Bacio resides were, “holy crap, Danbury is the most ridiculous town to try to navigate.” I’ve driven in and through pretty much every town in Connecticut and I would put Danbury right up there with Greenwich for being the most difficult.

My thoughts while parking in the lot right in front of the tiny storefront were “wow, if this place is any good, they are truly a diamond in the rough,” as the strip mall contained a lot of low-rent storefronts. 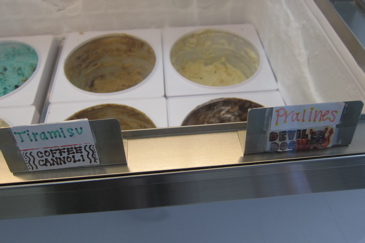 My thoughts upon scanning the available flavors were, “my word, so many inventive and delicious sounding options… at least I get to pick two since Damian is with me.”

I needed an extra two minutes or so to choose, and the young woman was happy to oblige, as she had some important texting to get back to. So now would be a good time for you to read what the New York Times had to say about this place in 2010:

Il Bacio means “the kiss” in Italian, and in this long hot summer, there may be no kiss sweeter than a lip-cooling lick of Il Bacio’s house-made ice creams.

Il Bacio’s diminutive space — between a laundromat and a martial arts studio in a small strip mall — is disproportionate to the wondrous array of ice creams that Tony Nascimento makes in the back of the store. Of the 400 different flavors he has created in the 22 years that his wife ,Gina Nascimento, has owned the shop, more than 30 are available on a daily basis. An additional 16 or so dairy-free Italian ices are also offered.

Unlike some “homemade” ices, which are assembled from canned extracts, Il Bacio’s products are derived largely from scratch, in a process that involves a blend of creams from three dairies and often includes fresh fruits and purées. Such attention to detail pays off in rich, seductively smooth ice creams that pulse with flavor.

Il Bacio’s reliance on fresh ingredients does result in minor fluctuations from batch to batch. A recent sample of peach ice cream, for example, reflected an appealing note of slightly tart fruit, which may not be evident later, as the peach harvest winds down.

“My goal every time is perfection,” Mr. Nascimento said, “and if I can improve it, I won’t hesitate to.” 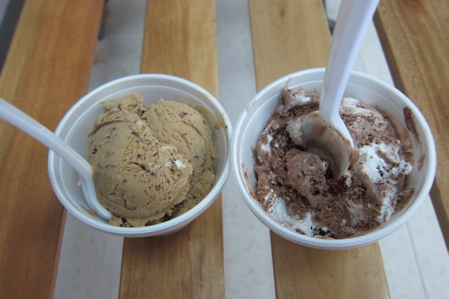 Coffee cannoli on the left, Devil Dog on the right

What in the world am I going to add to that piece by a real food writer? Hm. I settled on coffee cannoli and Damian chose, because I gave him no choice, the Devil Dog ice cream. I’m no fan of devil Dogs at all – in fact, I kind of hate their dry processed taste, but I’d read elsewhere that the ice cream is fantastic so that’s what I went with.

And I’m very glad I did. The Devil Dog flavor is perfect. Take what you want to like about devil dogs (chocolate, creamy cream) and mix it up in some super creamy ice cream and the dryness is gone. The real chocolate in the ice cream more than makes up for the chemical chocolate of the snack. But the spongy snack pieces and frozen cream parts come together with the ice cream to make what I think really is a perfect treat. 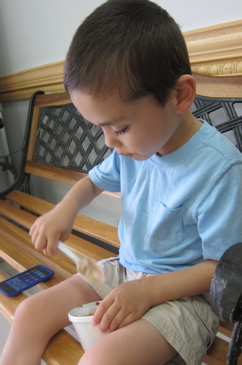 Damian is lucky I make such good choices for him. As for my pick, it was just as delicious, with the same sort of deal going on – the cannoli pieces in the rich coffee ice cream… man, I wish Il Bacio wasn’t an hour away from my house.

While Damian and I sat on a bench enjoying our scoops, some lady came in, and ordered immediately with authority: a pint of Devil Dog and a pint of coffee cannoli. It was pretty weird to say the least, what with all the choices available to her. We shared a good laugh about the happenstance and she was on her merry way.

I should point out that, despite being in this little strip mall and despite being a tiny little ice cream shop, Il Bacio’s bathrooms are very large, spotless and even a bit classy. 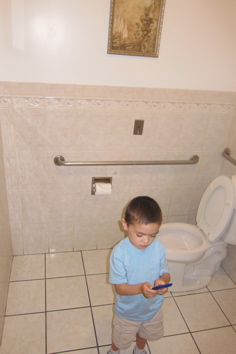 I was incredibly impressed by the whole experience. A later visit with my whole family (first picture) yielded the same positive response, even if they had no Devil Dog available. The only problem with Il Bacio is that because it’s in Danbury, finding I-84 to get back home is nearly impossible.