True story: I wanted to gain a clear understanding of how Kongscut got its name and poked around their website. Nothing. I sent an email to their general address and then asked my friend (and avid CT hiker and Glastonbury beat writer) Peter Marteka on Twitter. 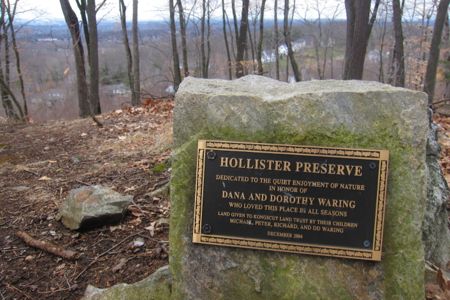 Then I mentioned “Kongscut” to my wife.

Then I paused for a second and remembered I’d read where the name came from before.

On some site called CTMQ. Yeah, I’m an idiot.

(My email was soon after answered in which it was politely suggested I could find the answer on this page. I like these people.)

“The Kongscut Land Trust comes from a Native American Indian word meaning ‘place of wild goose’,” I wrote on a page about a section of the Shenipsit Trail that passes through Kongscut land. I received further clarification from Kongscut’s Gerhard Schade: “Kongscut was used by the Wangunk Indians as their name for this region. We’ve been told it means “place of the wild goose” in their language. Dana Waring decided to name the land trust Kongscut rather than Glastonbury Land Trust because it would allow us to serve othjer towns also such as Marlborough and Bolton. Since then Bolton has formed a trust of its own. This is my understanding.”

Marteka noted, “It was named back before geese became such a nuisance.”

The Kongscut Land Trust was established in 1977 for the purpose of conserving open space land, scenic, natural and historic sites in Glastonbury, Connecticut and nearby towns. Our volunteers currently manage ten nature preserves totaling 300 acres for the benefit of the general public and as plant and animal habitat.

Glastonbury is an interesting town. It’s growing by leaps and bounds – which has run afoul of the fairly large native rattlesnake population. South and East Glastonbury are more Marlborough than suburban. There are many enclaves for the very wealthy up on the hills which provide views of Hartford. (At least one large Kongscut property includes a couple of these hills, which surely would be worth many hundreds of millions of development dollars. Well done, Kongscut.)

They have a bunch of properties but their site isn’t too clear on which have clear trail networks. The organization emailed me to tell me that they all have trails, though I find that hard to believe as some are so tiny. As always, I (and my boys) shall do my best to sort it out for you.