It’s always special when I meet people with pursuits similar to mine. It’s also quite rare. So when Frank Kaputa from the Connecticut Notable Trees project reached out to offer to take me to a national champion tree, I leapt at the chance.

Actually, that’s not true. I sat on the request for one… two? Maybe three years. Which in hindsight, was really dumb of me because by the time Frank and I met up on a drizzly June day, Glastonbury’s champion tree was no longer national champion. Yes, someone in Virginia found a taller and larger poison sumac in late 2020. Grrrr. 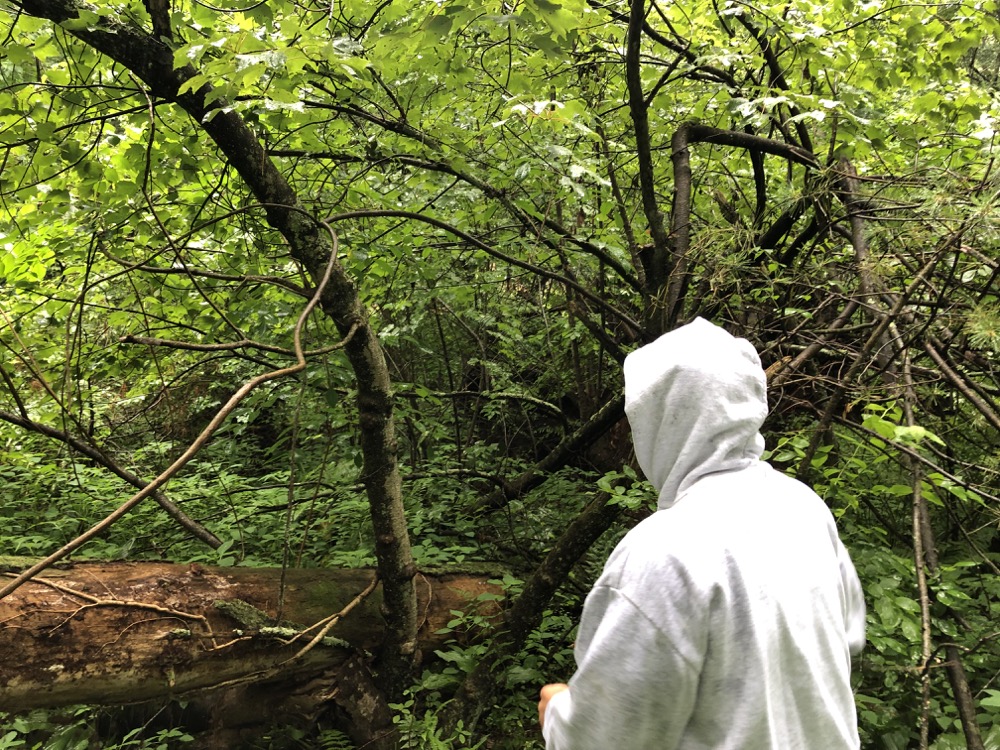 But that’s the beauty of this national champion tree nonsense. And exactly why I love talking with Frank about his passion. The whole idea that this rather small shrubby tree in a swamp in Glastonbury was the largest poison sumac in the entire US was absurd. But no one else was claiming a larger one when Frank submitted his hometown entry, so it was, by default, the national champion.

If curious, Frank and the Notable Trees Project isn’t only about national champions. They also track Connecticut champions and all other, well, notable trees. He travels around the state as much, if not more than I do, and takes measurements and pictures of hundreds of trees. I’m mildly obsessed with his obsession. As you can imagine, we had great conversation – pretty much trying to convince ourselves that we’re not that weird. Because this guy next to me is weirder. Good times. 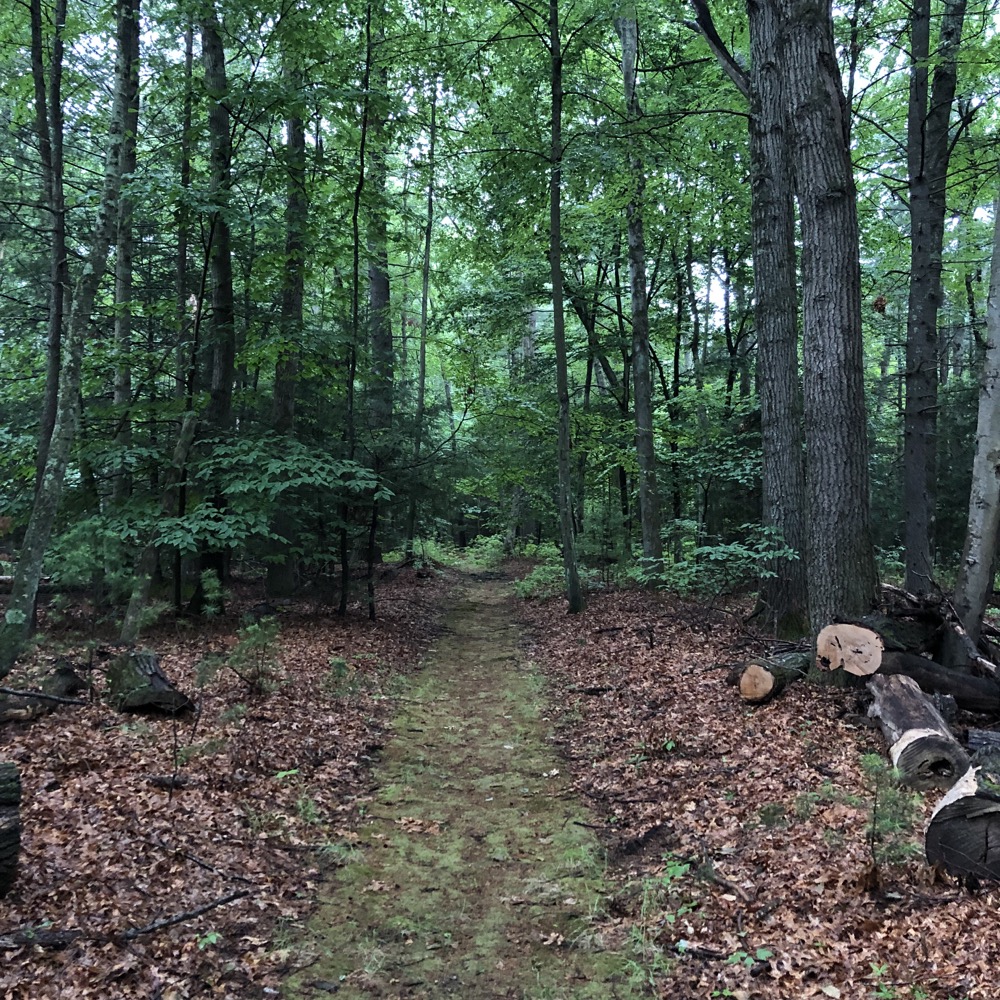 We accessed the Kongscut Land Trust’s Fern Hollow Preserve via someone’s driveway on Wickham Road that led to a trail. Kongscut says this isn’t a trailed property, but there’s definitely a trail that clearly heads towards a stream that connects to Hubbard Brook. I mean, there’s a photo of it above. It is probably used by local dog walkers every day. As for me and Frank, we left the trail once past any sight of houses and yards and began bushwhacking south and then back east into a swamp.

Poison sumac grows exclusively in wet and clay soils, usually in swamps and peat bogs, in the eastern United States and extreme southeast Canada. In a Connecticut swamp in June, everything looks the same. Just a lot of greenery. Different shades of green, but lots and lots of green. The area we were searching in isn’t large, but neither is the former national champion poison sumac. Frank had notes with waymarker trees, but we did wander for a few minutes. That allows me time to talk about the tree a bit. 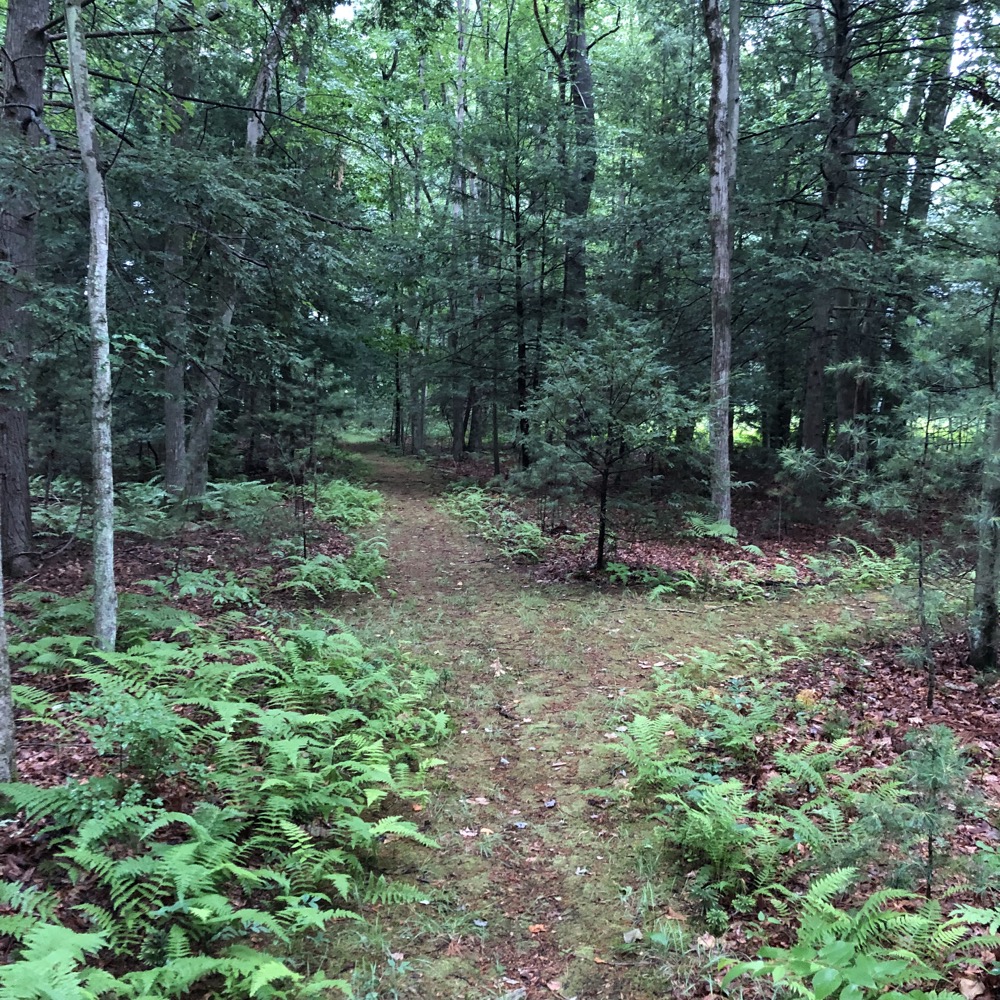 Poison sumac, Toxicodendron vernix, is related to the poison ivies and poison oaks, not to the other sumacs. It is relatively rare compared to the other members of the family. The rash-causing agent, urushiol, is the same, and it causes the same rashes. it’s been said that they cleared forests of the stuff to make way for Disney World in Orlando. You may be surprised to learn that in terms of its potential to cause urushiol-induced contact dermatitis, poison sumac is more toxic than its relatives poison ivy and poison oak.

There have been cases where people burned the trees, inhaled the smoke, and have nearly died from the urushiol affecting the lungs. Eesh. 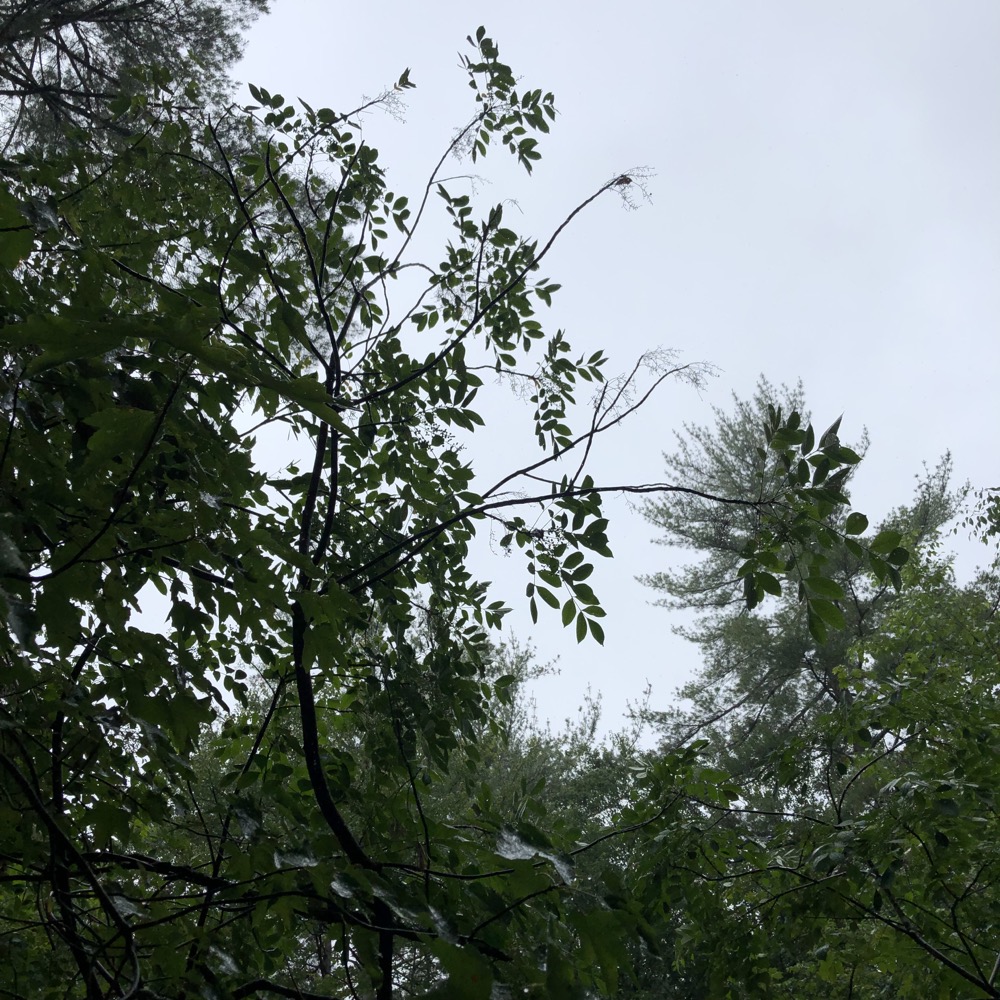 That’s it. For real.

After a few mucky minutes, Frank found the tree and… it’s a wholly underwhelming spindly thing, nearly split in two by deadfall. “How… how did anyone find this, identify it, recognize it was large for the species, think to contact you, tell you how to find it, etc?” Yes, of course I asked all those types of questions. Frank merely chuckled and put it back on me. “How do you find all the places you find? HUH?” Well played, man, well played.

(But seriously, this is nuts right?) 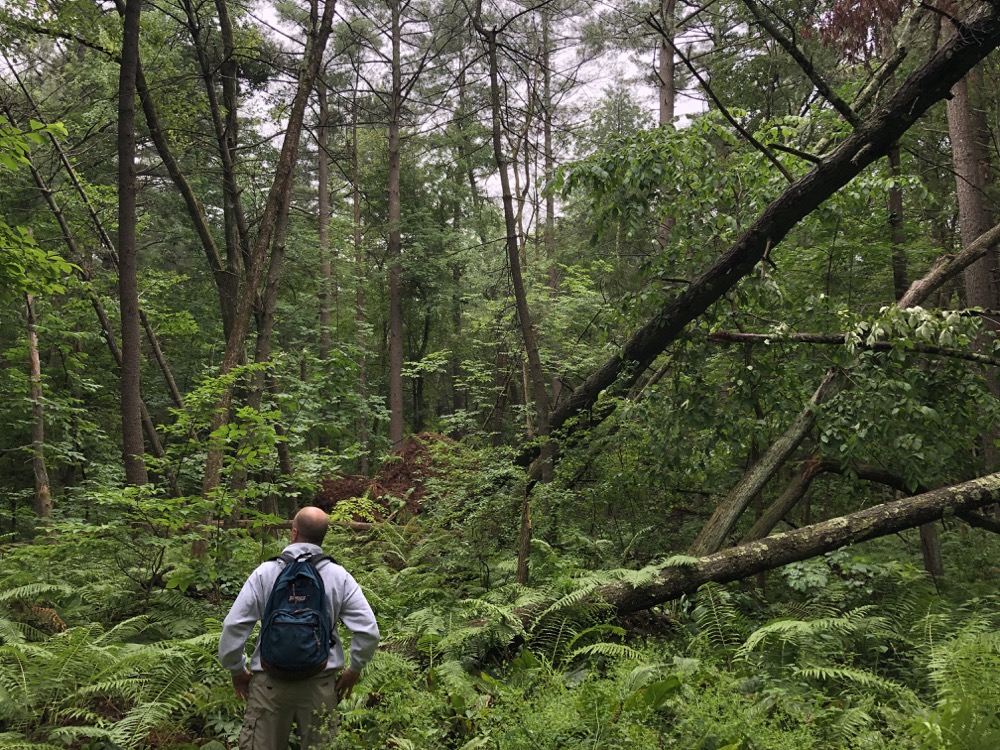 Frank took out his laser-sighted measuring tool and tape measure and had me help him take accurate recordings. He snapped a photo and updated the entry on the official website. After about ten minutes with the tree, I led the way back out of the swamp to the trail and out to our cars. I think I may have impressed my partner with my innate navigational skills all while hummock hopping and keeping our feet relatively dry. These are skills I possess, not finding large examples of random tree species in buggy central Connecticut swamps.

Lest you think we were done for the day, we were off to find a second (former) national champion tree in Glastonbury in the Meshomasic State Forest several miles away. As for the poison sumac, my name now appears on the official Connecticut Notable Trees website. On a former national champion highly toxic little tree that looks like it will probably die soon.

Proudest moment in 2021 for me for sure. 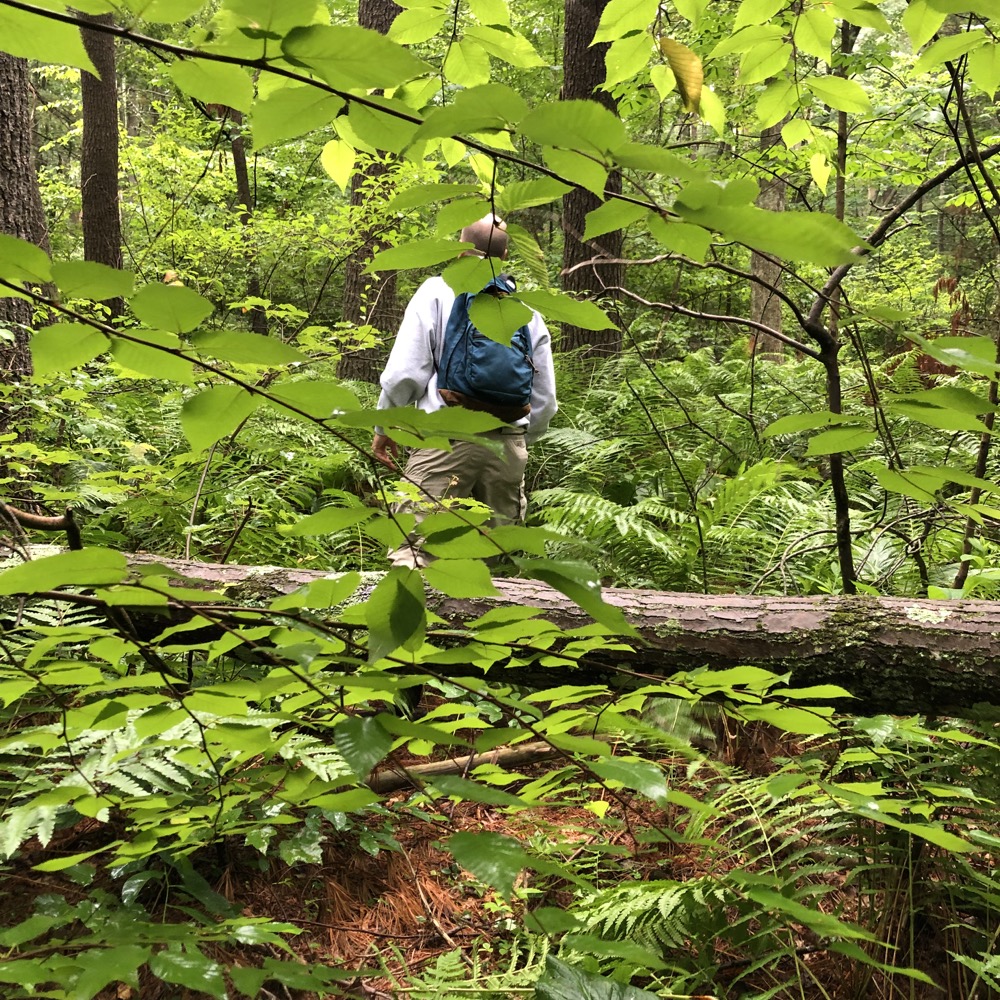 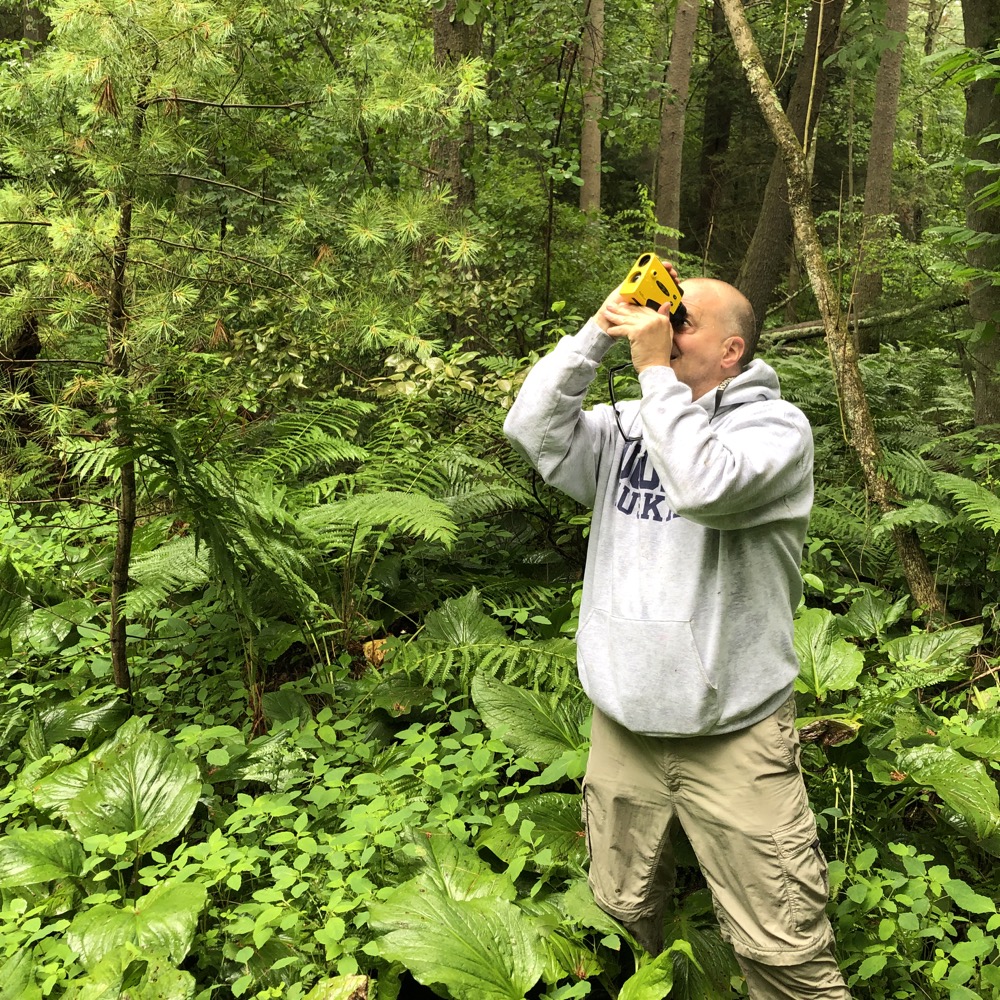