The CFPA lumps a bunch of trails under this name, so I’m going with the same on CTMQ as well. The trails are: 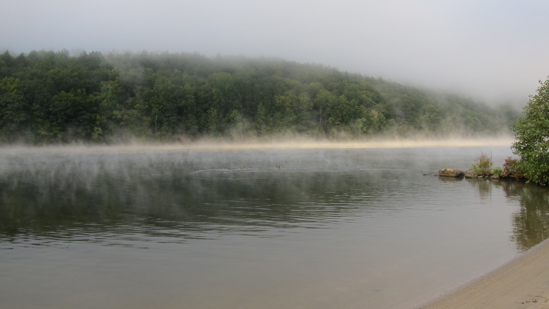 Lake Zoar from the Pomperaug Trail

Lake Zoar is the part of the Housatonic River behind the Stevenson Dam, which was built in 1919 to generate power. It’s now a large reservoir with lots of good hiking area on both shores. The area around Lake Zoar features numerous historic sites, abandoned silver and garnet mines and abandoned roads that led to now (purposely) submerged towns.

Lake Zoar, a slightly undefinable artificial bulge in the Housatonic, is about 10 miles long and is the 5th largest freshwater body in the state. Aside from the town of Zoar it buried, it is said to also cover the original village of the Pootatuck Indians, a friendly Mohican tribe.

These trails pass through two state parks (Kettletown and Indian Well), and five towns (Shelton, Monroe, Newtown on the western side, Southbury and Oxford on the eastern slopes.)