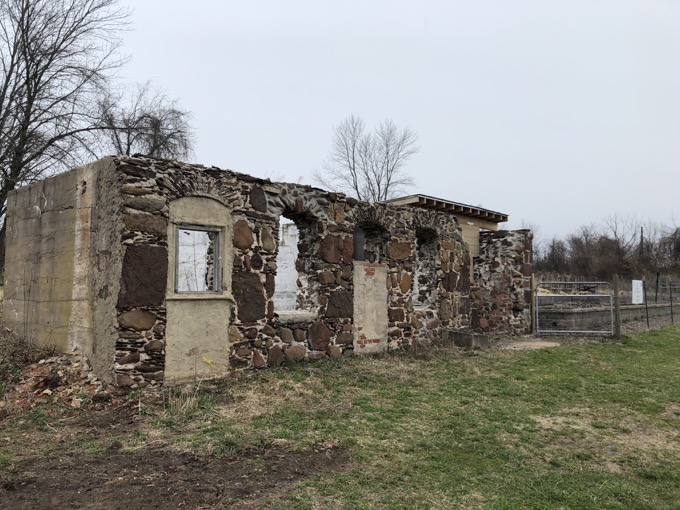 Joking aside, Bloomfield will have to “get it together” as there as been some recent development on park’s eastern border: big new houses have put a damper on things over there, but that’s life in Hartford’s suburbs.

I’ve visited LaSalette a few times for different reasons (and because it’s mere minutes from my house). I would guess the huge majority of people of come here and park in the small lot off of Mountain Road simply check out the old Captain Oliver Filley House and outbuildings and maybe walk up the hill a bit. And maybe, just maybe they seek out the unique view of Hartford here. 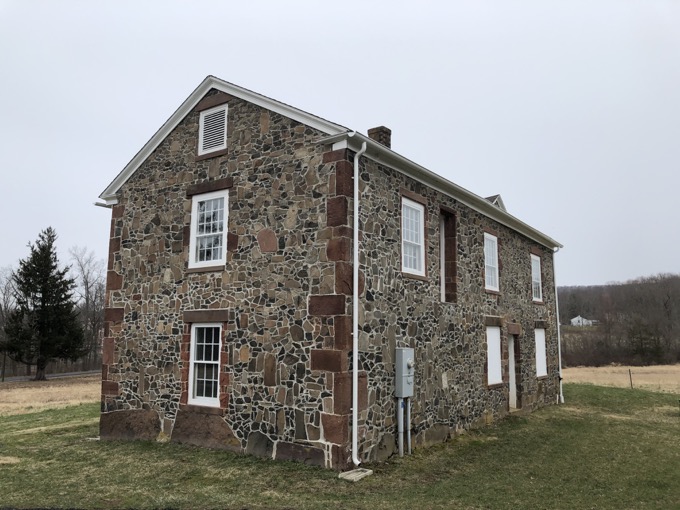 The 1834 Filley House is pretty sweet. It’s kind of the pride and joy of the Wintonbury Historical Society, even if it is not open to the public currently. (Wintonbury is a historical name for Bloomfield that some groups can’t let go.) Filley was both a tinware manufacturer and a farmer and could trace his ancestry back to the Mayflower. The Filley Tin Shop was located on this property about 1800, later moving it to Brown Street nearby. 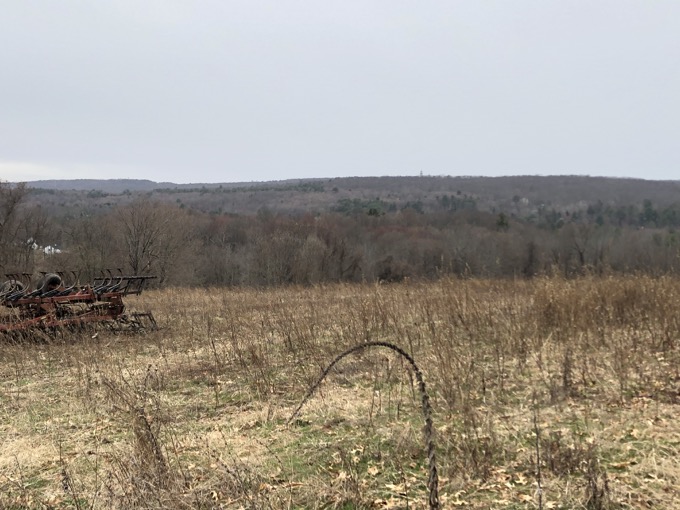 Then the house and property became the Samuel Bushnell Pinney Farm; continuing the agrarian practice which was continued here for more than 200 years. In the early 20th century, the La Salette missionaries. They are some sort of catholic something that have owned properties in Hartford, Bloomfield, Cheshire and… all over the world. They are named after the apparition of Our Lady of La Salette in France. 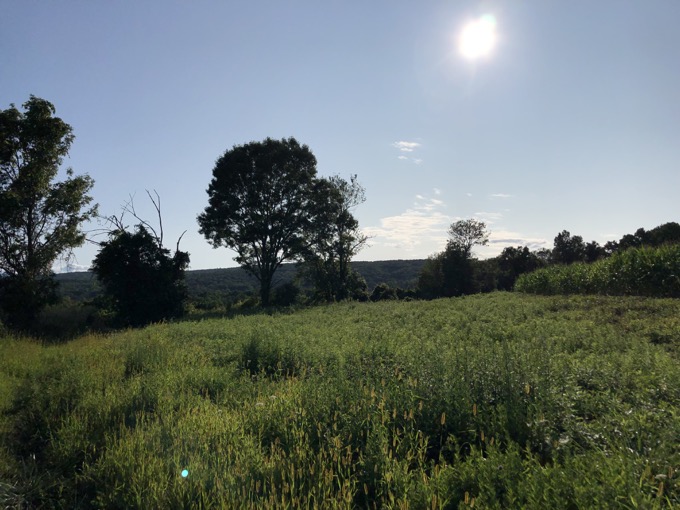 This ghost has some amazing powers:

Even the most-embittered and sin-hardened are awakened from the deadly slumber of spiritual indifference by the heart-rending scene of a beautiful, charming Lady, seated on a rough field-stone, on a desolate mountain-top weeping silently. Here, no hysterical sobbing, the safety-valve of uncontrolled grief and taut nerves, but only silent, restrained yet crushing sorrow of a deeply hurt mother. Each tear, like a glittering diamond, slowly pierces the hard core of ingratitude and indifference until the blood of compassion flows from the salutary wound.

Proud heads have humbly bowed before a Weeping Mother; blasphemous tongues have been silenced; unbelievers have cried out their exultant “Credo”; obdurate sinners have become extraordinary saints; unwilling sufferers forgot their own pain and bravely smiled to console a broken mother. 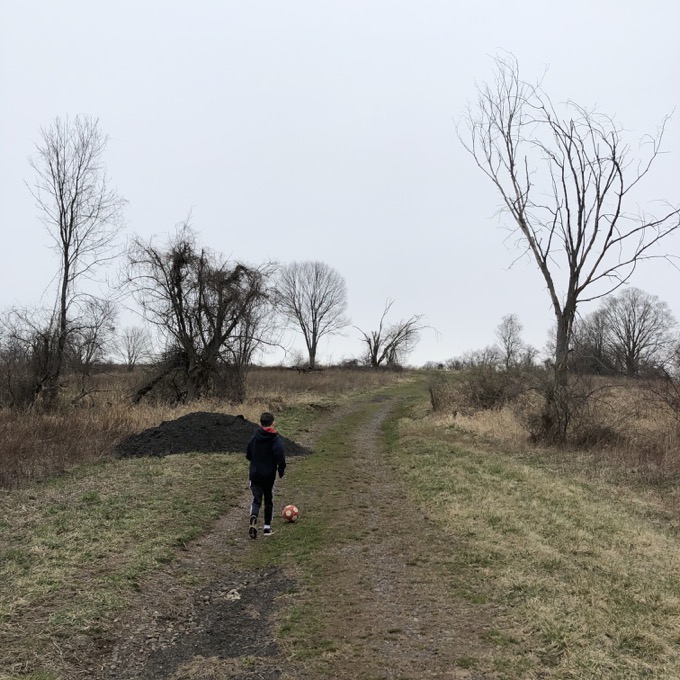 Right. Maybe it’s just me, but I’ve been to this property multiple times with its “rough field-stone” and I’ve yet to see a ghost, let alone have my “blasphemous tongue” be silenced. Anyway, the La Salettes bought the Filley house and property to use as a “country villa” for those living in the Hartford House. You can read all about it and watch a long documentary on it on the WHS site, here. 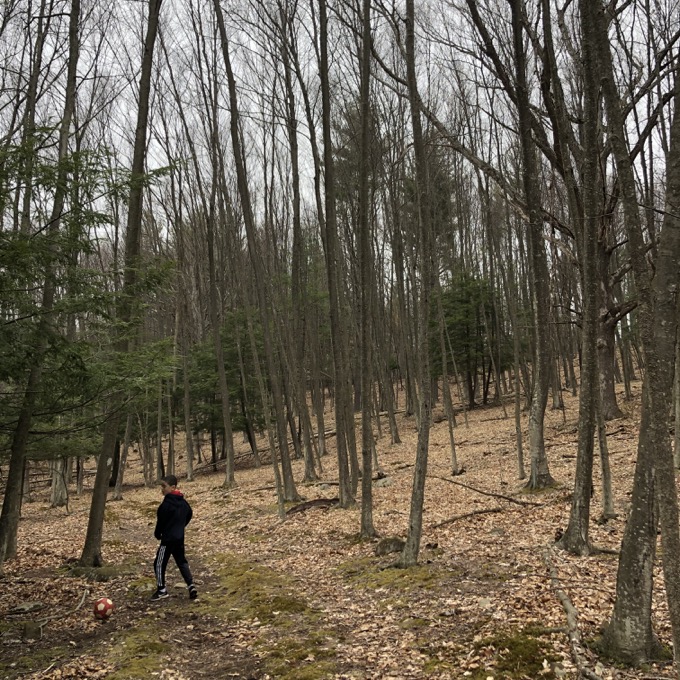 Calvin brought (one of) his soccer ball(s) because that’s what he does. From the Mountain Road lot, a path is cut straight up the hill, past the old farm buildings and through the still-farmed fields.

At the top, there’s a loop around the field from which one can continue west and north to the Hawk Hill property and beyond. We went east; this is where the best view of Hartford is by the way. Here it is in late summer: 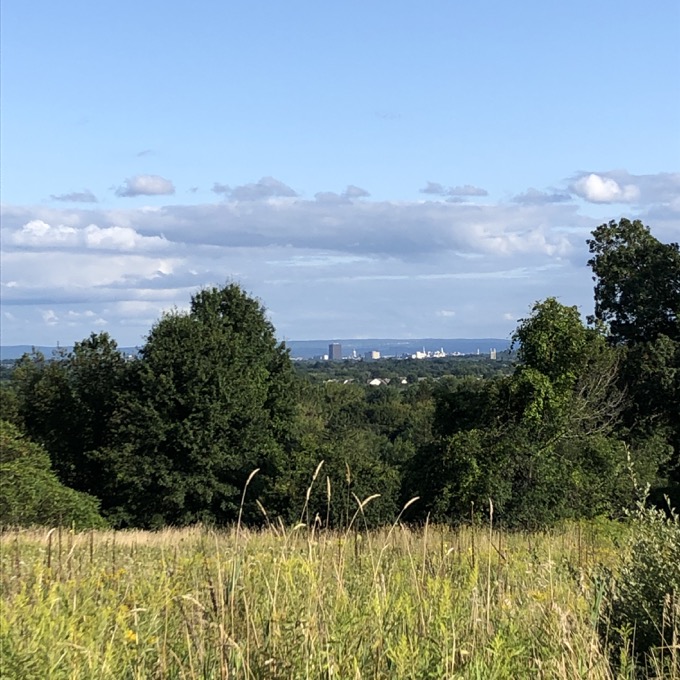 Lovely. From that spot, we took the path straight down the hill, east. (There’s an alternate trail that isn’t as steep.) As we made our way down, we heard crashing through the bramble… deer! And lots of ’em!) 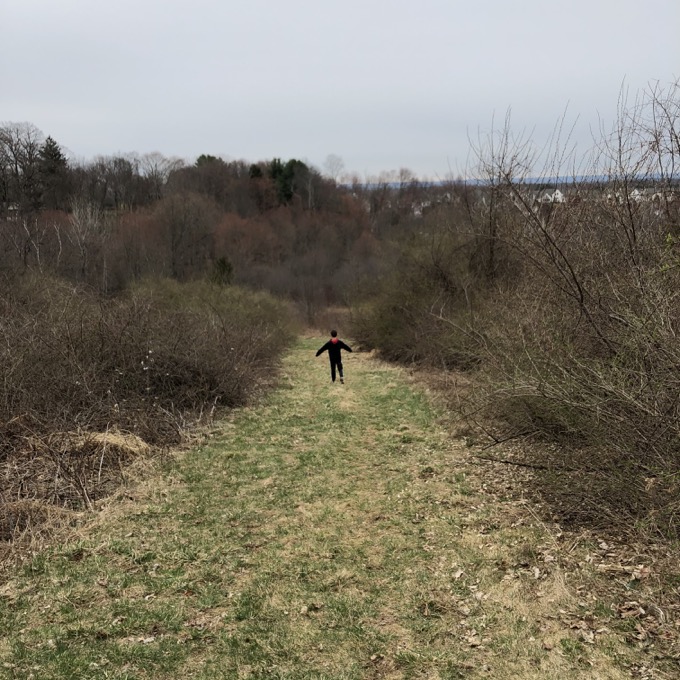 Just then, one, two, four deer leapt across the path into the woods on the other side. One seemed to leap over Calvin’s head, which was rather disconcerting. I almost got a picture of it too. Oddly, Calvin merely thought it was “really cool” rather than, “I almost got clocked by a deer on a muddy hill in Bloomfield during a pandemic.”

We continued to the pond at the bottom at which point the trail veers north between the pond and the new construction on Anthony’s Way. All maps show a loop here. All maps are (currently, in 2020,) incorrect. 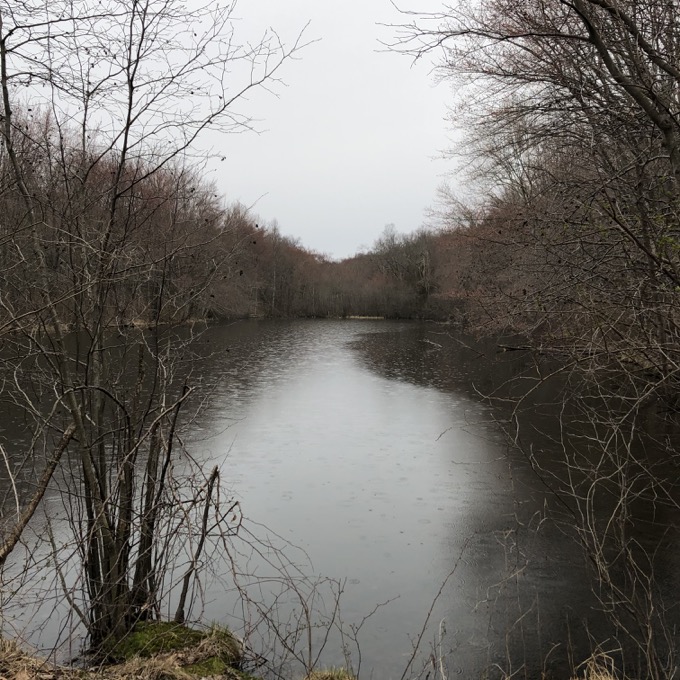 The path along the pond is blazed and well-defined – just very muddy when wet. At the northern end, it does begin to loop around through very old woods. There’s a number of massive white oaks here, protected by the Filleys and Pinneys and La Salettes I suppose across the centuries.

Once the trail began heading south again to complete the loop, now closer to the new construction, it completely disappeared. We found the last blaze and then… nothing. Not even a hint of a human trail (plenty of deer trails though). Hm. 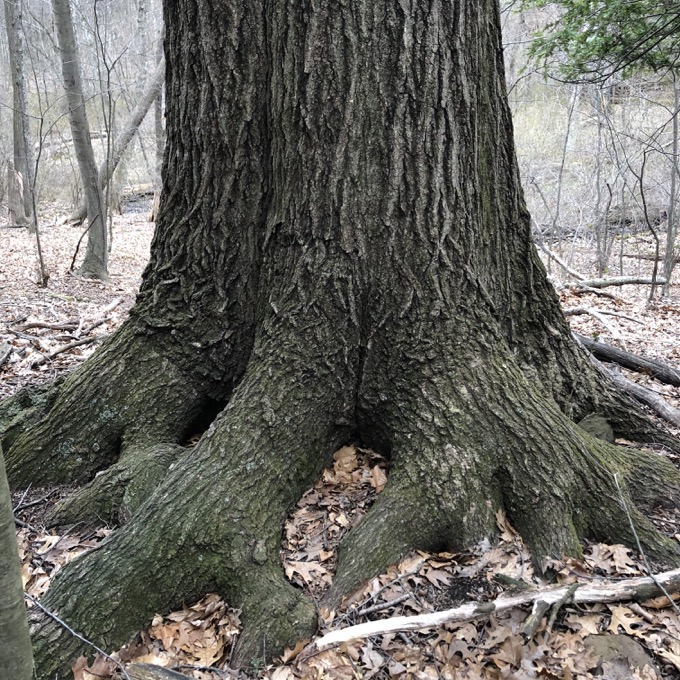 My thought is that the loop used to take hikers through what is now the backyards of the new houses. When the full LaSalette Trail is completed across Bloomfield, I’m guessing it will connect with the northern curl of this “loop” and continue along the pond. As for us, we bumbled around for while, and Calvin got some good dribbling practice in through the pine stand and bramble. 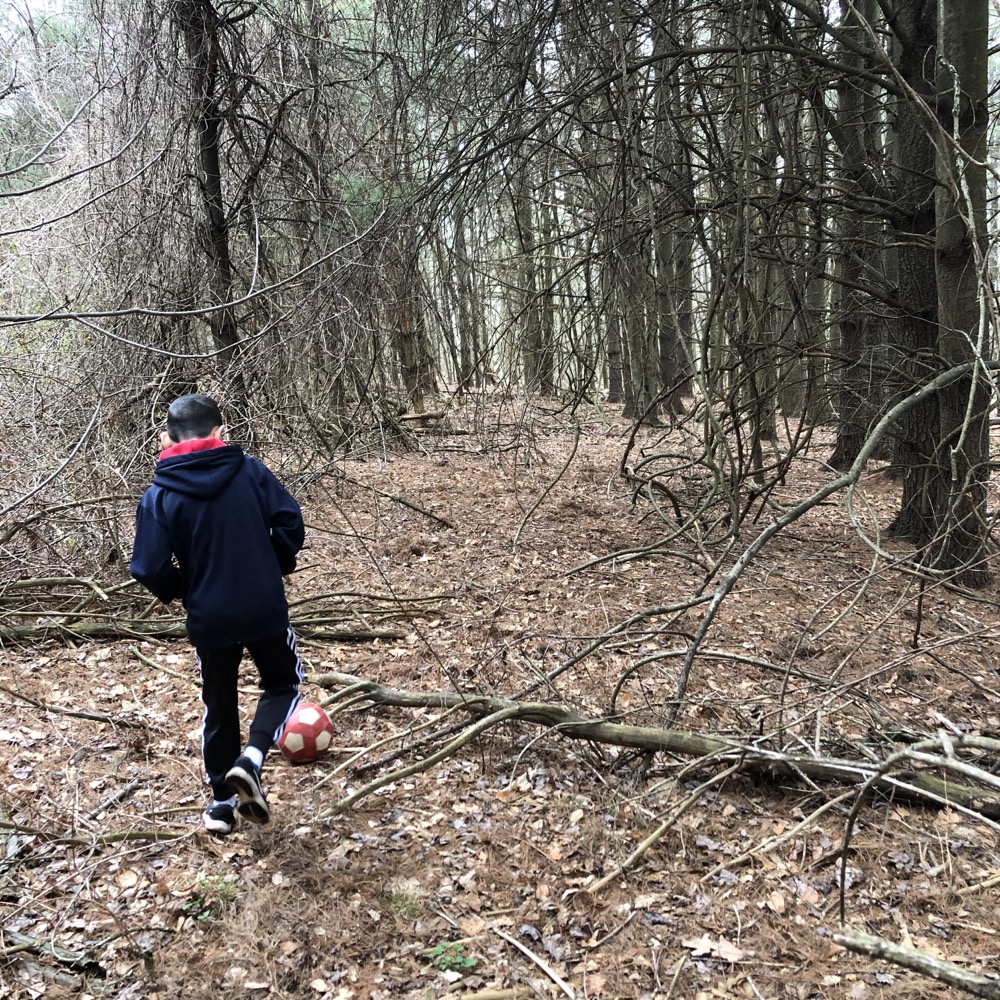 That pine stand is impressively thick and dark and it would be a shame to not have a trail through it. We’ll see what the future holds… We paralleled the muddy wet pondside trail below us and eventually came upon what was the beginning of the loop near the beginning of it.

Yeah, clearly it existed and then was removed in deference to the development. Whatever, we made our own loop and it worked out fine. 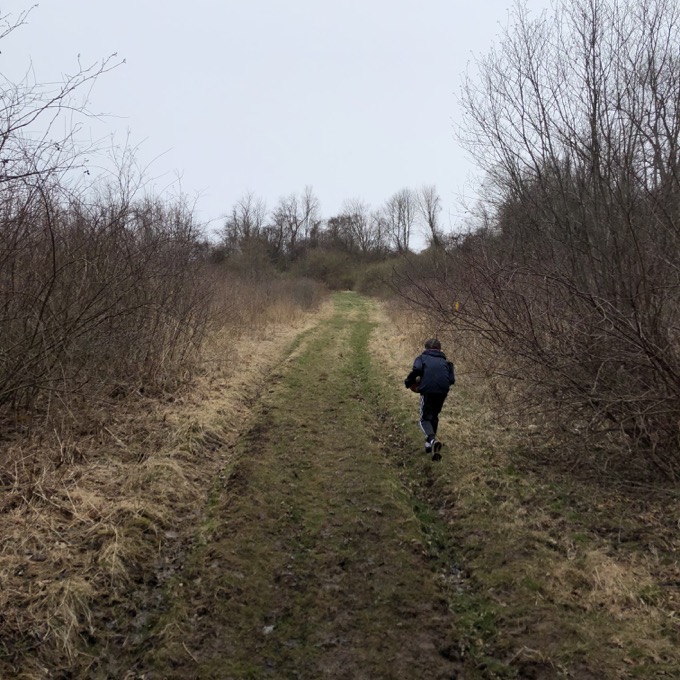 Back up the hill – again, taking the steep option because we’re dumb, to the top and the view of Hartford. As I mentioned, there is a path around that field at the top of the hill that is “officially” part of the LaSalette property, and there’s not much to it other than the same view of Hartford across the field.

I understand that no one really hikes this property like this and that most, perhaps, combine it with some Hawk Hill exploration. But since this is CTMQ and I feel the need to do things a certain way, this is what you get. 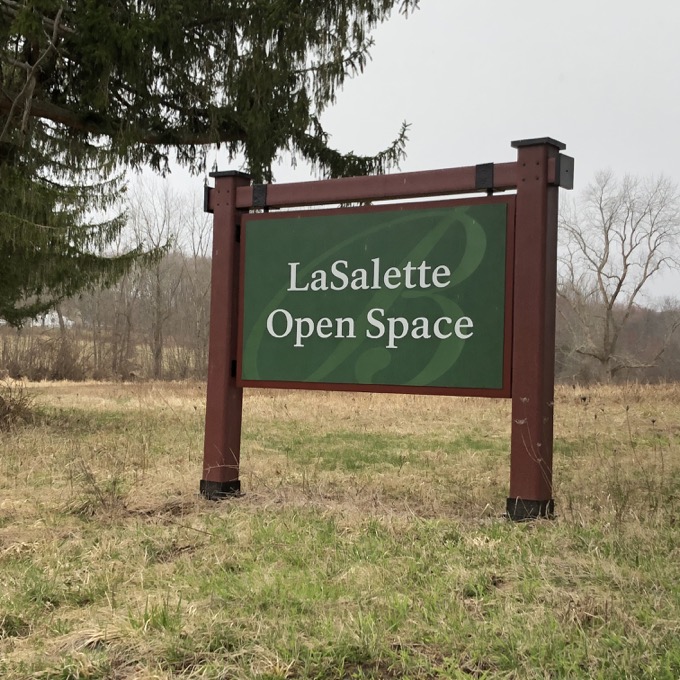