CTMQ > Everything Else > Religious > Our Lady of Hartford Shrine

Wha-Wha-Waaaawarme?
Our Lady of Hartford Shrine
May 29, 2010 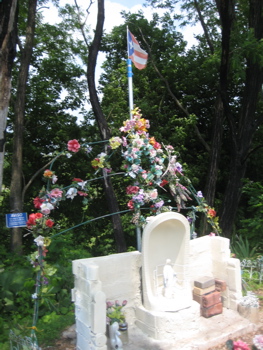 What is wrong with people? I mean, seriously. The true story of this thing is so absurd it just blows my mind that people buy into this stuff. I have known about Our Lady of Hartford – because the Virgin Mary has an affinity for Colt Meadows – for quite some time now, as this shrine dates back 11 years to 1999. I’m not going to write much of this page, as others have done a far better and more thorough job than I have the patience for, so here are my quick thoughts.

After checking out a Friends of Vintage Base Ball game down in Coltsville (National Historic Landmark!) and poking around Armsmear and Samuel Colt’s statue and all that good, historical stuff, I decided to circumnavigate the park to see the shrine. The mere fact that it still exists is a bit of a miracle, as the city once tried to get rid of the thing. That’s not to say it’s the least bit nice though – it’s not. It’s rubbish.

Some food vendors looked at me as I kicked up the dust around the three-pronged shrine across from the Hartford Courant. I was all alone among the fake flowers and bargain basement shrinery. I looked up into the black locust tree where the deluded said Mary appears in flowing robes with wings and she flies and glows and wears a crown and makes the tree shake and all sorts of stuff like that.

Back then a guy named Juan Ramon Gordils was apparently bored in the middle of the night and made up this whole story about how he had a vision and then he went to this spot and saw Mary up in the tree. Racoon, Virgin Mary, Leprechaun in Alabama, eh, who can tell. 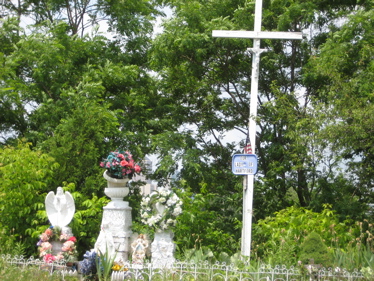 Despite the fact this guy was a crackpot who had been in trouble with the city before for lying about some insurance claim, the faithful got wind of Mary’s new hangout and started to congregate. In DROVES, which is the craziest part. One woman interviewed by the Courant at the time said, “It’s a symbol of God being here, of good things coming. Of good luck to the world.” Shortly thereafter, George Bush was selected president, 9/11 happened, we started war with Iraq on false information and then our economy suffered the worst collapse since the Great Depression. Not to mention Hurricane Katrina, that Tsunami in South Asia, the Haitian earthquake, on and on.

But yeah, some crazy dude “saw” Mary in a tree in Hartford, CT.

I urge anyone reading this page to read the full report from the New England Skeptics Society. It’s is thorough, informative and very interesting. I feel compelled to grab a blurb from them though, just because it’s so telling when it comes to this stuff:

To their credit, the Catholic church has a long and detailed process that a claimant must go through before they will give their stamp of approval on any paranormal phenomenon. Gordils’ site happens to fall in the parish of the Rev. Michael Galasso, pastor of St. Peter’s Church on Main Street. The 54 year old priest was suspicious of Gordils from the first time he met him. In an interview with the NESS, Rev. Galasso revealed many troubling things about the alleged visionary.

Gordils had made the claim repeatedly that a chapel used to stand some 50 years ago on the site where the locust tree now stands.
“Ridiculous. Of course not. That land used to be owned by the Colt family and they had an extensive dyke system installed there to supply their large garden with water. St. Peters has been here a 140 years, and was the only chapel in the area at that time,” reports Galasso.

Rev Galasso also informed the NESS that the exact same claim, a phantom chapel, was made by Gordils at the time of his Meriden vision in `92. He claimed that a half century earlier a chapel had stood in what was then his backyard. Such claims are so easily checked by a simple glance at the town land records, one wonders what Gordils could be thinking when he makes such obviously false statements. Perhaps he’s thinking that many of the pilgrims he draws to his alleged sightings will not bother to look at land records, being too preoccupied straining to see his visions. 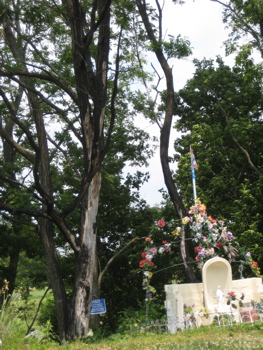 Further, the Reverend told the NESS that Gordils had been telling people that he had given him $1000.00 to come to the site and bless it.
“He did no such thing, but when you’re asking people for money, they’re going to start asking you what you’re doing with it,” said Galasso. Gordils had been requesting donations to rebuild the phantom chapel on the spot. In a previous interview with the Hartford Courant Galasso said the following:

“I’m just afraid a lot of good people will be hurt by this. Everybody’s got an angle. Now he wants to build a church there and he’ll be asking people for money.”

The priest said he declined Gordils’ invitation to visit the alleged apparition site because “my presence would only lend credence to his claims.”(Renner, 1999) It is interesting to note here, that when a reporter from the paper asked the simple question of the pilgrims as to how people could know whether or not the claim was a hoax he was met with hostility and told that it was Satan who was asking that question.

The NESS Report
Hartford Courant article about the shrine