Summer 2010 Update: The house has re-opened! This is the very rare Zombie Museum here on CTMQ; one that rose from the dead. And in fact, I’m writing this sentence in 2020 and can report that it is still open. I will, of course, revisit and re-do this page, but since I like my 2007 title so much, I’m leaving this stuff for historical reasons.

It looks like we missed the boat on this one… the Pardee-Morris house is closed indefinitely for a reason that I fear a lot of these places I’m visiting will close before I’m 50. (That’s just over 15 years from this writing.) RobC and I made a point to get over to New Haven’s Morris Cove section to see this historic house just to at least say we were there. Well… we were there. 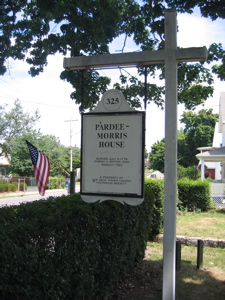 I don’t know anything other than a few token facts about this place, so instead of pretending otherwise, I’m simply going to cut and paste an entire New Haven Register article (conveniently printed less than a month ago) which serves as a cautionary tale about these important old properties.

We’ve got a special place, and it’s slowly dying
by Randall Beach

William Hosley was clearly frustrated as he opened the locked door to the Pardee-Morris House, a long-neglected historic gem in New Haven’s Morris Cove neighborhood.

Hosley is executive director of the New Haven Museum & Historical Society, which owns the spacious house (6,000 square feet). He wants the doors to this building to be open daily, available to new generations of school kids and to all ages, including those old enough to remember going there when it was a museum (1920-2000).

“I know it’s possible,” Hosley said of his hope to restore the house as a multiservice resource center. “It’s just money.”

Renovating the house could revive the area, too. I’ve previously written about people wanting to restore the Five Mile Point Lighthouse at Lighthouse Point Park. Fort Nathan Hale is nearby, as well.

“This house is the gateway to it all,” Hosley said. “There’s a summer, America good time feeling about this whole area.”

Pardee-Morris was built circa 1670 by the Morrises, but was burned by British troops July 5, 1779, when they invaded New Haven. Capt. Amos Morris rebuilt it a year later, recycling materials from the original structure. In 1915 it was bought and restored by William Pardee.

When Pardee bequeathed the house to the historical society in 1918, he envisioned that the premises would be used “as a center of the civic life of the neighborhood … appropriate to encourage the art and practice of good citizenship.”

Hosley, too, spoke of the need for civic involvement as he took me through the house, now devoid of virtually all its furnishings (they’re in storage). He sees Pardee-Morris as “a symbol of negligence and abandonment” in a modern era where the public is “saturated with entertainment.”

Our culture, he noted, is “homogenized,” lacking interest in special places such as this.

This was my second tour of Pardee-Morris. Three years ago I was inside with Hosley’s predecessor, Peter Lamothe, who was appealing for public support.

Hosley has more passion and pizazz than Lamothe. Maybe that will make a difference in the society’s quest for funds.

The house seems beleaguered, waiting for a white knight. Its paint is peeling badly inside and outside. Some of its windows are broken. I noticed rat traps set up outside. It’s shameful that it has come to this.

The historical society was forced to close the house to the public in 2000 because the organization ran out of money, and volunteers to staff the building were no longer coming forward. (There you see that problem of civic involvement.) 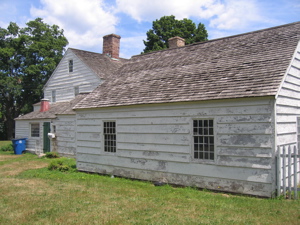 In 2004, unable to raise enough money to renovate the house, the society’s board of trustees voted to place the house in private hands through stewardship. The society would work with the group Historic New England to line up an owner who would be required to maintain its integrity. But it would not be open to the public.

Hosley said $1.6 million will be needed to fix up the house and establish new programs, including a digital resource center of historic photos, a reading room and perhaps a branch library. The grounds could be transformed into a community garden.

We walked into “the ballroom,” a large, wide expanse with many windows. “I love this room,” Hosley said. “It has spectacular potential as a public space.”

After we got back downstairs, Hosley, standing in a doorway laced with cobwebs, told me, “The state has poured millions and millions into sports and entertainment. Hartford alone received $150 million for cultural activities in the past 10 years. The Mark Twain House got about $8 million in funds for a visitors’ center that was a luxury, not a necessity. And yet this house, the most historic property of the Colonial era in New Haven, is dying.”

Hosley is awaiting news from state Sen. Martin M. Looney, D-New Haven, on efforts to include the house in the state bonding package. Looney told me Friday, “I think it has a pretty good chance, but there’s no guarantee.”

If Pardee-Morris doesn’t get those funds, Hosley said, “I can’t imagine what it’ll take” to save the old homestead. The rats will have won; they will be the only creatures that can get inside.

And if what Hosley calls “the steamrolling forces of homogenization” cause the house to be demolished, he predicts it will be replaced by “a cookie cutter, one-size-fits-all thing that has no connection with the community, no durability, no long-time appeal.”

Here I am, 2020 Steve again. I’m now friends with Bill Hosley and can only assume it was he who spearheaded the re-opening of the House as a museum and public space. 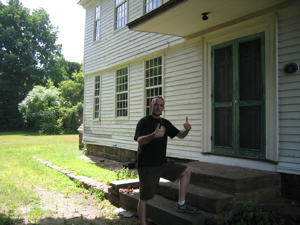