As far as America goes, Connecticut is pretty old. This has its plusses (history out the wazoo!) and its minuses (industry has flown the coop). However, here and there around the state, some old businesses still exist. Still doing what they’ve always done – surviving history and industry! 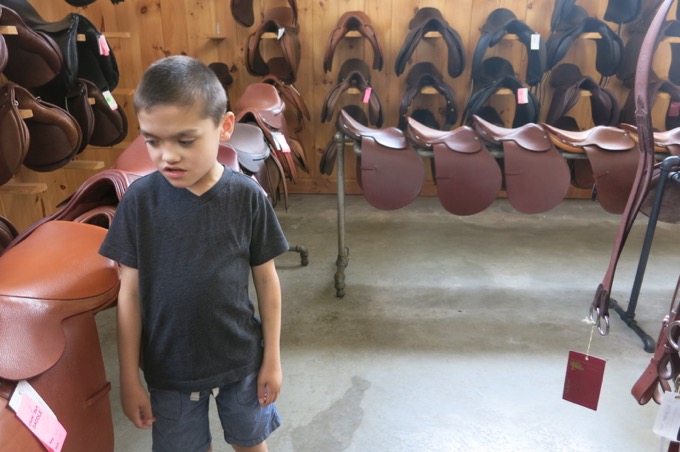 And one in particular, the Smith-Worthington Saddlery in Hartford, is a special case.

Smith-Worthington is “almost certainly the oldest surviving saddle manufacturer in the United States,” said James Hutchins, supervisor of the division of armed forces history in the Smithsonian’s National Museum of American History.

“They’re probably, I think, certainly one of the oldest manufacturing concerns of any kind in the United States,” he said. 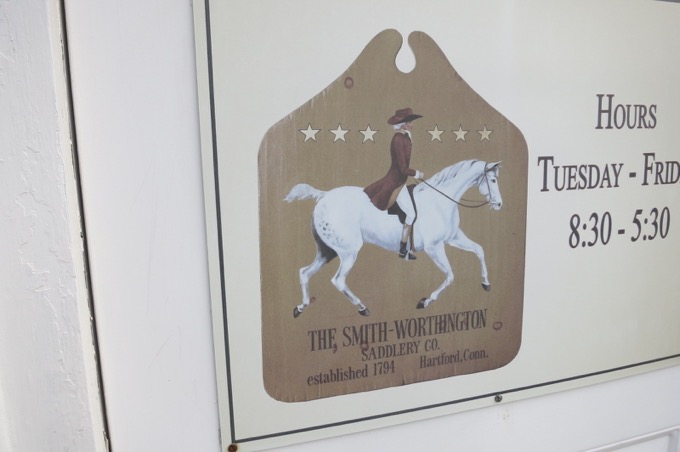 A visit has been on my radar for years, but I’d just never gotten around to it. I wasn’t sure what to expect, so I figured I’d drag my son along with me. I don’t know why I thought that would make my visit seem more normal, but that’s what I did.

I didn’t really expect to find a vibrant, clean, and fairly large showroom of saddles and tack. (“Tack,” I’ve learned, is horse talk for “horse stuff.”) Fortunately, some horse family was there shopping for real and they commanded the attention of the staff while Damian and I did a few circuits around the aisles of chaps and crops and bits and saddles and whatnot. 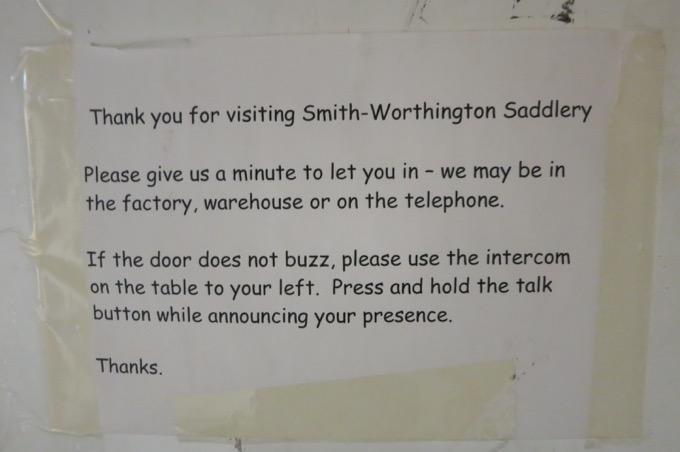 I am not a horse person. I’ve ridden on a horse once at a Boy Scout camp once, maybe 30 years ago or so. It wasn’t very fun. Furthermore, I was legitimately stalked by a woman I used to call “crazy horse girl.” I’ve found many horse women are obsessed with their horses… when they’re not obsessing over me and breaking into my apartment in Manchester in 1999. Ugh, that was awful. 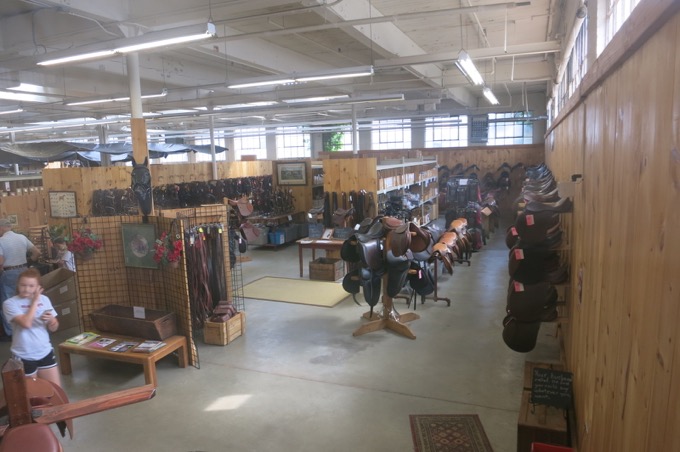 As a non-horse person, reading some comment boards about Smith-Worthington saddles was a wake-up call: I literally have no idea what this horse woman is talking about:

ALL their trees, even from the “budget” Mystic line, are adjustable. And they do it at their own factory in Hartford, CT, cheap and quick. They’ll flock them too

So there you go folks, you can get your trees flocked right there in Hartford. 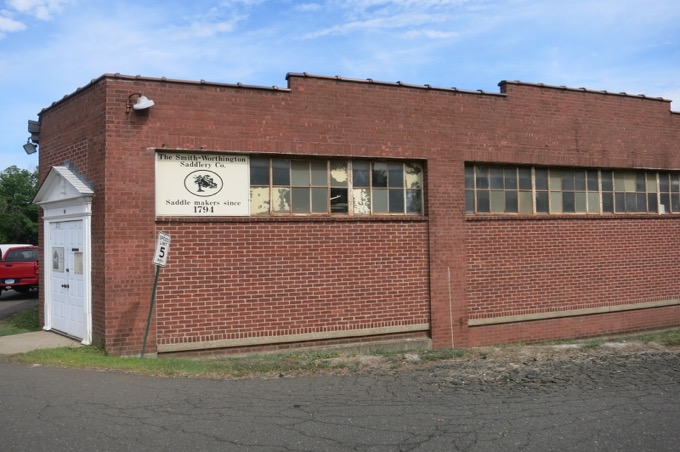 And while your trees are getting flocked, you can poke around this historic factory. A factory that (justifiably) boasts, “Crafting fine English saddlery and tack since George Washington was president.” And they’ve been in Hartford the entire time. Though some of their non-custom saddles are now made in England, the custom stuff is all done at the corner of Homestead and Woodland.

Smith-Worthington was started in 1794 by Normand Smith. He specialized in “ladies side-saddles” which was pretty groundbreaking in the late-18th century. 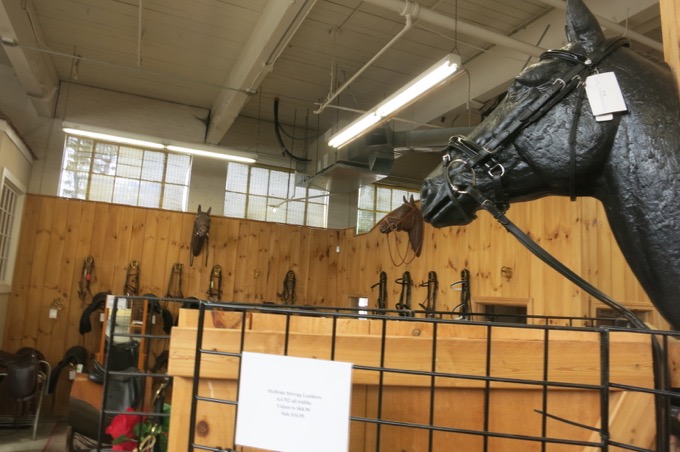 Over the last two centuries, Smith-Worthington has outfitted both the Union and Confederate armies, the Shah of Iran’s coterie, and Cuban revolutionaries in 1895. Business boomed during World War I when the factory made thousands of machine-gun harnesses, ammunition belts, saddles, and horse bridles.

They’ve always reveled in their custom work such as “oddball saddle prototypes, including a camel saddle and one for an elephant, along with harnesses for ostriches and seals.” (Lots of these tidbits come from Patrick Skahill and Connecticut Explored.) 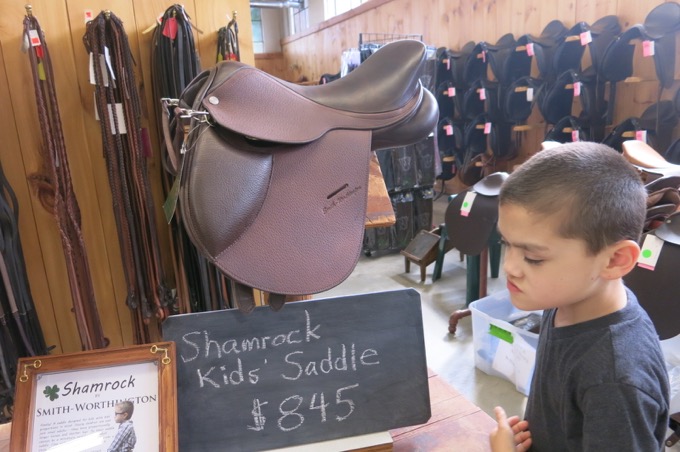 Antarctic explorer Richard E. Byrd used Smith-Worthington equipment to outfit his dogs during his expedition of 1928. NASA—through Connecticut-based Hamilton Standard—employed Smith-Worthington experts as leather-sewers on prototype space suits in the 1960s. The company’s master saddler and saddle foreman Nicholas Mitesser, who designed the aforementioned Shah Pahlavi’s saddles, also made saddles for entertainment icon Arthur Godfrey and President Theodore Roosevelt’s grandson, John Roosevelt. Yale University asked the company to produce a custom leather harness to hold an experimental pacemaker in place on a pig. Perhaps the strangest request came in 1991, when the US embassy in Abu Dhabi forwarded a request for camel shoes to be used in training events for the country’s multi-million-dollar camel races. 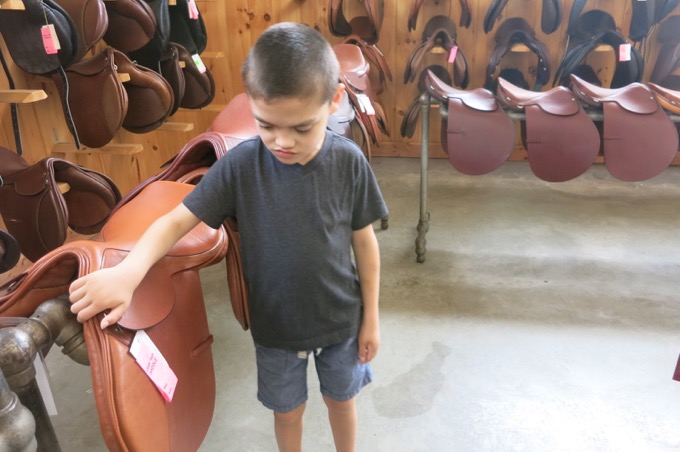 For our part, Damian and I walked around, told the helpful saleslady we were “just looking,” and then we left.