From Napoli to Bethel
291 Greenwood Ave, Bethel
16 Bucks I think

This restaurant closed in 2017.

I think we tried to get pizza here twice before over the years, only to find it closed. (Note: this is still only about 10% as frustrating as trying get pies at Pepe’s or Sally’s in New Haven.) Of course, the problem was with us, not the restaurant. 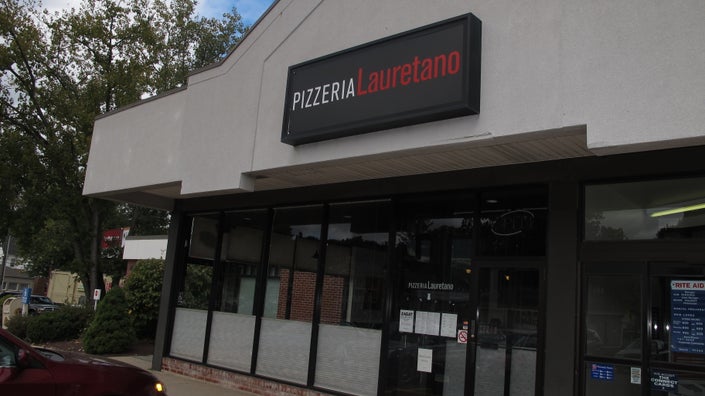 But I learned. And I planned a visit with Damian when I knew they’d be open and (thankfully) not too busy. After visiting with our friends Amy and Ryan, who seemed rather jealous of our lunch destination, we entered the restaurant and got ready for some pizza.

Pizzeria Laurentano is much classier than I thought it would be. I don’t know why I thought otherwise, as it is in Bethel after all. Our waitress was very nice and accommodating of Damian’s ways. If it were crowded, I’m not sure his army crawling down the long banquettes would have been so warmly greeted.

I got a beer. Damian got a NutriGrain bar. We placed our order and waited. While we wait, you can read the longest Roadfood review ever – probably because Michael Stern lived down the road from this place for a while.

A gracious restaurant that also is a gallery for local artists and a Sunday-night venue for jazz musicians, Pizzeria Lauretano has become my favorite place to eat near home. Good as its pizza is, I never can start a meal without tucking into a walnut cranberry salad. There is nothing particularly exotic about it – the walnut-cranberry combo has become commonplace on menus – but this salad is inspired. Its ingredients include crisp romaine and tender red lettuce, a few hoops of ultra-thin-sliced red onion, plenty of dried cranberries, and a generous spill of crumbled gorgonzola cheese. It is dressed with a little olive oil and enough lemon juice to make every bite citrus-bright. The dissimilar sweetness of the cranberries and onion are a fascinating duet, as is the richness of the cheese poised against the tang of lemon. And the one element that puts the whole package into the stratosphere is a scattering of meaty halved toasted walnuts. The depth of their earthy crunch is beguiling contrast to the way the fresh romaine breaks with slight tooth pressure. It all adds up to a fabulous medley of taste and texture … and fine prelude to one of Lauretano’s expertly-made brick-oven pizzas. 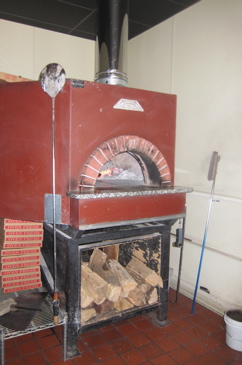 The single-size, single (large) serving pizzas are elegant and refined, and yet every bit as soulful as those from Connecticut’s funkier famous places. They are very thin-crusted, cooked in a dome-top, wood-fired oven that proprietor Michael Lauretano obtained in Naples. The crust’s chewy-brittle balance is exquisite, its flavor distinctive. The dough is made with flour also imported from Naples; and when it is baked, it puffs up along the edge so there may be a few spots that taste (quite deliciously) of carbon; but the whole thing is insinuated with fire because just before the pizza is ready to be pulled off the oven’s floor, the pizzaiolo slides his peel underneath and holds it directly over the smoldering wood pile for a few moments, giving it a smoky perfume. I love the plain garlic pizza – a less-is-more gilded flatbread; heaven for crust-lovers – as well as the mighty sausage and broccoli rabe white pizza; there are tradition-minded margheritas and puttanescas as well as occasional specials that include a flank steak pizza with chimichurri sauce and a multi-vegetable garden pizza during the fall harvest. 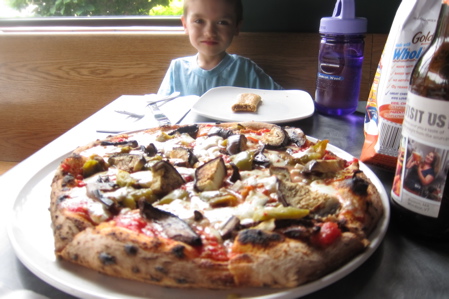 This picture cracks me up. Like all he got was a NutriGrain bar and was happy about it

I didn’t think a garlic pie would suit Damian’s tastes and the “multi-vegetable garden pizza” he extols wasn’t available yet, so I chose the next closest thing: the Verdura.

That’s a red or white (we opted for red) pie with roasted eggplant, mushrooms, peppers, garlic, fresh mozzarella and EVOO. The pizzas here are small, but were perfectly suited for the us two clowns. I think the point here is that each diner eats his own pizza, I’m not sure. They were a little big for one, not big enough for two adults.

But what our pizza lacked for in size, it more than made up for in taste. We tore that thing up. It was delicious with just the right amount of everything. Even little Damian ate two-and-a-half pieces of it – eggplant and mushroom chunks included. 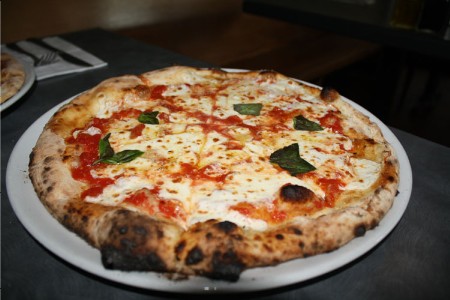 This is one of the places on the “Eat Before You Die” list that I’d have never gone to in a million years on my own. So for that, I thank the Sterns for their book.

My only regret was the sadness I saw on Hoang’s face when I told her about how delicious our pizza lunch was later that day – and for not having any to offer her. 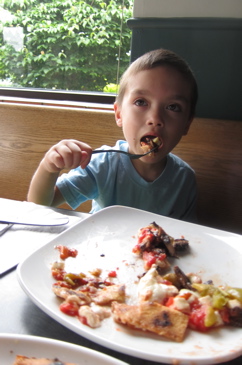 CTMQ Eats the Roadfood Eat Before You Die List