I’ll say it… This is not my favorite trail in Connecticut. Now that that’s out of the way, you ask, “Why?” Was it the fact that there were zero views? That dusk set in about halfway through? That my ankle was being gouged the whole way by my new trail shoes? That it was rather featureless and really quite “blah?” That I was pretty tired at the end of my loop hike with the Mattabesett Trail? 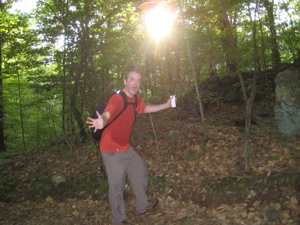 Or all of the above? How about… Where the heck was the “Lone Pine?” And that the Walk Book describes one cool feature along the way – an old burled hickory tree – that I never found despite my efforts. Whatever the reason… it just wasn’t the best hike I’ve done. But it does offer a nice loop option with a decent six mile section of the Mattabesett over Bluff Head and the Broomstick Ledges and so for that, it’s a worthy hike.

Well, there’s that and there’s the fact that we CFPA Blue Trails Challenge completists have to hike it regardless! As noted, I picked up the eastern trailhead in Madison’s Rockland Preserve after blasting through 6+ miles of the Mattabesett. I had done no prep reading for this hike, so I didn’t even know I’d find myself in such a place. 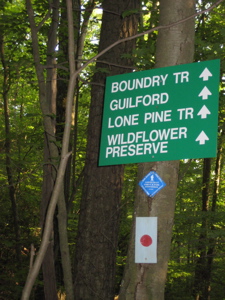 In December 1997 the citizens of Madison voted to purchase from the Madison Hills Limited Partnership II a 649 acre tract of land in North Madison then known as Braemore. The land, located in the Rockland Section of Madison, had been the focus of several attempts to create housing developments. None was successful due in part to the character of the land. The property lies within the watershed of the Hammonasset River that supplies the Hammonasset Reservoir of the South Central Regional Water Authority. The purchase price of the property was $4.8 million. 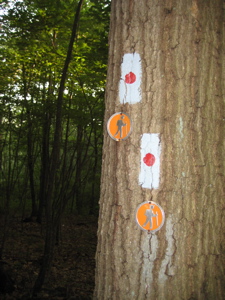 The centerpiece of the property is an area known as Coan Pond. A pond no more, it has become a fen; much like a bog with black, damp soil, thick grasses and shrubs. Crossword fans, we certainly know our fens from our aeries, now don’t we? Anyway, I didn’t see Coan Pond/fen as my time in the preserve was somewhat fleeting.

It’s a good thing that this land is preserved, for the parcel immediately south of it is currently being eaten up by bulldozers and graders. The Mattabesett through there has a tough go of it to be sure. 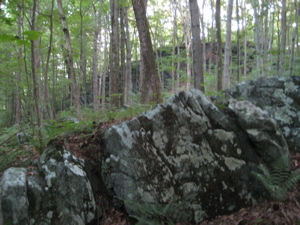 The first bit of the Lone Pine is shared with the Preserve’s Boundary Trail, marked by some cool metal things nailed into the trees for blazes. Rather old school if you ask me. I walked down an old woods road and then veered left to pass through some interesting geology. Perhaps we could rename this trail, “Lone Cool Geologic Feature Trail.” 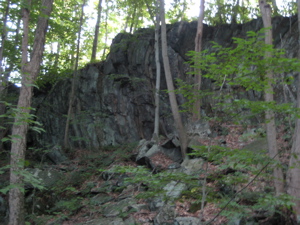 You can sort of see the bent layers of rock

There is a huge cliff in the middle of the woods with some serious striations, curving into sort of a wave. My picture is, as usual, horrible but I think you can see what I’m talking about. (This Rockland Preserve seems really nice and worth visiting on its own, so if you do, you’ll see this I’m sure.)

On the backside of the cliff (I think Rockland named it Silent Cliff) were a few more cool features. A jumble of rocks and one in particular forms a sort of a T-shape. Although the sun was nearly dipping behind Bluff Head at this point, with 3.5 miles to go, I poked around “Lunch Rocks” a little bit. (And once again my one non-blurry picture stinks.) 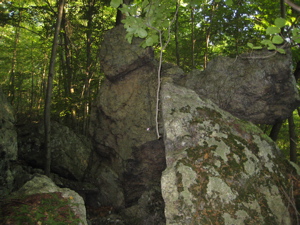 You can sort of see the T-shape

And that, friends, is pretty much that. The trail heads west in earnest and leaves the Preserve, passes through a boggy area with little footbridges and then traverses a wide expanse of what appears to be someone’s yard. The trail is marked by stakes in the ground with the blaze painted on the top… Pretty cool I guess. 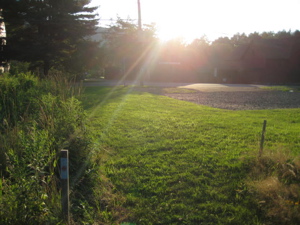 I was afforded a quick view of the eastern flank of Bluff Head before I crossed Route 77. Now that I was in a valley of sorts with a hill between myself and the western horizon, the lateness of the day really started to sink in. I can hike 10+ miles no problem, but starting at 4:45 when the sun sets just after 8 wasn’t my best decision. I figured there wasn’t much climbing so I’d easily maintain 3.25 miles per hour. 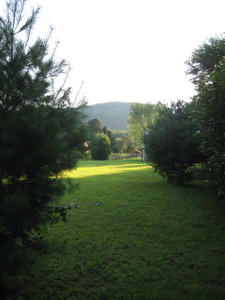 And I pretty much did, despite my painful ankle and the fact that this wasn’t as flat of a day as I’d thought. (There was also that 2/3 mile stretch from my car to and from that I sort of neglected to figure in…) But as I passed Myerhuber Pond and through all the private farmland not quite halfway done the Lone Pine, I started getting a little anxious about the pending darkness. 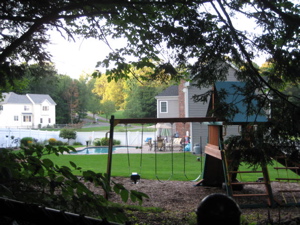 After the farms, the trail skirts the backyards of some new houses, each with a nice pool and jacuzzi and built-in hearths/grills. “Ah, it would be nice to to be chilling out there on that side of the fence instead of trudging along here, avoiding the horse crap on this side.” Indeed.

Unfortunately, the rest of my report will blow through the two western miles of the Lone Pine. There is an impeccably built bridge just past the development. Actually, I don’t want to make it sound like the houses and farms somehow take away from your Guilford hiking experience. They do not. 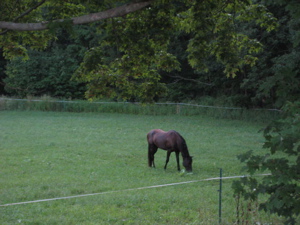 In fact, the farm actually gives this trail a unique aspect and it’s not an unpleasant one at all. This 4.1 mile trail traverses a total of four five Land Preserves! Rockland in Madison, but then the Braemore, Myerhuber, James Valley and Bluff Head Preserves in Guilford. So kudos to Guilford for protecting so much valuable land.

And kudos for the CT Walk Book for telling us stuff like, “Myerhuber Pond and Hemlock Brook are the only bodies of water in Guilford that drain to the north into the Coginchaug River.” Wow. That’s something. After crossing Hemlock Brook a second time, I looked for the “Buffalo Tree” as mentioned in the Walk Book. It’s supposedly an “old shagbark hickory tree with two burls that resemble bison.” Either I missed it in the fading light or it was the old shagbark hickory I saw on it’s side. 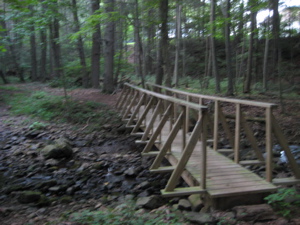 I didn’t have time to dawdle. Heck, here I was a long way from home and my wife was still expecting me to pick up take-out as is our Friday custom. Hungry, worried, AND probably a bit angry by the time I got home… pick up the pace! Gee, just in time to climb Totoket Mountain! Yay.

At this point I was a bit tired – okay, I was dog tired – and climbing up Totoket, although it barely even qualifies as a mountain in my book, was not fun. At least the trail was a wide ATV trail, so it was easy to follow. Once on top of the Totoket plateau, I came upon a TON of raspberries. I’m talking bushels of them… I positively killed me to fly right on by them. I think I shed a tear. 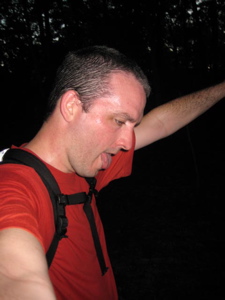 I finally linked back up with the Mattabesett Trail meaning I’d reached the end of the Lone Pine. I never did find THE Lone Pine though. You can use this trail and the many others in the various Preserves to spend a day hiking in south central Connecticut. The Mattabesett up on Bluff Head is a great place to hike, so whether you come from North Branford or Durham or Madison, I guess you can pretty much do what I did… just don’t start 3 hours before sunset. 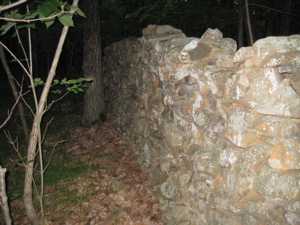 *My title comes from the wonderful Nirvana Unplugged album and that song (I know it’s not a Nirvana original) certainly evokes the feeling I felt on the latter half of this trail. Oh, and for the record, the last bit of hiking down to my car on the Mattabesett was an adventure – Now pretty much dark, I took several wrong turns and couldn’t find blazes even on the right trail. I finally got to my car around 8:25. And Hoang was cool about the whole thing, as we enjoyed our Enchiladas Oaxacanas from the phenomenal Monte Alban in Hartford. 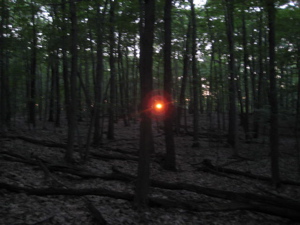