Life is about decisions. Decisions like, “Can I hike 10.6 miles after work in August?” Apparently, I told myself that I could. I neglected to factor in the 35 minute drive to the trailhead and that other pesky little fact – I’m 35 and not quite in the shape I used to be! The first six miles of my hike took me along the next section of the Mattabesett taking me into four towns – Durham, North Branford, Guilford, and Madison. (My return trip took me along the Lone Pine Trail and yes, it got pretty dark. 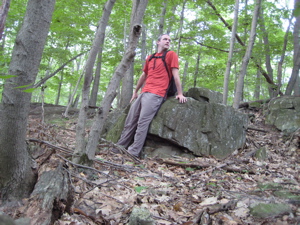 The first two towns were of no consequence (and only totaled maybe two-thirds of a mile), Guilford was great, and Madison gave me the Madison Blues. But we’ll get to that later. 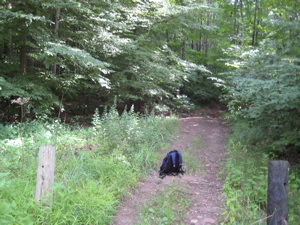 The exciting trail head off of Stagecoach Road!

I parked the car at the small little turnoff at the trailhead on Stagecoach Road. The trail ascends the rather (Connecticut) large plateau mountain called Totoket Mountain, crossing several ATV trails and other such confusing paths. Actually, it wasn’t confusing at the start at all as I could see the blazes I needed to follow. (It was the return trip during which this became a bit difficult to say the least.) 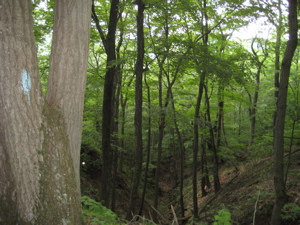 I attained the plateau fairly quickly, walking above some pretty impressive reentrants along the way. The plateau itself is very nice and expansive. It also, of course, allows for some nice, fast, flat hiking. The trail meanders in and out of a few different Guilford Land Trust properties which all seem to contain some colorful and uniquely blazed trails. Fluorescents of all sorts abound – which for some reason I found tacky even though I know that doesn’t make any sense. 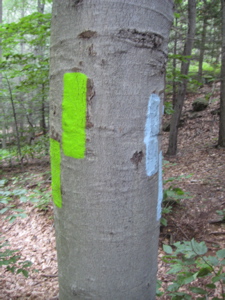 I stuck to my friend the blue blaze and approached the eastern summit of Totoket Mountain which is called Bluff Head. At 720 feet, this is the highest point in Guilford and is a very popular spot to hike. And now I know why – Bluff Head affords a grand panoramic view. 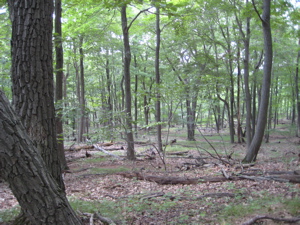 I could see Hartford 30 miles away. See, look: 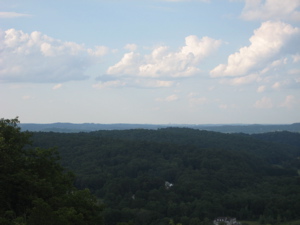 Hartford is there. Look closely.

Nice. There are several view points along the ridge and I was really very impressed. See here, in widescreen: 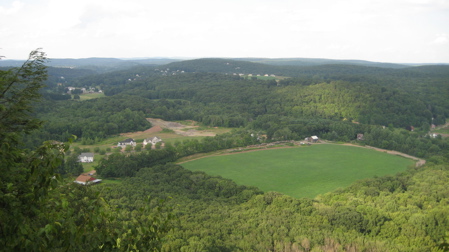 Behind the ridge were some nice grassy areas that would be great for a family picnic… or a teenage make-out session I guess. The hike from the west as I came is a little over three miles, but never very steep. The hike from the east off of Route 77 is much shorter – about half a mile – but wicked steep. You choose. Either way, you can see Long Island Sound: 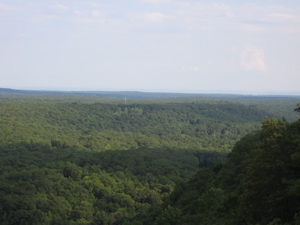 Before that harrowing descent, I took in the view of Myerhuber Pond. It is covered with either algae or lily pads or some horrible invasive species.

This pond was dug by a farmer named Conrad Myerhuber using a team of oxen. I’m guessing that was at least 100 years ago and I’m not guessing when I say that’s pretty impressive. Also impressive? My newfound knowledge of the local geology. 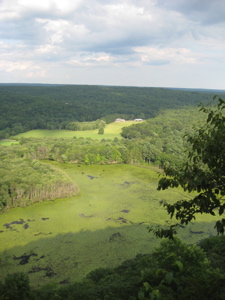 You see, After about a year and a half of section hiking and writing about the Metacomet and Mattabesett Trails, I’ve only had the chance to learn/write about the basalt traprock ridges that dominate the center of the state. I’ve provided many resources throughout my write-ups discussing these formations. Well, it’s time to leave them (for now) as I made my way through the last scree scramble down the eastern side of Bluff Head to Route 77. (It should be noted that there is an orange dot blazed wimp-out trail that contours around the straight down path. I, of course, stayed true to the Mattabesett.) 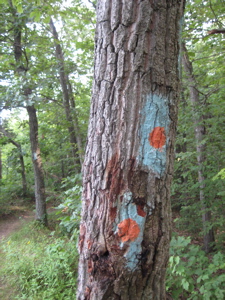 Why does it look like someone had their head bloodied on that tree?

It’s here that the Eastern Border Fault separates the state’s Eastern Highlands from its Central Valley. This fault forms the eastern edge of the Hartford Basin of Connecticut and Massachusetts, a large depression that formed within the roots of the Paleozoic Appalachian Mountains during the Triassic and Jurassic periods as North America separated from Europe and Africa, eventually forming the Atlantic Ocean. 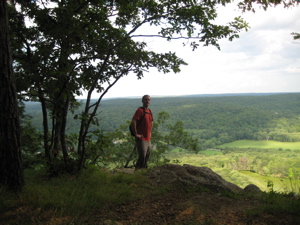 The trace of the fault and the contrasting types of rock found in the highlands and the valley are most easily seen in the vicinity of Bluff Head where the fault juxtaposes rocks that span more than 200 million years of Earth history. The massive exposure of the Jurassic Holyoke Basalt, with its typical trap rock structure, forms Bluff Head on the west side of Route 77. To the east, including the Broomstick Ledges parcel, coarse-grained Paleozoic schists and gneisses form the high ground. Pegmatite veins cut the Collins Hill Formation on this parcel forming prominent ledges characterized by coarse-grained mica, feldspar, and quartz. The geological history displayed here makes the land on both sides of Route 77 in the vicinity of Bluff head a particularly valuable cultural and educational resource. 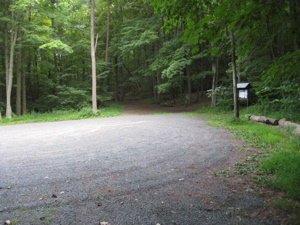 Agreed. It is very distinct and very noticeable – and very cool. Basically, to dumb it down for you, the rocks turn from brown to gray when you cross Route 77 going east. The blurb above mentioned something about the Broomstick Ledges. That’s the next area the trail passes through and while it’s really not all that exciting, it has a cool name and keeps the trail from being flat I guess. The Broomstick Ledges are sort of a poor man’s “Mile of Ledges” that can be hiked via the Tunxis Mainline Trail in Burlington. In fact, try as I did, I never got a representative picture of the Broomsticks. 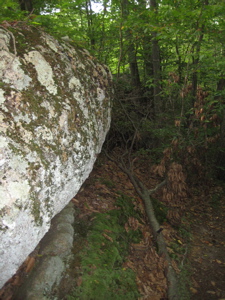 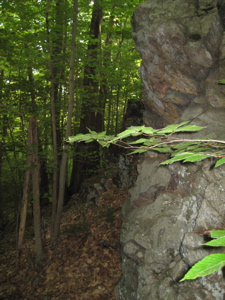 For me, being much more of a geography than a geology nerd, I was more excited for the point on the Mattabesett just past the Broomsticks… Can you guess what it is? 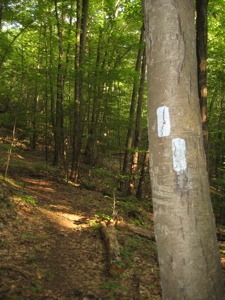 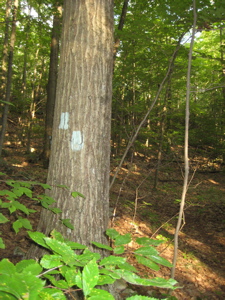 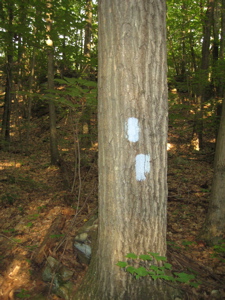 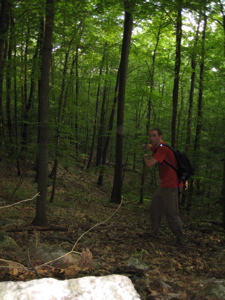 Me! Enjoying the southernmost blaze of the whole Mattabesett-Metacomet-Monadnock Trail system!

But you surely knew that from the pictures alone. I’ll have you know that I actually did think this was pretty cool at the time out there in the woods.

Update: See, back when I took the above series of pictures, there was no such thing as the Menunkatuck Trail, so this was a “thing” to me. Now? It’s even sillier.

That last sharp turn northward righted me on my way to the Mattabesett’s end along the Connecticut River in Middletown. It also signaled that I was nearing another town on my day’s hike: Madison.

Madison is a ritzy shoreline town with many multi-million dollar mansions. Unfortunately, the second the trail crossed into its northern woodlands, the trail immediately turned to junk. It appears this parcel will be gone soon; gone to the bulldozers and backhoes of progress. 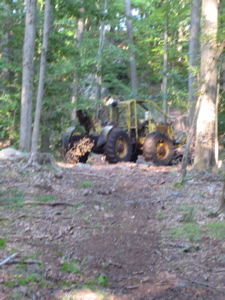 The trail itself barely survives this stretch, meandering among the crudely cut swaths of mud and orange flagged trees. I’m sure the giant houses that will be here soon will be lovely, and its not like this is exactly the finest natural wonder filled area in the state. But it still left me with an ugly feeling when the blue blazes must resort to temporary plywood sticks in the ground. 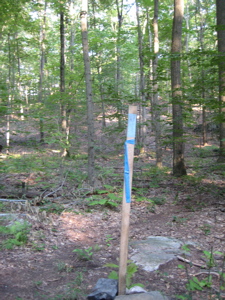 At least, as I neared the end of my Mattabesett section for the day, I crossed over into the Rockland Preserve. This 649-acre parcel will certainly be protected and that means the Mattabesett will survive through here, all the way up into Durham. The Preserve is full of trails and interpretive signs and looks like a nice place to visit. 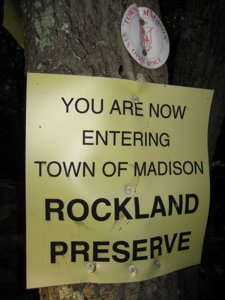 I didn’t really have time to dawdle, though, as the sun was now dipping below Bluff Head and I had over four and half miles to go to get back to my car. (That’s the Lone Pine hike mentioned earlier.) And so, despite the short developing area just over the Madison border, this is indeed a fun hike. And no, I’m not Bluff Heading.

Update: Looks like they only built a few houses and the Mattabesett was hardly affected. 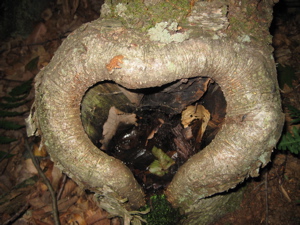