With winter finally behind us and some other business tended to, it certainly was time to get “out there” and start seeing our fine state again. As it was a Sunday and sunny, I had decided that our little family should go somewhere super fun and exciting to celebrate the impending warmth and beach days ahead. “Hoang… Damian… Who wants to go to this really cool and super fun place I know about today?” 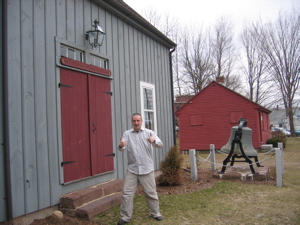 “We do! We do!” came the eager reply. In fact, since Hoang knew we were headed to East Hampton, she phoned our friend Becky to let her know we would be in her neck of the woods.

Off we drove, southeast down Route 2 – Hoang couldn’t contain herself; “Where are we going? Are there going to be toys for Damian?” I answered in the affirmative. There sure would be. I drove into East Hampton along Route 66, passing all sorts of businesses named after the bellmaking industry that left its mark here throughout the 1800’s. We saw Belltown Dentistry, Belltown Motors, Belltown Daycare. Why not just name this place Belltown already? Or maybe Chatham, since everything that wasn’t Belltown was Chatham something-or-other. Hmmm. 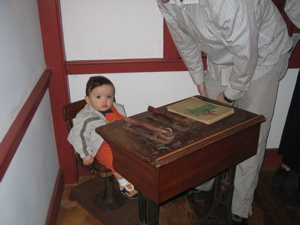 Lost in this thought, I was jolted by Hoang who again was asking where the heck we were going.

“Almost there, baby,” I said, “Almost there.” A short way off of the moderately busy Route 66 I pulled onto the lawn of a little nondescript building and checked the map. Hoang, knowing I never get lost, began getting suspicious.

“April Fools!” I yelled, “We’re here! The Chatham Historical Society and Old Chestnut Hill Schoolhouse!” Hahahaha, awesome! Hoang was not amused. Hey, at least Damian didn’t care. Begrudginly, Hoang unbuckled our child and off we went on another CTMQ adventure. 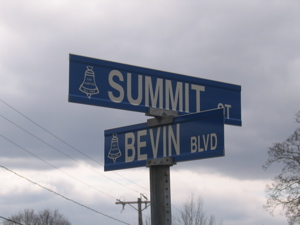 The one room museum was very small and very random. A few older ladies were milling about, sort of cleaning up the joint for the flood of visitors sure to come. Strangely, one kept fussing over the placement of a little baby buggy as if it mattered (trust me, it didn’t). Another implored us to sign the guestbook – which I noticed hadn’t been signed since March 4th. Ah yes… This little museum is only open on the first Sunday of each month – and for only two hours at that. So this place had to be special, right? Only open for 24 hours a year? We began to poke around. 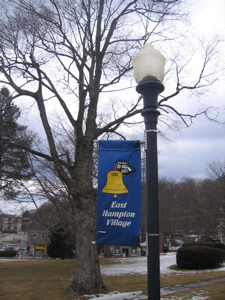 The museum does lack interperative displays, opting instead for random bits of historical items scattered about. I suppose one could say that there is a certain charm in that. As your intrepid reporter, however, I must say it makes it rather difficult to write about. There was a portrait of an old gentleman whose name I did not note. There were some old military uniforms, baby clothes, and fife and drum gear. There was an old sleigh with some attractive mannequins out for the “ride.”

There were trophies from who knows what, some old pencils, and photo albums. There was an old chair, some inkwells, and a small part of the old post office. 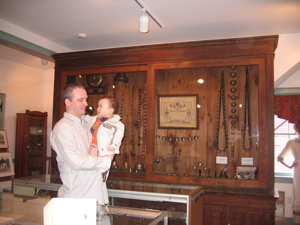 There was a bellmaking display that, well, didn’t really teach me anything about bellmaking. It was just a bunch of bells. The museum’s third visitor for the month arrived and lo! It was our friend – and East Hampton resident – Becky! She was excited to learn about her town and read over some old Governor Bill O’Neill political propaganda. But since the museum didn’t really tell me who O’Neill was, I was happy to have Becky there. 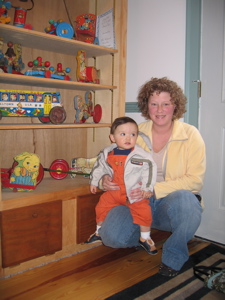 He became Connecticut’s Governor back in 1980 when Ella Grasso resigned for health reasons (later elected twice on purpose though). Being from East Hampton, this is apparently still a big deal to the burg. There is a “Gov. Bill O’Neill Way” and his “Governor’s Tavern” is still in business.

What else? Ah, there was a guestbook from the Lakehouse in which Mark Twain signed his name. There was no explanation of what the Lakehouse was, but again, that’s how they do it down at the Chatham Historical Society. Granted, probably 99% of their visitors are from town or perhaps one town over, so they know that East Hampton, Haddam, and other centrally located towns on the old rail line (now Air Line State Park) were summer resort communities back in the day. 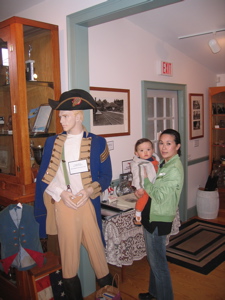 So why is it named “Chatham” if we were in East Hampton? Amazingly, the story goes deeper than I’d ever imagined… Chatham is only one of about five other town names that plague East Hampton to this very day. Pocotopaug, East Middletown, Cobalt, Middle Haddam, etc. Click here and you will be richly rewarded. 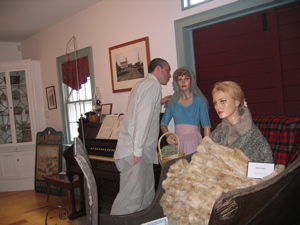 Fascinating, so what about the bells? Well, they had a few here at the museum, but an explanation of just why this is Belltown needed to be stolen from the same town website:

Bell making in the 1800s began ringing in East Hampton in1808 when William Barton (Barton Hill) opened the first bell factory intown. Barton had previously built guns for the Revolutionary War and had been trained in brass casting in New York. It is believed that Barton’s bell factory was the first factory developed solely for bell production. Barton’s contribution to the growth of bell production can be seen in his invention of the process in which bells were cast hollow instead of being put together separately, which had been done previously. Many bell makers in East Hampton were trained in Barton’s factory. Over 30 different bell manufacturers called East Hampton home over the years. Millions of bells have been made in East Hampton, with bells still being produced by Bevin Bells in town. 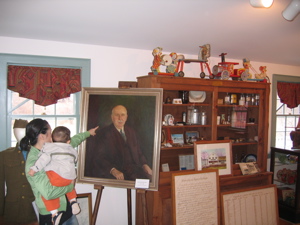 Bevin Bells traces their roots back to Pocotopaug Stream and William Barton as well. William and Abner Bevin learned the trade as apprentices to Barton. Joined later by brothers Chauncey and Philo Bevin, the family created the company of Bevin Brothers. The Bevins, along with numerous other bell manufacturers developed factories along Pocotopaug Stream which can still be seen today. Sleigh bells were the first to be produced by William Barton, but many different kinds of bells have been produced in East Hampton. The sounds of toy bells, call bells, tea bells, school bells, cowbells, door bells, and church bells could and can still be heard ringing around East Hampton. 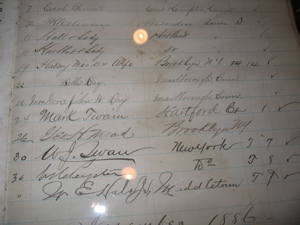 The only thing left were the toys I had promised Damian. He seemed to enjoy them and Becky, not being as familiar with him as we are, almost allowed him to rip one down and throw it across the room. Though I think we could have gotten away with it, as the older women were all rather hard of hearing. (This inability to hear hampered my ability to grill them as I’d usually do.) Oddly, as Becky pointed out, the toys were donated from someone from Mississippi. My goodness this was a quirky little place. 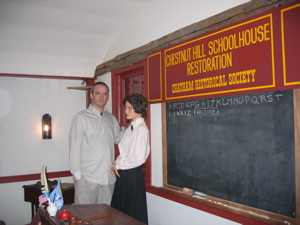 This was proven to us when one took us over to the one room Old Chestnut Hill Schoolhouse, just next door. I asked a few questions which she arbitrarily ignored. “Oh well,” I thought, “between my mumbling and her difficulty hearing, I’ll just make up the details from here.” 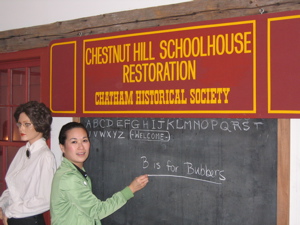 The schoolhouse was freezing, but pretty interesting. Only the foundation was original, and maybe a few timbers here and there. There was another attractive (in a school marm way) mannequin and some 18th and early 19th century furniture. As to be expected, there was also a bunch of random things strewn about, like ice skates and trouser clasps that Hoang never got an explanation for. We did learn, at least, that the teachers back in the day used to sleep in a little anteroom off the back of the schoolhouse. 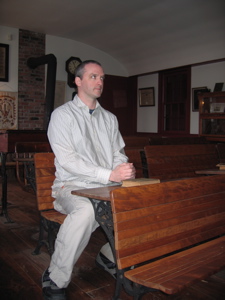 I wish I could tell you more about the history of East Hampton and it’s proud bellmaking past. I wish I had a funny story about how this place is only open for 2 hours every month from 2 until 4 and yet the lady who answers emails for the museum somehow sent me the following back in February and how, as a result, I’d driven down here a month ago only to find it closed up tight at 11 AM: 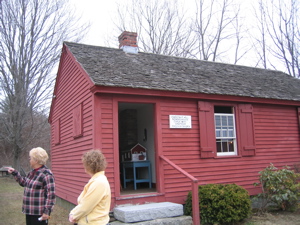 Hi Steve, the museum is open to the public the first Sunday of every month from 10-2. If you would like to schedule a group visit arrangements can be made with our Society President. Thanks for your interest and hope to see you soon.

Oh snap, that’s right, that actually did happen. Real funny, Carol L Morris, real funny. And so, with Carol’s joke on me, I passed the joke onto Becky and my family on this April Fools day. Ha. 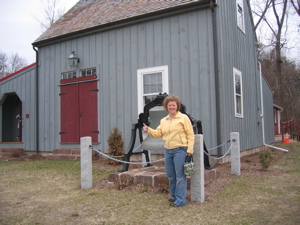