With approximately 50 billion Connecticut hikes to walk and write about, it’s not often I revisit trails. So now you must be thinking the West Stafford Conservation Area trails must be stupendous. 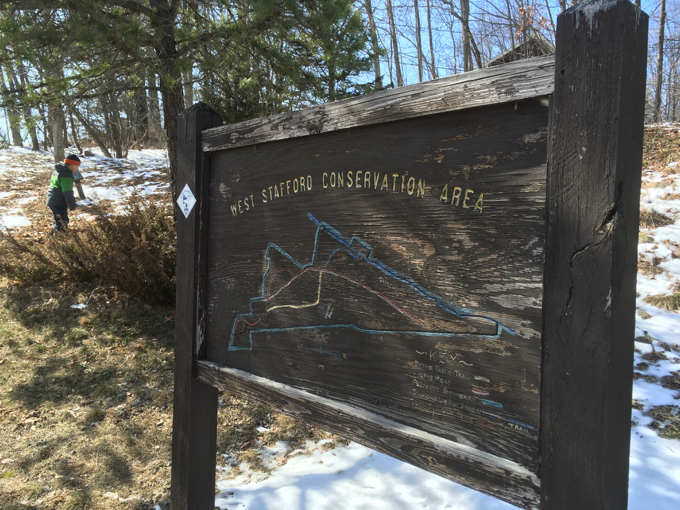 This is a nice property, but I really didn’t want to trek up there twice. Alas, my first attempt with Damian didn’t go so well. It was my fault though. I forgot that Stafford is almost in Canada and even though the crocuses were blooming and my wife was catching rays on the deck down south in West Hartford, there was still a decent amount of snow in the hinterlands of Stafford. 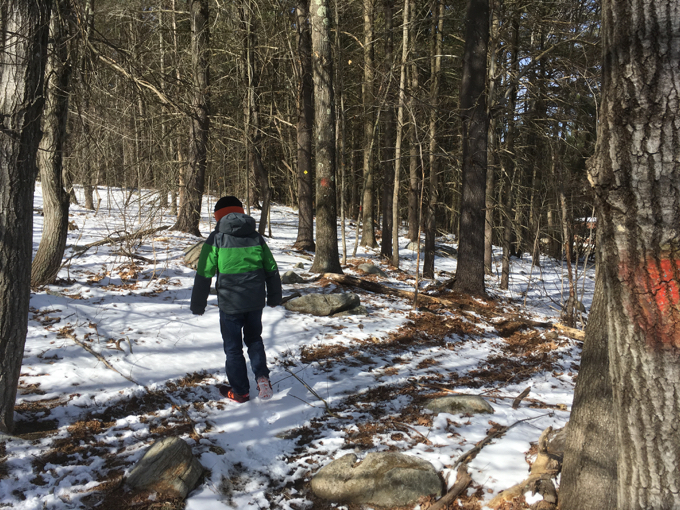 And Damian was wearing his little sneakers. And hates snow. And has very poor balance. And it was, I think, about 43-degrees colder up here than at home.

But we gave it a go; mostly because the Stafford Conservation Commission does not see the need to give us trail mileages anywhere on their not-to-scale hand-drawn maps. 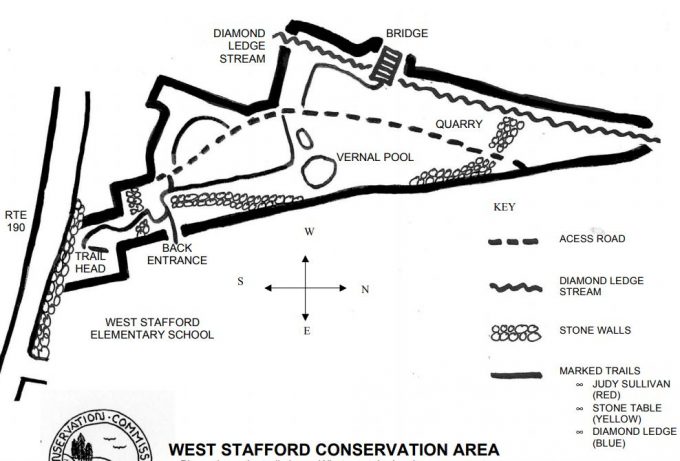 The SCC keeps it old school.

I truly had absolutely no clue how long this trail would be. As it turned out, it was longer than Damian would have liked. So after about ten or fifteen minute of slipping and shivering, we turned around and headed back to the car at West Stafford Elementary School.

The “hiker’s lot” is in the delivery area for the school, so you can only park there on weekends and when there’s no school activities. 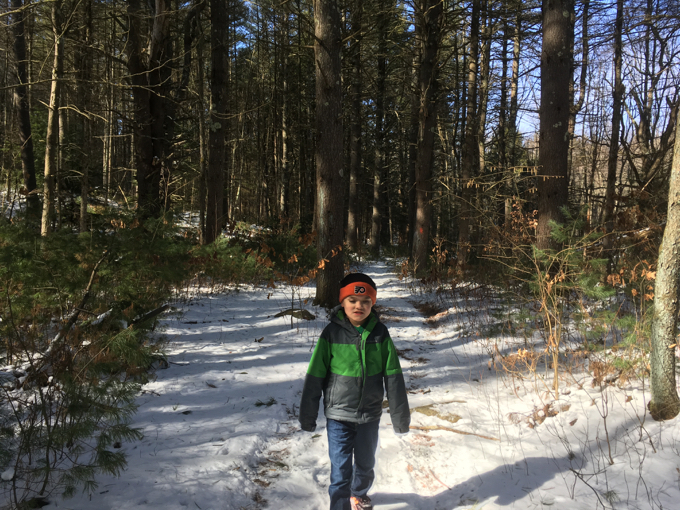 Damian and I returned to the West Stafford Conservation Area in July. Surprisingly, there was no more snow in Stafford. Phew. 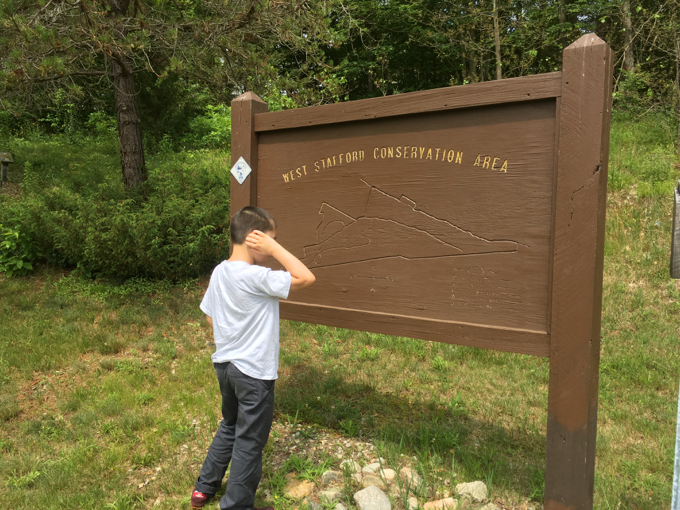 Perhaps confused as to why he was here again…

(But now it was humid and in the 90’s. Damian powered through despite a bee sting on his thigh that he never even mentioned to me until that night. It is extremely disconcerting to have a child with such a disturbingly high pain tolerance as part of his genetic syndrome.) 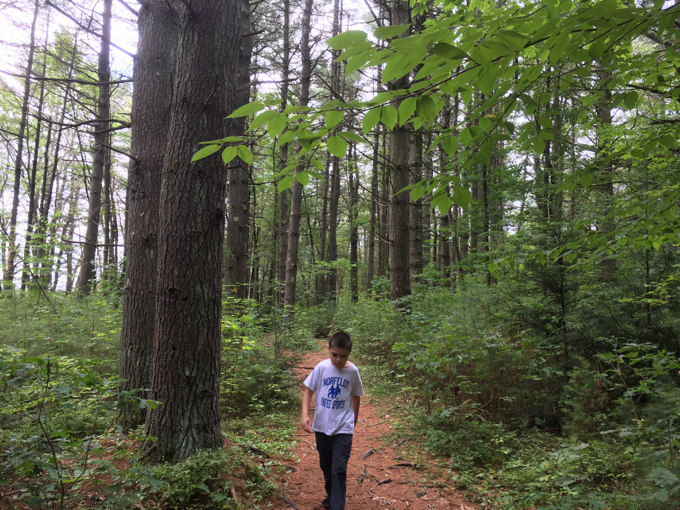 The first trail here is the Judy Sullivan Trail. Ms. Sullivan was a teacher at the school and she is responsible for the trail’s existence. Her trail is blazed red. 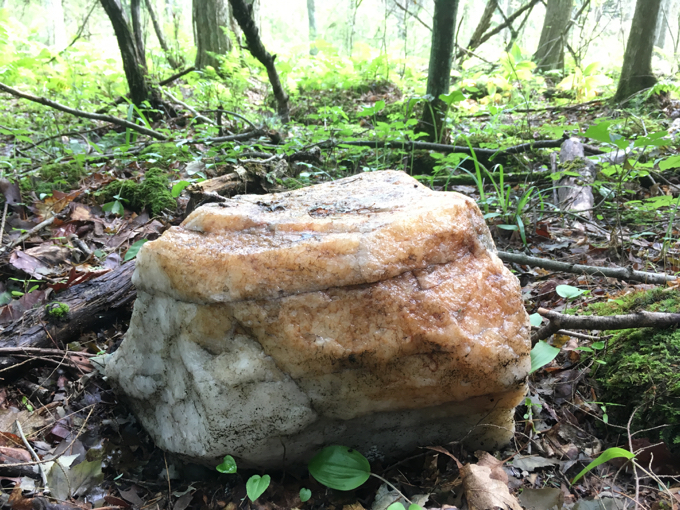 I’d guess it’s about .75 miles in length, but I don’t really know. Hiking with Damian throws off my usually accurate internal odometer. It’s mostly flat and has a few explanatory signs along the way.

There are some neat geologic features here, notably this rock which Damian just loved. 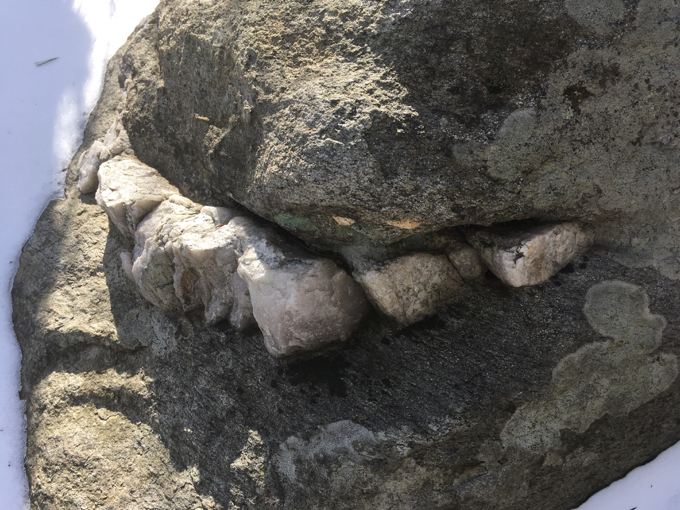 In fact, this trail leads to a hotbed of quarrying and rock collecting. It is officially closed now to digging, but in the past, the Diamond Ledge Quarry we were heading towards drew in collectors from all over New England. No, really, I swear. You’ll see.

Through the tall pines we’d seen before and to the Stone Table. 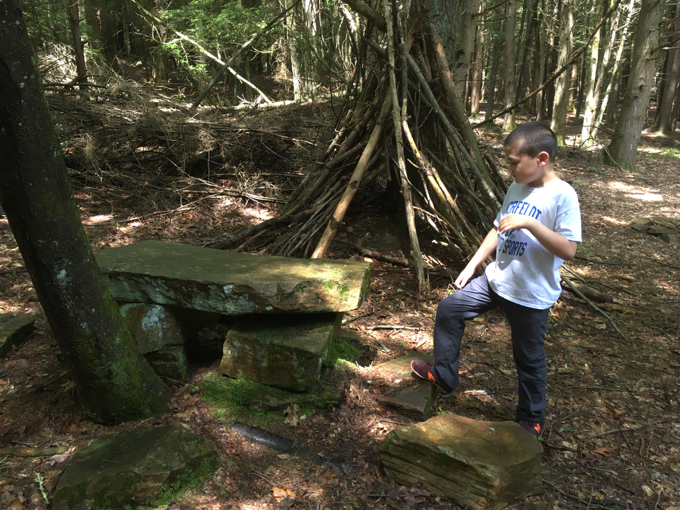 Yup. That’s the Stone Table. Okay. We continued up the Stone Table Trail which introduces some small hills. I should note that there are ATV trails in these woods, so try to be careful. 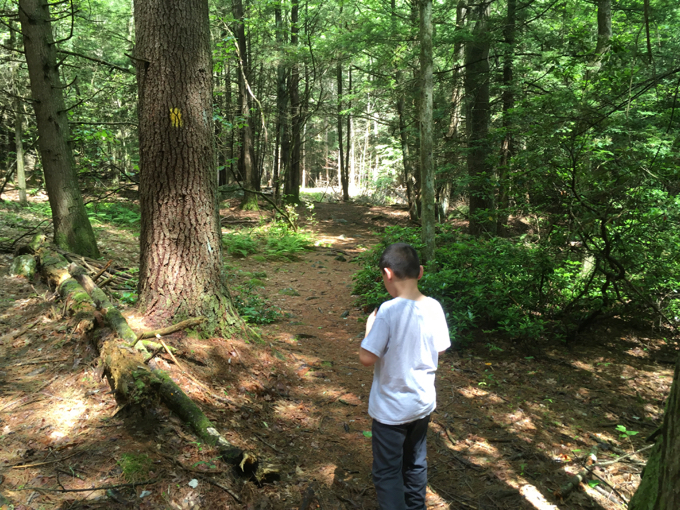 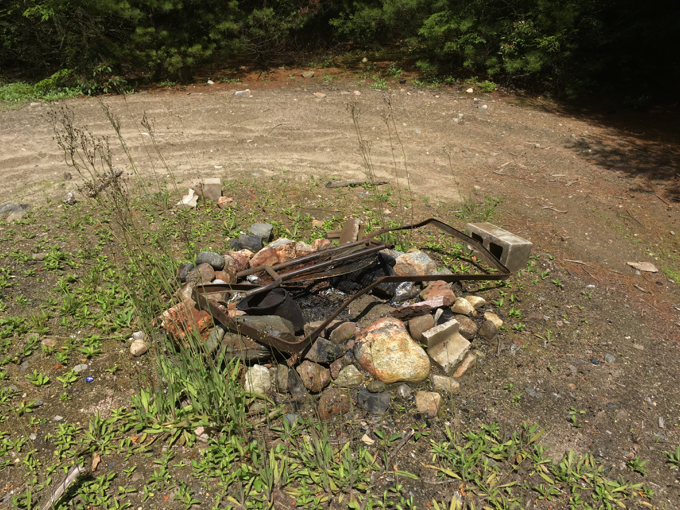 Turning around, I could see the steep exposed rockfaces that people have dug into over the decades. Sorry folks, despite the “diamond” in the name, there are no diamonds here. 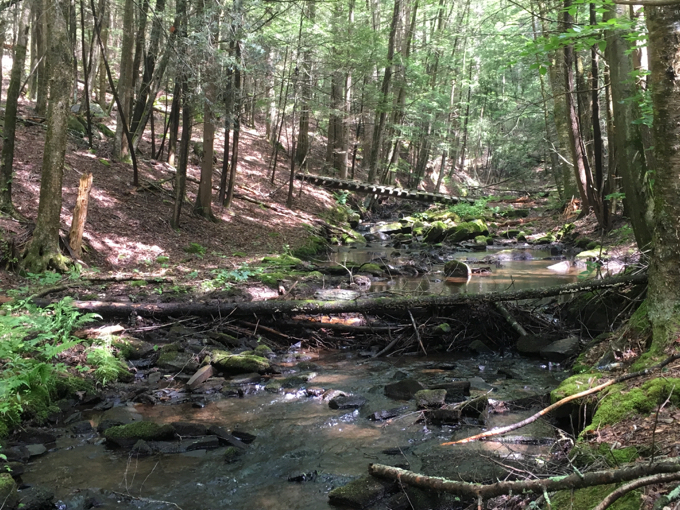 But what is here? We climbed back up the hill, back past the firepit, and then headed down towards the quarry. 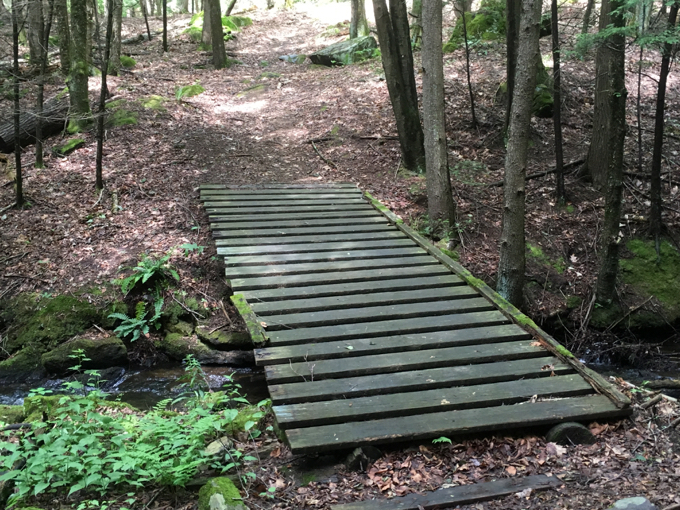 This area has been quarried for decades. A large granite ledge has a vein of crystal quartz running through it. I think commercial interests have taken the granite while hobbyists have ripped out a ton of the crystal quartz. 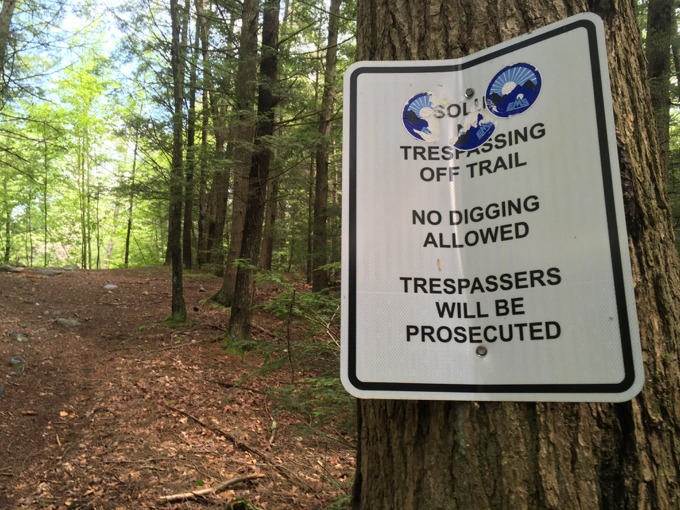 I’m not sure how long this link will work, as it’s a Google cache, but it explains what the allure is. They call it milky quartz.

For decades, New England mineral collectors have been drawn to Diamond Ledge in north central Connecticut in search of the excellent quality milky quartz crystal plates and clusters for which it is famous. Those who have worked the site with grit, determination, and back-breaking labor have regularly been rewarded with significant specimens. And, those lucky enough to find pockets have sometimes brought home several 5-gallon buckets filled with these highly aesthetic and desirable plates of large-size milky quartz crystals. This well-known, prolific locality is in Shenipsit State Forest, in West Stafford, Tolland Co., Connecticut. It is a wooded area, giving plenty of shade even on a hot summer day, and at the bottom of the steep slope where collectors dig for crystals is a stream with a waterfall and ample pools of water for rinsing mud off of specimens or taking a quick bath.

Totally not my thing, but whatever floats people’s boats. Here’s a piece of quartz found here: 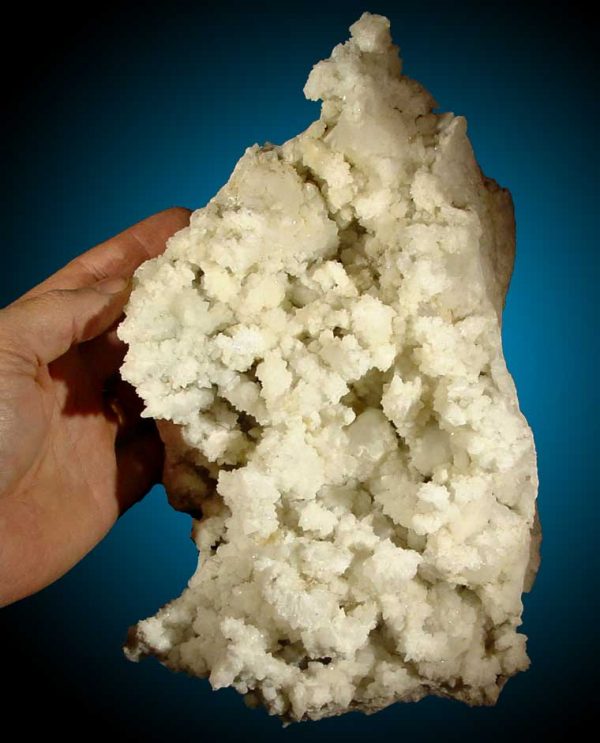 Quartz is a funny word

Digging here is now illegal, but I’m not sure how enforceable that rule is. There are a few signs, sure, but I’d guess people still go poking around. The Stafford Historical Society has a bunch of information about the quarry operations around town, including a display about the quartz seams in West Stafford. 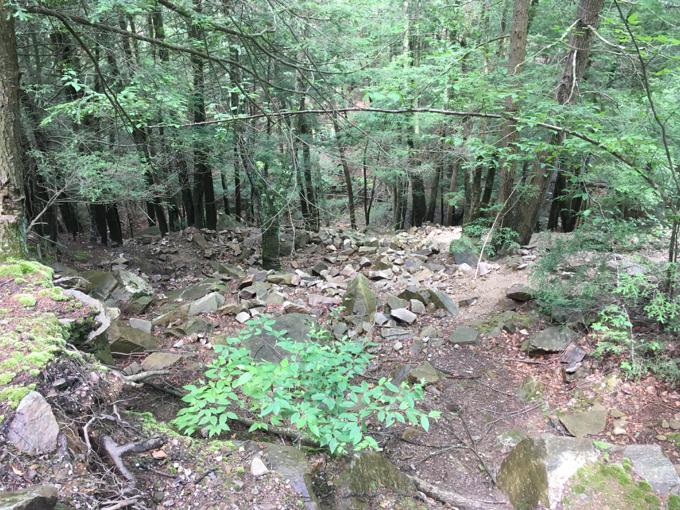 We didn’t find any milky or crystal quartz, nor did we look for any.

After the quarry area, we turned around and took the woods road back to the car. (That’s the dotted line on the map.) 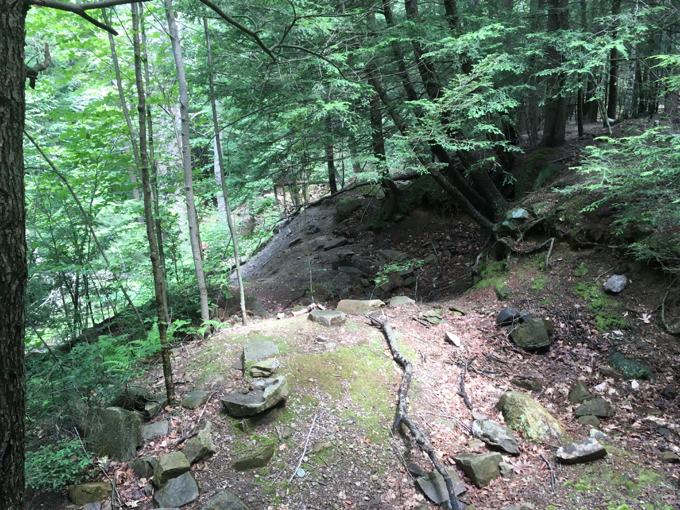 Top of the quarry

Nearing the end, Damian was really dragging. As I said, it was hot… really hot. It’s kind of funny that our two hikes of this little property were during fairly extreme weather conditions. Okay, that’s not really all that funny. 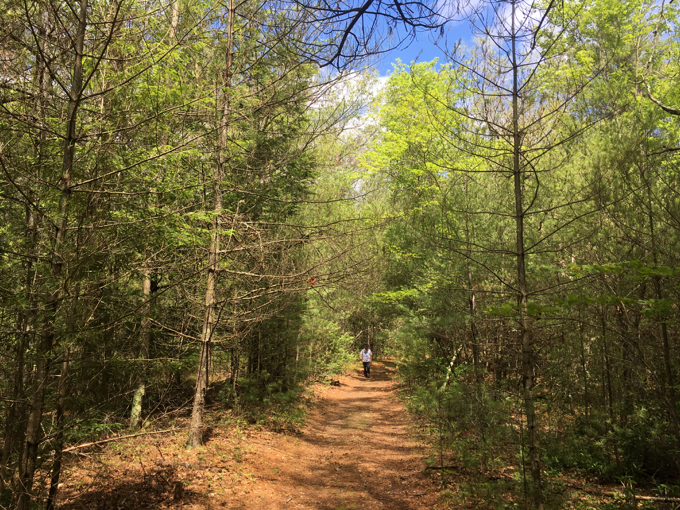 What can be funny is Damian’s habit of just crashing off-trail when he sees me ahead. I’ve written this often, but finally took photographic evidence of it. This is at the end (and beginning) of the trail; a very steep decline (or incline) to the hiker’s lot. 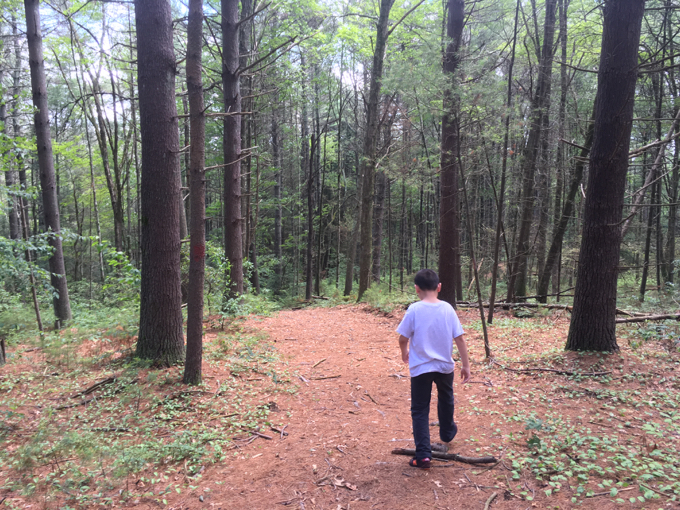 The trail curves around and sort of tries to side-hill it a bit. I had already walked that and then came Damian, blithely bumbling through the woods, then the brush, then down the 60-degree hill. I’m guessing it was here he got stung by a bee, but who knows with him. 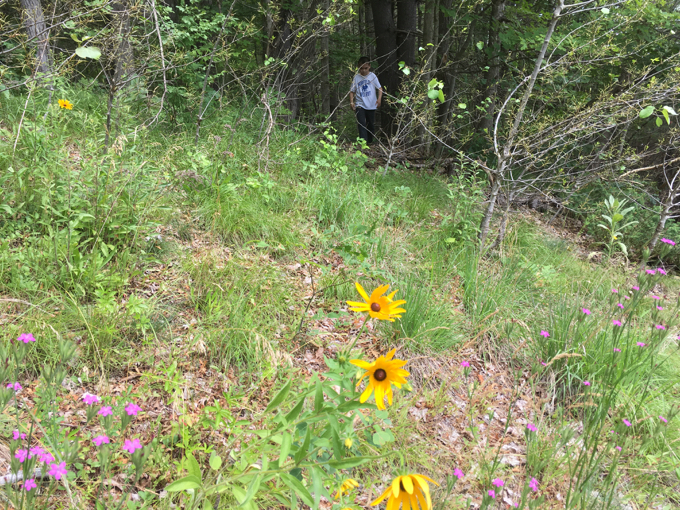 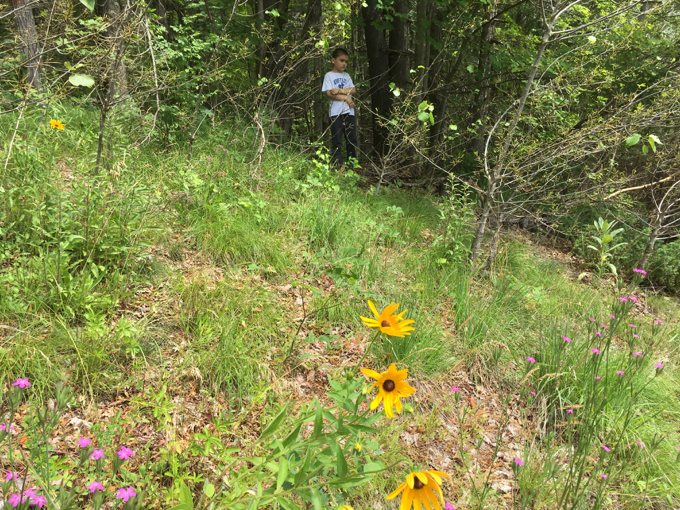 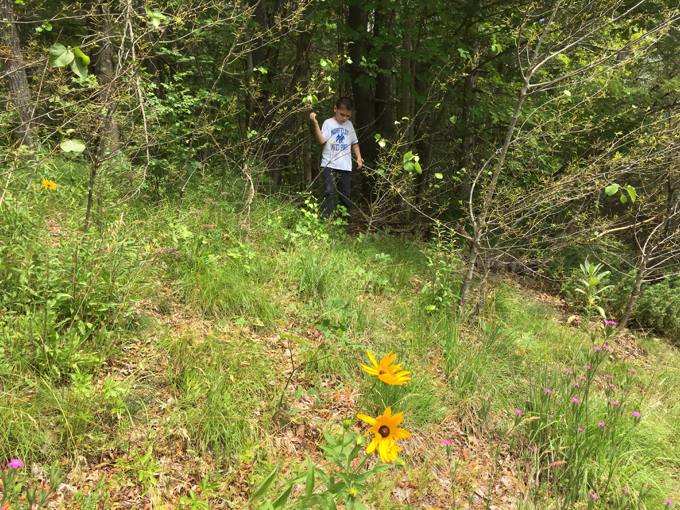 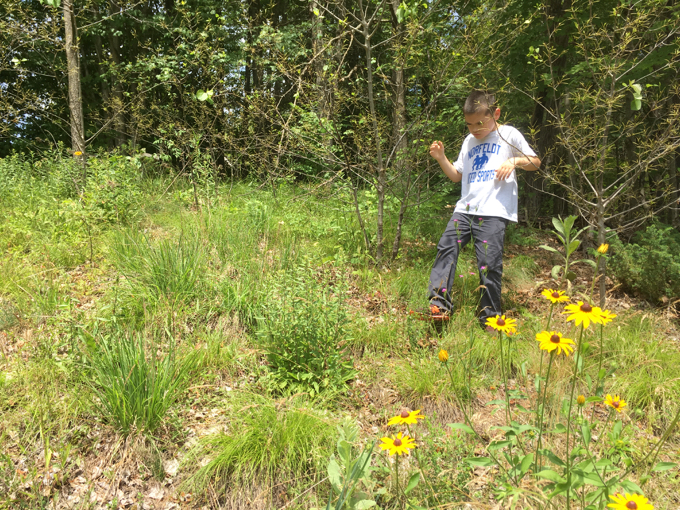 That kid is something else.