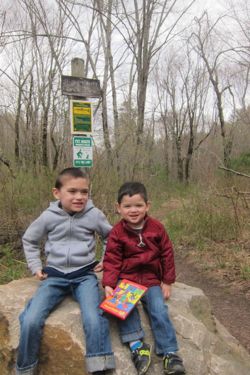 I’ve been on a kick lately hiking with my sons. Credit the endless winter of 2013-14 and our shared need to just get outside now that the weather has warmed above freezing. (That and my OCD telling me that build out my new CTMQ sections on land trusts and town-owned trails, but you don’t need to know that unromantic reason.)

On this day I planned to take my boys to two of Glastonbury’s properties that are situated relatively close to each other. We started here, at the Shoddy Mill Preserve off of Shoddy Mill Road. The boys were full of vim and vigor out of the gate.

The longer trail here clocks in at maybe .75 mile and begins along Roaring Brook. Calvin thought the sandy parts of the trail were hilarious, because, “We’re not at the beach!” We took the blue/white blazed loop clockwise, which first took us along a long, flat stretch through hemlocks and white pine.

The trees here are huge and majestic and the trail allowed for my charges to literally run the path. At one point, Damian yelped, “This is fun!” which was music to my ears. The soft mat of evergreen needles and pancake flat track were ideal for him. I walked behind them and just enjoyed the moment. 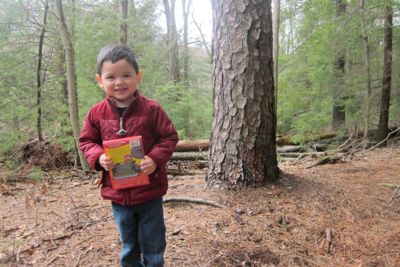 “Papa! Take my picture with this tree!”

At the northern end, the trail turns east and heads up the hill to the top. The running stopped, but their enthusiasm never waned. (And let’s be honest, the climb isn’t all that difficult here.) The hill overlooks Roaring Brook down below – at least with no foliage on the trees and shrubs. Damian has always liked to hold the map and while his understanding of how the map translates to reality is rudimentary at best, I’ve always enjoyed that aspect of our hikes.

Little Calvin has picked up on this and during this hike, he began demanding to see the map as well. It was impossibly cute. Don’t believe me? Watch this:

We weren’t alone in Shoddy Mill. Although we never saw any other humans, it was clear that we hiked into the middle of some larper get-together or something like that. There were a few trails that connected to the mapped one we took, and who knows where they headed off to. But on our trails, we came across several signs like this: 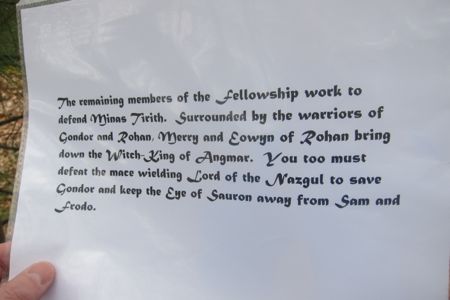 I have no idea what any of that means, nor do I want to. Everyone needs a hobby. Even if these were ostensibly near-adult teens who still play with stuff like this: 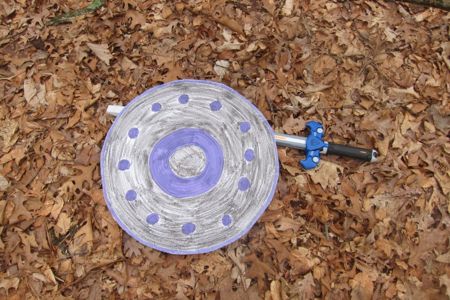 To which Calvin said, “Someone left their toys here?” Yes, Calvin, that’s exactly right. And no Calvin, they aren’t your age so you can’t play with them. Even if this toy would be age-appropriate for you. Man, I hope I never have to have “the talk” with him.

Y’know, the talk about larping. 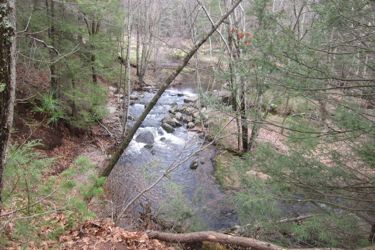 The trail went to the top of the hill above the actual shoddy mill dam. The unofficial trail down to it was way too steep for my kids to negotiate, so we just sort of looked at it from above. There is another trail here, on the other side of the brook, that affords hikers much safer access to the crumbling dam. And since I’m not red-lining Glastonbury’s open spaces, we skipped that short little jaunt.

The Shoddy Mill Preserve, consisting of 77 acres, was acquired by the town in the late 1960’s as part of an overall plan to create a greenbelt along Roaring Brook. Interesting features include the beautifully constructed Shoddy Mill dam, and a high gravel ridge paralleling the brook to the west. The mill produced “shoddy” (reclaimed wool, usually made from rags, which can be processed into felt or fabric of inferior quality.

That’s cool – cooler than the Wizard Hut I saw through the woods: 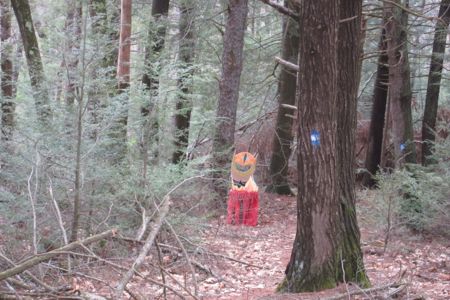 But let’ s learn a little more about that shoddy mill from old friend Peter Marteka’s column about this place:

According to Marjorie Grant McNulty’s book “Glastonbury From Settlement to Suburb,” the Shoddy Mill once manufactured shoddy or reprocessed wool. Even back in the 1800s, recycling was a part of manufacturing and a cheap way to make a product. Shoddy was an inferior woolen yarn made from fibers taken from used fabrics and reprocessed.

“Over a period of 65 years,” the book reads, “men from the Crosby Manufacturing Company would go to the mill to grind woolen waste of different colors into a dark blue product from which a woolen yarn was spun.” Operations at the mill ceased in 1906 and it was turned into a tenement house complete with a swimming pool – the dammed-up area behind the mill – which has since turned into a giant marsh.

And now, thanks to the efforts of some preservation minded folks in Glastonbury, you can come and check all this out on your own. (We continued on over at Blackledge Falls after this.) 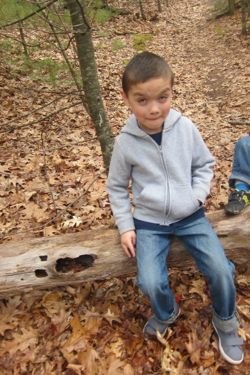 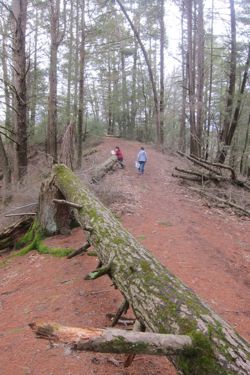 Damian is mimicking the “face” in the log, by the way 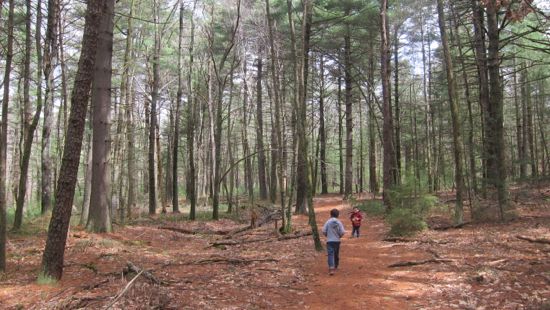