Are you ever remotely curious about how CTMQ… “happens?” No? That’s fair. I was merely going to mention that I visited this monument for the express purposes of this here website on September 2nd, 2013. Labor Day. At that time anyway, the tower was only open for climbs on Labor Day and maybe one or two other times during the year. 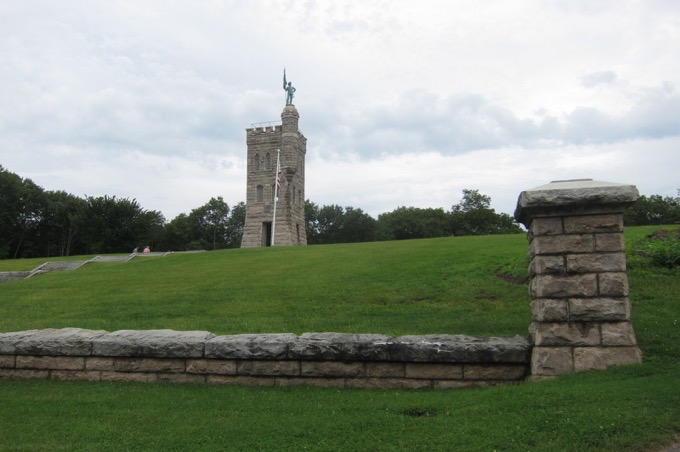 And yet, today is April 3rd, 2020 as I write this. In other words, it has been six and a half years between visit and write-up. (This is an extreme case, but still.) Why? Because I have no editor or deadline or content manager. And also because I’m lazy.

You see, there is (or was, anyway) a ton of signage in the tower about the tower. Thousands of words of it. And I simply never felt like trying to read my blurry pictures of those signs and trying to pull out the interesting stuff for you. But just now – today – on a rainy Friday in April of 2020, I decided to buck up and get to it. 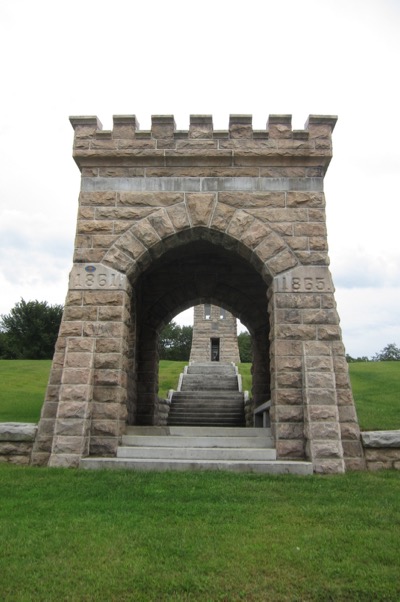 So I Googled the monument and read a bit about it on Wikipedia. Bleh. Then I saw that the Connecticut Historical Society wrote about the tower and… holy Toledo, the signage at the tower was merely a reprint of the incredibly detailed and extensive CHS page! So now I don’t have to transcribe a thing! Hallelujah! 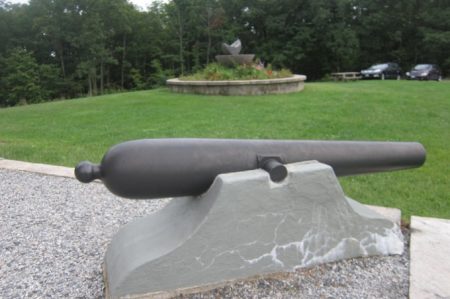 The memorial was completed in 1890 after a protracted disagreement about funding. It’s fascinating to read how much of an event its opening was. As you can see, it’s located in a park on the top of a hill. The monument is dedicated to the town’s Civil War veterans and is said to be one of the state’s more elaborate memorials to that war. Elaborate in the sense that it was designed with imagination! And… you know what, let’s let people much smarter than I am explain this thing. 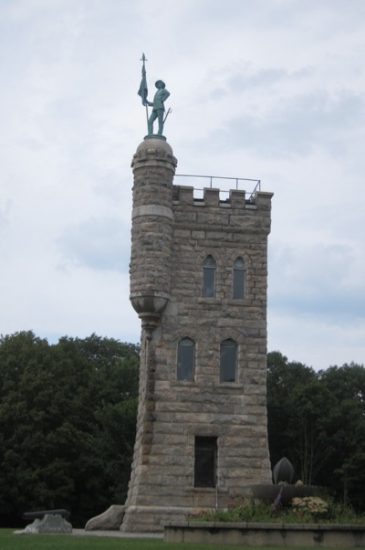 The Gothic Revival tower is Richardsonian in its massiveness and rough masonry material, yet it soars skyward from the hill top, using a tourelle to thrust a rakish soldier figure well above the crenelated roof line. The monument is a testimonial to the combined creativity of two talented Connecticut designers, Robert W. Hill of Waterbury, the architect, and George E. Bissell, formerly of Waterbury, the sculptor. Their joint work places the memorial in the top rank of artistic creations among Connecticut Civil War monuments.

Depth and quality of local resources are highlighted by the stone, from a quarry at nearby Highland Lake owned by Stephen Hurd, and the workmanship of the local contractors, Stone & Wooster. The design, materials, and craftsmanship of this exceptionally fine and little-known work all attest to the remarkable artistic and practical resources of provincial Connecticut. 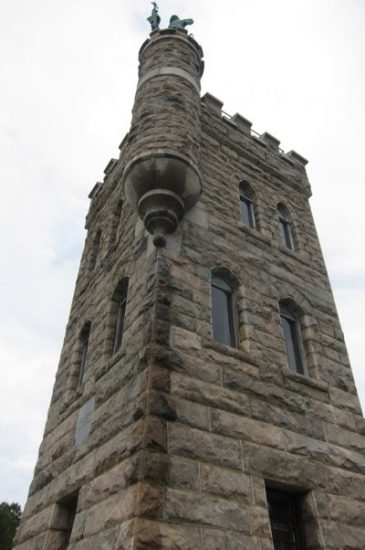 You see? I told you. I also told you that the monument was funded after some infighting. Local clockmaker William Gilbert’s generous donation was denied for some reason, but then some other locals chipped in and the tower contract was drawn up. Now, what about that crazy party when it was completed?

As the monument neared completion, elaborate plans were put in place for Dedication Day on September 11, 1890, and a great day it was indeed. The town was extensively decorated for the event. Four professional decorating firms from Hartford, New Haven, Springfield, Massachusetts, and Brooklyn, New York, for fees ranging from $5.00 to $30.00 per structure, “fairly smothered” the buildings for two miles along Main Street “with festoons of banners, bannerets, with flags and shields” in the national colors of red, white, and blue (The Hartford Courant, September 12, 1890). The crowd on hand for the event was variously estimated at 10,000 to 20,000 people, many of them brought to town by special trains. Before the ceremony, luncheon for 3,000 was served in the rollerskating rink by the collation committee of 80 women. 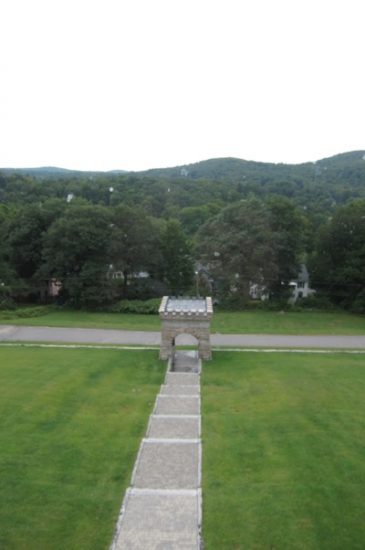 Wow. That’s nuts. All for this tower. I was personally excited and threw my own little party when I made it up on a rare open day. Unfortunately it was hazy and cloudy during my visit, so I didn’t get the full view of the land, but it was still nice.

But really, drive a little bit more west on route 44 to Haystack Mountain and the tower there and although not dedicated to war heroes, it’s just straight up better. 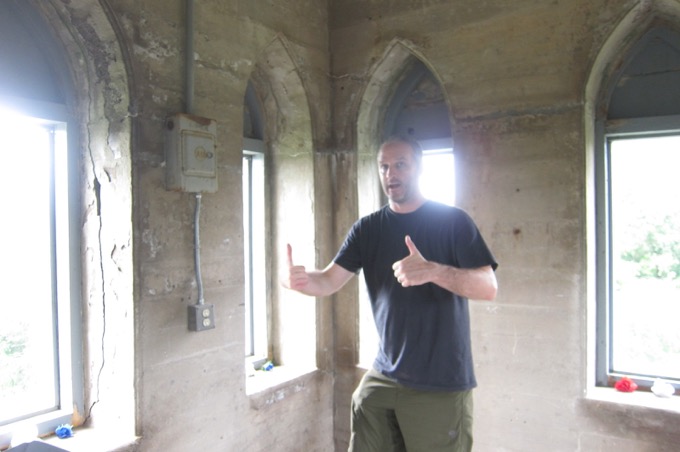