A couple things to preface this page:

1. I had a really fun time at the Stafford Motor Speedway.
2. This was, in part, due to the fact that it marked my final visit in Stafford. I’ve completely completed the town! 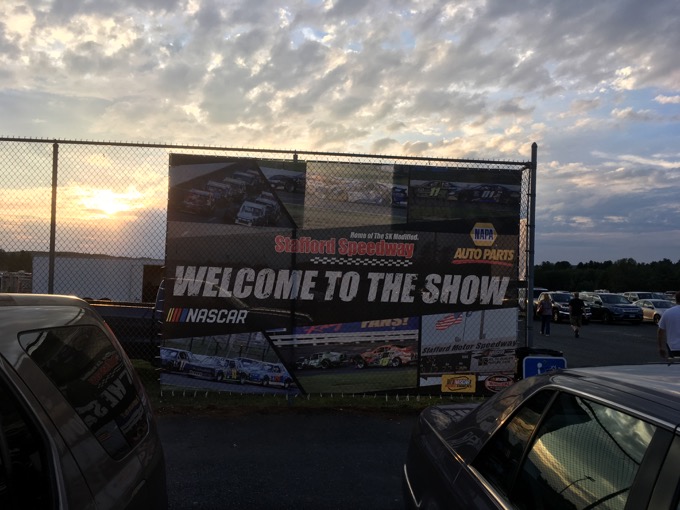 That’s right, friends, I did it! I visited everything there is to do and see in Ashford, Enfield, Manchester, Stafford, and Vernon! And what better place to reach the checkered flag… to cross the finish line… than at the Speedway?

No one appreciates the poetry to the moment. Sigh.

There are infinitely more important events going on in our country right now than my completing the fifth Connecticut town for this little website. (If you’re reading this in the future, a bunch of Nazis and white nationalists just carried tiki torches in Virginia and murdered a woman. Our president offered only a forced milquetoast refutation of the racists while making sure to blame those who oppose Nazis and racists for the violence as well. MAGA, indeed.) 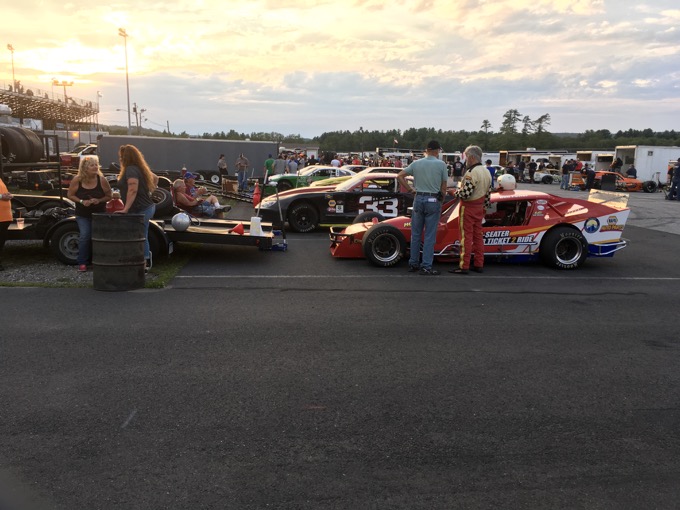 So with all that swirling around in my head, Calvin and I went to the Speedway. If I may, here’s a bit from the late, great A.A. Gill’s preface to his A.A. Gill is Away:

You know that science fiction isn’t really about the future, it’s all about the week it was written. Nothing dates like science fiction[…] Well, travel writing isn’t really an exploration of where you’ve been, so much as an explanation of where you’ve come from. All journeys end up at the same address. Back home. Travelers don’t write for the people they visit, but for the people they’ve left behind.

The relevance of this candidish truth depends on where you call home. The question you need to ask travel writers isn’t “where did you go to,’ but “where did you start from.” Observations of abroad often tell you more about the observer and his culture than the people and the place he’s commenting on. 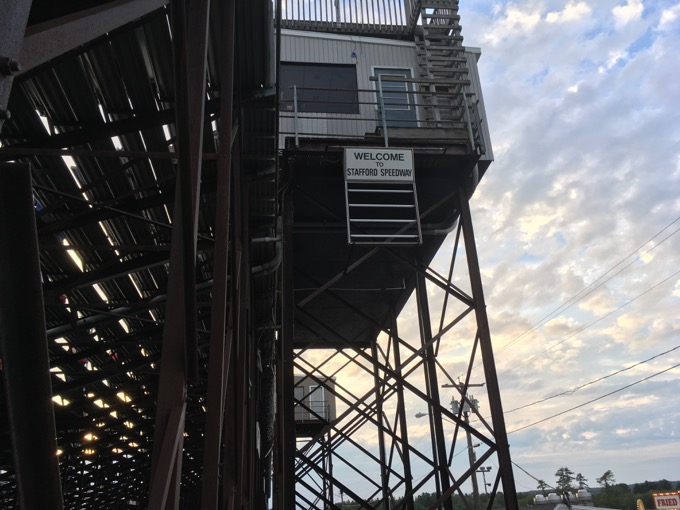 He goes on to explain his background, so I’ll do the same. I’m an Anglo-Saxon 6’3″ blue-eyed college educated male with a house in West Hartford.

My wife is an Asian war refugee. She spent time in a refugee camp. She lived in a housing project. She is an immigrant from a war-torn communist country at a time when Americans properly hated communists. Though immigrants, she and her four siblings are spectacularly successful. That’s what America allows and fosters. We have two little boys. One of them is profoundly disabled. 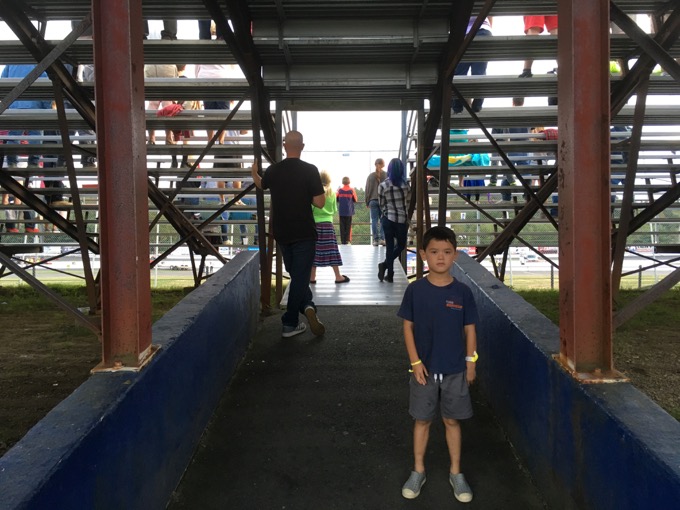 We are not enjoying the Trump presidency.

Hoang (my wife) and Damian (my disabled son) did not join us for a night at the Speedway. That wasn’t really in doubt. She just didn’t feel it would be fun for her for some very real, very personal reasons. 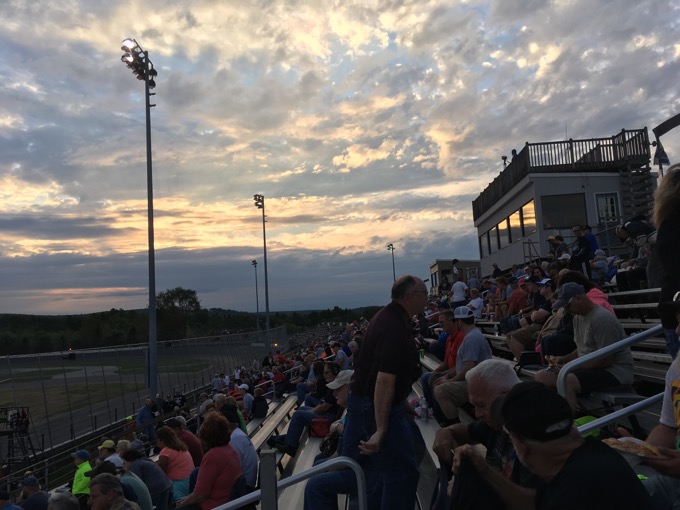 Here’s the thing: This isn’t an issue for me. I fit in perfectly fine. No one would give me a second glance. I “belong” there. Heck, I can go almost anywhere in the US and be fine. I don’t care if it’s a Jewish temple, the Slauson Swapmeet in South Central LA, the backwoods of Alabama, a Trump rally, a Bernie rally, a mosque, a $50,000 a head dinner in Greenwich, a swamp buggy race in central Florida, Burning Man, an Inuit village, a honky tonk bar in Nashville, a blues bar in Mississippi, a gay bar in Chelsea, an Antifa meeting if such things existed, a tent revival, a Mormon gathering, a rap concert, a death metal show, a car show, a champagne and caviar tasting, a gun show…. almost anywhere.

And a taxi wouldn’t hesitate to take me there.

That is just the way it is. Can every American do all of that? No. To pretend otherwise is denying reality. I’ve seen it with my own eyes and have heard it with my ears. Bros feel comfortable saying racist crap around fellow white dudes. Trust me. And sure, everyone knows an interracial couple now, but if you think every American is comfortable with that, you’re nuts. 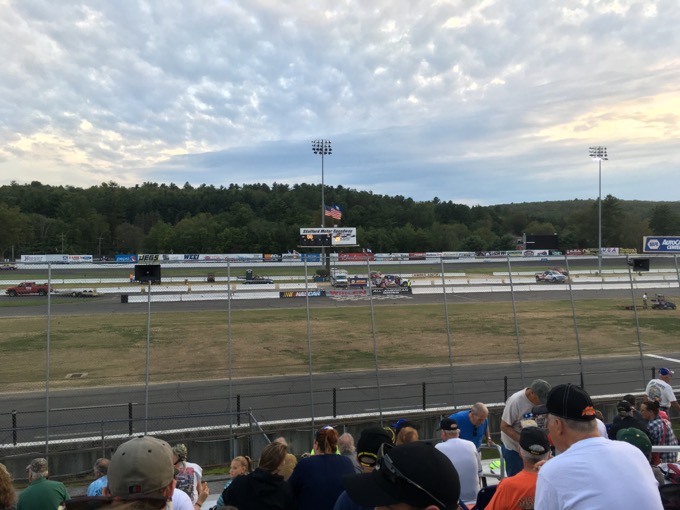 Let me be clear: I neither saw nor heard anything untoward at Stafford Motor Speedway. Everyone was perfectly nice to me and Calvin. We had a great time. I would say that Hoang would have been perfectly fine, but that’s not my call to make. It’s hers and that’s important.

While there, I challenged myself to find a minority. Just one. (Other than my son.) I tried. I really tried. And I found exactly zero.

I love hockey and I love hiking. This isn’t much different than the UConn hockey games I go to. I know that. Hoang and I hiked through the White Mountains in New Hampshire and I think we saw one other minority in an entire week. There are “white people things” and “non-white people things.” 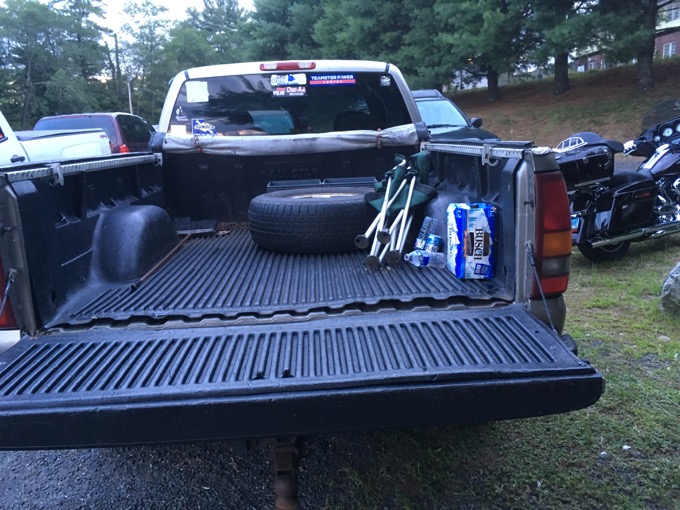 Motorsports is, for the most part, a white people thing. And again, that doesn’t mean it’ a bad thing. But it’s a thing I was thinking about as I passed dozens upon dozens of Trump bumper stickers in the parking lot.

The racial divide is quite stark when you are honing in on it like I was. And thinking about that A.A. Gill quote… That I was a traveler to a place with a culture I’m not super familiar with. And how my reporting on it isn’t for them, rather, it reflects where I’m from. I’ve lost sleep over this. 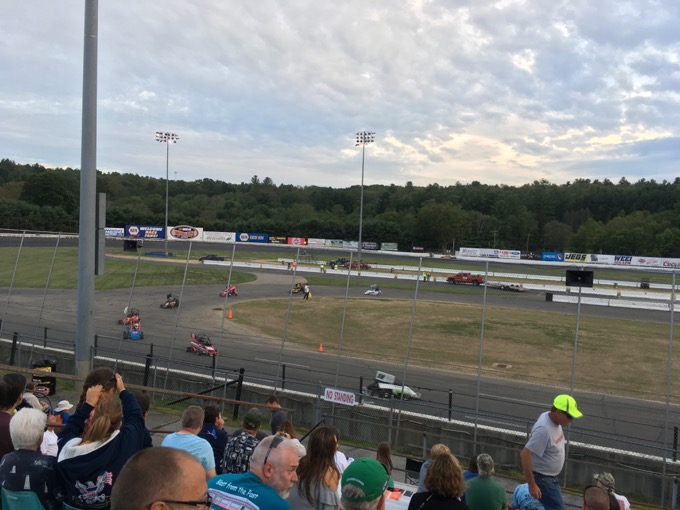 Calvin and I took our seats just as the first race began. You see? This whole place is about race! Not one race, but there’d be many races through the night. Such a beautiful thing!

Anyway, the first race was with these things called Wild Thing Karts. They are TINY and go around a tiny little oval track inside the larger track. Calvin thought they were hilarious… and they kind of were. 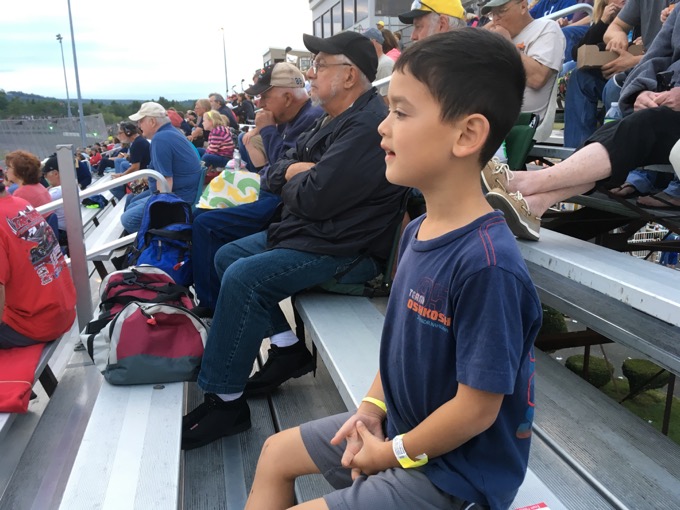 But he was into it!

The best thing about going to the races at Stafford is that each division race is super short. The Wild Karts were done in ten minutes. Then the transition to the next division is super fast and smooth.

The Karts depart, and the DARE Stock cars come onto the track for their 15-lap race. I should also note that there is a constant running commentary from the press box and it’s very well done and not annoying. I was entirely impressed with the organization of the whole operation. They certainly know what they are doing here. 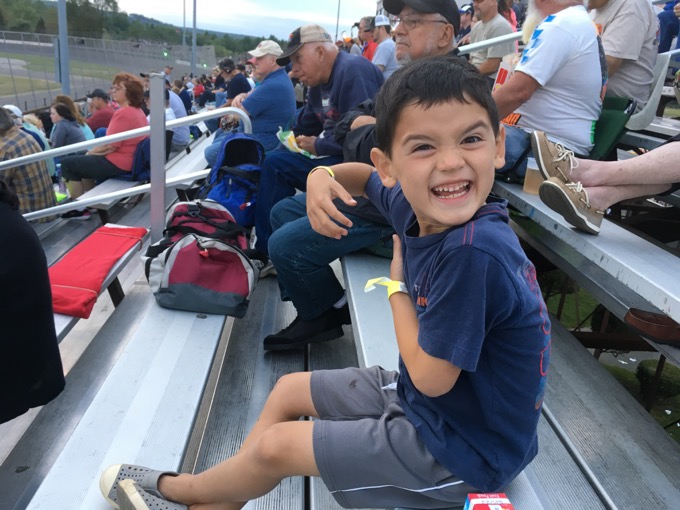 That doesn’t mean I understand any of it. The DARE Stock cars did their thing, then the Limited Late Model cars came out. What’s the difference? I don’t know and I’m not going to go figure it out either.

I figure each succeeding class of cars are faster and have bigger engines and the drivers must be more experienced. (Though several raced in multiple races.) I can explain most sports and bore you with details… but not motorsports. I’m a snowflake I guess. 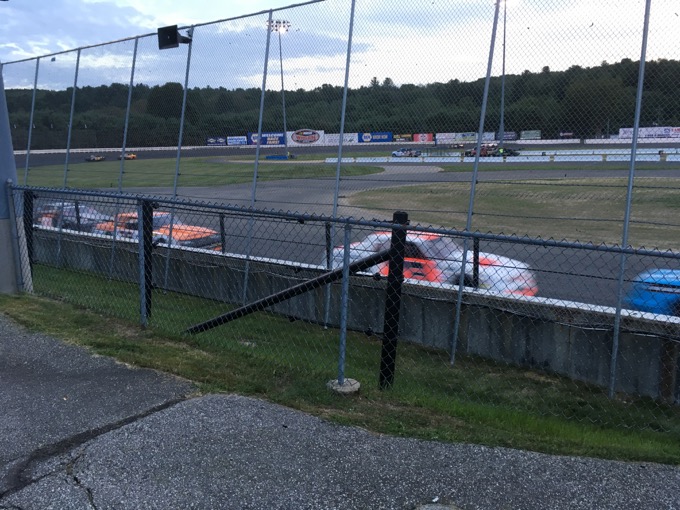 As the speed increased, so does the noise. I had this whole epiphany during my Speedway experience: It was pretty darn fun and exciting. The sound of those cars was invigorating. I imagine a real NASCAR race like the ones on TV shakes your whole body. Even at this track, the speed of the cars and the proximity to each other was impressive to me. 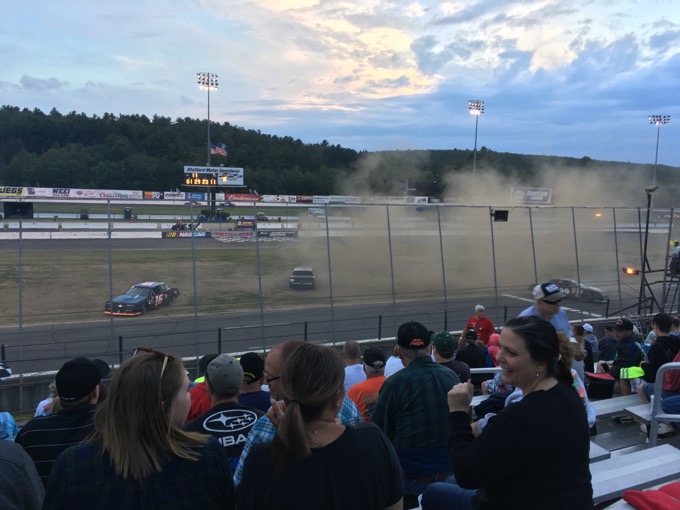 Spin-out in the dirt!

The races? Nah, not so much. Lead changes were exceedingly rare. There was always one driver well ahead of the field in all four races we watched. (There are no pit crews or anything here, hence the shorter races. You bang your car up or get a flat or whatever, you’re done for the night.) 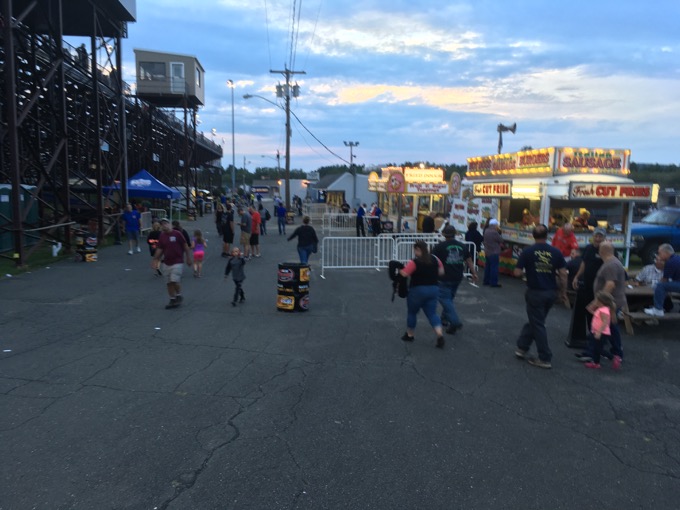 Ah, yes, the crashes! It’s true, the crowd’s only cheering occurred when cars crashed. There was a really exciting crash that happened right in front of us when a green car got squeezed and went airborne for a bit, but landed and continued on. That was rad.

There was a “real” crash too. The emergency response was quick and voluminous. It’s a hard thing to explain to a 6 year old that the fans like the crashes. Well, he did too until he started thinking that people might get hurt (the ambulances and such have that effect) and he wondered why people liked that. 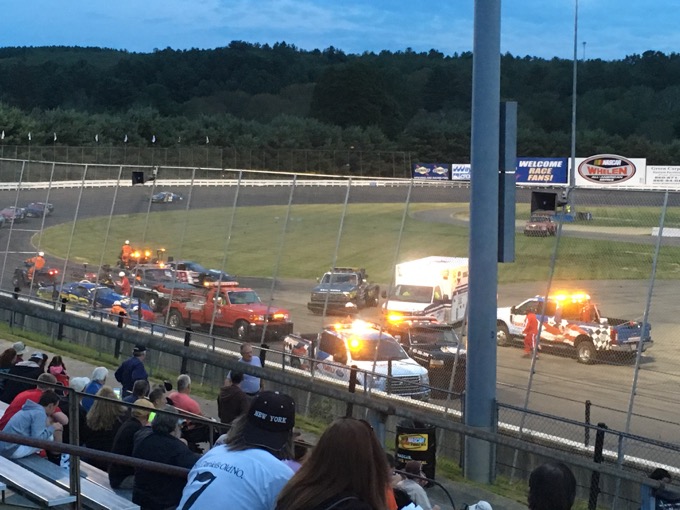 Hm. That’s a whole thing, Calvin. (One which I’m certainly guilty of myself.) I simply said that no one wants anyone to get hurt, the drivers are all wearing safety gear, the cars are built to be really safe, but, yeah man, it’s exciting to watch cars crash.

As night fell and the Late Model Feature race featured no crashes and one driver crushing everyone else and they just went around and around the oval, Calvin suggested we go home. I suggested that was a good idea. 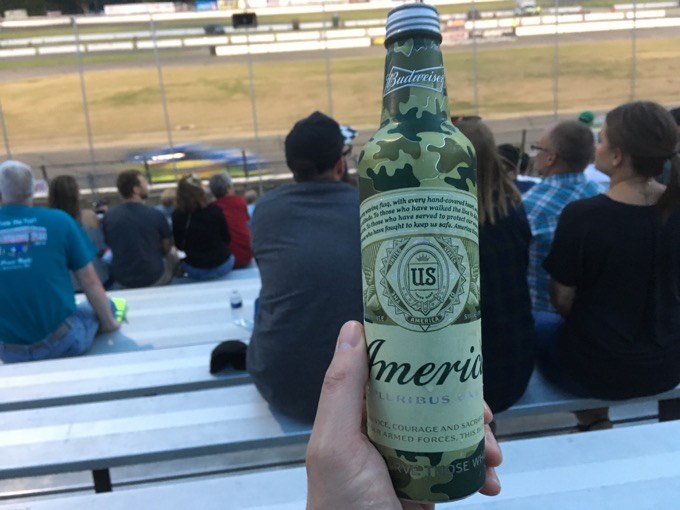 We said goodbye to the kindly older couple next to us who had sat in silence the entire two-and-a-half hours were were there. They smiled and waved. We used the restrooms (port-o-potties for the whole racetrack) and hit the road.

I had done it. I had “completed” not just Stafford on this night, but Ashford, Enfield, Manchester, and Vernon were all complete. I had reached the finish line. Got the checkered flag. And I did it at a place that embodies America to a huge swath of people. 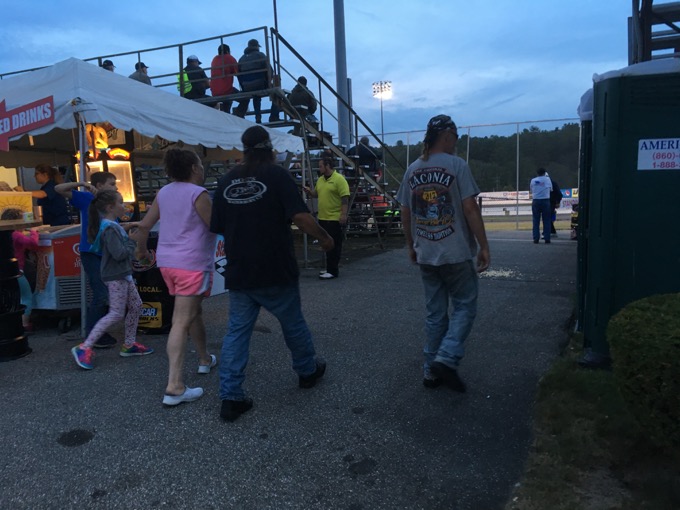 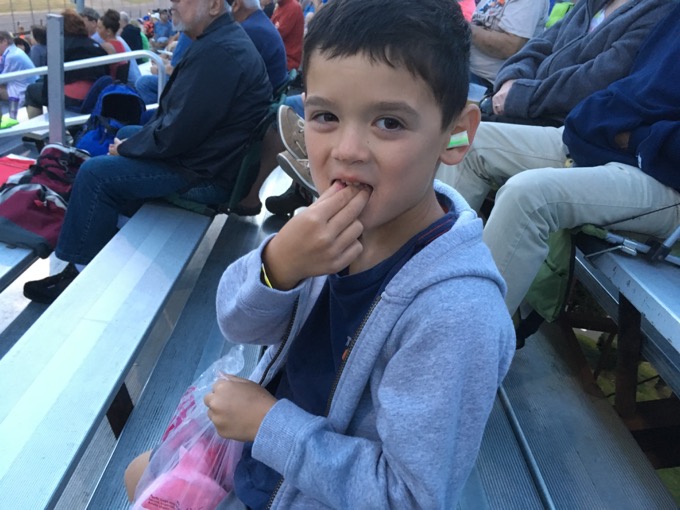 You get all of that at Stafford Motor Speedway. And for the people that are into it, it’s great. I know people who live in Stafford simply because they want to be close to the track. Car racings appeals to a broad swath of people. 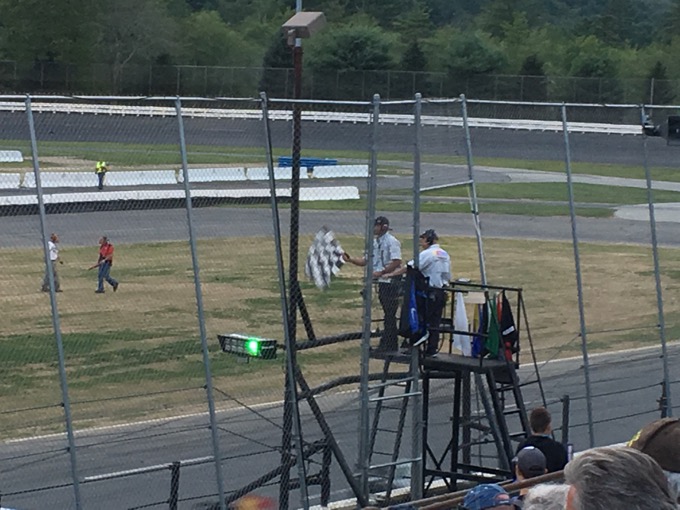 I did it! The checkered flag!