And I will shout, “FREEDOM!”

The Freedom Trail encompasses sites in Connecticut associated with the heritage and movement towards freedom of its African American citizens – and the Amistad Trail is a very important part of that. 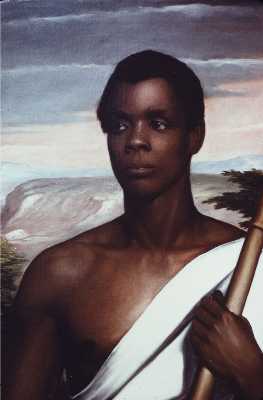 In 1839, 53 Mendi Africans who were bound for slavery in Cuba aboard the ship Amistad took over the vessel under the leadership of Joseph Cinque. Although Cinque insisted that the ship be returned to Africa and he and his compatriots to their homes, the crew instead sailed into Long Island Sound, where the boat was taken into New Haven by the United States Navy.

What followed was a landmark case before the U.S. Supreme Court, successfully argued by former American President John Quincy Adams. Adams argued, and the court agreed, that all human beings were naturally free people and entitled to that freedom under American law. Subsequently, the Africans were freed and they chose to return to Sierra Leone.

Below is the list of sites throughout the state that are important to this story. Each has a description of its importance to the Amistad story, as well as any other general historical information of interest. I will visit each site, take a picture, and note anything I feel should be noted.

Out of his home on South Street, attorney Tapping Reeve developed the first curriculum for teaching common law and opened the first law school in the United States. Tapping Reeve’s success with the law school and the law he taught his students was critical in the arguments used in the Amistad Case. Shortly after Judge Judson’s initial hearing on the USS Washington, Dwight P. Janes, an abolitionist from New London, contacted Roger Sherman Baldwin, an attorney known as a defender of justice for the less fortunate. Baldwin, who attended the law school in 1812, was the primary lawyer for the Mende Africans and argued their case all the way to the Supreme Court. The Litchfield Law School launched the town into regional and national prominence. Ultimately, the small law school would boast of having educated two vice presidents of the United States, as well as 14 governors, 14 members of the federal cabinet, 28 U.S. Senators, 100 members of the House of Representatives, three members of the U.S. Supreme Court and many state and local public officials.

The Freedom Schooner Amistad, a replica of the original vessel, was launched in May 2000 and participated in OpSail 2000 in New York City and New London, Connecticut before sailing to its homeport of New Haven. On a symbolic 2007 voyage retracing the infamous route of the triangular Atlantic slave trade, the Amistad visited Sierra Leone, Africa commemorating the 200th anniversary of the abolition of the Atlantic slave trade. Her most recent voyage in 2010 celebrated the tenth anniversary of the vessel’s first launch. The Amistad travels as an educational ambassador, teaching lessons of history, cooperation, and leadership to Americans of all ages, interests and cultural backgrounds in the many ports it visits. The Freedom Schooner Amistad is Connecticut’s official State Flagship and Tall Ship Ambassador.

The U.S. Custom House, designed by architect Robert Mills in 1833, was where the cargo of La Amistad was auctioned in October 1840. A separate incident is recognized by a plaque on the building’s facade: in 1858, an escaped slave won his freedom through the legal efforts of Judge Augustus Brandegee and Custom official, John Mather. Two conflicting laws were on the books, the Connecticut Personal Liberty Law which would free the slave and the U.S. Fugitive Slave Act which would return him to slavery. Letting the slave make the decision if he wanted to be captive or free, the man chose freedom. The Custom House is now a museum, as well as a working custom house. It is listed on the National Register of Historic Places and is maintained by the New London Maritime Society.