Reassessing Everything
The Brewery at Maple View Farm
May 2019

I’ve been thinking about the old adage, “If you don’t have anything nice to say, don’t say anything at all.” While I’ve been clear in my 13 years of writing everything on this website that I sometimes simply must not be so nice, something about the Brewery at Maple View Farm has given me pause. Enough to perhaps abide by the saying… So let’s look at some pictures instead. 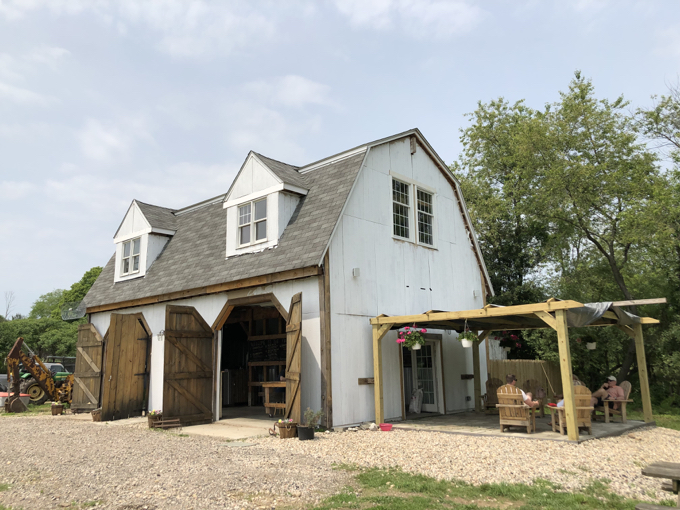 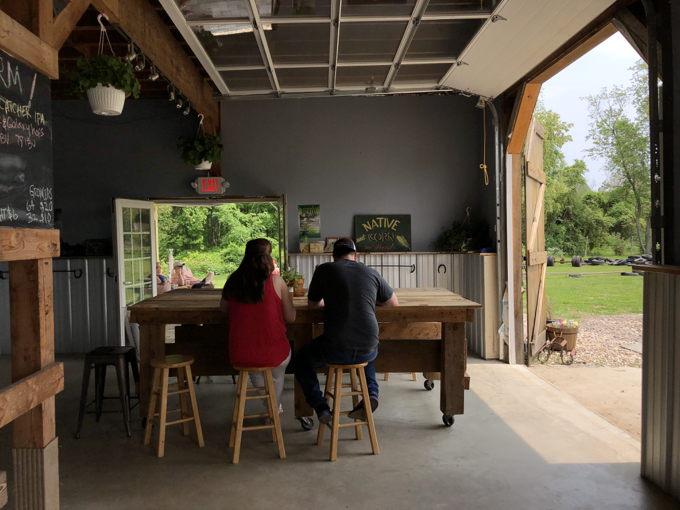 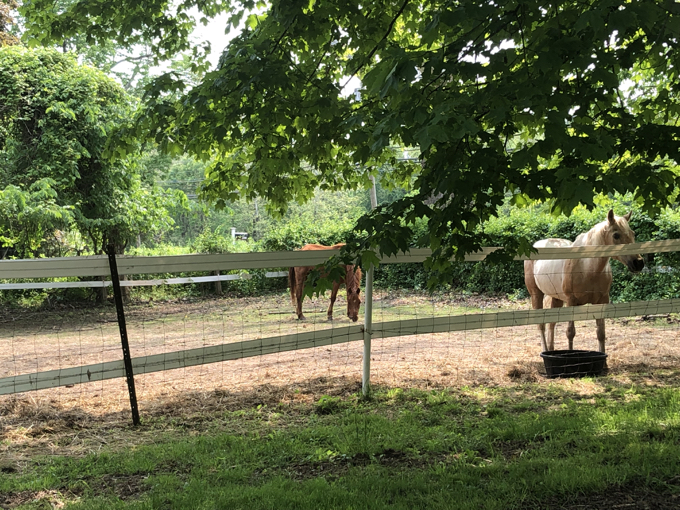 How quaint. How rustic. How… farm brewery-y. . First and foremost, this place in the heart of Granby is a farm. A real, honest-to-goodness working farm. The family who owns it care passionately about local farms and true sustainability. This isn’t the easiest path to forge in the 21st century, so props to them for not only doing so, but championing what they do.

We are 3rd generation farmers. in 1950, my husband’s grandparents moved from their small plot in East Hartford, to a beautiful piece of land in just south of the center of town on Rt. 10 in Granby. They noted how flat it was and how the brook wandered through it, bisecting the 50 acres and therefore providing easy access to water – something coveted by farmers. But they didn’t start the farm. It was already a working dairy farm and the cows and tractors came with the land, written right on the deed registered in town hall. Our land that provides food for our family and our neighbors has been farmed back to Granby’s settlement in 1635, with the land along the southern part of Route 10 divided in long strips from the road down to the Salmon Brook.

Passing the farm through generations can be tough. Many “farm kids” don’t want to come back to the family land. Too much work. Not enough money. And this is reality for lots of family farms. But really, a family farm is a small business. In order for the family farm to survive, the small business has to thrive. Otherwise, the only option is to sell the land. When we patronize family farms, we’re not just supporting the current farmers, we’re encouraging the next generation as well. Thriving family businesses are more likely to be handed down generation to generation and therefore farmland is more likely to stay in farming. 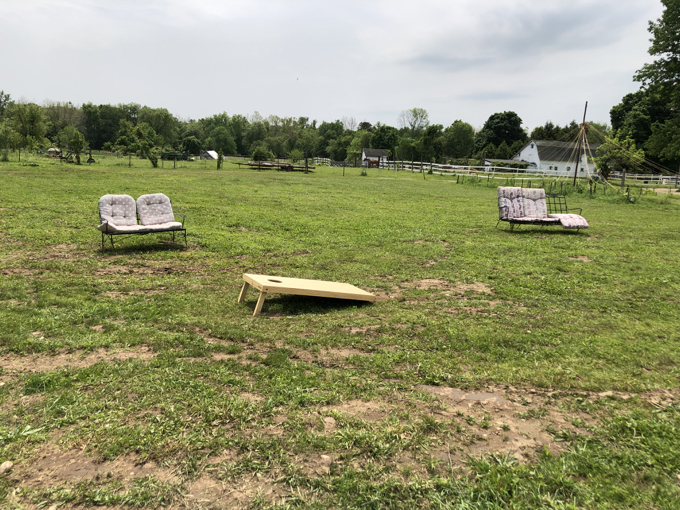 Like I said, owning a small family farm and making a career out of it can be difficult. Maple View’s owners moved here from Manhattan and the husband is (still) a lawyer and the wife worked in fashion/art/photography. So what are the fine folks who know a bit about the corporate world doing to make their farm successful?

Diversify! And Maple View has done just that; operating and AirBnb on their property, stocking an honor system farmstand out by the main road, and hosting summer horse riding camps for kids. It’s fantastic that the Bogli family has been able to do all of this, and –

They opened a brewery in early 2019 at the farm as well. 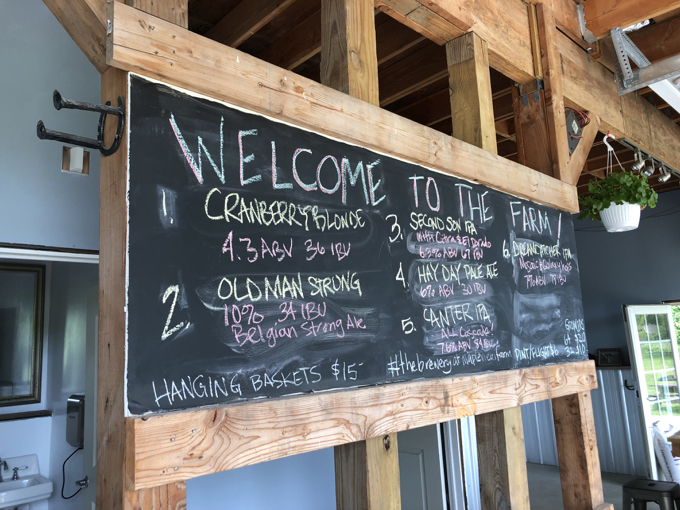 Anyway, as I was saying, Maple View Farm is home to horses, cows, pigs and chickens in addition to the farmers who, for 3 generations, have farmed the property. The farm operation provides meat, veggies, eggs and other local products to neighbors through the Farm Store. The updated 1935 Farmhouse, booked through Airbnb, offers guests a taste of what it is like to live on a working farm… if that’s your thing. The Boglis are committed to taking care of their 50 acres in the center of town so it can be farmed by their own children, grandchildren and for generations to come.

Am I repeating myself? Sorry. The old adage and all. 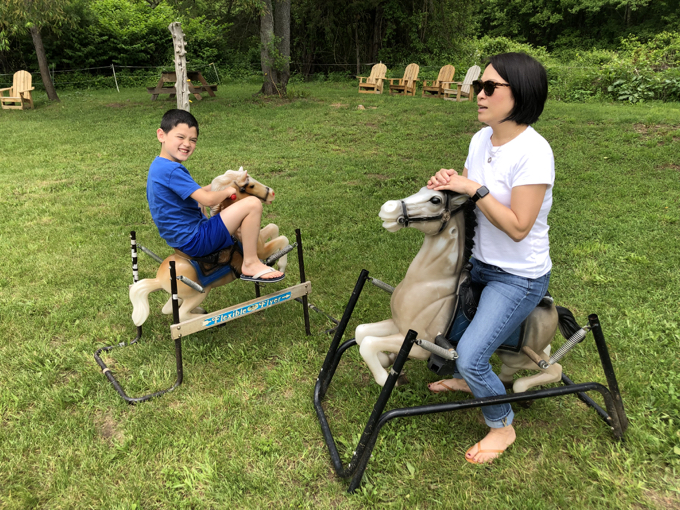 There are bands that play the farm every Saturday in the summer, which you can listen to while cooking your meats on the open fire – meats that are from animals that were raised at the farm! That’s right, you can come to Maple View, buy some meat, and go cook it over the fire. People love it! Also, free marshmallows are provided for toasting!

Um. There’s stuff for kids to climb on: Old tractor tires with mosquito larvae pools to study! Old-timey rocking horses for some reason! This place has it all. 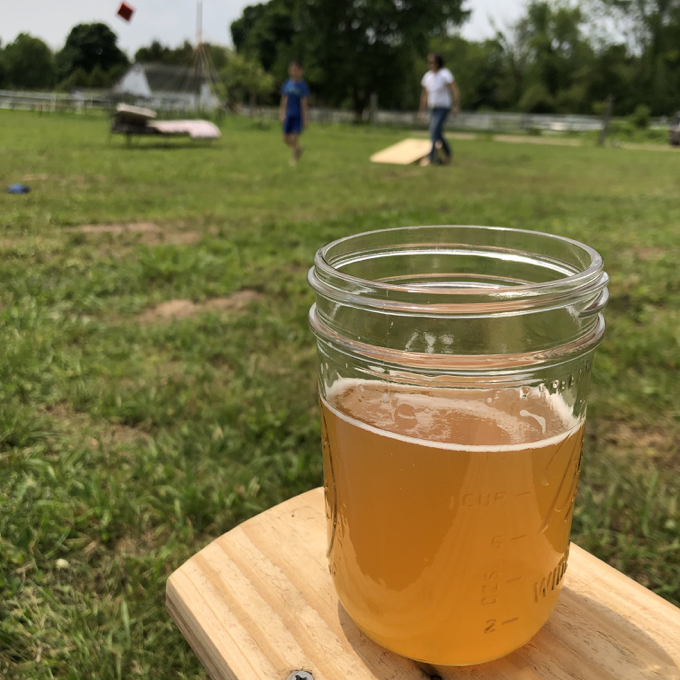 The folks we met at the farm were lovely. Full of smiles and kindness. Salt of the earth folks. Resourceful. Caring. Um. Okay, look, let’s just do this thing. But they were so nice though, and – deeeeeep breath.

The Bogli family who owns the farm and brewery had been homebrewing and also making their own wine and kombucha and stuff for years. Then Connecticut passed the farm brewery bill in 2018 and the Boglis said, “Hey, let’s do this.” So they converted their tractor barn into a brewing facility and voila! Now when parents drop their kids off to go horseback riding, they can hang out and have a beer. 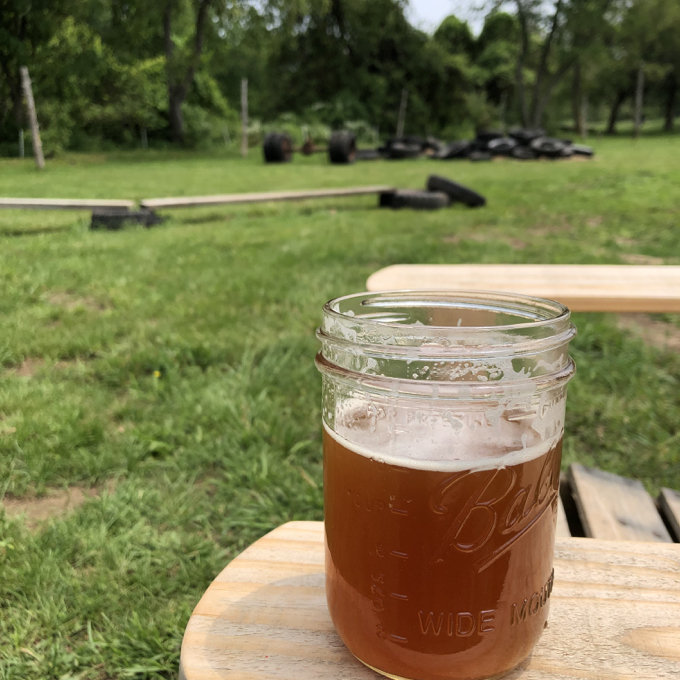 “It’s not a just a Brewery, it’s a Farm Experience.” That’s true. But I was here just for the brewery. Hoang and I ordered pints of the Cranberry Blonde and one of the four IPA’s on tap. Ugh. Mason jars? I get that it’s “farmy” and all that, but I hate drinking out of jars meant for canning vegetables. It’s just a dumb thing that someone did out of necessity a few years ago and for some reason some people thought it was cool.

Enough with the Mason jars (and all other idiotic glassware). Although, if we drank our first two beers out of the finest glassware available, it wouldn’t have helped. Both were… not so good; Hoang couldn’t even drink her cranberry blonde, and took my random IPA variant instead. We did finish both though, and I felt the cranberry one was okay. It was light and slightly tart. Just not something I need again.

I don’t want to pour gas on the fire here, but – 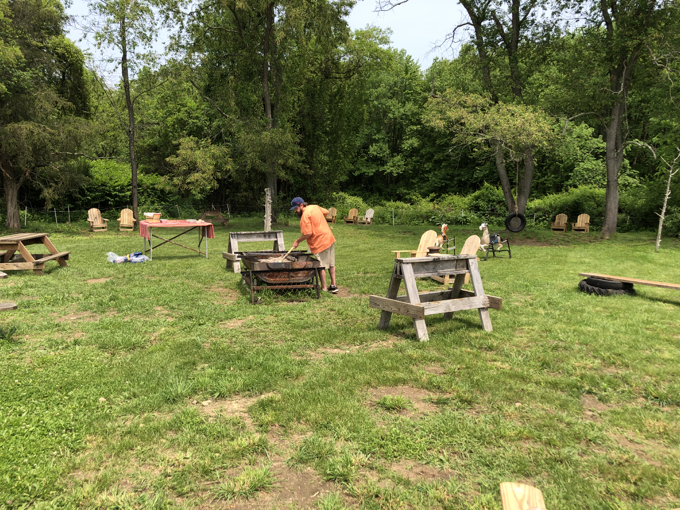 – Hey, I thought farm people were resourceful and hardened and wizened and all of that? My man was firing up the grill with copious amounts of gasoline? That can’t be the case. Let’s get back to the beer already – 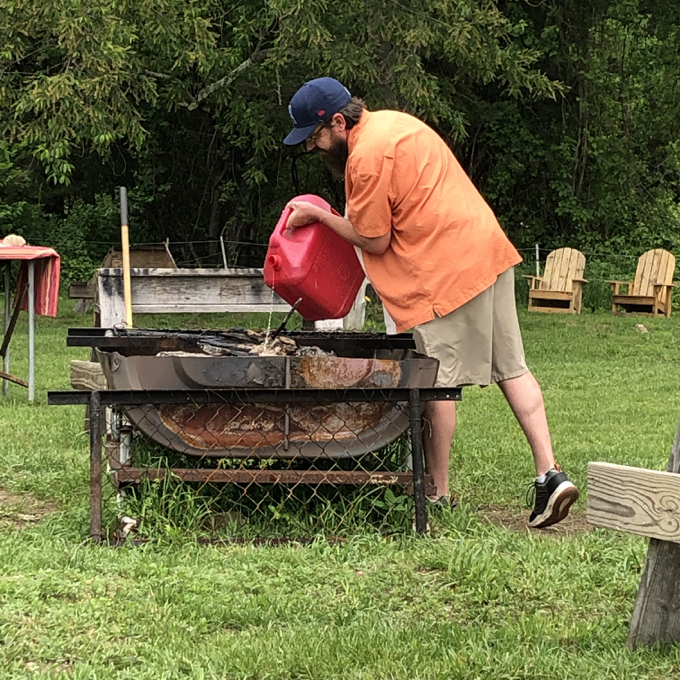 You gotta do what you’ve gotta do I guess. The fire was fired up and now Calvin could stop eating plain marshmallows and toast some up. Calvin also made friends with one of the owners’ sons and then went off to play. This farm (with a brewery) is very kid friendly, which is cool. 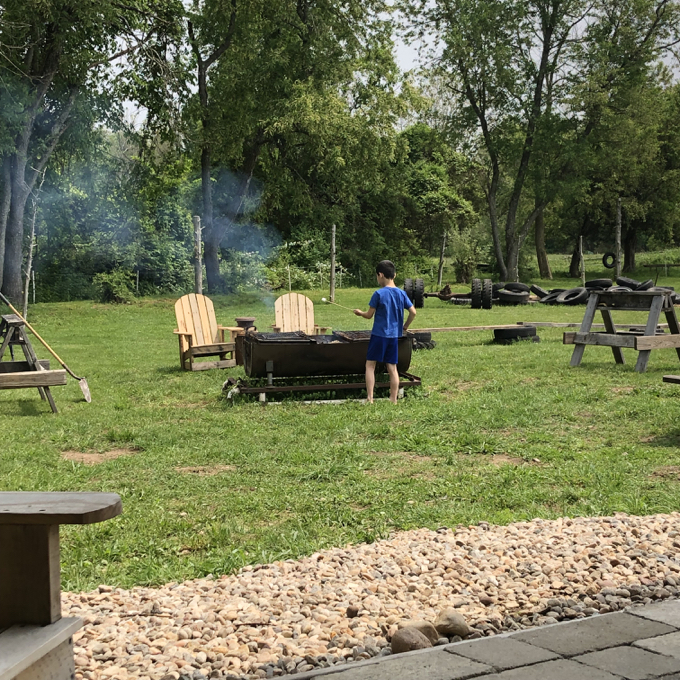 Unfortunately, they all tasted equally terrible; chock full of diacetyl and… dirt. Not “dirt” dirt, but grainy and musty. Yeah, so sour green appley IPAs with a weird dry grainy and musty undertone. And that’s how you can get all of your IPAs with fairly exciting hop bills to all taste the same. 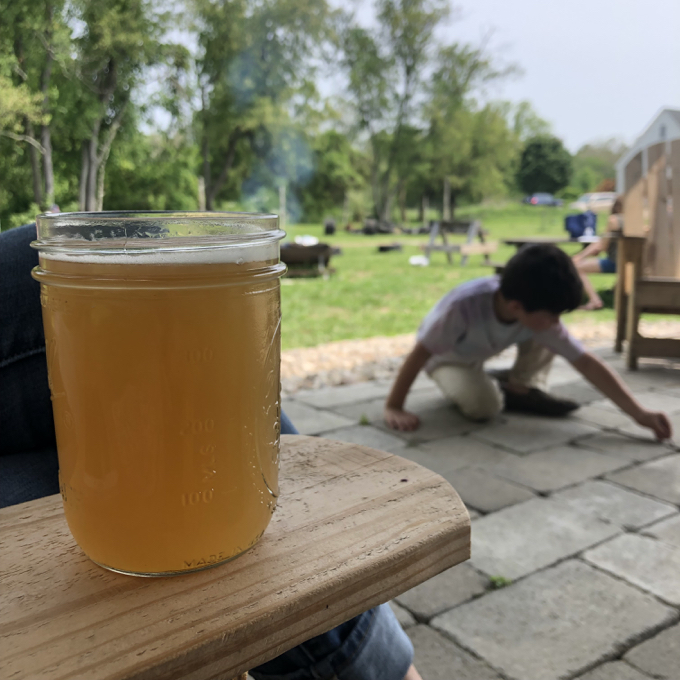 That full beer in a goshdarn Mason jar stayed like that for 20 minutes. Neither of us wanted to drink it. I just saw they sell growler fills for twenty bucks. I’m all for supporting local businesses and farmers, but… c’mon now.

Look, I want to support the Boglis and their efforts. A homebrewer opening up a commercial brewery using re-purposed homebrew equipment, serving below average homebrew isn’t going to work. I should rephrase that: It very well may work. Who knows. Lots of bad breweries seem to be doing fine these days, and Maple view has live music, meats to grill, and the whole farm cachet thing. 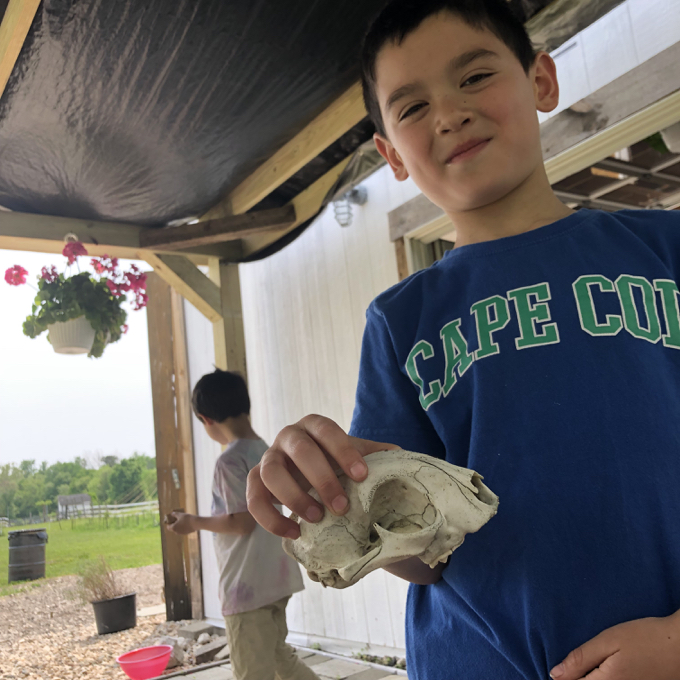 Bobcat skull! You don’t get that at every brewery.

My friend Will Siss wrote about Maple View in the Republican-American and noted “The Boglis plan to reduce their hours in the fall, and after selling Christmas trees in December, taking a break for January and February to reassess the business.” (I would love to link directly to Will’s articles, but the Rep-Am is hardcore about subscriptions. Which I support, and I pay for a few, and you should to.) 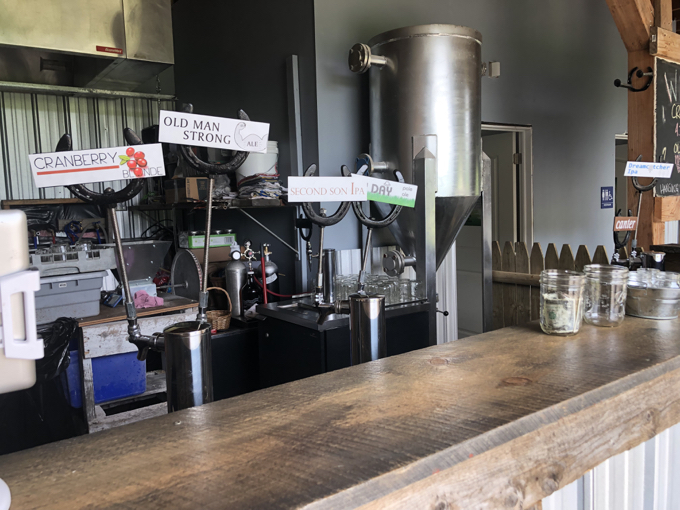 Anyway, that quote speaks volumes to me. I don’t think it’s that the Boglis have realized that charging people money for poorly made beers is causing them to reassess… I think it’s that the brewery is probably the 10th most important thing they focus on. After their children, their house, their Airbnb, their cows, their pigs, their horses, their farm stand, their law practice, and their chickens.

At least I hope that’s generally the order of things here.

Perhaps I need to reassess too. These bottom tier breweries are bumming me out. 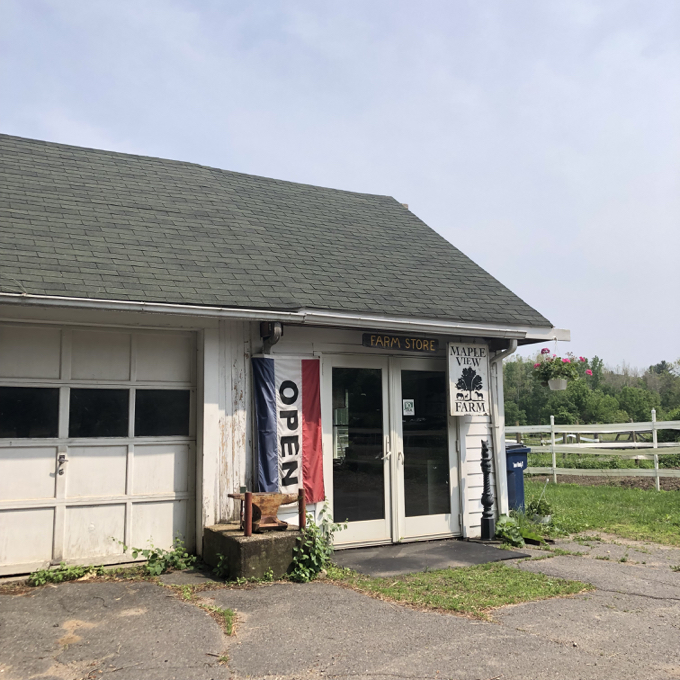