CTMQ > Everything Else > Geography > The Southwick Jog

TAKE BACK THE NOTCH!
The Southwick Jog, Southwick, “Massachusetts”
October 17, 2008

2017 Update: I just came back to this page and it occurred to me that I’ve never edited it or made it more current or anything. (Sorry, I can’t improve/enlarge the pictures.) Which is pretty lame of me, considering this is easily one of the most read – and commented on – pages on CTMQ. I love that last bit, by the way… You people actually sort of care about the notch! So let’s get to it…

I’ve been looking forward to writing this post for as long as CTMQ has existed. I bring to it a level of vitriol not yet seen on CTMQ. A historical thievery that must be righted! Take Back the Notch! Make Connecticut whole again!

Confused? Here’s what I’m talking about, in convenient picture form – from the Massachusetts perspective: 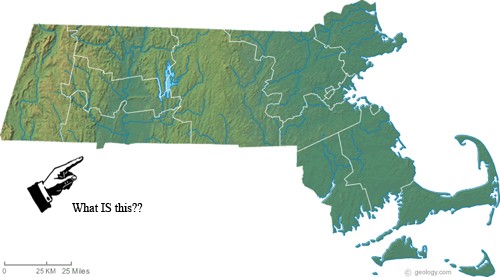 Or this may help: 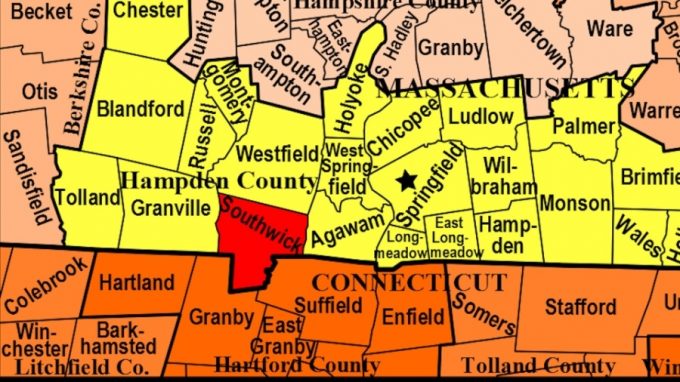 Or you can check out Google maps for another clear picture of this affront to all that is Nutmeg! How in the world did this happen? And when?!

Okay… the story has a few versions and it’s an old one. It has also spawned more than a few blog entries and Historical Society showdowns over the years. Heck, you can even buy shirts and hats and such demanding my home state takes back its dang notch. I’ve already ordered mine.

In my extensive research on the Notch, I came across Vol. 13, No. 147 (March, 1911), pp. 53-55 of Rhodera. I love this passage as it’s a nice appetizer for what’s to come below. Nutmeggers have been throwing shade as Massachusetts for this ridiculous notch for a long, long time. 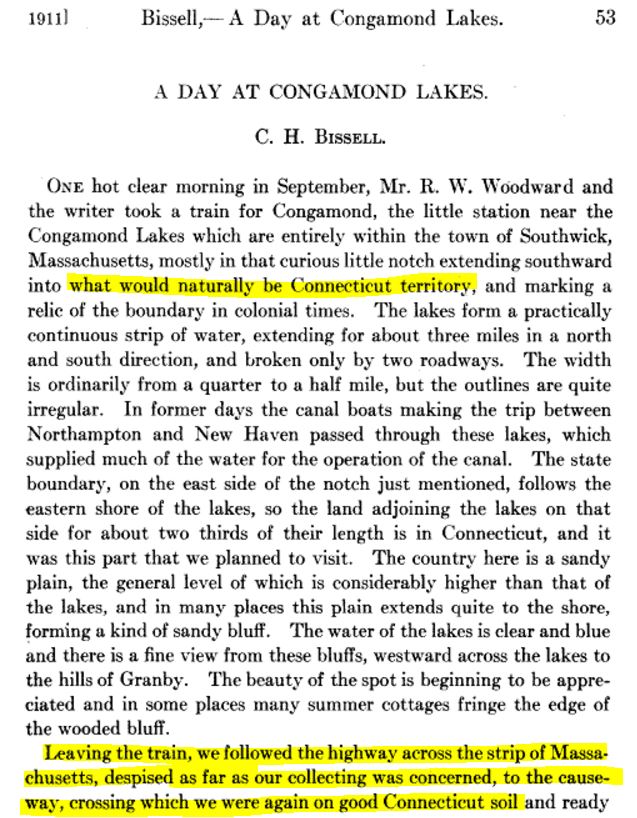 I set out to explore just what Connecticut is missing by conceding this polyp to our northern oppressor. I crisscrossed the Jog a few times, seething with anger. A beautiful lake, a historical society museum for a Massachusetts town that should be, cheaper gas, liquor stores open on Sundays… Aaaargh! Who do these fake Bay Staters think they are? 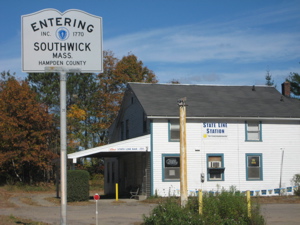 All the facts below are from here. There’s no quick and easy way to tell the whole story, so bear with me. If you’d like more detail – and you should – click through that link.

The beginning (as far as white man is concerned): In 1642 Massachusetts hired two surveyors, Nathaniel Woodward and Solomon Saffery, to survey the boundary between that colony and Connecticut. However, the point they established as the western end of the line was disputed by Connecticut and ultimately found to be eight miles too far south. According to a pamphlet in the vertical file at the State Library (CTMQ Visit here), for the next 60 years, “surveyors hired by either Connecticut or Massachusetts set a number of boundaries favorable to the colony that employed them. The only result of these surveys was increased animosity between the two colonies. Even a joint survey in 1702 did little to settle the affair. 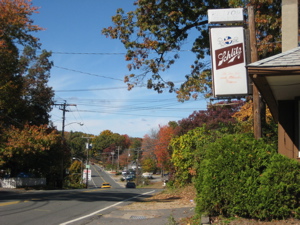 This bar should be in CT… but judging by their beer of choice, MA can keep just this little bit.

Yeah, so okay, Connecticut apparently stole a few towns from the dirty Massachusettans (I’m avoiding the insulting name we actually do call them – being a family blog and all) – “To complicate matters, the citizens of Enfield, Somers, Suffield and Woodstock, unhappy with Massachusetts’ high taxes, applied for admission into Connecticut in 1724. These towns claimed they were included within Connecticut’s original boundaries and were entitled to return to that state.” 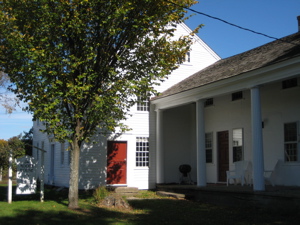 The Southwick Historical Society Museum at the Moore House. Boycott!

Naturally, Massachusetts refused to give them up, but in 1749 Connecticut voted to acquire them. A verbal battle raged for years, reaching crisis proportions. Appeals to England were ignored, since that country was embroiled in the Seven Years’ War. “In 1768, Massachusetts laid formal claim to the four towns; however, Connecticut did nothing about the edict and continued to govern them.”

So half of our northern border was still a mess and we were about to fight the rotten Limeys. What happened after that? 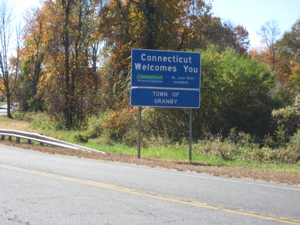 Entering Connecticut at Granby… about 2.5 miles too far to the South! Take Back the Notch!

That’s just the beginning of the story… but CTMQ readers demand the whole story. Alas, there is an excellent telling of the story by one Reverend Edward R. Dodge. He wrote a nice 13 page piece of the injustice (he lives there… In the Jog), pieces of which I will excerpt, without his permission – because he’s a slimey state stealer, that’s why. 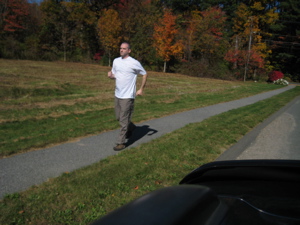 Me. Doing the “Southwick Jog.”

“talked to some of the people whose families had lived there for many generations. Almost without exception everyone had a theory or story to explain the “pocket” town. One such story or theory says that the lakes and western land adjoining the lakes fall within Massachusetts control because the source of these lakes is the north lake which is unquestionably within the Massachusetts border. Thus it was felt that all the lakes should be within Massachusetts jurisdiction by virtue of possession of the source. Another popular story is that the early surveyors who ran the line were a bit under the influence of alcohol when they arrived at this point. Consequently, they laid the line too far north. Rather than go to the expense of running the line again, a compromise was made, giving Southwick some of Connecticut territory. 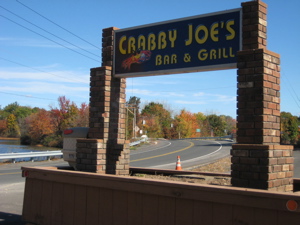 Crabby Joe’s about 300 feet from Connecticut (see the small green “Suffield” sign in the background – but it should be Connecticut. You think Joe is Crabby? Take BACK THE NOTCH!

See, I told you some people think that. The real real story is excellent, and really should be read in its entirety. Here’s another good excerpt:

“about all the[ surveyors] had to ‘go on’ was the Massachusetts Charter which stated that the southern border of Massachusetts ran west to the Pacific Ocean, …from a point three miles south of the most southerly branch of the Charles River.”

You see how greedy they are up there? Sheesh. So these guys DID get lazy in 1642 and took a latitude reading at the Charles, then partied it up on a party boat down and around and up the Connecticut River. They took another latitude, but were horrifically wrong, several miles too far south into undisputed Husky Territory. 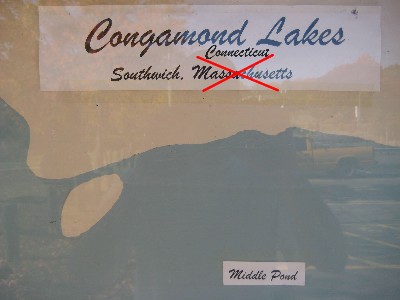 The border was disputed back and forth, year after year until 1695 when two dudes surveyed the land OVERLAND, the proper way, and found the 1642 lines way out of whack. The two states fought and couldn’t resolve the dispute. Woodstock was caught up in all of this, as was northern Granby, because residents were being forced to pay Massachusetts taxes. Finally, in 1702, Massachusetts allowed a Massachusetts guy to join a Connecticut guy in another border survey and those guys found the 1695 Connecticut guys to be dead on.

But lo, Massachusetts refused to accept their findings because, well, because they are jerks like I’ve said. The states continued to argue for several more years, and in 1707 they “petitioned the Crown” in England. (Risky for Connecticut, since they were pretty much the only independent colony in many ways, thanks to our groundbreaking 1662 Charter. 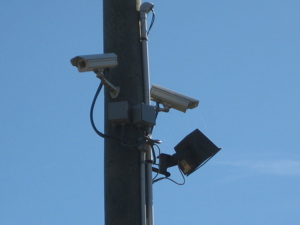 Note: The biggest boatlaunch area is rife with security cameras. Hmmm… You think they’re worried about the coming Take Back the Notch Revolution?!

1713, a new line was drawn. Several years of bickering ensued over the land Massachusetts was losing. Enfieldians and Suffieldians were caught up in this mess, not knowing to whom they were beholden. They would be part of Massachusetts for many more, tax-heavy years. Then, after some European and Indian wars, the Woodstockers whined to Connecticut and we said, “Okay you hippies, come on over to the good guys.” Enfield and Suffield followed suit. Massachusetts laughed and laughed.

They continued for years levying taxes and holding elections in those three towns. More wars, the matter of a little revolution, and now we were over 100 years of disputing this border. We also had residents of south Southwick, MA whining that they, too, wanted some of our Connecticut pie. They did this in 1774 and since Boston had a few other more important matters on their hands, they were like, “Whatever” and let it go. 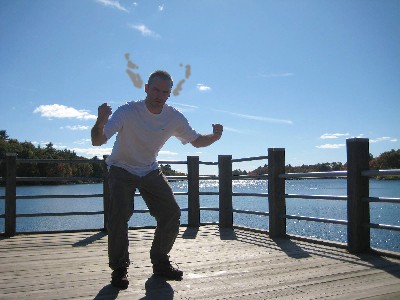 >Boiling mad about this injustice at the beautiful ShouldBeConnecticut’s Congamond Lakes!

Now we’re up to (only) 1793 (!) and the Jog was still a mess. The residents wanted to be cool, but Massachusetts was tired of Connecticut stealing their land (as we did, according to them, already – so they weren’t relenting. More time went by and the craziness continued! Massachusetts proposed slicing the disputed land in half at the Congamond Lakes, but CT wasn’t hearing it. MA threatened to re-open the 1713 disputed land and demanded CT accept their proposal once and for all. 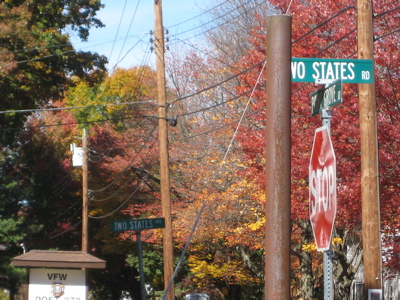 Check out this nonsense! That’s Two States Road (CT) in the foreground and Two States Avenue (MA) behind. They both go to the same beach. TAKE BACK THE NOTCH!

Connecticut was not frightened into accepting Massachusetts’ proposal and for several more years, arguments, replies, studies, reports, propositions, and counter- propositions flew back and forth between the two colonies. Finally, in 1804, an agreement was reached which seemed equitable to everyone involved. The southern half of Southwick was to be divided at the lakes, with the line running from the southwest corner of West Springfield, down by the lakes to the ancient south line of Westfield and then to the ancient southwest corner of Westfield. That partitioned the 2.5 mile area at Congamond Lakes with Massachusetts receiving 5/8 of the disputed parcel along the west shore and Connecticut receiving the remainder, along the east shore.

The territory east of the lakes was ceded to Connecticut, while that to the west fell under Massachusetts’ jurisdiction. Thus, after one hundred and sixty-two years of border uncertainty, the line was finally established. 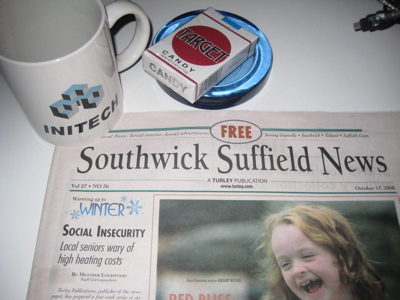 A free paper serving both towns?! What kind of crapola is this? What do we care about what happens in MA? AARRGGHHH!

In the 21st century, the battle still rages. Some Connecticut residents with boats in the lake have been taxed by Massachusetts for their docking fees or something – Because Massachusetts owns the water. The New York Times explored this area in 2001. The Massachusetts towns are doing things to benefit them – to the detriment of the Connecticut towns.

On and on it goes. At least there are no such issues to the east over at the Longmeadow Baby Jog, which I also explored here.

The majority of the factual stuff is from here. It’s an excellent read.
Another good one
MA borders, old timey style
Awesome geography quirks blog (links to the Jog)