After thoroughly enjoying Comstock, Ferre & Co. (The oldest continuously operating seed company in the US), Damian and I walked across Main Street to the Wethersfield Ancient Burying Grounds. 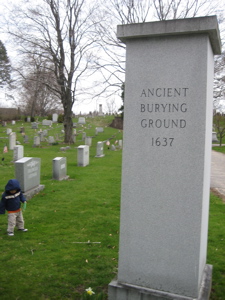 Located behind the First Church of Christ in Wethersfield, it shares space with a normal modern cemetery. The church, founded in 1635, is one of the oldest and largest Congregational churches in New England – And George Washington worshipped there.

Today’s church was built on the site of that first church in Wethersfield; the present brick structure was constructed in 1761-4. But we weren’t there for church, we were there for slave gravesites. We trudged up the hill looking for them, but even though Damian was a total gamer, we never found them. 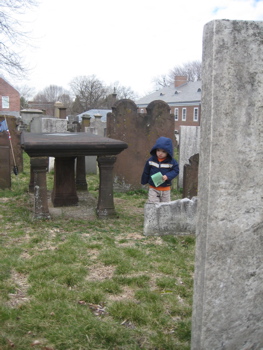 But here’s the story:

Quash Gomer, who purchased his freedom in 1766 from John Smith for 25 pounds, is interred in the Wethersfield Ancient Burying Ground. The inscription on his stone reads: “In memory of Quash Gomer a Native of Angola in Africa, brought from there in 1748 and died June 6, 1799. Aged 68 years.” Burials of Americans of African descent in the Wethersfield Ancient Burying Ground were segregated.

Indeed… our dreams of finding it were quashed.