Often, when winter hiking, my wife asks me if I’m sure I’ve dressed warm enough. “Yes,” I always say, and then rattle off the list of gear I have on/with me. After attending the Whale Bowl AHL hockey game on the most ridiculously frigid night of the year – and remaining alive and intact – she has agreed to never ask again. Because if I can deal with standing stationary in the wind tunnel known as Rentschler Field, with single digit temps and 50+ mph winds through, overtime and, a stinkin’ shootout, I think I’ll be okay walking through the woods on a winter’s day. 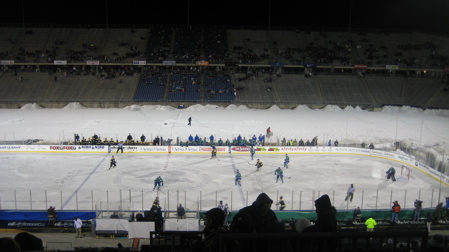 That’s not to say I’m still not an idiot. Well, a hockey-loving idiot anyway. [Note: This page became a bit of a rambling essay on professional hockey in Hartford, which wasn’t my intent when I started out. Oh well.]

You may be asking why I feel this event warrants a CTMQ page. Fair question; but one with a good answer. The Whale Bowl was a special and unique sporting event that has really only been tried a few times around the continent. The NHL has had great success with their New Year’s Day Winter Classic games and some college teams have mirrored the idea of outdoor games – also with great success. But the American Hockey League (one step below the NHL) ain’t the NHL and college hockey in Michigan is a religion. However, as local readers know, Hartford used to have an NHL team – the Hartford Whalers. 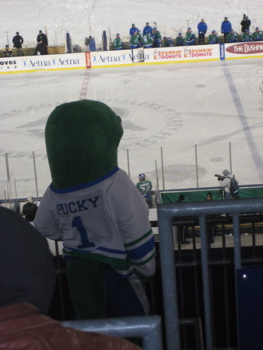 Long gone but definitely not forgotten by former fans and season ticket holders, the void left by the mighty Whalers still hurts the city to this day. No need to get into all the reasons they left and the years and years of trying to lure the NHL back. I’m a huge hockey fan, and although I bleed orange and black (Philadelphia Flyers), and I’ll always bleed orange and black, I would LOVE to have the NHL back in town. I’d buy season tickets again on day one. But it just ain’t happening, no matter how much great guys and promoters like the Baldwins want it to happen.

So we have this crappy AHL team that no one cares about. The have been known as the Hartford Wolfpack for their entire existence until late 2010 when they changed their name to the Connecticut Whale, they actually won the Calder Cup in 2000. That’s the AHL’s Stanley Cup and… and no one cared. But when Howard Baldwin came back to town and began to run things, people DID start caring again. 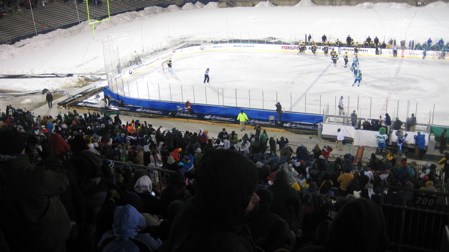 I felt the name change was corny. The Whalers were affectionately known as the Whale locally. Since the NHL didn’t allow the AHL team to adopt the old official Whalers name (which is weird, since there have been – and are – teams with their big brother mascots like the Providence Bruins, Scranton/Wilkes-Barre Penguins, Texas Stars, etc.), the Baldwins went with the “Connecticut Whale.” I hate the cartoonish whale mascot too, for what that’s worth. The old Whalers’ W with the whale tail and the H (for Hartford in the negative space) was nothing short of genius. Cartoon whale with hockey stick getting eaten by a big C is stupid on several levels, but whatever.

Blah, blah, blah… I know. You don’t care. You just want to get to the part about me freezing my ass off. 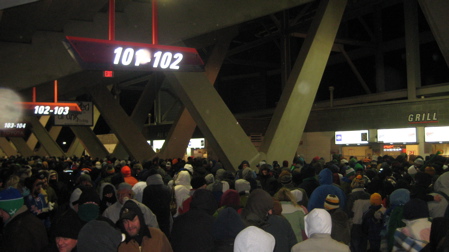 The Whale Bowl was a week-long hockey extravaganza held outdoors at UConn’s football stadium in East Hartford. There were local high school games, college games, open skating sessions, pee-wee games, mites, midgets and adult league games held over the week. None of them were well attended at all, but really, the only game that mattered would be the Connecticut Whale vs. the Providence Bruins on the Saturday night. Reports had ticket sales pegged at over 28,000 with thousand more expected to walk-up.

Never mind that half that number (totally my guess) were “sold” to local companies to give away. 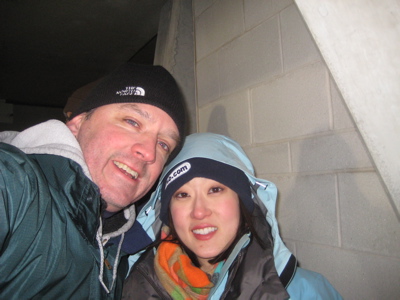 My local CBS news interviewer, Karen Lee, who vowed to move out of New England after this night

As the weather got worse and worse that Saturday, not only could you not give away the tickets, you couldn’t pay people to take them. Which is really a shame; I really do believe at least 20,000 people would have showed up if… if they didn’t schedule the game at NIGHT in February in a sort of horseshoe stadium. By late afternoon, the winds began picking up and by game time, there were sustained gusts over 50 mph. Oh, and the temperature dropped to around 10 degrees Farenheit. I don’t believe in wind chill, but it’s safe to say it was cold. Really, really cold.

But I loved it! Even though I went to the game alone (go figure), I had a blast. More people were leaving than going in when I arrived, having realized that the wind was just a bit too much and the only place to really hide was in the super-heated bathrooms – which were packed all night long. And people with little kids? Forget about it. And that was a shame, really. 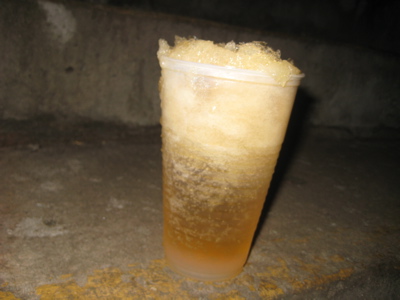 Reports say that maybe 8,000 people showed up, but even that number was creative. (This included the people who had come to the games earlier in the day, when the sun was shining.) I’d say there were 4 to 5,000 in the 1st period, and it dropped by a thousand each successive period. It was brutal. The wind would blow the ice shavings around the ice so badly that there were times we could barely see the ice.

The $10 dollar Rentschler beers froze into slushies within a few minutes. I took a walk around the stadium and at the end that was catching the most wind, my exposed cheeks froze in seconds – so much so that I couldn’t speak. It felt like my eyes froze over at one point too. I realized at that point that this was probably the worst weather I have ever voluntarily stood around outside in in my life. And I’ve done that a lot, trust me. 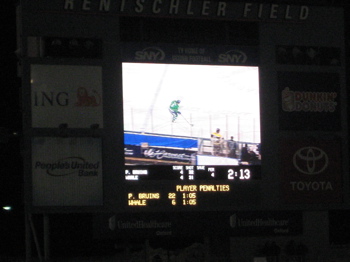 I even got interviewed by Karen Lee of the local CBS affiliate. Her angle? That I appeared to be the warmest person there! I probably was, actually, but my face and toes were still rather cold. It never aired, which bummed me out (I said stuff like, “I’m just a big hockey fan and this is hockey” and “Go Flyers” because I’m a dork) but I got a nice picture with Karen, who was shaking like a leaf and quite frankly appeared pretty terrified of the wind and cold.

And then the game went into overtime. Hooray. At that point, there were maybe 800 of us still there. Then came the fake hockey (the shootout) at which point MAYBE 500 people stuck around. Annnnnnnnnnnnd Providence won the shootout and I went home. 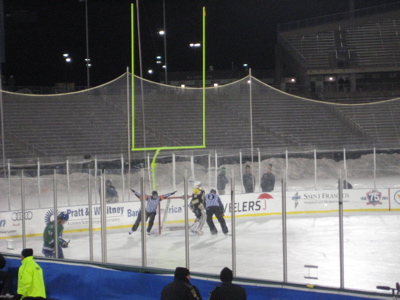 The final Whale shootoutter misses and we hit the aisles

It was a great idea that attracted a lot of attention to the newly named team and hockey in general. The ice looked pretty good and the stadium is a pretty decent place to watch hockey. I had fun, but man, I don’t begrudge anyone for not showing up.