[2016 Updates: Much to update here! First, I revisited half of this trail with my sons in March of 2016 as part of the DEEP’s Sky’s the Limit Challenge. Totally different trail experience here. 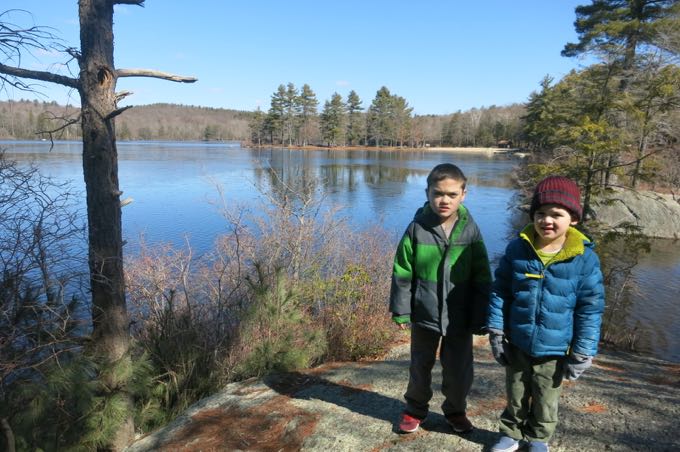 I’ll explain the second update in a couple paragraphs. See you then.] 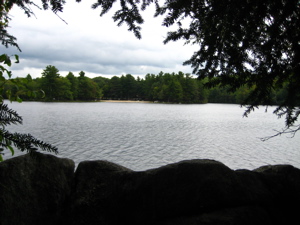 Rounding out my trio of Torrington Trails is the incongruously named Wolcott Trail. In fact, it’s more than a 25 mile straight-shot drive south to reach Wolcott, after passing through all of Torrington, Harwinton, and Terryville. I’ve searched in vain for an explanation and have yet to find one. It’s not like Wolcott has anything worth commemorating. Just kidding.

The entire trail is located in Burr Pond State Park, which leads me to suggest they rename this trail the Burr Pond Trail, but CTMQ doesn’t have that kind of pull yet. In due time, my friends, in due time…

[2016 Update: Apparently, “due time” has come. In the Summer 2016 issues of the CFPA’s Connecticut Woodlands, this issue was addressed. Get this: This trail is actually the Walcott Trail, not the Wolcott Trail! 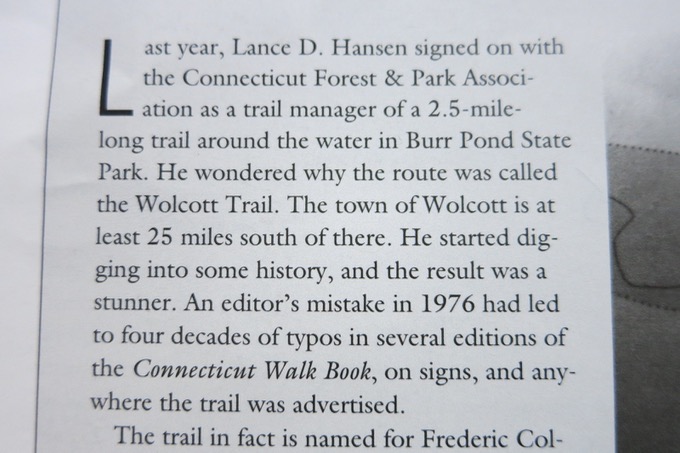 The trail, it turns out, was named for a Frederic Collin Walcott, a local man with some history in the area. He started the Great Mountain Forest in Norfolk, served on the state fisheries board and went on to become a US Senator in 1929. He worked with FDR with teh Civilian Conservation Corps and later, CFPA Philip Buttrick, who you’ll read about below, established the Walcott Trail after having stayed at the Walcott CCC Camp.

After some official business, new trail steward Lance Hansen and the CFPA have officially changed the trail’s name to Walcott. And so, for the rest of this page, I shall follow suit. 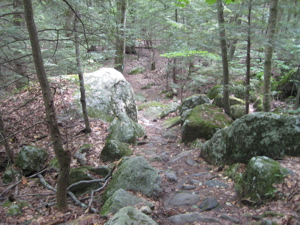 After having hiked all three Torrington Trails (The John Muir Trail and The Alain and May White Trails are the others), I can state with confidence that this is the one you should do – if you can only hike one. For one, it’s a nice, easy 2.5 mile loop with three parking access points. For another, it contains some interesting history and the prettiest scenery of the different areas.

I began my hike into the park from the Muir trail via the Muir/Walcott Connector Trail. The connector trail is just an old woods road blazed blue with a white dot: 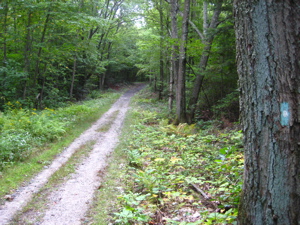 I could almost see my car tantalizingly up Starks Road – and I say tantalizingly because I was quite tired after the down and back I’d just completed and thought for a second about calling it a day and returning another time. But I didn’t; I turned north (right) into the woods and began the Walcott Trail proper. 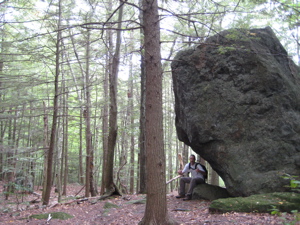 I headed clockwise and was immediately impressed by the many glacial erratic boulders dotting the hillside. The trail here in the southwestern portion of the park definitely has a “Northwest Connecticut” feel to it: Pine groves and glacial boulders. If you’ve hiked around the state, you know what I mean. There are distinct differences between what I consider the three regions of our state: the eastern lowlands, the central basalt ridgelines, and the northwest hills. 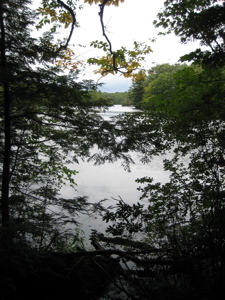 A short ways in and I was treated to a massive boulder with a decent overhang. Nice. Shortly thereafter, I got my first views of the large Burr Pond and, of course, took too many pictures. The trail here hugs the shore as it dips and dives around an inlet.

Soon, I reached the more popular areas of the park where I actually saw real live humans. The trail crosses below a dam and then ambles through a picnic grove before crossing the parking lot and then on back into the woods. I stepped off-trail for a bit, in order to check out the beach and facilities.

This pond one looks okay to swim in and I don’t recall any news reports of E. coli here as is so common at other ponds in the state. And really, it’s pretty cool the way the beach is backed up by a pine grove studded with small glacial debris: 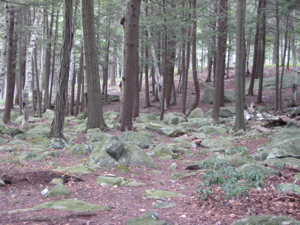 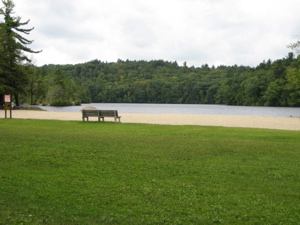 As natural as Burr Pond looks, it was man-made: In 1851, after the Paugnut Indians “decided to no longer use the lands for hunting (did they have a choice?), farmer Milo Burr placed a dam across the confluence of several mountain streams impounding 88 acres water for power. The tannery and three active sawmills erected downstream consumed the finest pines and oaks for miles around to meet the needs of lumber production. The clearings became homesites and Connecticut’s industrial leadership was further strengthened. 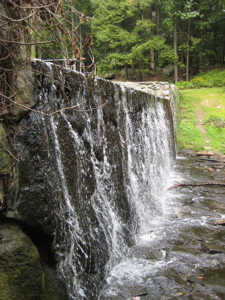 Yes, a very pretty state park was borne from 19th century industrial destruction. It was designated a state park in 1949. There is a nice historic sign along the trail as it leaves the parking area north. On it, I learned that Burr Pond was actually named for John H. Burr, whose estate it was that the state received the land from. And yes, he was a Milo Burr descendant.

The trail crosses a few streams over the next half mile – streams that were historically important apparently: Gail Borden (a dude), discoverer of the process of milk preservation by evaporation and condensation, built the world’s first condensed milk factory here, in 1857. The new milk product proved to be of great value, particularly to the Union Army during the Civil War. Fire destroyed the mill in 1877. Supposedly, a bronze tablet marks its site, just below the falls. 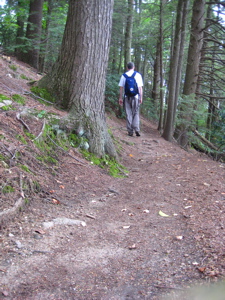 I say supposedly because I never found that bronze tablet, darnit. Anyway, Gail Borden’s name is familiar to you because his name, Borden, went on to become a giant in the condensed milk (and other) business. While this factory, and a second one failed, he eventually (obviously) succeeded later in New York. He acknowledged this in his gravestone epitaph: “Borden’s gravestone epitath is “I tried and failed, I tried again and again, and succeeded.”

Later, I visited the site of Borden’s first condensed milk factory – the world’s first! nearby

More Borden facts? Try this one on for size: Borden died in 1874 in Borden, Texas. He was a humble Justice of the Peace in the recently formed Colorado County, where Borden is located. His experiments in Colorado County included canning beef. Ironically, the railroad charged more for transporting canned beef more than it did beef “on-the-hoof”and while it was feasible, it wasn’t profitable until after Borden’s death. He also worked on a “Beef Biscuit” which wasn’t well received.

Also, out in the panhandle, there’s Borden County. Borden actually never set foot in Borden County, nor the County Seat, Gail, which was named for him posthumously as well. Enough? Enough. 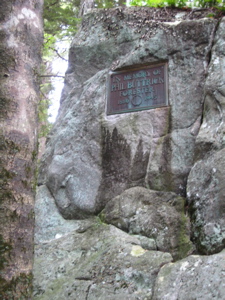 I did find the bronze plaque affixed to a large boulder, noting one Philip L. Buttrick. During the 1930’s, Buttrick and the CCC developed this place to be what it is today. (He also served as secretary-forester of the CFPA from 1923-1929.)

From the northern tip of the pond, the trail turns south, never leaving the pond’s shore for a while. The trail is very pretty here; very soft and very flat. It also has many little signs describing the various trees along the way – a product of an Eagle Scout project. Before long, I was quickly at the place where I had began my Walcott Trail hike (this is a very quick 2.5 miles) and headed out of the park back to Starks Road and my waiting car.

I’d definitely put this walk on a list for families interested in a little hiking and picnicking. Just don’t slip into the pond in the winter – Burrrrrr. 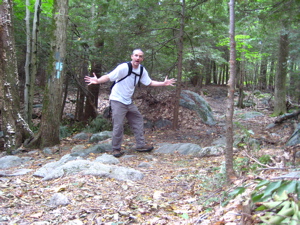 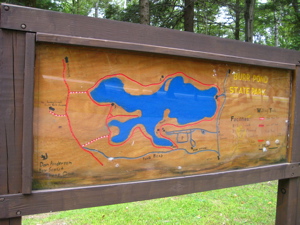