Stadion Cafe is no longer open.

Ed and I arrived on New Britski’s Broad Street about half an hour before the 3PM kickoff of Poland and Ecuador. I drove up and down the length of the Little Poland section of the city and Ed marvelled at just how Polish the area is. English words were very few and far between. Which was excellent for our purposes!

(Note: The Travel Channel show, “Taste of America with Mark Decarlo,” has a whole 15 minutes or so on Broad Street Polish sausage makers.) 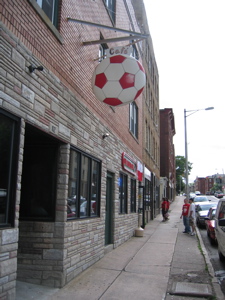 I parked and we sheepishly entered a local sports bar called Stadion Cafe. Once through the door, we were instantly transported to Warsaw. Props to Ed for accidentally wearing Polish colors which gave us instant credibility. The fact that we were the only two people out of the 130 or so in there that didn’t know a lick of Polish was initially a bit disconcerting, but we figured it out. The beer list, menu, and all the signs were in Polish. People said, “Excuse me” in Polish. The bathroom signs were in Polish. Their broadcast of the World Cup was in Polish. Polska, Polska, Polska. Here is my impression of Polish:

“Beesh beesh schwa schwa ehh behhh beesh besh.” The bartender girls didn’t even know english and we had to ask a friendly patron to help us out when ordering. Of course, we didn’t know what we were ordering, as the beer names were all zeshehsh or crzshsh or perhaps we’d like some ehhbshheh. So we just tried them all.

The atmosphere was awesome (though things turned a bit sketchy later on, as you’ll see below), the crowd was riled up… THIS was what I was hoping for. So turn on your local public radio station playing polka, and let’s go! POLSKA! 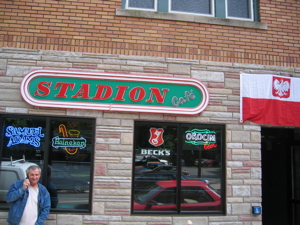 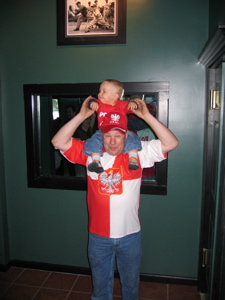 Does this guy look of sound mind enough to be carrying his son like that? POLSKA!! 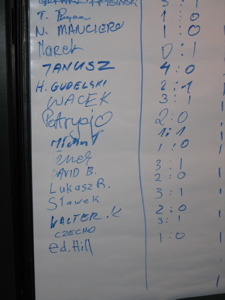 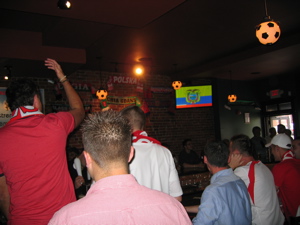 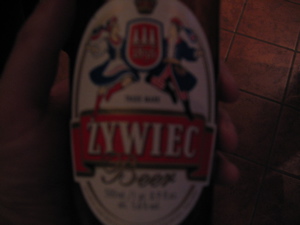 The first (true) pint. It’s pronounced zchzwhhz, which is nice and easy to say after a few of these 6% bad boys. POLSKA! 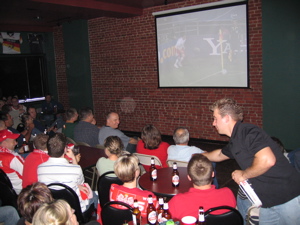 The adjoining packed room. Note all the empty bottles of Zchzwhhz. POLSKA! 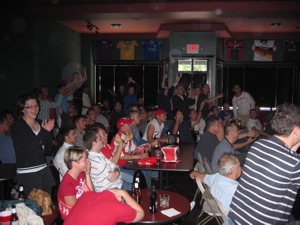 I’ve learned that soccer fans get cheer and clap “opportunities.” 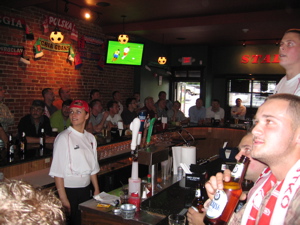 The bar area and bartender who didn’t even know 2 words of English. POLSKA! 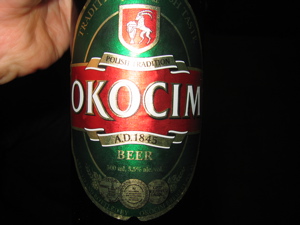 This would be Oczzchicshm beer. 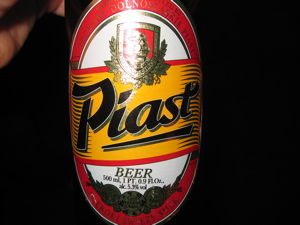 And this is Peeshzzsht, of course. 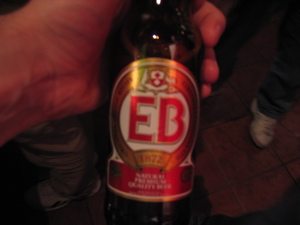 EB” Beer? Nope. This is “EhhBetsh” 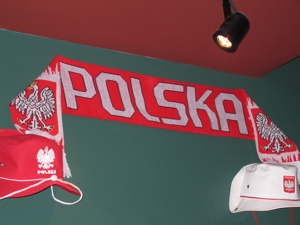 With Poland down 2-0 shortly after halftime, things began to get a bit more interesting. No, I wasn’t expecting violence or anything, but I’ve now learned that the Poles celebrate victories by drinking more AND mourn losses by… drinking more. At this point, we gained a few new friends including a young kid named Greg – which was probably a lie. Greg is a self-described “Polish Hooligan.” Greg later told us that he is, “not a fascist, but…” – a phrase which always ends badly in my experience. In this case, Greg was just making sure Ed and I weren’t Jewish. Oh, okay. 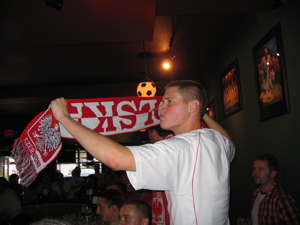 Greg the proud and angry Pole. 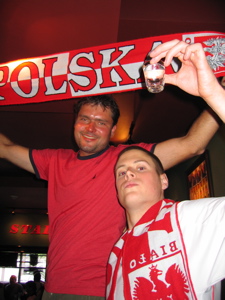 Shots of vodka always do the trick! POLSKA! 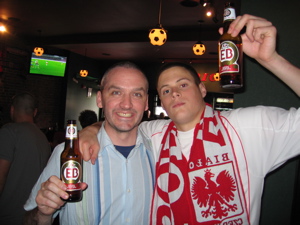 I’m scared. POLSKA! (As if I had a choice at this point.) 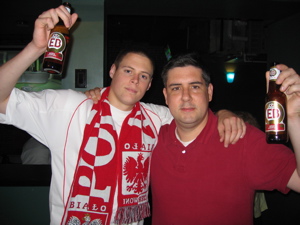 Actually, Greg was a nice guy as were ALL of the people we met. Why are we all holding up our beers in these pictures? That’s annoying.

After the loss, Ed and I exited the bar and decided to grab some quick dinner somewhere on the street. Listen, we had a great time and I would revisit Stadion Cafe in a heartbeat. Just that one little Jewish thing – hey, the kid said something about his grandfather dying in WWII at the hands of the Germans and… Oh what the heck, this was America 2006! That stuff was 60+ years ago now! Let’s just forget all about that and – 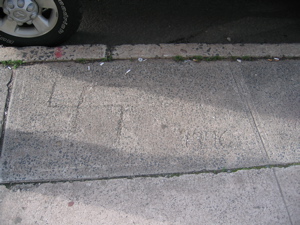 Yup. The saddest part about this is that it looked rather worn as though it’s been in the cement for a good long while there on Broad Street. At this point a few giant Aryan youths stumbled by with bloody lips and swollen eyes. Ah, yes, a good old fashioned Nazi fight! Ed and I ducked into the first place we figured sold food, but judging by the menu, we had absolutely no idea what the hell they had in the kitchen. 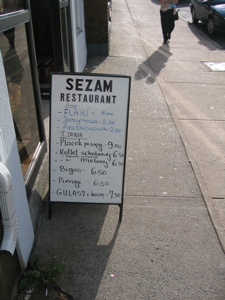 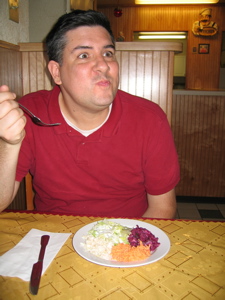 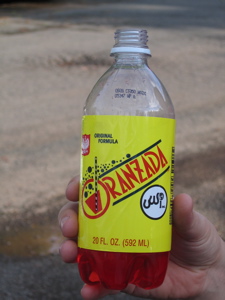 Wash it all down with some delicious Oranzada!

Ok, funny story about the next picture. I just wanted a shot of the menu that we had to order from. Not really interesting, but when I took the picture, some old guy walked in front of my shot. He was not happy about this and asked me (in Polish, so I’m assuming), “Hey you scrawny little jerk! What are you doing? Do you want me to kill you?” I nervously laughed, showed him that I deleted it, and he went on his merry way. And I thought they all hid out in Argentina. 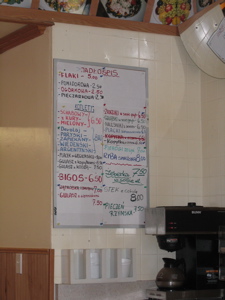 Not exactly a picture worth getting beat up over, eh?

That’s it! Poland lost, but Ed and I won because we are much richer for the experience. Swastikas, fascist drunks, and nazi restauranteurs aside, we had an absolutely great time. Everyone was really nice to us (helps that we’re white guys of course), the Polish beer was good, the Polish food was (pretty good) – we ordered (what else) Cheese and potato pierogies and we survived our first experience with Polish hooligans. In fact, we were invited to the next Poland game versus Germany; we were promised that there would be many more Polish hooligans out in force and that their hatred for Germany was such that one could expect some serious violence that day. Too bad we’re busy that day, huh? What excitement would tomorrow bring?