Writing up a museum visit on a dreary, icy-stormy day in December is always a great way to pass the idle time. Looking at the pictures and uncovering memories from a hot July day to write said story is a bit strange. But I have no excuse for the delay, really, other than sheer laziness. 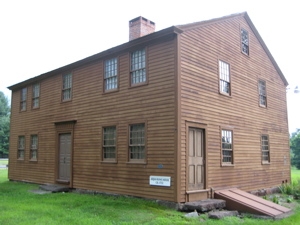 However, the good news is that the Salmon Brook Historical Society, which owns and operates the four historic Granby museum properties in Salmon Brook Park, have updated and added to their website in the interim, which is almost all copy and pasted throughout this report. In other words, the difficult task of remembering all that I saw six months ago (let alone digging out my notes – if I even took any; I forget) just became a whole heck of a lot easier! Hooray for us all! 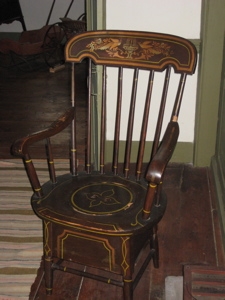 This comfy rocker has a built in chamber pot. And that’s fantastic.

The Abijah Rowe House is the oldest structure left from the original Salmon Brook Settlement. It was probably built by Nehemiah Lee (circa 1732), sold in 1750 to his son-in-law Peter Rowe, and then to Peter’s brother, Abijah Rowe, in 1753. The Rowe brothers were both blacksmiths, and may have made some of the hardware in the house. I am always curious how these places decide upon which owner to name the house after centuries later. In this case, I’m guessing because they have the most “stuff” from the Abijah years. 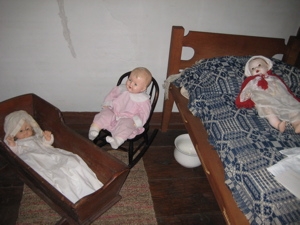 After Rowe’s death in 1812, his heirs sold the house to Elijah and Joseph Smith in 1813. It remained in the Smith family until 1903, when it was sold to Fred M. Colton. Mr. Colton’s daughters, Mildred Colton Allison and Carolyn Colton Avery, presented the Rowe House to the Salmon Brook Historical Society in 1966. Thanks sisters! (Eh, it was probably just too drafty for them.)

The house has been restored to an early 1800’s appearance. Much of the furniture is from early Granby and not the house itself. The paneling and corner cupboard in the south parlor are original to the house. Their are small parts of the house that are original, and a bunch that are “authentic restorations” of the 19th century. However, the front door is an outstanding original feature of the house. 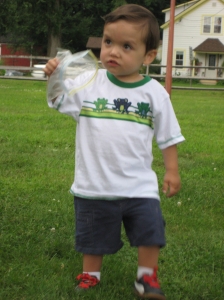 I took a tour with another wonderful guide. Hoang and Damian chose to sit this tour out, opting instead to continue playing out in the grass with our friend Lisa and her daughters Hannah, Leah, and Rachel who had met up with us. Lisa’s husband, Tim, actually joined me for the tour which was cool because he a) asked the same type of goofy questions I do and b) served as a diversion while I took my creepy antique doll pictures like I am compelled to do. 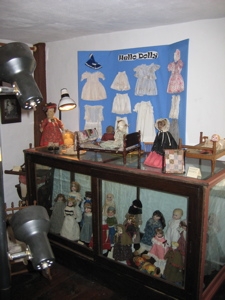 We toured the kitchen, the pantry, the formal living room, and the dining room all on the ground floor. There was nothing extraordinary about the rooms; fairly standard Connecticut Historic House fare. So we followed our guide up the impossibly skinny stairs to the second floor.

Their website says, “The second floor also houses a room with Victorian toys, from a wooden tricycle to an exquisite doll house, along with a charming collection of antique dolls.”

“Charming?” Not to me they aren’t. Longtime CTMQ readers know that I am drawn to old dolls for one reason: They freak me out. 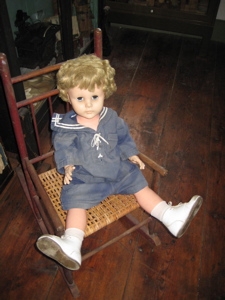 Take the foppish kid in the chair, for example. His (or is it a her?) stick-straight legs are abnormally wide beginning up in the pelvic region. The always-dead eyes yearn to be saved from a lifetime of torturous, pelvic breaking pain.

How about this one: 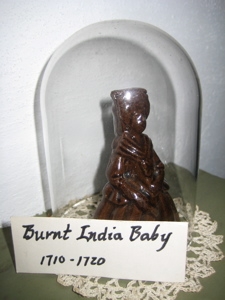 I received an email from Dana Twiss of the Maine Historical Society shedding some light:

I read your statement about being confused about the “Burnt India” baby which is displayed under a glass globe. It’s hard to tell from your picture due to the glossy look and the glare, but might the baby have been made of rubber or vulcanized rubber, which becomes very hard like plastic? India by itself is sometimes used as another name for rubber, as in Indian rubber, and burnt would refer to the vulcanization process, the definition for which from Webster’s 1913 edition is “to change the properties of, as caoutchouc, or India rubber, by the process of vulcanization. Vulcanized fiber, paper, paper pulp, or other fiber, chemically treated, as with metallic chlorides, so as to form a substance resembling ebonite in texture, hardness, etc.

Of course, now we need to know what caoutchouc means: unvulcanized natural rubber. 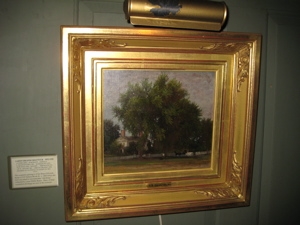 Nice oak tree. But not the awesome Dewey-Granby Oak in town.

We checked out a couple bedrooms and yes, there was a wool spinner and the beds had the ropes to “sleep tight.” The historic house BINGO was complete.

Back downstairs, there were a few things hanging on the walls of note: 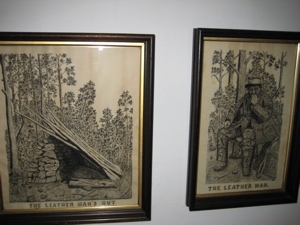 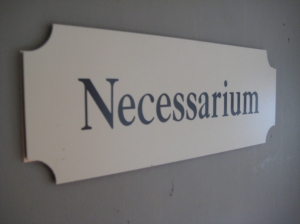 This is the name of the room where you do your necessary evacuations.

And that was pretty much that. Abijah Rowe did nothing of importance in his life, nor did anyone else who owned this house back in the day. This is another case of “Old house survives, becomes a museum as result.” Which I’m totally fine with. It’s SO Connecticut. 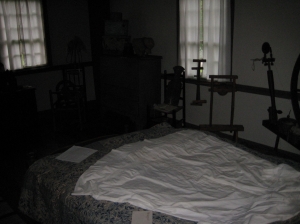