Get Olph Your Butt Already
Wethersfield (Google Maps Location)
May 28, 2009

This was perhaps the easiest pun-title on all of CTMQ. It’s been in my head for years and after finally visiting this easily accessible historic house museum and learning “Buttolph” is actually pronounced “Butt-off,” I was ecstatic. I would have bet that the Butt part would be more of a Beaut or Butte like Butte, Montana. Juvenile sensibilities: Satisfied. 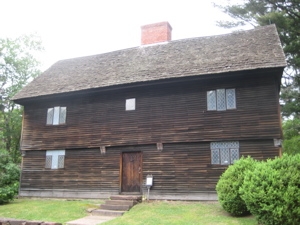 I’ll be frank up front: The Buttolph-Williams House has absolutely nothing unique about it when compared to the other old early 18th century historic house museums dotting our state. Nothing. Well, nothing except the interesting door-knocker I guess. Oh – and the clock-jack. Read on…

BUT! Or rather, BUTTolph! There is a very compelling reason to visit this place, but I suggest you do some homework first. Homework as in, read a book. Specifically, Newbery Award Winner (for distinguished contribution to American literature for children in 1959) The Witch of Blackbird Pond by Elizabeth George Speare. (Seriously, if you have a 12 year old reader in your family, I’d strongly suggest this book. It’s really pretty good, cover to cover.)

Your library probably has a few copies and it’s a pretty quick 223 pages long. Go ahead, this post will still be here when you’re finished. Just bookmark this page and we’ll regroup in a week or so. Enjoy! 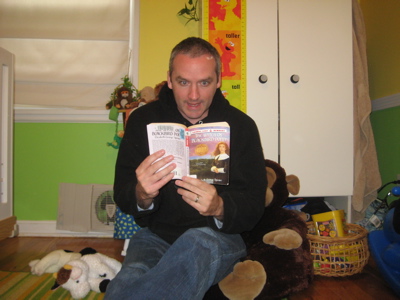 Get you own Monkey Chair

That was pretty good, now wasn’t it? Liar! You didn’t read it… But you really should some day.

So, you ask, what does that book have to do with the Buttolph-Williams House? Everything, actually. You see, the medieval appearance of the exterior and the romantic interiors inspired the local author to use the Buttolph-Williams house as the setting for her novel. This story of a young orphaned girl from Barbados who arrives unannounced to live with her Aunt and Uncle in Wethersfield, addresses the issues of ignorance, illiteracy, prejudice and superstition in a small, 17th-century settlement. 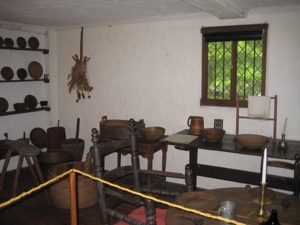 I hadn’t read the book prior to visiting the house, but I understand many Connecticut kids are forced to do so. Then ones near Wethersfield are probably forced to visit the house too, which isn’t so bad because the curators have purposely set it up to reflect certain scenes in the book. Things like the bucket to make soap from lye and the flax wheel. The witch of the title lived alone over in the Great Meadow which is still there, near Wethersfield Cove – where there’s a museum I’ve visited dedicated to the river trading operation Wethersfield was built upon. 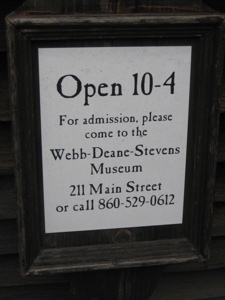 I visited with Dan, the journalist who was profiling me for a magazine article. No one was home initially, so we went a block up to the large Webb-Deane-Stevens Museum to inquire about a tour. The folks who run that show caretake the Buttolph-Williams House, so a nice woman named Amy agreed to give us our tour. Off we went.

Originally thought to have been constructed by David Buttolph, it is now believed that this house was built by Benjamin Belden, who purchased the property for 70 pounds in 1711 and sold it for 245 pounds in 1721. The structure was probably finished by 1714. Even though no Buttolphs ever lived there, no one has any plans to change the name of the house museum though… Which I agree with. Buttolph has such a ring to it. 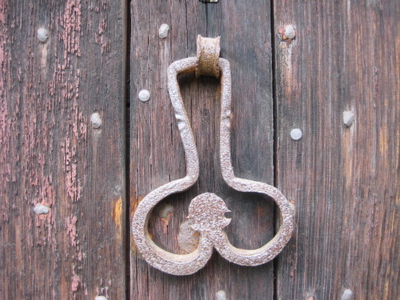 Entering the front door, I tried to hold back on my juvenile jokes but I couldn’t resist noting the absurdly phallic door knocker. In “The Witch of Blackbird Pond” Kit notes upon arriving at the house with the boat captain that brought her there, “The captain lifted the iron knocker and let it fall with a thud that echoed in the pit of the girl’s stomach.” No mention was made of the captain joking about the phallic knocker, but those were Puritanical times I suppose. 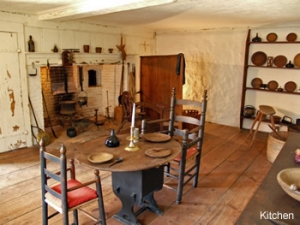 There are only four rooms in the house. We checked out the kitchen/dining-sewing-sitting room first. All the familiar artifacts were there: The spinning wheel, the massive hearth, the cards to spin flax, the settle bench, the butter churner, the table setting. A couple cool things were the wooden plates and animal horn spoons that were somewhat translucent and the lye log maker thing. The latter is only notable because Kit, in the story, laments the backbreaking labor soap-making requires. (She whines a lot about her chores, but then again, that’s all they did back in the day.)

The kitchen area was furnished and equipped by Frances Phipps, author of Colonial Kitchens, Their Furnishings, and Their Gardens.

I mentioned the “clock jack” earlier. While Amy noted that these things were only owned by the super-wealthy and very most likely not former inhabitants here, it’s a cool little instrument. I’d love to have taken a better picture of it, but was scolded for taking a prior one. Sigh. Let a man do his work! (The good pictures here were kindly “provided” by the museum’s website, as are the more intelligent descriptions.) 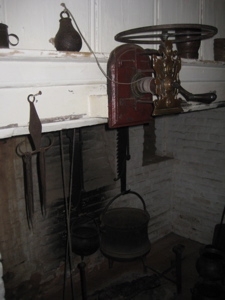 Anyway, you can see it is attached above the hearth above, to the left. Using clock mechanisms of the day, the user would wind it up and a counter-balanced weight would slowly descend, causing the attached chain to turn the spit slowly over the fire. Each cycle lasted 20 minutes upon which time the cook would wind it up again and let it go. That, my friends, is pretty cool for the time.

We shuffled over to the other ground floor room, which contained a few pieces of period furniture. One was a dresser made by local Peter Blinn whom, it just so happens, is also mentioned in the “The Witch of Blackbird Pond!” Although the current interpretation of the interior captures the spirit of Pilgrim life in New England in the 17th century, its historic importance is more as a document of the work of an earlier generation of American collectors and preservationists than as an accurate recreation of early colonial life. Originally, the rooms would have had less furniture with only a few high style examples. The early colonists were also fond of color and painted both their furniture and paneling with decorations. 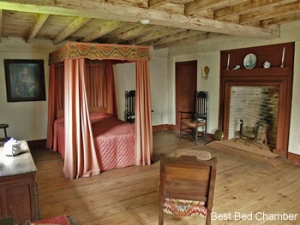 Upstairs there are two bed chambers. One is spartan and fairly true to the time period. The other one, however, is not. The best bed chamber was designed and decorated by Katherine Prentiss Murphy, one of the twentieth century’s most renowned antiques collectors. As a result, the fabrics and quality of the bed are nothing like the spartan rooms the original inhabitants would have had. A deal was struck with Ms. Murphy that they’d get to house and show her collection if she’d donate it.

It’s interesting to note that there are no windows along the back of the house at all. Windows were very expensive in colonial America and had to be shipped in from England. (This is also mentioned in the book.) 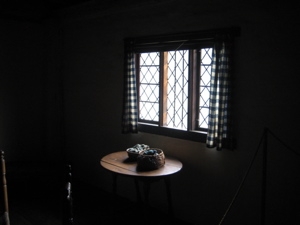 The Buttolph-Williams house was opened it to the public in 1951. The building was restored under the direction of pioneer restoration architect and “interior design virtuoso,” Frederick C. Palmer. The stone foundation, the chimney stack and fireplaces, the original hewn-timber framing, and much of the interior woodwork, doors and floorboards are original. The four inch overhang at the second story level on the front and side elevations and the decorative brackets were discovered during the restoration in 1947 when the modern clapboards were removed. There was also sufficient structural evidence to determine the location, size and shape of the original doors and casement windows. Reproduction doors studded with nails and windows with diamond-shaped panes secured by leaded mullions were installed in frames the size of the originals. 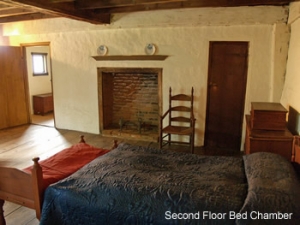 Our visit wrapped up and Amy went back to the Webb-Deane-Stevens museum. 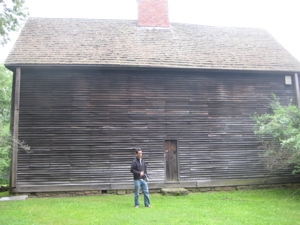